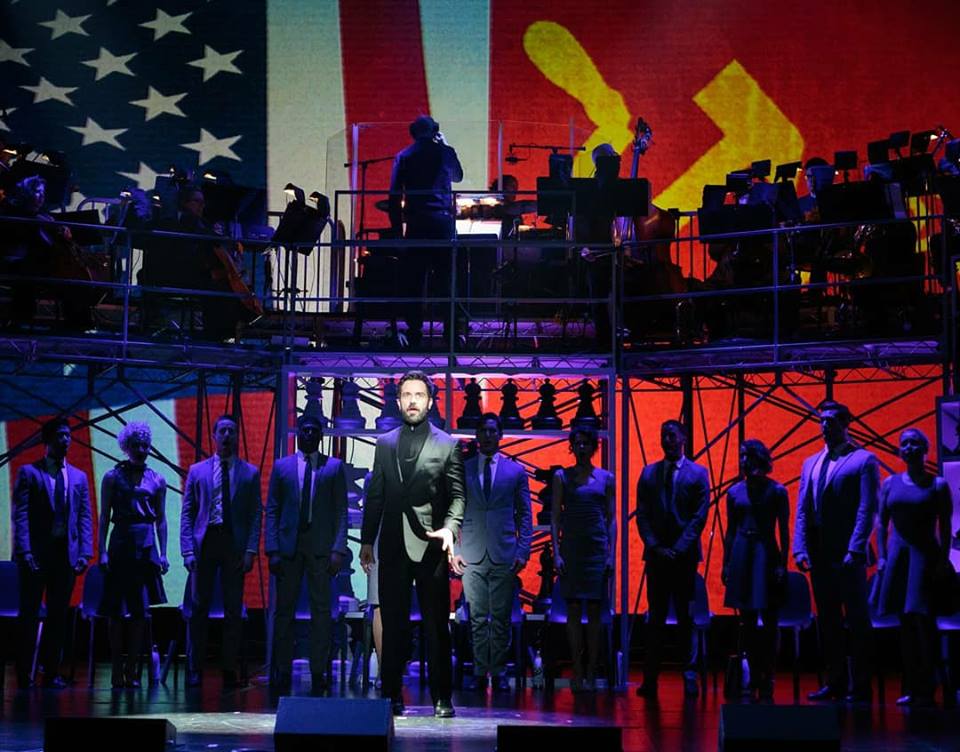 2018: the entire world— of Washington DC— is on high alert. No one can deny these are difficult times, especially if you’re trying to snag a ticket into the pre-Broadway trial engagement of Chess now appearing at The Kennedy Center for its limited five-day run. With a new book by Danny Strong, the musical— originally conceived by Tim Rice, Benny Andersson, and Björn Ulvaeus— is more potent than ever in its political charge, addressing a simple international game of world-champion chess not as an allegory but as a play-by-play war-room stratagem of The Cold War. Directed by Michael Mayer and featuring renowned names like Raúl Esparza and Ramin Karimloo, this hardened and sharply-focused political drama draws attention to the ruthless corruption of both the CIA and the KGB during the peace-talks and negotiations of one of the world’s longest, silent wars.

Presented as a highly-effective staged concert, with books in hand and concert chairs, this production of Chess, rises above the implied “12-chair performance” that so often accompanies a ‘concert’ version of a production. Complete with choreography by Lorin Latarro, which is at times somewhat cramped in the restricted space of the stage and occasionally out of sync with the rhythm of the music, the show delivers the full experience of a Broadway musical. The new book by Danny Strong reorganizes the order of the show— reverting to a previously staged addition which puts major numbers like “One Night in Bangkok” in the second act and introduces numbers like “Merano” in the first. The larger shift in focus is the political corruption thriving between CIA Agent Walter (Sean Allan Krill) and KGB Agent Molokov (Bradley Dean). The way the Walter character is re-imagined— playing an active operative in this political scheme— juxtaposed against the inherent scheming of the Molokov character creates a deeper, darker edginess to the piece and gives it a high-octane charge in the political vein.

The other newest feature of note to the performance is the shift, rather increase, in the role of Arbiter (Bryce Pinkham.) Instead of arriving to merely officiate the match— and in this new re-imagining there is only one match between Freddie and Anatoly— the character of the Arbiter starts life as the narrator, guiding the show along as it unfolds until he self-references actively joining the tale as the aforementioned character. With this play-by-play narrative figure, the political influence becomes the targeted focus of the performance, rather than the chess match, the character’s intrapersonal entanglements and the show’s overall backstory. Rather than seeing the tragedy of Florence’s character’s forced refugee status, the audience is drawn into the corrupt threat issued by the CIA character to revoke it if she refuses to get a handle on Freddie’s outbursts. There is a more intense focus on Freddie’s mental instability, calling attention more readily to his mental illness, as well as how such a character flaw is readily and willingly manipulated for political gain.

The political charge of the show is augmented by Projection Designer Darrel Maloney, whose projections are fitting when you can see them through the scaffolding. There is something to be desired in Scenic Designer David Rockwell’s layout of the stage space, although the curved shelving units— all of which hold chess pieces— are a nice touch, they’re visually obstructive to the overall projected background. Lighting Designer Kevin Adams reminds the audience that despite the higher political focus of this new retooling, the show is still a rock musical. Brash blinking lights often in garish colors accompany the grittier numbers, especially “One Night in Bangkok.” Costume Designer Clint Ramos does an extraordinary job of making the characters appear to be pawns in the overarching game of the show. The ensemble are outfitted in gray, mostly suits and some strange dresses, while the players themselves appear in stark black. Only Florence and Svetlana are given colors, and the irony is not missed that Florence appears in blinding bright blue while Svetlana, the wife of Anatoly, appears in rich, screaming bright red.

Ultimately the ensemble, comprised of some dozen performers, is strong, full of vocal panache, and well-suited to carry the intricately complex musicality of the show. Despite some sound balance issues, where the exposed pit— raised above the stage on a visible scaffolding— was consistently playing over the vocal performers and ultimately drowning out their lyrics— the overall tone and quality of notes being sung— even when words were lost in the sound-balance issues— was striking.

Sean Allan Krill and Bradley Dean as Walter and Molokov respectively, were brutal in their approaches to their characters. While Krill had a deadpan, dry sense of humor, he was equally as ruthless as Dean’s character when it came to delivering political threats. Though Krill’s voice was never a feature in the musical numbers, Dean— who led the brutal “The Soviet Machine” in the second act as well as contributed one quarter of “The Quartet (A Model of Decorum and Tranquility”— had a robust sound that perfectly matched his rogue character.

Bryce Pinkham, as Narrator turned Arbiter, was lively and engaging both in his narrative moments and in his moments of arbitration. With a strong tenor, his feature number— though somewhat theatricalized— “The Arbiter” was on par with the other vocal powerhouse performances given throughout the course of the evening. Giving a slightly underwhelming performance by comparison to the others, Ruthie Ann Miles’ Svetlana lingers in the shadows— scripted not to enter until the second act— but does find her moment vocally in “Someone Else’s Story”, a moving, albeit quiet, solo number.

With a powerhouse belt that matches the ferocity of the character, Karen Olivo as Florence is as dynamic as she is fierce. Showcasing a sublime versatility— both in her initial tender approach to Freddie and later her sweetness with Anatoly as well as her bombastic outbursts of attitude when the situation calls for it— Olivo is a matched queen to the role. With multiple solo features and duets, Olivo delivers a stellar performance that is well-deserving of the ovation she receives upon entering the stage and again after “Heaven Help My Heart.”

The two dueling players, the two major hot-shots— Freddie Trumper (Raúl Esparza) and Anatoly Sergievsky (Ramin Karimloo)— live up to the critical hype charged in their characters as well as that which accompanies the named players tackling the roles. Both Esparza and Karimloo are passionately driven in their approaches to the characters, both delivering raw, unadulterated emotional expressions in their various solos. Esparza annihilates “Pity The Child #3”, his featured solo in the third act where the world unwinds from within his soul. Karimloo does the same with the Act I finale, “Anthem”, eviscerating the character through song with unfathomably emotional connection. The pair are practically unstoppable on the stage and faced-off against one another, supercharge the show.

A rewarding experience, moving and deeply impressive for its political approach to actual history, this re-imagining of Chess is one for the books and will no doubt be a great success on Broadway.

Chess plays through February 18, 2018 as part of the Broadway Center Stage initiative at The Kennedy Center in The Eisenhower Theatre of The John F. Kennedy Center for the Performing Arts— 2700 F Street NW in Washington, DC. For tickets call the box office at (202) 467-4600 or purchase them online.