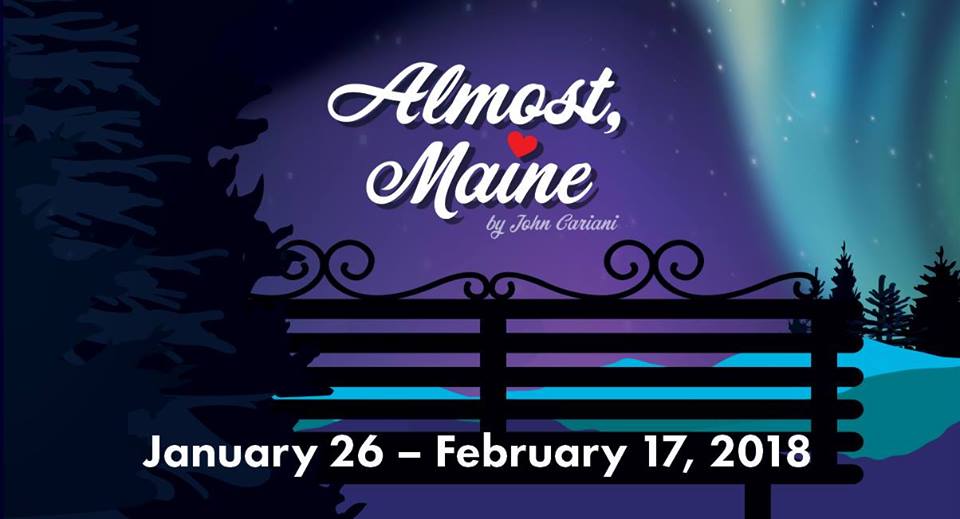 “Love recognizes no barriers. It jumps hurdles, leaps fences, penetrates walls to arrive at its destination full of hope.”

What is love? Why does it happen? How does it grow? When does it end? The residents of a little area way up north – Almost, Maine – have the same questions, and Director Bob Kleinberg brings their stories to the Greenbelt Arts Center just in time for Valentine’s Day. Why “Almost” Maine, you ask? Apparently, the small group of inhabitants of this unincorporated town never got organized enough to file the paperwork, so they are almost a city, but not quite. However, they are still susceptible to the effects of Cupid’s arrow.

In eight separate scenes (plus a prologue, interlogue, and epilogue,) Almost, Maine explores many facets of falling in and out of love – sometimes in symbolic or seemingly magical – ways. While some scenes seem fantastical, others are more realistic, and it gives the piece a somewhat uneven tone as a result. However, the ease with which the eight actors craft their individual characters make up for this. In order of appearance, Rob Allen as the bemused Pete and Christine Smith as Ginette are delightful in the connecting scenes. Christine Smith also appears as Marvalyn in “This Hurts,” and she does a wonderful job playing a woman in a failing relationship trying to connect with a man who doesn’t feel pain. Rob Allen at first seems awkward in “Sad and Glad,” but you soon realize that it’s a brilliant character choice, and his Jimmy becomes endearing. Jenna Jones Paradis is sad, sweet, and more than a little kooky as Glory in the first scene, “Her Heart,” and is a completely different kind of kooky – the humorous kind – in her portrayal of the waitress, in “Sad and Glad.” Ryan Willis deftly plays triple duty as East in “Her Heart,” Chad in “They Fell,” and Dave in “Seeing the Thing,” and shows his depth as an actor.

In “Sad and Glad,” Pamela Northrup has amazing facial expressions as she runs into an ex on the night of her bachelorette party. Northrup’s ability to reveal what Sandrine is feeling about the whole situation is a delight to watch. She is also exceptional as the Woman in the “Story of Hope,” playing a much different character, highlighting her versatility. In “This Hurts,” Jason Kanow sensitively plays Steve, a mentally challenged man with congenital analgesia and does a complete about face in his portrayal as Randy in “They Fell.” He also very charmingly portrays the Man in “The Story of Hope.” Emma Earnest is just that in her characterization of a woman trying to let her lover go in “Getting it Back,” and skillfully plays a completely different person in “Seeing the Thing.” Finally, rounding out the cast is Win Britt. As Lendall in “Getting it Back,” Britt is asked by Earnest’s character to take back all of the love (in plastic bags) he has given her during their relationship and, he does so in amusingly confused fashion. He takes Phil in “Where it Went” in a much different direction, equally successful.

All actors show depth and range. However, there is one topic that needs to be broached. It is not clear if the script calls for it or if it’s a deliberate choice, but in a few scenes, an actor suddenly grabs another actor to steal a kiss – in one case, multiple times – in a vein that judging by the script was meant to feel romantic, but gave off a non-consensual and uncomfortable vibe instead. This affected my enjoyment of the play to a certain extent. The director may want to consider a gentler approach going forward.

The show is set in proscenium and is seemingly very simple when the actors first appear – only a bench in a snowdrift in one area of the stage, and a chair with a backdrop of stars in another. The large poles in the space are painted like trees. However, the set changes with each scene in elegant and surprising ways. For instance, a complicated double-sided set piece is hidden in the wings and rolled out to represent the outside of two different houses for back-to-back scenes. Generally speaking, the sets and costumes help the audience feel the kind of chill that only happens when you’re 160 plus miles north of Bangor, Maine in the middle of winter. Worth mentioning is the fact that this production marks the debut of the fabulous new stage lighting bought through donations to the Greenbelt Arts Center, and the lighting was one of the ‘stars’ of the show!

While this reviewer found this show to be somewhat of a mixed bag, due to the situations mentioned earlier, the excellent acting and largely charming tone of the piece make Almost, Maine well worth the seeing. Bring your significant other while you’re at it. Happy Valentine’s Day!

Almost, Maine plays through February 17, 2o18 at the Greenbelt Arts Center— 123 Centerway in historic Greenbelt MD. For tickets call the box office at (301) 441-8770 or purchase them online.