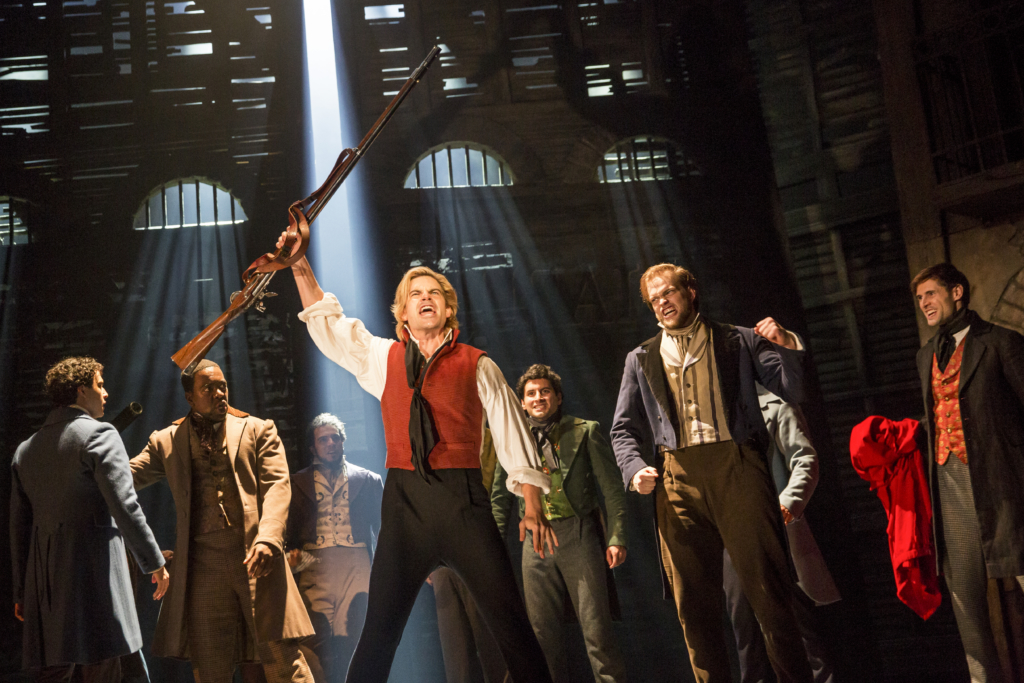 Welcome, Monsieur, sit yourself down, and meet the best touring production in town! As for the rest, well none of them is— quite as impressive as this show of Les Mis. The National Theatre has the distinguished honor of hosting the current touring production of the infamous and iconic Broadway musical Les Misérables this festive holiday season and there’s none better a show to welcome to the stage at this season of year, when everyone else is touting the more saccharine shows of the season. Directed by Laurence Connor and James Powell, this evocative retooling follows in the footsteps of the recent Broadway revival, staying true to the tale while presenting new special effects and honing in on those visceral moments of connection between characters that populate the story.

Whether it’s the licensing of the current production or Director Laurence Connor and James Powell’s choosing is unclear when it comes to the current way the lyrical recitation of the performance is being handled. Perhaps it is an overall mistrust of modern day audiences to fully digest a three-hour opera where every line is sung, but regardless the reason, this steady threading of various spoken words (and in some cases extremely staccato singing) detracts from the overall stunning beauty of Claude-Michel Schönberg’s music and Herbert Kretzmer’s lyrics. This, and the pop-modern persuasion of both the Jean Valjean and Eponine characters, are the only two places where the production truly finds fault, and even then, these choices are likely only to be noticed by those deeply steeped in the world of theatre. The raging screamer-rock-star tenor approach laid into the Valjean character and equally poppy-modern vocal sound over-laid to the Eponine character juxtapose poorly with all of the other vocal choices and overall arrangement and progression of the show. This is not to speak ill of either performer, who both have stellar sounding voices for that quality of sound.

Aesthetically, the production is striking; there is a profound blend of projections realized by Fifty-Nine Productions flawlessly mixed with illuminations crafted by Lighting Designer Paule Constable. The way these innovative projections are juxtaposed against the overall set and image designs of Matt Kinley creates a believable and visually inspiring experience for everyone watching. Constable’s continual use of shadow and light, playing with both during heightened emotions throughout the production, augments the nuances of character relationships throughout the performance. This is most notable in the love triangle of Eponine, Marius, and Cosette, wherein the former appears in shadow while the remaining lovers are highlighted in warm, welcoming whites.

It should also be noted the strobing effects, which are synched to perfection with Sound Designer Mick Potter’s whizzing bullets and other sounds of battle unfolding at the barricade, are most enthralling, bordering on the edge of frightening. Other extraordinary uses of lighting (and Connor and Powell’s precision staging and blocking to align perfectly into that lighting) include the rise of the barricade students in the background during “Empty Chairs at Empty Tables.” Fluid, smooth, and perfectly executed with nothing but the striking visual created in this moment, it is one of the more divine moments of light-play featured in this production.

Directors Laurence Connor and James Powell pull a great deal of the story’s focus into the minutia of character relationships. From the onset of the performance the high-strung mortal-enemy-style tension between Jean Valjean and Inspector Javert is palpable all because of a carefully crafted look shared between them in a moment of stillness upon the stage. These intense eye-locking moments, which occur most frequently between the two leading male characters, but also with others throughout the performance, are how Connor and Powell hone in on the critical dynamic of developing relationships in this telling of Les Misérables, ultimately heightening the overall experience for theatergoers, both those who have experienced the show before and for those of whom this is their first viewing.

Vocally astonishing, despite the misplaced modernity of the tenor-rocker sound which dominates Jean Valjean’s numbers and the diva-pop sound which diffuses its way into Eponine’s numbers, the numerous members of the ensemble answer true to the show’s question: “Do you hear the people sing?” In soul-burning jubilation, with unmitigated passion, and exceptionally blended harmonies, is the resounding answer. Whether growling their bitters during “At the End of the Day” or reconciling the angelic ending during “Finale”, there is an inexplicable fortitude, creating the sound of hundreds among a cast of just over 30. Standout performances among this ensemble include the rowdy Grantaire (Matt Moisey), whose comic shenanigans provide quite the chuckle in this otherwise dramatically heavy opera. Though it must be said that Moisey sticks the harsh screws to the Enjolras character during his harrowing (and pitch-perfect) verse of “Drink With Me.” Little Cosette (at this performance Zoe Glick) and Gavroche (at this performance Julian Emile Lerner) also deserve mentions of praise; Glick, for her dulcet and delicate rendition of “Castle on a Cloud” and Lerner for his punchy pluck in the overall approach to the character. His scene at the barricade is one of the most breath-taking in the most horrific fashion imaginable.

While shouldering much of the show’s comic relief, Thénardier (J. Anthony Crane) has a ghoulish grotesque side to his character that is ripe and readily revealed during “Dog Eat Dog.” Crane takes the grizzled, red-nosed silly-sot of a character that oft provides nonsensical shtick in the first half of the show, peels back the laughing layer of the character and reveals a revolting underbelly wrought with vile intentions of truth and grit. Crane, who plays opposite Allison Guinn (playing Madame Thénardier) is somewhat intentionally upstaged by her during their entire initial encounter. Guinn, whose character choice is a strong one, however ill-executed, digs into the gravelly range of her voice, growling out lines both while speaking and singing, and at times takes the larger-than-life caricature that she has created with The Madame and makes her unpalatable.

With a hair-poof as high as the conflagration he’s inspiring amongst his fellow students, Enjolras (Matt Shingledecker) exhibits true character progression from the sensible leader of the students to the bombastic master of the rebellion. Shingledecker is firm of voice and takes a rapid track of growth from idealist to man-of-action. His solo features during “ABC Café” and “The People’s Song” are particularly memorable shows of his vocal tenacity. With an attitude primed toward revolution, it is delightful to see the way he spirits the students to march— in a believable circle rather than in some hackneyed block-formation— at the end of “The People’s Song” and again charges them with enthusiasm all through the never-ending barricade scene.

One of the more memorable “moments of emotional minutia” captured perfectly in this production occurs between Marius (Joshua Grosso) and Cosette (Jillian Butler) during “A Heart Full of Love.” The awkward fumbling over meeting one another is delicately draped over the lyrics of this number, with an intentional voice-squeak delivered by Grosso to further explore just how nervous his character is at that moment, making for the ultimate stage meet-cute. Grosso’s vocal capabilities are excellent, particularly when it comes to infusing raw emotions into his pensive portion of “Drink With Me” and his rendition of “Empty Charis at Empty Tables” evokes— as the colloquial saying goes— ‘the ugly cry.’ Butler, playing the winsome ingénue, rings true to the soprano nature of the character, delivering a pleasing sound with solid tonal consistency to numbers like “In My Life” and her unnamed segments following “Empty Chairs at Empty Tables” and those leading into “The Finale.”

Nick Cartell, who plays the protagonistic lead of Jean Valjean, vocally redeems the misdirection of the rock-tenor character tract that this touring production takes when approaching prisoner 24601, with his rendition of “Bring Him Home.” Clearer than solid eyes, this vocally pristine sound that Cartell emits, harbors a rich emotional sentiment that captures the essence of the struggle in that moment. Fighting the overall uphill struggle of the character (which includes sloppy fight choreography and general stoppered blocking in places) Cartell finishes produces a firm and steady replica of the iconic character. His most compelling moments are the those driven by the tightening tension shared with Javert, particularly during the uncredited “Confrontation” occurring just after “Fantine’s (Melissa Mitchell) Death.”

At this performance, the role of Javert was undertaken by understudy Andrew Love, but other than a note on the performance board indicating this up-swung shift in role assignments, there would be no way to tell that Love was an understudy stepping into the role rather than the actor assigned to the role originally. Love’s performance as Inspector Javert was nothing short of sensational; the rich emotional overtones, the deep astounding baritone, and the harrowing brutality with which he created the character all came together in one jaw-dropping performance that won several ovations from the audience, including a nearly unending one at the conclusion of his powerhouse solo “Stars.” Love, (whose sudden promotion meant The Bishop of Digne was beautifully sung and emoted by Monté J. Howell, at this performance) fabricated an unfathomable depth to the character, which drove the tension, and ultimately the plot where Jean Valjean was concerned, forward to the brutal conclusion. His moment in Act II— “Soliloquy” was truly a masterpiece; it captured the epitome of madness as it crashed down upon a logically ordered world and was delivered at the peak of Love’s vocal and emotional ability, truly remarkable without question.

To love another person is to see the face of God; this stands as the parting wisdom of the show and rings true with the talented cast that has been amassed for this national touring production of Les Misérables. Do not wait until the new year to procure tickets, for although the performance runs through the first full week in 2018, with as exceptionally well-done as the show is, it is unlikely that tickets will remain available for long.

Les Misérables plays through January 7, 2018 at The National Theatre— 1321 Pennsylvania Avenue NW in Washington, DC. For tickets call the box office at 800-514-3849 or purchase them online.