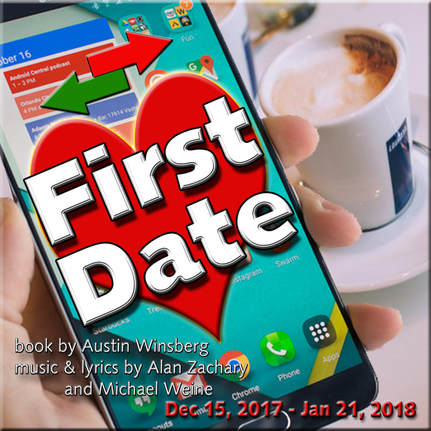 How does it start? With a meet-cute little musical number featuring the cast of seven. How does it last? Those same seven sing and dance and talk and laugh and cry for 100 minutes every Friday night, Saturday night, and Sunday afternoon* so that audiences all over Charm City can have an adorable feel-good alternative to the Christmas season’s traditional musical theatre offerings. Despite an unsuccessful run Off-Broadway, the current cast of the Spotlighters Theatre production of First Date is finding second life, and new wind to fuel of this fiery, funny rom-com of the musical stage. Directed by Fuzz Roark with Musical Direction by Michael W. Tan, this could be “the one” for you, if you’d just give it a chance.

With a subtle and almost non-existent set, house Scenic Designer and Scenic Artist Alan Zemla hones in on the minimalistic opportunities such a musical can present. There’s a monotone city skyline to indicate New York, or really any big city with skyscraper buildings, and little else by way of decoration, but this suits the show. Giving nothing distracting or largely identifying in the scenic layout— other than a table and chairs to indicate a restaurant— Zemla freely opens the relatability of the musical to everyone. This could be any couple, in any location, it could be you on your first date, on your blind date. This approach creates an easy connecting point for the audience, in addition to the overall relatability of the book and lyrics, by Austin Winsberg and Alan Zachary & Michael Weine, respectively.

The costumes, coordinated by the director and cast, follow suit and keep things casual. Casey and Aaron, the featured principals of the show, wear what any individual might wear out on a first date, and the others in the cast wear costumes that appropriately heighten their various characters. The visual aesthetic of the show that is fiercely on point is the lighting design by Al Ramer. As much of musical’s borderline campy comedy relies on the freeze-frame of live-action— wherein voices and characters of the main two protagonists speak to them, sing at them, and interact with them— there is something to be said for precision when it comes to laying out the lights. Ramer has a firm handle on this concept and often uses blues and cooler tones to drop into the pseudo-reality of frozen moments that liberally pepper both the book and score.

With a supporting ensemble quartet, it’s difficult to say who could be the front-runner, except of course when it comes to the scene-stealing shenanigans and nonsense of Matt Wetzel’s Reggie character. Fierce, sassy, and completely over-the-top, Wetzel’s Reggie is an honest scream when doing “Bailout Song (parts 1, 2, and 3)” and his overall reaction and overreaction to the situations at hand are hysterical. While Wetzel does play other characters, you find you won’t much care after meeting Reggie and the spastic insanity that accompanies him into each of his micro-moments, including the absolutely adorably hilarious encounter with the nameless Waiter.

Adam Abruzzo, Alyssa Bell, and Marela Kay Minosa comprise the remaining three-quarters of the quarto-ensemble and have wonderful voices to contribute to the show. Marela Kay Minosa, who is sassy in her own right when embodying ex-girlfriend Allison, should really be noted for hilarious appearance as Google during “The World Wide Web is Forever.” In addition to being ridiculous and precious, Minosa does a tiny tap-dance as this character (choreographed by Emily Frank) and wins the audiences’ hearts, despite the sheer absurdity of the number. Bell’s most memorable character is the Yiddish kvetching grandma Ida while Abruzzo’s is the Stoner Guy, though both have characters with meatier consistency to them, being Lauren and Gabe respectively.

The Waiter (Jim Gross) does indeed play an integral part in any first date. Gross’ waiter in particular is a knockout because of his ridiculously flashy attitude and overall explosion during “I’d Order Love.” Combining all the showmanship of a jazz number birthing a new-wave Vaudeville tribute, Gross pulls out all the stops— both physically and vocally— for this number, and ferments his place in “memorable moments of the show” during this scene. Gross also does an extraordinary job of capturing a local persona when momentarily stepping into the personality of the therapist, in addition to keeping all of his other characters uniquely separate from one another.

The show is truly a star vehicle for whoever is playing the role of Casey, in this case Lindsey Litka. With vocal chops that could easily sing the roof down inside Spotlighters, Litka is laying into the role with everything she’s got. Though the character is immediately defensive, frigid, salty, and caught with a serious case of Resting-Bitch-Face, Litka masterfully takes these character traits and spins them full force until transformation and growth occur, at which point she deftly and subtly begins to show signs of a tender, more vulnerable inner-Casey. This is most apparent in the emotionally blindsiding ballad “Safer”, which not only exposes a raw nerve of Litka’s portrayal but showcases her powerhouse vocal capabilities with rigor and grace. The number is “the heavy” of the piece, giving the show depth and perspective, (so too is “The Things I Never Said”, performed to misty-eyed perfection by Reed DeLisle as Aaron) whilst simultaneously giving Litka a chance to rock her stellar sound.

The chemistry, though awkward and slow to spark, between Litka’s character and Reed DeLisle’s character of Aaron, is the driving force of the production. It possesses an organic feel and naturally replicates every awkward moment in this history of “first date/blind date” history. While their only true duet is “Something That Will Last” there is more than one occasion where their voices meet and the sound created is a true tell to what potential could lie ahead for these characters. DeLisle, as the awkwardly nerdy Aaron, plays to perfection against the stunning Litka, raising the bar in a back-and-forth challenge as to who is going to deliver a more sensational performance. His patter racers include “First Impressions” and “In Love With You”, both numbers showcasing his range and ability as a vocal performer.

The show is perfect, even if a first date often isn’t. Who are we kidding— there is no such thing as a perfect first date. But if, like Casey and Aaron, you’re willing to take a chance and at the very least ATTEND First Date, who knows, this might become one of those shows that will last for you the way so many iconic musical that have come before it have.

First Date plays through January 21, 2018* (with a gap for Christmas, and adding alternating Thursdays) at The Audrey Herman Spotlighters Theatre— 817 St. Paul Street in the historic Mount Vernon neighborhood of Baltimore City in Maryland. For tickets call the box office at (410) 752-1225 or purchase them online.