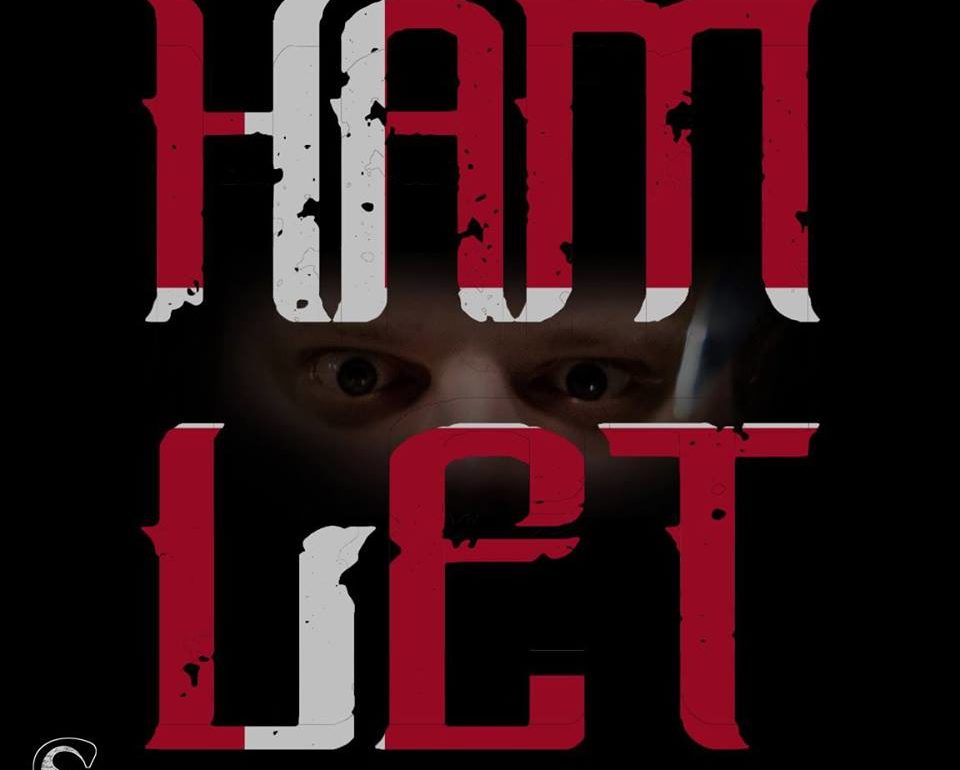 Suit the action to the word and the word to the action! The word is shows without intermission are the new trend and the action is to apply it Shakespeare. Susquehanna Shakespeare Ensemble is boldly running an endurance test— for both audience and ensemble— with the Bard’s most renowned tragedy, Hamlet. Directed by company founder and Artistic Head Marshall B. Garrett, this DIY-Fringe style production of the Danish Prince’s woe is surprisingly accurate in both delivery and conceptualization, giving the audience a bit more than the essence without dragging them through the full four-hour, five-act menagerie.

Garrett’s revolutionary attempt to strengthen the attention span of theatergoing audiences is paying off. If cinema goers can oft sit still through two or three hours of dead life, why can’t live theatre captivate it audience for a similar length of time. Running just over two hours and 15 minutes— including a few minutes of preshow interactive music with the cast (which still has the audience in their seats and stationed at the ready for the show to start)— Garrett doesn’t render the drama into its core, but rather trim away bits of the excess. Rosencrantz and Guildenstern are still featured; conversations that are often cut in favor of action are included in Garrett’s vision, but the pace at which he drives the ensemble keeps it all fitting well within that two hours and change time frame.

What makes this production unique, in addition to the non-existent setting, which is very reminiscent of the more experimental and avant garde fringe-edge theatrical engagements oft seen in the nation’s capital during the summer Fringe Festival season, is the seamless threading of music into the performance. With songs selected and original compositions composed by J. Andrew Dickenson, much like in the time of Shakespeare, music becomes the food of love, and play on they do! Dickenson, who doubles up in the show as Bernardo and one of the Players, takes on the guitar (and occasionally some rhythmic drumming) leads three other performers— Tess Garrett on drums (otherwise playing Horatio, and doing so with formidable presence of mind, as most of her active time is spent responding with vivid facial expressions to the exasperating and exhausting emotional tantrums of Hamlet), Daniel Bailin on keyboard (otherwise playing Laertes, Guildenstern, and Lead Player), and Brett Pearson on bass (otherwise playing Marcellus and Player King)— through various modern song selections that fit flawlessly into the realm of Hamlet. The most striking selection Dickenson features is just after one of the most stirring and evocative performances in the production— given by Lance Bankerd as King (Claudius, I’ve no idea why they’re not referring to him as such)— and Bankerd takes to the microphone with the aforementioned backing instrumentalists to deliver a harrowing performance of Johnny Cash’s “Hurt”, originally a cover of the song by Nine-Inch Nails. It’s bone-chilling.

These musical moments are the threads that draw these swift moving scenes together, carefully interspersed in places where text and longer bits of scenic rubbish previously existed. Garrett and Dickenson have chosen well, including various numbers, several of which feature the characters singing along to more fully express the musical tie-in. Garrett has blocked the production in the black box studio space making a curious use of all the entrances and exits. With little more than a few chairs for the performers, and a sidebar (because every Shakespearean tragedy needs alcohol), Garrett lets the DIY-BYO nature of the show run its course, leaving a modern relatability fresh on the palette for the audience to sample.

One of the delightful Easter eggs hidden in plain sight in the otherwise non-existent production design elements is the plentiful number of Hamlet and Shakespearean T-shirts worn by the cast as a part of their costumed garb. Fittingly appropriate is the basic navy T-shirt that states “I loveth Hamlet” (with the word ‘loveth’ in a big red heart) on Ophelia. Horatio dons a ‘Wittenberg University’ t-shirt with the collegiate logo looking something like a Yorick skull wearing a crown. See if you can count them all and catch who’s wearing what. Outside of these clever costume nods— and the dashingly sharp full suited outfit on ‘King’— there is little coming to the table in terms of sartorial selection, but this intentionally unhampers the burden of spectacle and aesthetic from the text, allowing for quickness of pace, conciseness of delivery, and an overall action-packed engagement of dramatic proportions.

The sword and overall fight choreography, created by Fight Choreographer Joe Grasso, is tight and delivered cleanly. Though the majority of it comes to fruition in the last moments of the show, its intensity is enough to make up for its scripted late arrival. This can hardly be counted as a fault against the production, or if it must, tis but a scratch. In fact the only thing that really situates itself against the production, aside from a few extremely minor line flubs— and thus is the nature of live theatre— is Garrett’s curious choice to cross-cast Debra McGuire as Gertrude and as Ghost (the dead King Hamlet.) While not a poor choice, it is certainly and unusual and a questionable one, if for nothing but the way the madness and ghostly vision scene in Gertrude’s closet plays out just after Hamlet has murdered Polonius. (Here there be spoilers— it’s Hamlet. Everyone dies. Except the one or two that don’t die.)

While Hamlet stares affixed at his murder weapon, seeming to see the ghostly apparition of his deceased father in its shiny reflection, Debra McGuire sits seated, one moment as Gertrude, the next hunched over and in upon herself, dropping her voice to speak as Ghost. It seems odd, though not entirely off-putting and it raises the question if there is another way to block this scene for a more dramatic effect. Because the notion of casting one’s true father and one’s mother with the same actor is one well worth exploring, but this is the one place where Garrett’s vision seems to fall just short of what he was shooting for. Further tinkering with this unique double casting could really delve into the psychology of Hamlet— both play and character— and ultimately give the performance a leg up with its edginess.

Because a great deal of frivolous lines have been discarded for time and momentum’s sake, an even greater deal of communication occurs in body language and facial expression. Kaitlyn Fowler and Daniel Bailin— in this instance as Rosencrantz and Guildenstern respectively— are a prime example of this. When first appearing, about to be addressed by King Claudius, there is a knowing glance of revulsion and disgust exchanged between them, completed with an eye-roll, to loudly state their distaste for one another. Fowler, who arrives at the show’s conclusion as Fortinbras, but appears prior to that as the Gravedigger, is most masterful in her role as the dirty working urchin. Shoveling at the floor with a music stand and focusing hard on the task at hand, the silly yet saucy lines slip over her tongue sublimely. But it’s the throw-down between Hamlet and Laertes where Fowler really gets to shine. Though her character says nothing in this moment, her facial expressions say everything as she stands idly by, rather annoyed that the whole rumble has broken out where she’s trying to work.

Bailin, who also plays Laertes, puts his temper in full swing when it comes to the initial throw-down with Hamlet, though does not let a rogue and fury-bent temper rule his characterization of the lad. Bailin is convivial, especially in the early scenes with Ophelia (Sarah Bouton Sickels), being the dutiful big brother and attempting to impart wisdom to his younger, and not-quite-as-innocent-as-he-believes little sister. Both Sickels and Bailin do an excellent job of steering clear Polonius’ (John Mulvey) never-ending fatherly wisdom, which is a bit more like a babbling brook of verbal diarrhea trying to appear in guise as sagely advice. Mulvey too dons an ironic Hamlet T-shirt beneath his dinner jacket, which adds humor to one of the character’s most memorable lines. Sickels, who takes to Ophelia with mindful ease, does quite a number during her madness scene, really painting the scene an inch thick with all of her cracked mentalities in that moment.

This brings us to the show-stealing player, King (Lance Bankerd.) Not only does his eerie and heartfelt rendition of Johnny Cash’s cover of “Hurt” in that otherworldly baritone-bass sound that he possesses leave tingles up and down the spine, but his overall portrayal of the character is quite disturbing. Choosing a seat along the sides of the play space rather than at the center or back is worth having a strange vantage point for the entirety of the two hours’ stage traffic if for nothing else but getting to watch in profile view the intense reaction Bankerd delivers when watching the “Players within the Play” scene. Mastering the confession of his “rank offense” scene, loaded heavily into a bottle, Bankerd astounds with his portrayal of King <Claudius>, keeping an impeccable balance between temper and restraint, all the while plotting and simultaneously humanizing this villainous knave. It’s fascinatingly frustrating and ferociously gripping.

The titular role falls onto the shoulders of Charlie Johnson, and Hamlet situates into a mockery of madness. Johnson approaches the character as if Hamlet himself were never truly made, but rather driven by grief and the need for vengeance, which fuels a false madness as a pretense to act unruly in the presence of those he scorns. Some of his soliloquys are jarring, particularly the iconic “to be or not to be” speech, which— like so many of his addresses in this fashion— he channels with unrelenting fortitude directly to one individual in the audience for great swathes of the speech. Comporting himself with the utmost emotional certainty, he is indeed a solid choice to carry the weighted and unfortunate crown of the young Danish Prince.

Susquehanna Shakespeare Ensemble has issued the challenge. Live theatre is as engaging as anything playing on the silver screen in the cinema, and demands your attention for these two hours’ time without pause or interruption. Will you heed the call?

Running Time: Approximately 2 hours and 15 minutes without an intermission

Hamlet plays with Susquehanna Shakespeare Ensemble on October 12, 13, and 14, 2017 at Center Stage Performing Arts Academy in the Dance With Me School of Dance studio space of 227 Gateway Drive in Bel Air, MD. Hamlet with also play October 19, 20, and 21, at the Elkton Station Black Box Space— 107 Railroad Ave in Elkton, MD. Tickets are available for both performances at the door or in advance online.

Review: Hamlet at Off the Quill