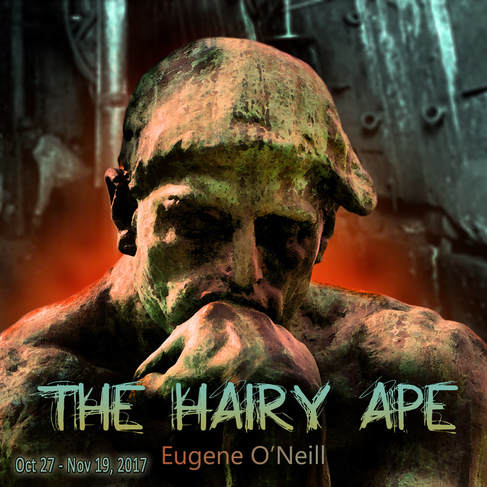 “I ain’t on oith and I ain’t in Heaven, get me? I’m in de middel tryin’ to seperate em, takin all de woist punches from bot’ of ’em. Maybe dat’s whay dey call Hell, huh?”

On a weekend packed with frightening diversions the most terrifying of all is surely Eugene O’Neill’s nearly century old expressionist drama, The Hairy Ape running through 19 November at Spotlighters Theatre. I was at opening night on Friday and I have been haunted ever since by the themes, staging, and performances. I had read the play ages ago, but, my exposure to O’Neill was mostly The Iceman Cometh and A Long Day’s Journey into Night. I was not prepared to be so engaged; a credit to the playwright, certainly, but also to Sherrionne Brown, the director, and Michael Leicht, the hairy ape, himself.

The piece treats on how we as humans and workers fit into the world we build; the answers are as scary today as they were when the play was first written. Which makes them even more dreadful. Over the course of the evening we see our invincible ‘hero’ broken by the very society to which he has devoted his body and labour. Yank is isolated from the world he served. He is beaten, derided, and imprisoned in his spiral from being the very steel that holds our whole world together to becoming our worst fears made manifest… pathetic and alone and dying… all of our existential woes in a pool of stage light.

“He slips on the floor and dies. The monkeys set up a chattering, whimpering wail. And, perhaps, the Hairy Ape at last belongs.”

You can see that this production is an effort of passion. The love that Brown and her team have for the material is obvious and we, the audience, benefit greatly from their care and investment. Brown’s staging is powerful but not overwrought, even when the rich enter down Fifth Avenue, described in the text as “a procession of gaudy marionettes, yet with something of the relentless horror of Frankensteins in their detached, mechanical unawareness” Brown tempers daring with subtlety to great effect and the moment is spectacular… the automatons prattle on immune to the insignificant Yank’s interruptions.

The director’s skill with language is apparent as well; O’Neill’s words sound at home in her actors’ mouths and the monologues, in particular, are a delight. Two stand outs are Thom Eric Sinn (as the elder stokeman Paddy), who takes us back to the age of sail in a passage where he breaks our hearts with his melodic brogue and Phil Gallagher (as Long and also the assistant director) who lays bare class condition in speech so well delivered that it could turn a republican red. His gorgeous accent helps.

We have come to expect an environmental set when walking into Spots and Ape doesn’t disappoint. Brown and Alan Zemla place us in the belly of the steamship and through the course of the action take us deeper into the stokehole, above deck, and onto the streets of New York with small elements that keep transitions fast and interesting. Al Ramer’s atmospheric lighting accents the spare transformations perfectly making each of the seven different scene locations dynamic and clear.

Brown also tackled costumes, a move that unified the style of the piece. From the murky dark palette of the stokers to the amazing and garish insanity of the ‘rich people’, colour told the story in concert with the other design elements.

But, while the cohesive designs were the bow that held the box together and made it look so damned good, the real gift was the performances that we got to see. Bob Michel, in his first ever performance, nails the role of the actual hairy ape, the literal monkey. It was a stroke of genius to have a newcomer take on a role so easy to ham up and Michel is so sincere in his delivery that we are never released from the gravity of the moment. Daniel Douek, a local favourite, cements himself further as a master of faces with his turn as one of the robotic ‘rich people’. He became a strange clockwork fashionista puppet; it was horrible and wonderful and it was one of the best things that I never want to see again.

Karen Starliper delivers on a thanklessly challenging role. Mildred is the whole problem for the play, it is her reaction to Yank (recoiling in fear, calling him a “filthy beast”, and fainting) that destroys his entire world. But she approaches the role as earnest as an over-privileged socialite who fancies them self a force for social justice might. The result is a nice enough girl that we can’t help but hate for her complicity and shortsightedness. It is a difficult place for an actress to go, but exactly what we need to ensure that Yank has a place in our hearts.

There are no weak links in this cast of steel, but you can see that the entire ensemble draws their strength from Michael Leicht and his virtuosic performance. Yank often describes himself as fire and that is what Leicht is for this production. His intensity, his physicality, his phrasing, all work to create a vivid and fully realized Yank, a man that we know in an instant but couldn’t possibly understand. He is muscular and massive, the strongest man that I have ever wanted to hug and comfort and it is that ability to play both muscle and heart is what makes Leicht’s Yank irresistible. As you can see from the first quote, the lines themselves are written in their own vernacular and Leicht makes them comprehensible and potent. Years have gone into his preparation, a decade if you read the program notes, and all of that time and effort pays off in one of the best individual performances that I have seen in years.

You should go out of your way to get to Spotlighters before the 19th of November and see The Hairy Ape. The production team and cast have a show to boast about, and one that we should talk about, so get to the theatre and join the conversation!

The Hairy Ape plays through November 19, 2017 at The Audrey Herman Spotlighters Theatre— 817 St. Paul Street in the historic Mount Vernon neighborhood of Baltimore City in Maryland. For tickets call the box office at (410) 752-1225 or purchase them online.

The Women at Spotlighters Theatre
Close