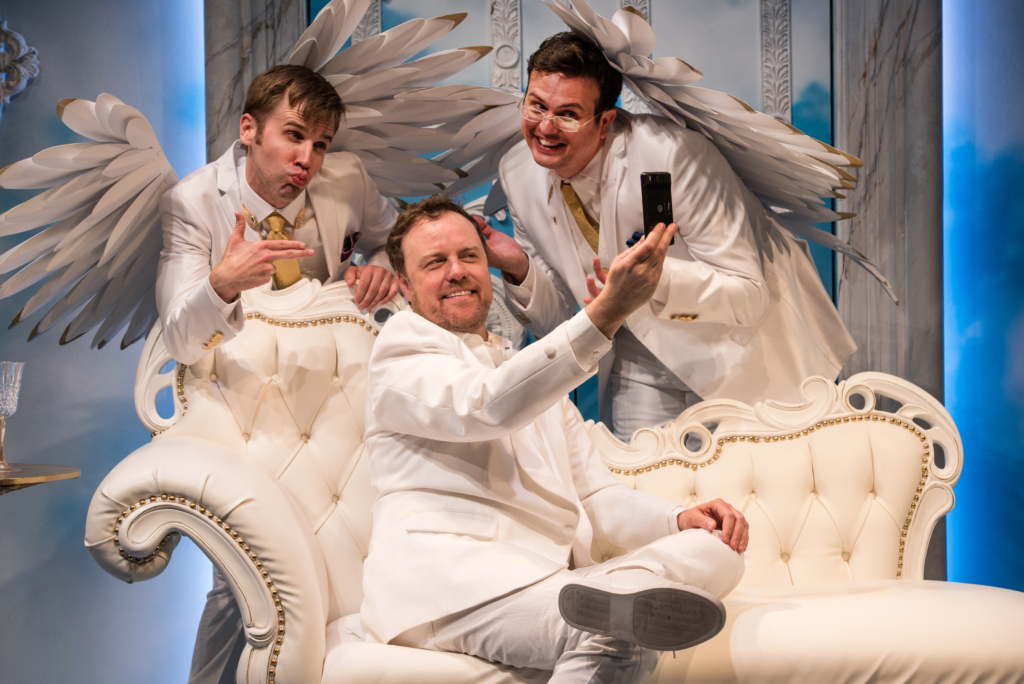 In the beginning God created the heavens and the earth. And somewhere between days two and six he created Signature Theatre way down in Shirlington, Virginia. And now, after thousands of years of watching the world filled with stupid humans do their worst, the almighty has deigned us meager mortals worthy of a visit— inside the Ark Theatre (because even God isn’t big enough to beat out A Little Night Music starring Bobby Smith next door in The Max)— because he’s come to set the record straight. Well, straight might be a harsh word here. God has come to lay down the law with ten brand-spanking new commandments that will get humanity going the way it’s supposed to once more! With the secular guidance of Director Eleanor Holdridge, God the Almighty— who for this particular engagement will be appearing in the corporeal form of beloved DC Actor Tom Story (a 7-time Helen Hayes Award nominee, and still not Bobby Smith)— imports the serious sass, heavenly hilarity and cosmic comedy that only the great creator can provide in a time when we humans of earth need an uplifting laugh the most.

Deigned worthy of constructing the lush and decadent space in which God decides to appear, Scenic Designer Daniel Conway takes the notion of a TV Studio talk program set and glorifies it to Hosanna in the highest. With a heavenly aesthetic in mind, Conway gets the sky blues and cloud motif going heartily over the play space, including elaborately ornate window frames in pristine angel-wing white, which looks out onto more celestial white clouds against a holy clear blue sky. The divine chaise upon which God will rest his royal rump for the majority of the performance, is equally decadent, suite for the King of man, as it were. Conway’s new title should be St. Conway, the martyr of fashion sensibilities when it comes to dressing a set.

Assisting St. Conway, and seated at the right hand of the designer gods, are Lighting Designer Alberto Segarra and Sound Designer Ryan Hickey. Like their very own Gabriel & Michael tag-team, Segarra and Hickey create all of the outrageous effects that accompany God’s many tantrums, hissy-fits, and mood-swings. Segarra and Hickey pair thunder and lightning together whenever God’s throwing back to his brimstone and fire old-testament mentality— with Hickey working extra hard to exalt the almighty father’s voice into a sonorous boom complete with echoing effect whenever a more serious moment of intensity is called for.

Connecting the holy trifecta of aforementioned designer angels, Costume Designer Robert Croghan reigns above them all with the outrageous wingspan featured on the sidekick angels. Gold tipped, to offset their sterile white attire, which Croghan further compliments with golden accessories, the wings are magnificent, right up until God decides to have a smiting fit. And even then, Croghan’s wings glisten against the almighty’s unyielding rage, complete with a glistening and glimmering gold bandage. Possessing the heavenly touch, Croghan ensures that Tom Story’s body looks as pristine as possible to be channeling the eminence and presence of God the almighty, giving him a crisp white suit that just screams ‘holier than thou’ from all angles.

This satirical dictation of God’s new word to our freshly awaiting ears— since this is God’s first time appearing live in the great nation’s capital, even if he is embodied inside beloved Washington-area actor Tom Story— as dictated by playwright David Javerbaum, is an uproarious yarn of laughable moments that raise more than a little hell when it comes to controversial humor. Witty, sharp, and hell-bent on giving theatergoers in the nation’s capital a much needed spiritual uplifting by way of sarcasm, and edgy, racy humor, Javerbaum’s masterpiece is arriving at exactly the right moment in time. (Well, duh. God did send it!) The subjects are topical, the jokes are not only relatable and relevant but heavily laced with a biting and bracing zest that will have you bursting with laughter straight through to the divine conclusion of the theatrical experience.

Naturally God can’t appear without his wingmen, both left and right high holy angels Gabriel and Michael. Along the same lines of appearing in familiar DC-actor faces, Gabriel takes up temporary corporeal residence in the body of Jamie Smithson (who’s been seen in the area quite a lot recently including around town at the Helen Hayes nominated Folger Theatre production of Sense and Sensibility) while Michael lands comfortably inside Evan Casey, who was most recently seen at Signature theatre in Midwestern Gothic. Both of this archangels have a great deal of substance to provide to the show, utilizing both Smithson and Casey’s bodies, acting talents, and comedic abilities to suit their purposes.

Gabriel navigates the body of Jamie Smithson and really makes him the “yes-angel” to God, never questioning, always agreeing. The Abraham imitation scene is hysterical and Smithson really falls into the affected vocal work of the character, in addition to having the most absurdly hilarious facial expressions to much of what God ends up saying. Michael, guiding the body and voice of Evan Casey, plays much more the doubting Thomas figure. With a sincerity that borders on severity, Casey gets out among the people— literally out into the audience to interact with the theatergoers— and really works that angelic angle, adding a dry wit to the humors of the performance.

As for poor Tom Story, who will never know his body has been hijacked for comedic genius by God (which begs the question if he gets an eighth Helen Hayes award nomination, who gets to accept— Story? Or God?), the flamboyant flippancy that flares through the entire evening is sublimely satirical and unspeakably funny. There is an indescribable fabulousness that is imbued to the entire manner in which words are spoken, anecdotes are relayed, and jokes are punched out. Excitingly irreverent and highly humorous, Story and God become one in the same for this endeavor and ultimately make the evening one of the funniest enjoyed out at Signature theatre in quite some time. There’s even a little nugget of wisdom buried amid the crude humor and hysterical hijinks, so keep your eyes and ears out and open for that too.

Revelations speaks of an apocalypse, or something like that, and you might just find yourself staring down the four horsemen thereof if you don’t procure a ticket for this truly ridiculous and highly hilarious experience that Signature Theatre is calling An Act of God.

Review: Cake Off at Signature Theatre