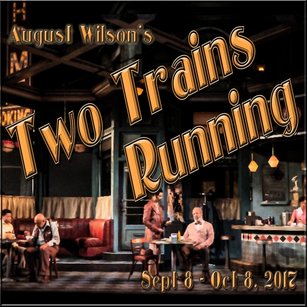 You got love and you got death; it’s all you got. And death will find you, but you’ve gotta find love. And believe you me, you’re going to find it when you fall in love with this stellar production of August Wilson’s Two Trains Running at The Audrey Herman Spotlighters Theatre this fall. Kicking off their 56th season— A Place Where We Belong— this 7th play of the 10-play Pittsburgh Cycle by the renowned and award-winning playwright, Two Trains Running will course through your heart and soul from beginning to end with raw and realistic characters from just inside The Hills District in the late 1960’s. Directed by Fuzz Roark, this performance masterpiece sets the bar extremely high for the season; it is a gripping and evocative piece of theatre performed with an astonishing finesse that puts Spotlighters Theatre on the same level of professionalism that you would get from any regional theatre in the state.

The set is stunning. Simply put, Resident Scenic Artist and Set Designer Alan S. Zemla has created his Sistine Chapel with the set for Two Trains Running. The nuanced attention to detail, the superb layout, the dramaturgical approach to the scenery, all of these things blend together to create a vivid and lifelike set wherein the actors become absorbed into their story so much so that they become the story. Because of the natural intimacy of the Spotlighters’ space, you become a fly on the wall inside Memphis Lee’s restaurant the moment you step into the theatre and are exposed to Zemla’s stellar set. The pepto-pink painted walls with aqua-foam trim show a tiredness to the location’s character; they are of an era gone by that the owner never bothered to change. Zemla hones in on making the place feel thoroughly used and lived in, there are dust spaces painted directly into the wall where pictures used to hang. There’s proper backwards lettering painted on the inside of the restaurant window, there’s even a full street scene painted into the window as well. Zemla’s space has charm; Zemla’s set has character, and it lends itself to the unique personalities of Wilsons’ characters.

Blood is coursing hard through the veins of this production; there is a life in the energy that is flickering around the stage, driven steadily and at pace by Director Fuzz Roark. August Wilson at the best of times, though deeply profound and often poetic in his style of capturing the hardships of real life, is wordy. But never once do you feel the weight of the show’s length barreling down on you, thanks to Roark’s swift sense of how to keep the pace of the show running on time like the two trains in the title. Roark approaches the piece with a seasoned understanding, allowing the actors to fall naturally into the rhythm of the story, treating the piece as if it were real life. There is an honesty that follows; the actors become these characters, living their lives, their strife and hardships, as well as their laughs. Roark promotes and encourages an emotionally charged environment, allowing the performers to plunder the depths of these deeply dynamic wells which Wilson has created in the characters that so readily emulate real life.

Roark is keenly aware of the balance of severity, sincerity, and humor contained within this work and does an exceptional job of leveling these elements against one another so that the drama is heavy in the places where it’s meant to collapse beneath the gravity of the situation, but light and airy when moments of silliness arise in the text. He doesn’t force artifice into the performances but allows the characters to naturally ease into the highly specific vernacular of the times. Coaching the cast of seven, Roark helps to flawlessly capture the sound of the black Hill District neighborhood in the late 60’s, mastering the way all the T’s are dropped from words, the language used as if it were common place, even the speed at which certain characters speak. This last nuance of dialect work upholds the believability of the Holloway character, who is meant to be in his mid-60’s but is played by a late 20-something actor.

Even the quietest of performers makes his mark on the production; Aaron Hancock, playing the mentally disturbed Hambone, delivers a marvelous performance that is both humorous and touching. The consistency with which he approaches his mannerisms and little ticks are striking. The eagerness perpetually bubbling in his eyeballs reflects the childlike mentality of his mindset. Though his text is much restricted to the repetitive line, “I want my ham”, there is so much conveyed in Hancock’s varied delivery of this line that you feel as if he’s a complete character with deep thoughts and emotions that he’s expounding, all in just a few simple words Watch the way he listens to a story when someone in the restaurant— usually Memphis Lee— starts waxing on; the way Hancock’s eyes and facial expressions drink in every word is fascinating.

West (Timothy Eric Andrews) exists outside of the familial bubble these neighbors create inside the restaurant. The character is a part of the neighborhood, but the cold and clinical detachment with which Andrews imbues the character speaks volumes of the man’s role in the community. There is a sterility to his personality, which bears striking weight upon the fact that he is the undertaker, constantly fixing up the dead and burying them. When he first stalks through the door, dressed to the nines— as previously described— in all black right down to the gloves (compliments of the dashing and astutely aware House of Bankerd’s costuming efforts), there is an air of otherness about him. Watch his facial expression closely, they are subtle, but very telling of the internal dialogue that is perpetually percolating inside his mind. Speaking with as much precision as is put into his sartorial selection, Andrews is the exacting fit for this character.

Edgy but humorous, until the situations get dire, Wolf (Mack Leamon) runs the numbers almost as much as he runs in and out of the restaurant. Leamon is convivial; there’s nothing phony or put-on about the way he approaches the character. Nearing the end of the first act, Leamon delves into a story about how he spent time in jail; the fluidity and vivid recall with which he tells that tale is harrowing, drawing deeply from an emotional spring inside of him. There is a heavy-hearted sense of earnestness in this story, and in other moments of emotional clarity when he engages with the other characters. His temper is unleashed when he comes to blows with Sterling and the tension is raw and exposed, funneling furiously from both actors.

The sagely sort, Holloway (Tyrell Martin) adds hints of levity to the situation, particularly when he starts carrying on about Aunt Esther. Martin, who is a young performer not quite three decades old, takes to the elderly character with rigorous aplomb, appropriating the physicality to match the withered and weary bones of a man that age. He shuffles with a hunch and leans forward when he speaks, as if trying to be heard and straining to hear. There are perfectly timed stammers in Martin’s delivery, when his mind is searching for what to say; all of these nuances make the character believable as an elderly sagely sort, despite the actor’s natural youth. Martin too possesses a congeniality about him and delivers the character in earnest, especially when the tales he tells go deep.

A disquiet settles over the restaurant every time Sterling (Troy Jennings) walks into the place. There is a palpable tension, an unease, that Jennings brings with him. A hot shot who talks big is exactly what Jennings brings to the table in the character of Sterling. He’s unruly, untrustworthy, and every time he moves or speaks, you jump just a little. Having a natural handle on his loose-cannon temper, Jennings revs up the character into a frothy state of unsettled excitement, often fueled by anger or motivated by a quick-scheme. When he comes to blows with Wolf, there is a chilling moment of tension that erupts between them, to the point of drawing everyone to the edge of their seats and this half-driven by Jennings’ delivery of the character.

With enough attitude to take out an entire Hills District city block all by herself, Risa (Linae Bullock) knows what’s what. Not of the gentle ‘tell it like it is’ fashion that suits Holloway or the bombastic larger than life attitude that is fitted to Sterling, Bullock finds her own fiery fashion for Risa, making her believable and quite humorous to watch. Praise should be laid upon her make-up technique for how authentic the scars on her legs look. Bullock’s facial expressions are animated, particularly when she’s in the background trying to blow off or ignore Sterling, trying to comfort Hambone, or trying not to kill Memphis Lee. Don’t be fooled by her tiny size, the Shakespearean adage of ferocity is in play here tenfold. When she erupts and loses her temper, hell hath no fury like this fierce woman.

Carrying the bulk of the storytelling and recollection on his shoulders, Louis B. Murry delivers a phenomenal performance as Memphis Lee. There is something honest in the way he talks, having a flawless delivery of the patois and cadence. There is something enticing in the way he waxes on, even when the story is unpleasant or makes no sense. Murry is a captivating performer who understands the intricate balance woven into his character and the way in which he interacts with all the other characters. You’re pulling for him, even when he’s barking at Risa. You’re siding with him, especially when it comes to dealing with West. You’re on his team, hoping that no harm comes to him. Murry is a powerful performer, giving a perfect performance in this role and it would a right shame to miss him deliver such fine theatre.

Two Trains Running will soon run outta town, and you won’t want to miss this stirring evocative masterpiece with quality talent delivering its striking message and story. Get your tickets today before you find you’ve missed the train.

Two Trains Running plays through October 8, 2017 at The Audrey Herman Spotlighters Theatre— 817 St. Paul Street in the historic Mount Vernon neighborhood of Baltimore City in Maryland. For tickets call the box office at (410) 752-1225 or purchase them online.

The Wiz at Spotlighters Theatre