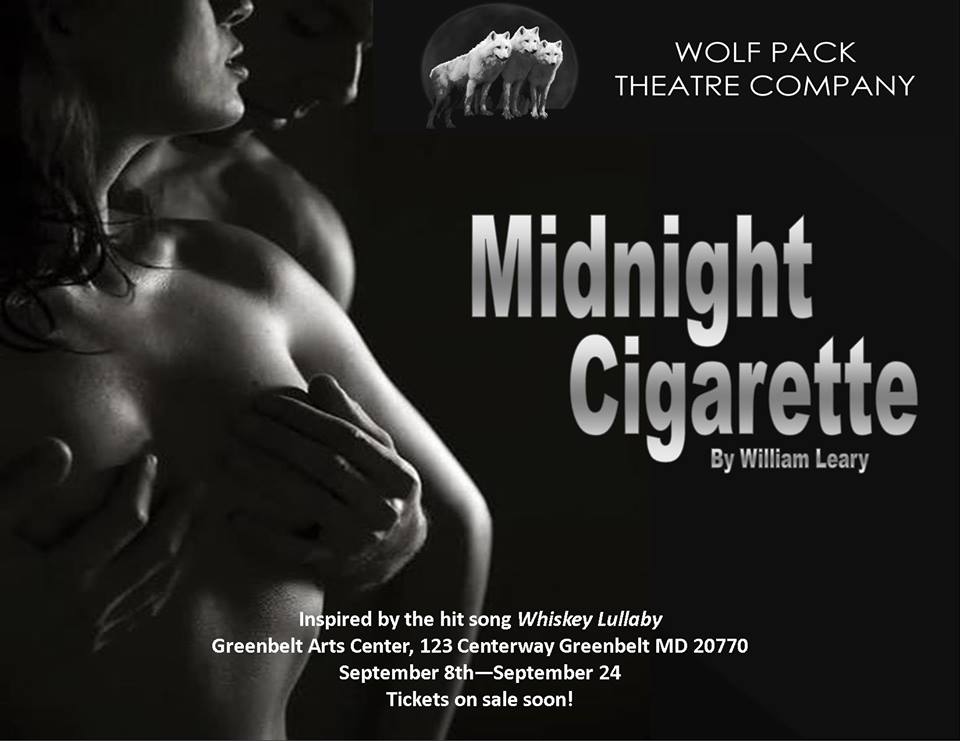 So reads the insert in the program of William Leary’s latest play. Set in a coal town with no more coal, Midnight Cigarette revolves around the remains of those still trying to live there. It’s a small town where everyone knows most everything about everyone, but as the main character says, “Sometimes it ain’t too good to know too much about a person.” Yet by the end of the night, you will.

The opening scene in the bedroom, in which the main characters Garth (Matt Baughman) and Christine (Kathy Ohlhaber) start their relationship introduces a world familiar with the casual making and losing of family. They have excellent chemistry, and the lines flow quickly with a rising and falling tension. You want to like them together, but there are signs that this cannot last. Both actors are wonderful in their characters, from Garth’s hidden menace becoming gradually exposed, to Christine’s eventual breakdown. (To Kathy’s folks, whom she mentioned aren’t allowed to see the show— Yes, she does great work, and yes, you should just take our word on it.)

The other side of the stage contains the local bar full of plain, good people. John Osborn as Conway plays the kind soul with authenticity and a natural physicality. Susan L. Smithers as the bar owner Brenda (how Brenda got the bar is a tale in its own right, of course) brings a fierce motherly loyalty and sympathy to do what’s right by her charges such that I’d be happy to attend her saloon. Dwayne Allen as Christine’s local-done-good brother Kurt well plays the nuanced role of someone who has seen life beyond the local horizon but has not forgotten where home and family are. Brigid K. Lally’s Tanya knows what’s what and how to get-er-done. Whereas when Elizabeth A. Weiss’ Pam claims, “I’m game”, it’s obvious Pam hasn’t yet learned the rules. Her realization of the consequences she has caused is marvelously performed.

Between the horse motif and the bar tchotchkes, Leary’s set dressing remains spot on in its details, even extending to the welcoming lobby. Danielle Beitzell’s costuming well places the action in coal country, albeit in the southern cowboy hat rather than the northern baseball cap region. Stephen Beitzell’s lighting design has wonderful multi-layered transitions between scenes and during character monologues, which you don’t get to see in the theater often enough. The original songs by Stephen Geddes (meta-mentioned in the dialogue) and haunting compositions by John Osborn blend well with the storyline.

Leary has a gift at writing believably real dialogue that moves quickly throughout. But at over three hours, not including a 15-minute intermission, I believe with some judicious editing he could tell just as compelling a story in a more concise time frame. Or at the very least, a secondary intermission needs to be added, as the first scene alone is 45 minutes long. The issue therein does not lie in the pacing, as Leary keeps the show moving along at breakneck speed, but that said the show’s length needs trimming, tightening, and editing in order to do the marvels of his work true justice. If you come into the production with a mini-series mind set, the actors and story will deliver, bumping this reviewer’s rating up from three and a half to four out of five stars.

Running Time: 3 hours and 30 minutes with one intermission

Midnight Cigarette plays through September 23, 2017 with Wolf Pack Theatre Company at the Greenbelt Arts Center— 123 Centerway in historic Greenbelt MD. For tickets call the box office at (301) 441-8770 or purchase them online.

Review: Love, Sex, and The I.R.S. at Wolfpack Theatre Company