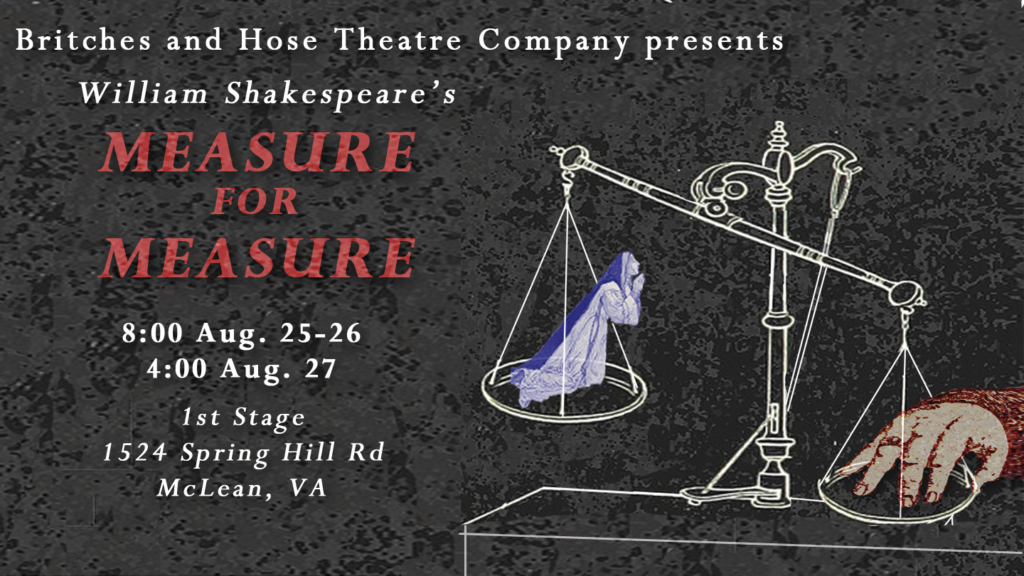 Measure for Measure, now presented by Britches and Hose Theater Company, has always been a dark play, and it seems darker still in these dark times. A leader decides to make his country great again, appointing one who is of tremendous hypocrisy and cruelty.

John Moss is that leader, Duke Vincentio, his performance growing stronger through the evening. His appointee is Glen Hochkeppel as Angelo, brilliantly disturbing as he enters with a feckless hand gesture and a sweep of his cape. Perhaps it was Daniel Rinehart’s German performance of “99 Luftballons” in the pre-show music that put me in mind of the German “Backpfeifengesicht”, a face in need of a fist. Hockheppel captures the just-plain-horrible Angelo perfectly.

The primary victim of Angelo’s brutality is Claudio (Nicola Collett), sentenced to death for a moral failing. Angelo then adds hypocrisy to cruelty, offering to spring Claudio if his sister Isabella (Leandra Lynn) will sleep with him. Collett moves storms, as Claudio genuinely fears to die, begging his sister to accept the atrocious offer. Lynn’s even-keeled performance is moved to its strongest heights when Hochkeppel proposes that abomination. The play’s blocking is unfortunately static through much of the show, but that scene pulses with energy and movement.

Did we mention that Measure for Measure is a comedy? A dark comedy, to be sure: Will MacLeod’s trolling witticisms as Lucio seem foolhardy against the violence of the main plotline, but they sparkle in that darkness. Tom Barylski is hilarious as the condemned Barnadine. Elizabeth Weiss plays a variety of comic roles, with a distinctly comic body language for each. Aurleia Khorsand is funny as Constable Elbow, but really caught the reviewer’s eye in the crowd scene: she commits wonderfully to the drama playing out before her (as well as injecting some much-needed comedy.) Spencer Pilcher is winning as the bawdy baud Pompey, particularly nailing a surreal little speech about stewed prunes.

The play’s ending has always been deeply morally ambiguous: Lynn’s blank, hurt stare says so very much. Even Angelo gets a happy ending, and presumably happy for Mariana, played by Amy Griffin with piercing intelligence and class, gliding across the floor as she moves.

The cast entertains pre-show and at intermission with singing, occasionally a bit off-key but engaging, accompanied by Director Dan Clark on his guitar. Mari Davis’ period costumes are incredibly rich and beautiful, especially on the upper-class characters. Clark’s period setting of the play keeps the current-event echoes from overwhelming Shakespeare’s verse: despite the play’s well-earned reputation as a “problem play” for its moral ambiguity, it contains some of Shakespeare’s loveliest verse. Clark has led his cast well through it: they’re clear and comprehensible throughout the entire three-plus hours of this only-lightly edited production. Pacing may pick up and be a bit tighter than the preview night as the run progresses.

This is a solid, sound production of one of Shakespeare’s most difficult plays. Shakespeare’s comedies defy easy categorization, and Britches and Hose grapple honorably with the play on its own terms.

Running Time: 3 hours and 30 minutes with one intermission

Measure for Measure plays through August 27, 2017 with Britches and Hose Theater Company at 1st Stage Theater— 1524 Spring Hill Road in McLean, VA. Tickets are available for purchase at the door— $15 for adults and $10 for students, seniors, and Military with ID.

She Stoops to Conquer at Britches and Hose