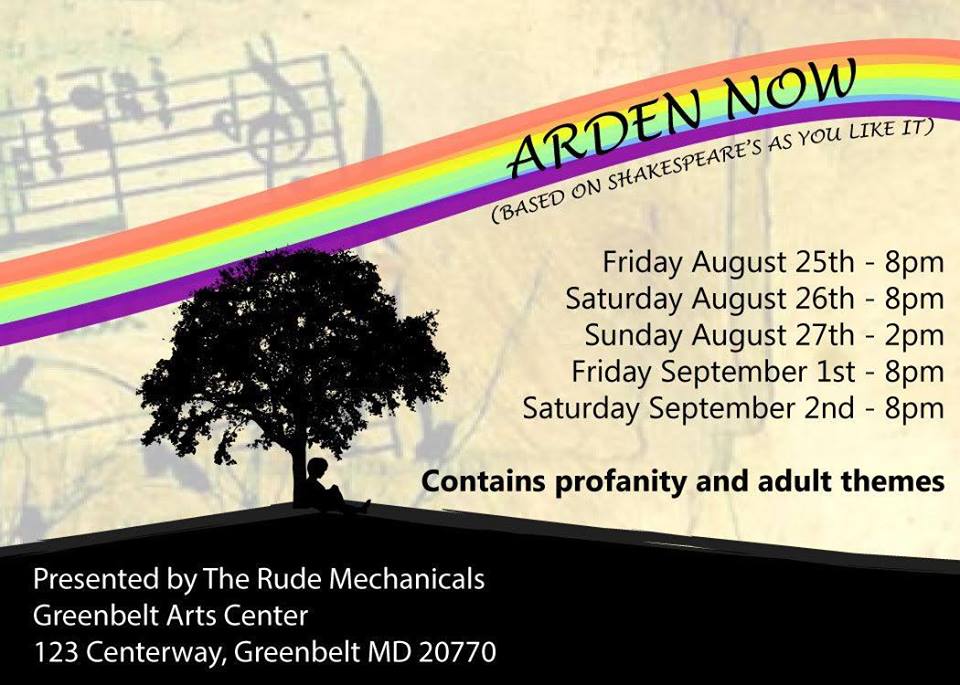 A collaborative adaptation of As You Like It by William Shakespeare; this is the marketing tag for The Rude Mechanical’s latest production— Arden Now­— which debuted earlier this summer at the 2017 Capital Fringe Festival. Now playing at the Greenbelt Arts Center for a two-weekend engagement, the doors have been opened to those unwilling or unable to attend the chaotic frenzy that is CapFringe, and the stage is a veritable carnival of concepts that don’t quite come together as Director Melissa Schick intends in her director’s note. Despite the show’s broader problems, there are strong performances contained within, and no one can fault the company for attempting to push the envelope when it comes to barriers beyond the comfort zone of the gender binary. 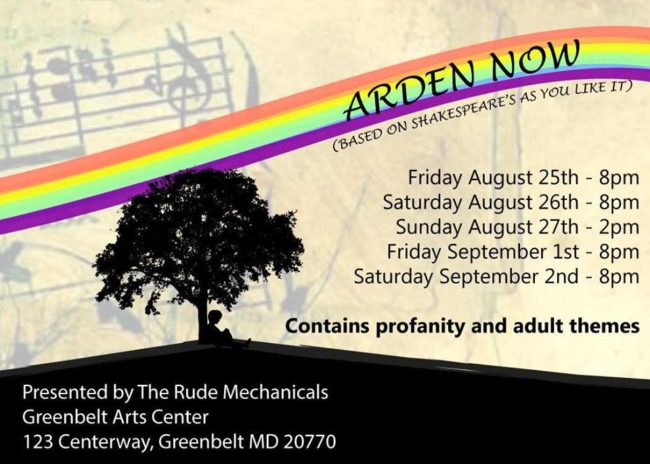 The show’s biggest issue is in its approach to adapting the work. Rendering As You Like It, despite the original text’s trite romantic plots and typically Shakespearean subplots, down so severely that major supporting characters— like Oliver and Audrey— are excluded beyond even mere mention, and that intensely important plot points— like the love-at-first-sight-wooing scene between Rosalind and Orlando is virtually non-existent— creates problems beyond compare for what Director Melissa Schick does leave in play when it comes to the original. The production could have been more strongly served if when Schick chose to reduce the plot and characters down so severely had the text and presentation been brought out of the Shakespearean tradition entirely. But Schick kept most of the dialogue exchanges in original Shakespearean text, up until the last few moments of the performance, which is another problematic element of the production.

Schick approaches the character of Hymen (whom Schick herself then plays) as a literal Deus Ex Machina, going so far as to make a glaringly obvious joke about the notion, which undermines what little truth and sincerity the other players manage to produce over the course of the venture. Showing up slapstick style, with an abrasive approach to the ending, Schick’s Hymen/Deus Ex Machina belittles the labored efforts of the others with the sarcastic and trite “here’s the ending” approach to the final scene. The whole final segment of the production seems to run aground with its sudden inclusion of Polyamory, blatant overstatement of asexuality, and frantic madcap dash to include everything else that was neglected along the way. The mishandling of Polyamory— by quickly introducing it as a thing that’s happened because Rosalind tricked Orlando into being involved with her while she was Ganymede, thus making them polyamorous, and then suddenly including Phebe because she wants to get with Ganymede— may be unintentionally offensive to those who partake in the practice, though as the epilogue states, they mean no harm or offense.

There is a smattering of other unresolved issues throughout the production, which make it difficult to focus on any one concept that Schick has attempted to weave into the production. Attempting to transcend the gender binary with a play whose humor and overall plot compliancy is structured around mistaken gender identities might be the first issue, but that aside, her approach to gender neutralizing all of the pronouns goes awry when she allows Costumer Dragan Rose to conform the show’s outfits to the standard gender binary. Beautiful as the costumes are, especially with the subtle use of red for in the court of the castle and green for the court of the forest, Rose’s costumes align the initial female-written characters with long flowing dresses, the Dukes with their masculine appearing cloaks, etc. This is no way an attack on Schick’s concept or existence outside of the gender binary, however, the concept is feeble and convoluted at best for this particular Shakespeare because of how it is initially written.

The two things that Schick does exceptionally well when it comes to the production is include timeless notions of song and poetry, as well as display to perfection the ideology behind Dominant and Submissive sexual lifestyles. The infusion of song and poetry throughout the piece, often in place of lengthy prose, is quite keen, making you wish there was more of it. And the way Schick elevates the dynamic of Phebe (Christine Smith) and Silvius (Eric Honour) to readily display shades of the BDSM kink and lifestyle is one of the most accurate portrayals to be witnessed in any staged adaptation in recent history and is one of the strongest concepts Schick puts forward in the production.

Musical Director Diana Dzikiewicz is deserving of the utmost praise when it comes to the perpetual underscoring of scenes. Dzikiewicz has composed original music that eases the flow of these scenes, heightened in moments of action, rhythmic and undulating in moments of sensuality, and overall the best feature of the show by far. Playing not only as the lively lead instrumentalist (accompanied occasionally by Eric Honour on percussion), Dzikiewicz takes up the role of Jaques, and although the character now rests far from melancholy in this curious adaptation, Dzikiewicz gives the character a unique life that makes Jacques most memorable.

Touchstone (Lauren Beward) is ever so out of touch with the reality of the play around him, though Beward does an apt job of making both the physicality and the vocality of the character melotheatric and over the top, a most befitting gesture for the fool character. It is at times difficult for characters like Touchstone to find their footing because the play seems to be happening on several planes of existence all jumbled together— a Shakespearean plane, a modern plane, a fantasy plane, a plane of exploratory sexuality— none of which seem to fall into step with one another as the play progresses.

The primary trio of performers, Jenn Robinson, Lynda Clarkewallis, and Holly Trout, take their characters in stride, giving them strong senses of the Shakespearean text. This is also true of Sean Butler, who takes up the dual-cast roles of the Dukes, flipping only demeanor and cloak when going from one to the other. Robinson and Trout have the firmest handle on the prose of Shakespeare, though their chemistry is somewhat dampened— no fault of their own as their initial build-up scenes are edited out of this production. Despite this, Robinson and Trout succeed in creating convincing tomfoolery when it comes to their interactions as Orlando and Ganymede, who is really just Rosalind in guise.

Solid effort and performances from the players, and exceptionally impressive music from Diana Dzikiewicz is what makes the production worth seeing. The production itself does raise a great many questions and has the right intentions behind it when it comes to defying the gender binary, if not the right direction, motion, and connectivity.

Arden Now plays through September 2nd, 2017 with The Rude Mechanicals at the Greenbelt Arts Center— 123 Centerway in historic Greenbelt MD. For tickets call the box office at (301) 441-8770 or purchase them online.

Review: The Life and Death of King John at The Rude Mechanicals

Review: All’s Well That Ends Well at The Rude Mechanicals