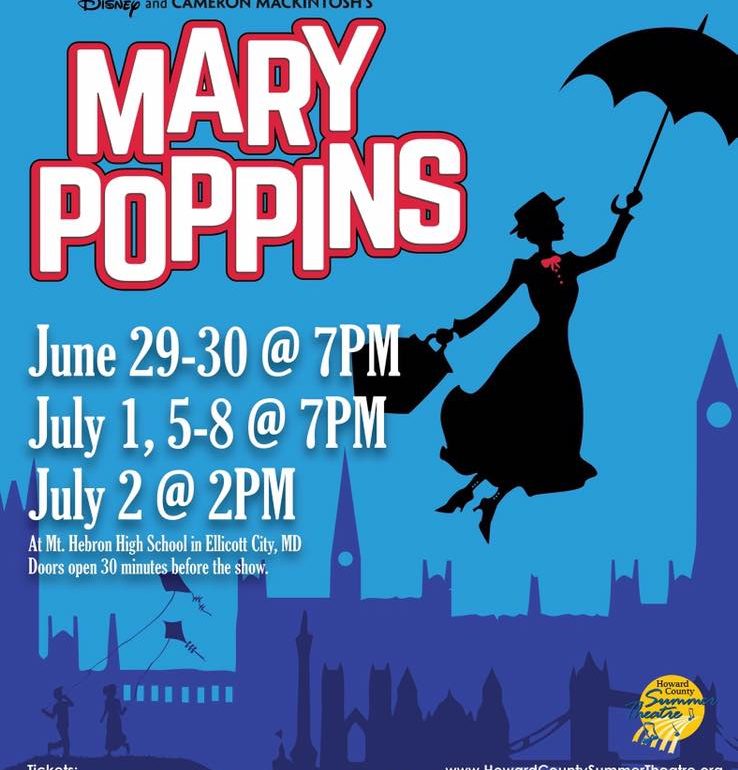 Stretch your mind beyond fantastic! Dreams are made of strong elastic! And Howard County Summer Theatre is living up the dream of a practically perfect production with their 2017 showing of Mary Poppins. Proudly wearing the badge of honor of Howard County’s imaginatively theatrical free-thinkers, Director Tom Sankey is certainly a person who sees beyond his blinkers! This show is amazing! This show is fantastic! This show far exceeds the community theatre standards and expectations of a main-stage Broadway-scale Disney musical. This show is— why— this show needs only one word to describe it:

SUPERCALIFRAGILISTICEXPIALIDOCIOUS! That’s right! And most definitely the sound of it— the show that is— is quite far from atrocious! The talent is astonishing— it’s practically precocious! It’s SUPERCALIFRAGILISTICEXPIALIDOCIOUS! Tom Sankey has a brilliant team of performers, designers, and overall imaginative thinkers on his side making this production a sensational smash that defies description and is truly beyond compare. Handling the time-honored tradition of enormous ensembles with a deftly trained hand, Sankey puts all the talent in all the right roles, keeps the stage from ever appearing too crowded, and really draws the attention to the phenomenal dancing that populates the production.

You’ll see far beyond your blinkers when it comes to looking at the astonishing dance routines that are put into this performance, and it’s no wonder given that it’s not one, nor two, not even three choreographers, but rather an entire Choreographic Team! Amanda Slatin, Kassi Serafini, Alyssa Tschirgi, Laura Greffen, and Victoria Farnsworth comprise the quintet responsible for the stunning success of tremendously motivated, enthusiastic, and impressive numbers like “Jolly Holiday” and “Supercalifragilisticexpialidocious.” Slatin, Serafini, Tschirgi, Greffen, and Farnsworth put their skill sets together and work with the dancers who really have finesse, using them to lead these larger routines. The team takes simpler moves for those of a lower-practiced dance-level and blends them accordingly so that the stronger dancers are featured. True to the show’s motto— in the vein of anything can happen— they move a mountain of people— practically the entire cast— and transform them into stellar tap dancers for the epic and practically perfectly indescribable “Step in Time.” Not to be trite, but really and truly, the only word for how utterly amazing and incredible that routine is? Well, I think by now you must know it’s SUPERCALIFRAGILISTICEXPIALIDOCIOUS!

There’s so much happening on the set, around the set, and over the set that I don’t want to miss anyone when it comes to congratulations on how spectacular of a job has been done here. Set Designer Joe Blasko works with Lighting Designer Lauren Stetson, who both in-turn work with Properties Directors Gary Grabau and Regina Kempic to make real magic happen. And naturally it all comes together with a spoonful of sugar thanks to Holly Bennett, Jimmy Nolan and Flying by Foy— those in charge of coordinating both Mary’s magical fights and Bert’s irresistible ability to truly go up and over the roof times! Blasko’s sets are charming, Stetson’s lighting divine; Grabau and Kempic add all sorts of magic all throughout the Banks’ household— especially the kitchen! And let’s not forget Costume Designer Laural Seivold Clark, who captures the iconic Disney look of Mary Poppins herself, among others, and gives everyone that spit-spot polish with great consistency across the entire cast.

Happiness is blooming all around this cast— the daffodils are smiling at the doves! When the ensemble sings and dances you’ll feel real grand, your heart will start beating like a big brass band! It’s true— everyone from the strangely snarky Bank Chairman (Rich Greenslit) right up to Miss Practically Perfect herself— the entire cast is made out of theatrical magic and they’re making theatrical magic with the way they’re carrying off this production. Even those with rathe minor roles— like Neleus (Kevin Nolan) or Von Hussler (Chuck Bagley) and Mr. Northbrook (John Nupp)— have little moments that sparkle like the stars that Mary Poppins’ promises you’ll get when you aim for the heavens. And let’s not forget Miss Corry (Cindy Rinaldi) who puts some positively pizzazz-ful pep into her Talking Shop scene, which follows supercharged right into “Supercalifragilisticexpialidocious.”

With beautiful voices all around, delicate sounding songs like “Feed The Birds”, performed by The Bird Lady (Pam Land) is a cherished memory that stirs to life right on the very steps of St. Paul. Land is convivial of voice and perfectly pitched throughout the song. What’s more impressive are the roll-along pigeons that are puppeted through the number, adding a quirky and whimsical element to the production. This whimsy, under the vision of Tom Sankey, can be found readily throughout the production, like with the penguin puppets appearing during “Jolly Holiday”, which is a nod to the original film version of Mary Poppins.

Other astonishing voices in the minor character department include that of “The Holy Terror” also known as Miss Andrew (at this performance Laura Goudreau.) With a fierce black costume that precedes her even more ferocious attitude into the room, Goudreau lives up to the character’s moniker with vigor. With a smashingly superior soprano range, she shrill-belts the high notes of “Brimstone and Treacle” with much tenacity, sending shivers of unpleasant revulsion all throughout the Banks’ household and well out into the house of the theatre. When she rage-blasts her way through “Brimstone and Treacle (Reprise)” there is a hilarious moment cultivated between her and Poppins where just the slightest of cheeky eyerolls on Poppins’ behalf sends Goudreau wailing in fury as she completes the throw-down battle-style duet.

Pinky and Perky— a right comic duo as the English might say! Though in this one we’ll just call them Mrs. Brill (Libby Burgess) and Robertson Ay (Todd Hochkeppel.) Burgess is snappy, snarky, and sarcastic, which makes Hochkeppel’s buffoonery and tomfoolery that much more amusing. Steeped deep in the stupidity of an utter nincompoop, Hochkeppel makes a few scene-stealing moments pop to life with panache in this bit-part comic relief role, playing exceptionally well against the sniping and spirited Burgess, who takes her role of Mrs. Brill quite seriously! The pair have a great working dynamic, particularly when it comes to interweaving Hochkeppel’s humorous physicality through Burgess’ stalwart stillness.

Two adorable children, or rather bratty monsters, Jane and Michael Banks (at this performance Brooke Webster and Jeremy Nupp) are just what brings Mary Poppins sailing into Cherry Tree Lane, after all! Precocious, presumptuous, and preposterously petulant— at least until they’ve had their spoonful of sugar— Webster and Nupp are masters of being irksome little devils! It’s no wonder they’ve gone through so many nannies so quickly! Perfect at playing these parts, and sweetening into adorable angels as they learn their lessons, both Webster and Nupp are well suited for their roles. With voices that are far more angelic than their initial dispositions, the prelude to “Jolly Holiday” along with other bits of songs that they sing, are delightful and sugary on the ear.

George Banks (David Bittner) and Mrs. Banks (Robyn Bloom) are quite the couple when it comes to the way they interact with one another. Bittner has mastered the rigid and sterile exterior of his character, making every sentence and sung note a stern command, which makes it all the more hysterical when he goes dashing at the arrival of Miss Andrew! Bloom, who is robust of voice when it comes to singing, albeit wobbly of her accent’s consistency— perhaps a subtle nod to the days when Mrs. Banks was an actress upon the stage!— gives a sound emotional performance as Winifred, particularly when singing “Being Mrs. Banks” and learning to see things beyond her blinkers when it comes to running the household. By the show’s conclusion, both Bittner and Bloom have showcased tremendous and dynamic changes in their character portrayal, which is not only vital to the story but impressive as well.

Justin Moe must have rubbed hands with every cast member in the production as he’s clearly the luckiest chimney sweep alive tackling the role of Bert so perfectly. It’s tough to say who’s stealing the show faster, him or Heather Reed as Mary Poppins, but together they’re a dynamite sensation, an unstoppable pair, and beyond practically perfect in every way. Both Moe and Reed are phenomenal; if either of them have flaws they certainly never dare to let them show. From Moe’s hearty and consistent working-class English accent to his cheery nature no matter what the situation, he captures the essence of Bert the way one captures a wish upon a shooting star. Reed, whose accent is just as flawless and consistent though in a very different manner, is as convivial as Moe is earnest and together the pair make some truly magical moments happen upon the stage.

Moe is peddling the story not only of Mary Poppins but of the Banks’ family and the whole of the world when it comes to his narrative ability. His voice is sublime, particularly when he sings the multiple asides of “Chim-Chim Cher-ee” and “Cherry Tree Lane”, which occur with great frequency throughout the musical. There is something that I just can’t put my finger on when it comes to this loveable fella, he’s got the perfect voice, the perfect accent, the perfect dance moves, why he even flips and floats perfectly through “Step in Time.” Surely there’s a word that sums up Moe’s stellar performance, only I think it must be SUPERCALIFRAGILISTICEXPIALIDOCIOUS!

Reed, as Poppins, falls under a similar label. She’s SUPERCALIFRAGILISTICEXPIALIDOCIOUS and that’s all there is too it. Balancing her cheeky level of certainty against the good-natured will of the flying nanny, Reed is a dream come true and doing the character the finest justice since Julie Andrews originated the role for the screen back in 1964. With a voice as crystal clear as a lark, numbers like “A Spoonful of Sugar” and “Practically Perfect” are indeed just that, practically perfect. She sings, she dances, she acts as Mary Poppins ought to— there’s simply no finding flaw with this one! Reed is so sure of herself as Mary Poppins that she makes other people sure and that is— let me say it just one more time, the word of the day? SUPERCALIFRAGILISTICEXPIALIDOCIOUS!

So when you’ve found you’ve lost your tongue, there’s no need to dismay! Just summon up that word (I’ve used it at least half a dozen times now) and you’ve got a lot say! I simply can’t be plainer when I say that word to you— it’s the finest word you’ve ever heard and for this production it is true! Howard County Summer Theatre’s Mary Poppins is SUPERCALIFRAGILISTICEXPIALIDOCIOUS!

Mary Poppins plays through July 8, 2017 at the Howard County Summer Theatre in the auditorium of the Mt. Hebron High School— 9440 Old Frederick Road in Ellicott City, MD. Tickets may be purchased at the door or in advance online.