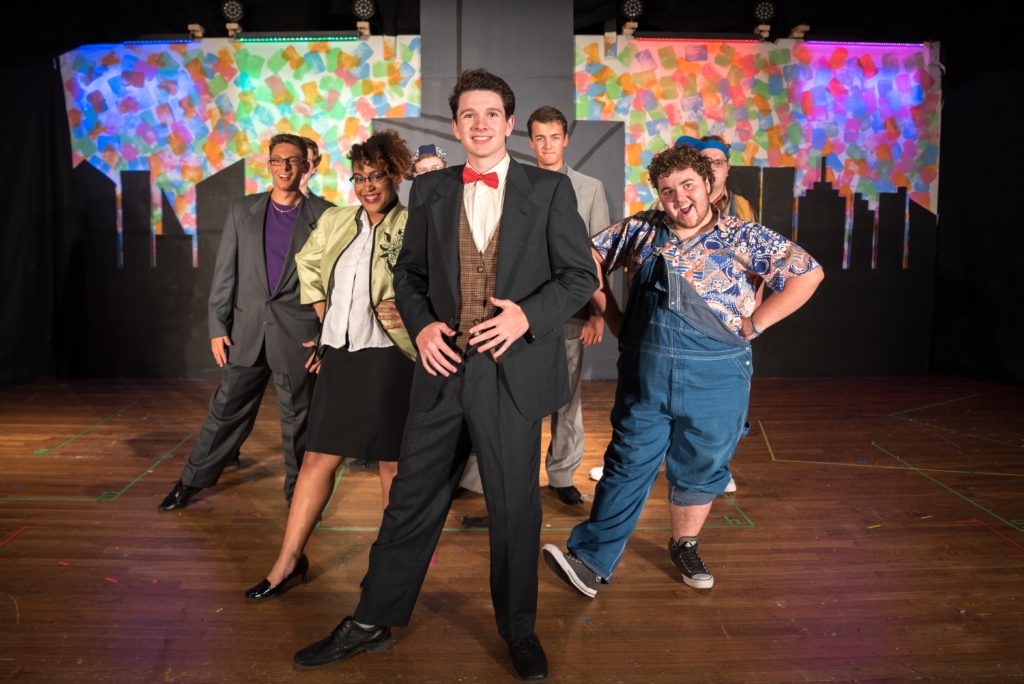 This little review is designed to tell you everything you need to know about How to Succeed in Business Without Really Trying currently appearing at STAR Ltd. Now let us assume that you are enthusiastic, passionate, clear-eyed and eager to get out and see quality teen theatre in the Baltimore County area, anxious to arrive at a solid production created by talented youth— you can! If you have education, intelligence, and ability, so much the better, but remember that hundreds of people lacking these qualities will miss out on this golden opportunity to see quality theatre this summer— and you don’t want to be one of them. Directed by Michael Juba and Assistant Directed by Charlie Roberts, with Musical Direction by Scott AuCoin, this show is all that you need— when learning all about how to— how to— succeed!

Arguably Frank Loesser’s less successful musical, especially by comparison to Guys & Dolls, it makes audience members far and wide stop and scratch their heads when it comes to why. Surely a charming and kitschy musical with everything the mid-60’s has to offer by way of office life, what could possibly be more enjoyable? Director Michael Juba takes a bold risk and pushes the musical forward into the late 90’s— December of 1998 to be exact, and suddenly that charming, laughable treatment that echoes all throughout the production is revealed to be rather intolerant and heavily sexist. This could easily bring a musical crashing to a halt but under Juba’s keen directorial focus, there is a reverence paid to the original plot while elevating a “correction of erroneous ways” in his approach to the show.

Placing the show in the late 90’s calls attention to the fact that secretaries were just objects of lust and affection rather than equally treated functioning components of office life. The modern woman wouldn’t stand for this sort of behavior and Juba does an excellent job of reflecting this modernity in these women, particularly in the number “A Secretary is Not a Toy.” Juba plays cleverly with the “World Wide Wicket” corporation, seen as “WWW” and draws a noticeable parallel to the “world wide web” rising to stardom in the late 90’s. A few updated lines— “webcast treasure hunt” instead of TV program, and making sure to mention the “Head of Human Resources” rather than Personnel at the end are just a handful of carefully nuanced details that Juba works into his 90’s vision of the show. And somebody somewhere deserves a serious nod of praise and approval for the midi-blitz “Barbie Girl” ringtone that lights up Bratt’s phone every time it rings.

Matching this temporal shift, Costume Designer Cami Wise finds all of the iconic looks of the 90’s— everything from the gothic grungy gear featured on Smitty to the upturned visor and one-leg rolled-up overalls on Bud Frump. Wise lives up to her namesake and keeps the dresses for “Paris Original” simple: a shiny black affair with a big white satin bow, gaudy but perfectly suitable for a 90’s high school dance. The crowning glory of Wise’s costume work, however, is not the shimmery sequin outfit on Hedy LaRue— though that certainly is a sartorial selection not soon forgotten— but rather the Fresh Prince of Bel Air inspired look featured on Mr. Wally Womper, the young-punk chairman of the board.

Struggling to succeed with the cavernous hall and careworn sound system of the Rice Auditorium, Musical Director Scott AuCoin does his best to balance the pit and keep them from overplaying and drowning out the performers. This is no easy task given the setup of the space. Despite some minor volume issues, AuCoin’s work with the ensemble is impressive, creating blended harmonies and strong group numbers like “A Secretary is Not a Toy” and “Brotherhood of Man.” Adding panache to these numbers, Choreographer Cheryl J. Campo brings seasoned spirit to the routines, particularly “Brotherhood of Man”, which really showcases a core quintet of dancing young men— Henry O’Toole leading the bunch with Joshua Olujide, Michael Weiss, Jack Buzzard, and Nick Zuelsdorf— spinning over chairs and really strutting their stuff in this song.

In this show it’s all about the face, ‘bout the face, ‘bout the face— no fooling! There is so much serious shade being thrown about in this office life of the World Wide Wicket building you’d think it was an episode of the latest, greatest reality TV show— and it’s all happening in wildly animated facial expressions. These highly nuanced facial expression showdowns that happen among the varying principle and ensemble characters are what take the production value to the next level, giving the audience a sense of who these characters really are and how their dynamics play out among one another. Watch Smitty (at this performance Bridget Edmondson) as well as Bud Frump (at this performance Dave Martinek) melodramatically melt down during “Coffee Break.” This number is also noteworthy for the Starbucks barista that makes a cameo appearance at the end as well as Campo’s zombie-apocalypse twitch-to-life choreography.

Martinek, as the weaseling whining momma’s boy Frump, is wild of face and of complaint when it comes to getting his way. There are dozens of little things that he does all throughout the performance that results in great snickers and snorts of laughter, especially when interacting with his uncle J.B. Biggley (at this performance Michael Stromberg.) Clearly having read the memo about facial individuality, Stromberg is top of his class when it comes to exasperative facials, particularly when melting down every time his wife is on the phone. There is something hilariously unfathomable that simply cannot be put into words when it comes to watching Stromberg tackle this larger than life executive character. With a robust voice and hyper-spiritualized energy to match, he tears into “Grand Old Ivy” and all but rip, rip, rips his way through the number with zeal that could takedown Zeus.

Stromberg is wittingly, willingly, and wonderfully matched with the saucy, snappy, and seductive Hedy LaRue (at this performance Grace Dillon.) The pair take their duet, “Love From a Heart of Gold” in perfect harmony, each putting beautiful voices on display. Dillon, who struts in her shimmery and short costume with practiced ease, is a hoot in the role of the bubbleheaded bimbo, really livening the character up when it comes to her multiple facets— all two of them. Much like Miss Jones (Keche Arrington) and Mr. Bratt (Michael Weiss) it all comes down to attitude when it comes to the way Dillon takes on Hedy. Arrington and Weiss, who are highly specialized key components of operational unity in this production— as they are but a small handful of individuals not double-cast— really turn out snazzy character portrayals with Weiss showcasing a maturity both physically and vocally beyond his actual years to really do the character justice and Arrington going leaps and bounds into the depths of biting sarcasm to etch out a niche for her character.

John Rivers shares a similar distinction with the aforementioned Arrington and Weiss, as he plays both Twimble and the esteemed Wally Womper for both weekends of the show’s run. Mealy and adorable as Mr. Twimble, his duet shared with Finch— “The Company Way” is humorous to the end. When Rivers doubles up as Wally Womper, though his words are brief, his characterization is a scream. Josie Borsh also shares this honor with Rivers as she plays Miss Gatch— a role traditionally relegated to a Mr.— at both performances. This makes her “off to Venezuela” scene a proudly progressive and accepting moment for any performer of all genders in the work place.

Suddenly there is music in the sound of her name— Rosemary (at this performance Kayla Sharp)— can’t you hear it? Rosemary! Sweet and winsome, gooey and green. But she finds a crescendo— and it’s a moment to be seen! Sharp starts off as all dopey ingénues in Frank Loesser’s work do, innocent and wide-eyed. But the beauty— aside from her sweet and dulcet voice— is how quickly Sharp recognizes that “all of her lifetime program will be more of the same.” You never quite lose that optimism that standing by the neglectful chauvinist will one day pay off but Sharp makes it apparently clear very early on that this is no life for a lady, almost mocking her way through “Happy to Keep His Dinner Warm.”

There is no denying, however, that the chemistry that sparks up between Sharp’s character and J. Pierrepont Finch (at this performance Henry O’Toole), is in fact genuine. Their adorable little flirtations— aided and abetted by Smitty during “It’s Been a Long Day” are too cute for words. As for Finch— that’s F-I-N-C-H— O’Toole has this one in the bag. Cheeky, smug, and smooth, he lays into the character with practiced panache and delivers punch after punch of perfect facial expressions as well as flawlessly sung solos. The energy never abates, even when the character is down and out! There’s even that slam, bang, tang reminiscent of gin and vermouth when it comes to the way he rolls through “I Believe In You” and “Brotherhood of Man.” O’Toole is climbing his way to the top with this one— somebody better ring up Broadway and tell ‘em, “Watch! Out!”

If you have followed all the careful instructions— 1. Buy a ticket to STAR Ltd’s How To Succeed… 2. Go to The Rice Auditorium 3. Watch the show, then you are well on your way to becoming a successful audience member this summer! Don’t wait to get your tickets— World Wide Wickets may not last for long with all of the Finch-y shenanigans going down over there!

How to Succeed in Business Without Really Trying plays through August 6, 2017 with STAR Ltd in the Rice Auditorium of the Spring Grove Hospital Campus— 55 Wade Avenue in Catonsville, MD. Tickets can be purchased at the door or in advance online.