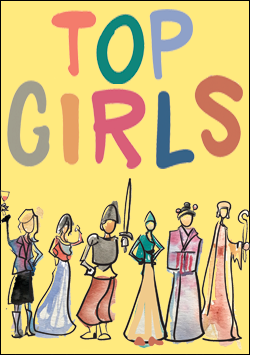 If you could sit down to dinner, or better yet a dinner party, with any five influential women in history, who would you choose? Well-behaved women seldom make history, as Laurel Thatcher Ulrich says. Wouldn’t you want to choose radical women, the movers and shakers of their time? Those that simply refused to live the life of a lady and broke through the gender barrier that so often held them in place, wouldn’t those be your choice invitees to a dinner party in a completely absurdist and fictitious dream sequence? Caryl Churchill seemed to think so, opening the first act of Top Girls with characters of history like Pope Joan and Lady Nijo among others to attend Marlene’s strange dreamland dinner party to celebrate her promotion at work. Directed by Suzanne Beal and now appearing on the main stage of the Maryland Ensemble Theatre, Top Girls is strikingly relevant to the current political climate and indeed reminds us that women have a voice and should use it whenever possible.

The show’s aesthetic is kept intentionally simplistic. Set Designer Cody Gilliam’s layout takes a minimalist approach, allowing the absurdity and heightened reality of Caryl Churchill’s work, in the first and second act respectively, to dominate the floor, being the primary source of physical action on the stage. Gilliam’s floor plan allows for maximum emotional expression and this is augmented tremendously by Lighting Designer Tabetha White, who draws focus to certain segments of the spatial lineup with warm spotlights. White also uses an intense blue wash to illuminate the entirety of the opening act, signaling to the audience the surreal nature of the dream sequence.

Sartorial selections are most important in the first act of the production as Costume Designer Jennifer Adams is able to parade a plethora of historically captivating couture for each of the historically fictitious characters. Though the second act’s costumes are figure flattering, era appropriate, and tastefully simple, they’re ordinary by comparison. This too is intentional, furthering the sharp contrast between the malady of the dream world in the first act and the sanity— what little there is to be had— in the second act. Adams is particularly adept at finding outfits that complement each of the women’s figures but also their personalities, whether they’re playing outrageous characters like Dull Gret and Isabella Bird or the more ordinary Marlene and Joyce.

Fascinating beyond compare is the real-time approach the Director Suzanne Beal takes to the opening act. Moving this dream sequence along in a rapacious blur of cacophonous din, characters talk over one another in a lively and spirited conversational fashion. The honest realism that this approach to the text provides is astonishing. Clips and fragments of stories and yarns flit past the ear as the act rolls along at nearly a breakneck pace, with a perpetual tug-of-war for attention between Isabella Bird and Lady Nijo; the pair is constantly at odds when it comes to steering the conversation in their direction. Beal conducts this chaos like a finely tuned symphony, so that the rising clatter of din exists with dizzying beauty rather than obnoxious confusion.

Assisting in this matter, and that of placing the show in its proper allocation in time and space come the second act, is Dialect Coach Kiersten Trump. Distinguishing varying English accents from one another, Trump guides the seven women of the cast through choppy waters of the channel when it comes to the exacting sounds that their characters are meant to make. These accent assists are even more present in the opening act where the characters of history over-articulate and over-speak their particular dialect and patois, furthering to ground the reality of their presence in truth.

Beal makes the piece feel in perfect alignment with the mission statement of the MET, crafting a truly ensemble-based piece from the work despite having the character of Marlene as a central front-runner in both the first and second act. Beal also draws the audience’s attention to the central conceit of the show: the struggle of being a working woman in the world. Tackling issues like motherhood, family, and promotions in the workplace, Beal carefully examines Churchill’s work and hones in on the underlying messages, making them readily accessible to the everyman, despite Churchill’s occasionally convoluted approach.

Every person has their place in this ensemble, some popping up more than others, but all filling in to be a fully functioning part of a well-oiled theatrical machine.  Emily Raines, playing Patient Griselda in the opening act, arrives last to the dinner table and has a clipped and reserved air about her mannerisms but has no trouble blending into the flurry of conversation once present. Raines’ second act character, Mrs. Kidd, delivers a guilt-laden assault at Marlene on behalf of her husband that is both visceral and emotionally disturbing. Equally invested in creating unique characters, Katie Rattigan— whose only role in the first act is that of the waitress— provides a sharp contrast between Win, the sniping office girl at the agency and her youthfully impetuous Kit, delivering the latter with childish patois and infantile mannerisms that pluck ripe against Angie in those scenes where they interact.

Karli Cole, playing the aforementioned Angie, proves her versatility among the six actresses who switch and swap characters by creating a dynamic portrayal first as the boisterously outspoken Pope Joan and later as the slightly off-kilter Angie. While the Pope Joan performance is particularly enthralling, especially when it comes to some of her more laughable segments of text, it’s Cole’s portrayal of Angie that grasps the audience hard by the heart. Emotionally unbalanced, Cole’s riveting performance garners a great deal of sympathy for the girl and her current predicament.

Katie Hileman makes a game from a task when it comes to her opening act character of Dull Gret. Chewing the scenery in a most amusing manner with her brutish and uncivilized shenanigans, she quietly pulls the attention to her character every now and again during the dinner party scene just so that we remember she’s there. So too does Surasree Das, playing Lady Nijo in that very same act. With reserved mannerisms befitting of a concubine, her tricky tongue in cheek delivery holds its own against the others, in particularly Isabella Bird (Julie Herber) who seems to be in a constant battle over conversational dominance. Das delivers a harrowing blow toward the ends of the first act when it comes to emotional expressivity, her character’s mournful plight rising above the rest of the conversational din to turn all eyes toward her.

Herber, who carries the back end of the second act as Joyce, traverses a great may English accents over the course of the evening and maintains all three of them with great consistency. Playing the majority of her scenes against Marlene (Gené Fouché), Herber finds grit and roots for her Joyce character when it comes to putting her feelings on the table. Carefully spinning the tension between them, Herber leads the push-and-pull nature of these emotionally heightened scenes between them, twisting and distorting the plot secrets until they all come gushing forth like a broken river dam. The climactic finale between the pair is quite harrowing.

Fouché is the only actor of the seven to play just one character. As Marlene, Fouché makes this guiding force of a woman both the focal point of the show and a background presence often simultaneously. Understanding the necessity of balancing such a character energy, Fouché deftly navigates Marlene through the absurdity of the opening scene, allowing her to fade into the periphery as the other characters take point in charging the scene-long act forward. Giving her a much sturdier grounding in the second act, particularly when playing opposite of Herber’s Joyce, Fouché exposes a raw and brutal underpinning of the character’s baser natures. Though her accent wobbles a bit, perhaps an intentional choice as it’s much more uneven in the first act and this could be an attempt at putting on airs with her imaginary historical friends, her overall performance both physically and emotionally is relentless and grounded.

Top Girls is a piece for the ages, particularly now when it comes to finding footing in these unsettling political times where women’s rights and voices are threatened. Definitely worth investigating, this production is a fine representation of both the MET’s core concept of working as an ensemble and quality theatre in Frederick.

Top Girls plays through March 5, 2017 at on the Main Stage of the Maryland Ensemble Theatre in the Historic FSK Hotel building— 31 W. Patrick street in downtown historic Frederick, MD. For tickets call the box office at (301) 694-4744 or purchase them online.

MET Marches On: An Interview with Artistic Director Tad Janes about the 2016/2017 Season at Maryland Ensemble Theatre
Close