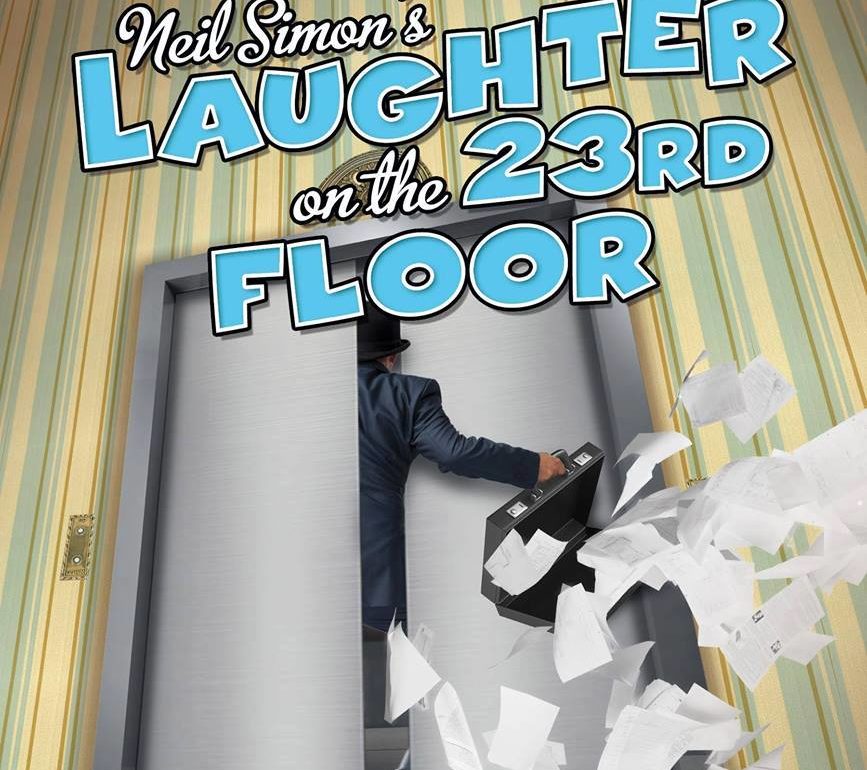 Funny is money and you can take it straight to the bank that Neil Simon’s Laughter on the 23rd Floor will have you rolling in riches before the night is through. Comically charged and full of political prescience that will knock your socks clean out the window, the latest production to hit The Laurel Mill Playhouse’s main stage is a hoot! Directed by John D’Amato, this charming comedy captures the epitome of the television screenwriter’s golden era of funny. Based loosely in The Sid Caesar Show and his laughable team of loveable lunatic writers, the action unfolds inside the 23rd floor writer’s room for the ‘Max Price’ show where shenanigans, hysterics, and hilarity ensues. Smartly paced, organically expressed, and thoroughly entertaining, this is one for the books— the bank books that is— for if you could cash your laughs in for gold bricks you’d be filthy stinking rich before the intermission!

Director John D’Amato has unearthed a frozen snapshot of a 1953 television writer’s room and placed it on display of the main stage for everyone to see. D’Amato has worked several nods of homage into the minutia of the set, paying tribute to the great comedic inspirations of the time for The Sid Caesar Show (and others like it.) Black and white framed portraits of people like Buster Keaton, Charlie Chaplin, and Ernie Kovacs, are just a few featured on the walls. D’Amato’s most touching tribute, however, is the framed photograph of the original writing team of The Sid Caesar Show, mounted on the wall for anyone who’s Easter-egg hunting to find. The overall remaining design of the set is functionally simplistic, letting the actors bring forth the liberal doses of comedy penned into the script without the intense distractions of overly complex scenery.

D’Amato, Stage Manager Kathy McCrory, and the cast certainly don’t have a flare for their sartorial selections— they’ve a proper series of firework rockets designed to light up like the Fourth of July. The zany outfits that are both character and era appropriate speak volumes about the madness that doesn’t run but rather gallops through the mentality of these writers. The Milt Fields character in particular, whose wardrobe is provided solely by corresponding actor John Dignam, is as ludicrous as they come with outrageous patterns, poppy colors, and a smattering of silly accessories to complete the crazy couture. The Carol and Helen characters in particular are worth praising as well for their fitted dresses in cuts, prints, and colors that are well-fitted for an office gal of the early 1950’s.

The success of the production falls into the natural reality of the show’s inherent insanity, which D’Amato hones in on directly. These characters that Neil Simon has penned, based on real life titans of comedy, are so extraordinary that they cannot simply exist. D’Amato toes the fine line of making these characters vivaciously zany without pushing them too far into the stereotypical caricature presentation that could easily create feelings of artifice, forcing the comedy rather than letting it occur naturally. D’Amato also stays on top of the pacing; he keeps the scenes rolling, preventing those precarious pregnant pauses from ravaging the room by ensuring that they’re destroyed before they can fall. This, in addition to his keen sense of casting, allows the production to achieve its maximum comedic potential in an honest and organic manner.

Though the cast is three short of a dozen, they’re formulating funny faster than five times their numbers. With an intrinsic understanding of the group dynamic as well as the overall flow of the show, this cast of nine lets the humor happen; each moment breathed into the space is genuine, reflecting well the high functioning relationship of the cast as they progress from one scene to the next. Everyone plays their part divinely, knowing their role in this comedy contraption, and everyone plays gracefully with their counterparts. This, along with D’Amato’s strong scenic guidance and influential character development skills, makes for a practically perfect performance.

Though the character of Helen has just a sprinkling of quirky lines, Miranda Snyder delivers each one with a syrupy shimmer that showcases the epitome of a woman steeped deep in the stenographic pool of the 1950’s. Gooey and dippy in a delightful fashion, Snyder’s adorably bubbly personality and bubbleheaded delivery gets the giggles going every time she pops her head into the writer’s room. Much like the character of Brian Doyle (Bob Herbertson), Snyder’s character is a delightful cameo addition to the performance. Herbertson, whose character is part of the core writing team, adapts very quickly to be the observant fly on the wall sort, with a comic cough that gives a whole different voice to the smokers of the generation. Herbertson fits well among the others, adding his two bits of humorous heehaw here and there when necessary, largely so when expressing his temper at Ira.

Serving the dual function of silent reactionary and narrative conduit, Michael Parks gives the audience a working relationship with the Lucas Brinkman character. Modeled after Neil Simon, this zippy newbie character is delivered with ecstatic verve and gusto by way of Parks’ spirited portrayal. Honing in on the nuances of the New York accent circa 1953, Parks paints a convivial portrait of being the new guy amid seasoned sillies on the writer’s scene. There is a raw and approachable honesty in the way that Parks delivers his direct addresses to the audience. When he’s not connecting theatergoers to the inside happenings of the writer’s room, his wild facial expressions to every insane thing happening around him are perfectly priceless.

For all the maniacal madcap nonsense happening on stage there has to be a calming entity to add a little balance to the insanity. That smoothing balm comes in the form of Kenny (Joanna Andrus.) Scripted as a male character, Andrus takes the role and turns it into something wholly unique to the point where we forget completely that her character isn’t just one of the guys in the writer’s room. Collected and composed in a cool and clear fashion, Andrus delivers some of the more weighted lines of the text, creating an equilibrium among the cacophony of chaos crafted by the other players. Andrus levels the playing field when it comes to comedy, assembling a baseline of sincerity so that the others around her can soar to those caricature heights without overstepping their marker.

Thick with accent and overall absurd over pronunciation, Val Slotsky (Tim Evans)— modeled after Mel Tolkin— is a hoot, hands down. Evans affects a perfectly broken accent that traverses the Polish-Russian countryside giving him a unique and flavorful sound that adds to the humor of his character. Caught up in the mispronunciation of expletives, Evans works these verbally comedic bits into something of a frothy frenzy, playing exceptionally well against the other writers in the room, particularly when it comes to his exasperated nature over select subject matters.

Holding her own against the suits of the biz, Debra Kidwell tackles the character of Carol Wyman— modeled after real life comediennes Lucille Kallen and Selma Diamond— with vigorous aplomb. With a ball-busting approach to her brassy personality, Kidwell masterfully delivers a flawless hybrid of a 1950’s Trans-Atlantic accent mellowed into big city New York Doll sound without the saccharine coating of a lass who’s been lost in lady-land. Her patois and rhythmic speech patterns are impeccable and the zesty edge with which she imbues her portrayal is titillating. Going toe to toe against John Dignam’s Milt Fields (a fictional version of Sheldon Keller), Kidwell vies for the title of King of Comedic Timing and lands in a deadlock tie with Dignam in this race.

Dignam, whose zippy one-liners are as outrageous as his wardrobe, is a snappy addition to the cast. Displaying an unfathomably rich understanding of comedic delivery and timing, much like Kidwell, he lands each joke with perfection. Relying heavily on his ability to spin comedy from just a few golden words, Dignam becomes a regular zinger, snapping and firing his way through a hilarious series of situational instances that are too funny to describe. Adding to his character’s humorous existence, Dignam brings a ripe physicality to the comedy game as well, creating some truly hysterical moments of laughter when he starts engaging his full body into the routine.

Stealing the scene for however briefly he’s in it, Win Britt is all but channeling the spirit of Mel Brooks (impossible only because Brooks is still alive) into his fabrication of Ira Stone. Spastic, panicked, and physically engaged in the neurotic behavior that accompanies the character, Britt is an uproarious scream of a good time. A perpetual plague of insanity in unyielding motion, particularly when it comes to circling around the space, his comic shenanigans are the stuff from which gut-busting belly laughs are made. Affecting the stereotypical Jewish comedy shtick to his character, Britt lands laugh after laugh all throughout the evening by putzing and puttering his way through various situations. An all-around atrocity of epically hilarious proportions, Britt is a champion of physical and verbal humor and runs away with his scenes leaving in his wake a great cloud of comedic dust.

Max Price (Jeff Murray) is a giant, a goliath with so much greatness in him that one stage can hardly contain it all. Murray owns the role from the moment he steps foot onto the stage. If the whacky photograph with his zany eyeballs popping out of their skull mounted on the wall wasn’t enough, the lively mismatched nature he brings to the character’s physicality just takes the cake. Juggling the many facets of the character— from barking mad to flagrantly effeminate in certain moments to deliciously drunk— Murray is the master of madcap nonsense in this production. Traversing a wide spectrum of comedic flavors, Murray pulls all of his seasoned tricks into his trade and plies the audience liberally with every funny tactic he knows when embodying Max Price.

So if I can only put two lousy words down on paper— “MUST SEE”— because those are the two words that are most important when it comes to Laurel Mill Playhouse’s Laughter on the 23rd Floor.

Laughter on the 23rd Floor plays through March 12, 2017 at The Laurel Mill Playhouse located in the heart of historic downtown Laurel at 508 Main Street, Laurel, MD. For tickets call the box office at (301) 617-9906 or purchase them online.