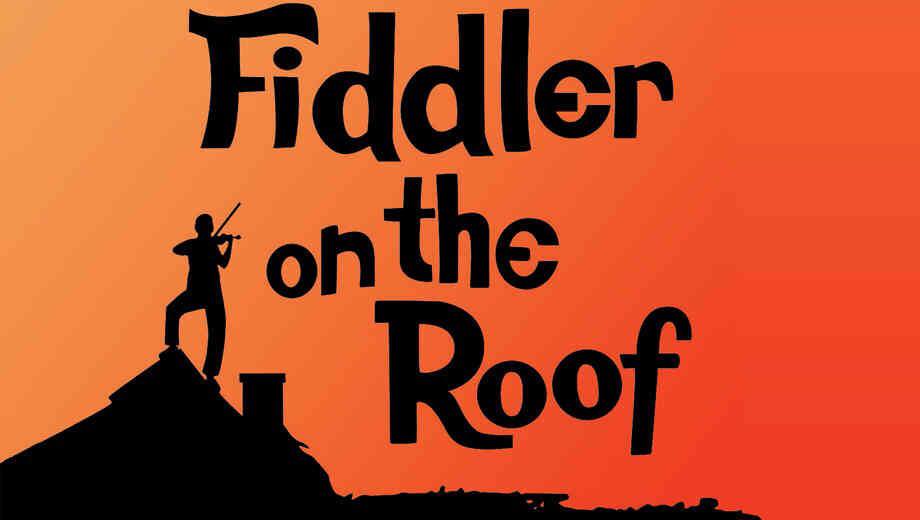 The papas! The mammas! The daughters! The sons! They’re all there as tradition would dictate— but! This isn’t your grandfather’s Fiddler on the Roof happening as Third Wall Productions approaches its one-year anniversary! Directed by Lance Bankerd, with Musical Direction by Edward Berlett, this reimagined production of a time-weathered classic is an innovative look at how the flower that blooms in adversity is the rarest and most beautiful of all. Pulling the production out of the dreary, down-trodden earthen aesthetical mire that is so often tradition for Fiddler on the Roof, Third Wall Productions is providing a radical and much appreciated new perspective that’s as unusual and yet fascinating as the titular character itself.

What’s happening to tradition? Director Lance Bankerd’s vision is spinning a vibrant new tapestry with that one little thread of inspiration pulled out from a time-woven tale. With exacting dramaturgical research for the period, Bankerd has informed the show’s overall aesthetic approach with the artwork of the time, shtetl paintings from artists like Ari Rousimoff, Shoshana Eden, and Chaim Goldberg hanging in the staircase corridor as you enter the theatre. These paintings, so full of vibrant colors and inspired by the impressionists of the time, serve as the color palette influence to the production, fully encompassing the joy of the Jewish tradition and spirit even when circumstances do not allow for such an outward expression.

Bankerd’s vision goes beyond just a change in the scenery. As a great deal of the musical takes place in the village square of Anatevka, so too does this production. Opting for staging in the round, Bankerd invites the audience into the village of Anatevka for a fully immersive experience. With intimate blocking, and the simple but precise Choreography of Kali Baklor in play, audience members feel as if this could be their village. The ghosts which appear in Tevye’s Dream sequence are all but in your lap sending chills of a hilarious nature up the spine. Mordcha (Thomas G. Rendulic) the Innkeeper— whose work in the role and in the ensemble is quite the quintessential representation of a true Jewish villager—  will be pouring you schnapps for “To Life” and the show’s conclusion will strike you on a personal level simply because the performers are standing but inches from you as they deliver this heartfelt tale. But it’s more than just a physical closeness. Bankerd has redirected the approach of the show’s narrative to be an inclusive one. The villagers, the lovers, the daughters, even Tevye— are no longer talking at you but talking to you. In this way the story becomes immersive, a truly unique approach to Fiddler particularly in this quaint and intimate space.

Carrying on in this vein of immersion, Bankerd sees to it that Costume Designer Sally Kahn outfits both the live orchestra, stacked “up on the roof” behind one of the seating banks, as well as the ushers in Anatevkan villager clothes. Kahn’s sartorial selections for the show follow tradition in the style of clothing, but the colors are once again influenced by the great vibrant ones found in the artists of the time. Instead of dull, drab, and dreary monochromatic grays, browns, whites, and blacks, the wardrobe of the cast is filled with rich colors of the natural earth including glistening jewel tones and floral selections. This is a vivacious representation of the joy and faith of the Jewish people, matching wholeheartedly the beauty of the set.

Fabricated by resident Set Designer Jordan Hollet, and Painted by Artists Ann Pallank, Amy Rudai, and Emma Hawthorn, the scenic backdrop for this production of Fiddler on the Roof is splashed liberally with color. Mesmerizing and wondrous in their vivid depiction of the natural surroundings, the scenic paint work of Pallank, Rudai, and Hawthorn is astonishing. Not only do the full wall-length murals encase the production’s in-the-round play space, but these lines of impressionist style color squiggles cover all the furnishings. The most notably striking piece of scenery is Tevye’s wagon, which has a sunrise and a sunset painted into each of the wheels, symbolically representing how the wheels of time keep on turning and life continues to roll along.

All of these wonderful and lively colorful design elements are tied together under the Lighting Design work of Jim Shomo. Using deep blues for more morose musical numbers and UV lights to glow out the Dream Sequence, as well as a heinously bright yellow the morning of Tevye’s hangover after “To Life”, Shomo finds ways to augment the color and the pathos of the scene as they occur in live time around the stage. In particular the use of UV lighting during “Tevye’s Dream” creates a spectacular affair, between the ghosts and their blood dripped shrouds reacting under the light and Bankerd’s overall approach to the scene— which involves a rolling bed— there is something magical about it in a most theatrical fashion.

Pit Conductor Andrew Zile leads the nearly dozen person orchestra to a great deal of success throughout the show, carefully navigating the treacherous waters of the Klezmer style score. Keeping the tempo for a large cast is no small feat, but it is one that Zile does exceedingly well, even if there are a few little hiccups and out of synch moments. Zile’s ability to balance the orchestra, to keep them from overplaying the performers (despite the performers being mic’d) is equally impressive as this is not an issue from the show’s opening to the conclusion. Sharing the conductor’s space— atop the roof— with the actual Fiddler on the Roof, Jonathan Goren, Zile blends in with the Anatevkans and holds his own against the tumultuous score throughout the production. Goren deserves a great nod of praise as the title representation with his flawless fiddle skills coming into play sublimely. Goren showcases his impressive ability to jazz up the music during the tail end of “To Life” and the vamp that follows Tevye into the street with a solo feature that is delightful. Watch his playing throughout as it is as enchanting as the glorious paintings featured behind the orchestra.

Musical Director Edward Berlett derives a tremendously full sound out of the cast, which is excellent considering the number of people included. “Tradition” and surprisingly “Sabbath Prayer” are full of joy and spiritual light, though in varying tones, and are great representations of the way Berlett crafts harmonies among the cast. Choreographing chaos amid the threads of Baklor’s choreography and Bankerd’s blocking, Berlett keeps the overall sound of the ensemble clean in these moments.

Everyone finds a home for their voice and their character work in this inviting new production of Fiddler on the Roof. Whether it’s Michelle Hosier playing Grandma Tzeitel during “Tevye’s Dream”— with a perfectly affected sound that still delivers lyrical clarity and quality when she sings— to Kali Baklor as Fruma-Sarah in that same number, belting and wailing away at the top of her lungs; the cast are part of well-oiled ensemble each having their moment to shine. Perhaps its Stu Needel— playing both the cherished town Rabbi and the loathed Russian constable— who will catch your eye and ear with his bold belting sound during “To Life” or his milder spiritual sound during “Sabbath Prayer.” Even Emma Hawthorn— who play’s Yente the Matchmaker, right? Of course right!— finds a haphazard way to infuse comedy into her character, making her a perfect match for the role.

Tevye is blessed with five daughters: Bielke (Ann Elliott), Shprintze (Grace Volpe), Chava (Alex Clasing), Hodel (Mea C. Holloway), and Tzeitel (Lauren DeSha.) While Elliott and Volpe’s character do not have featured vocal solos, they are chipper and sprightly like excited young children ought to be, especially when celebrating at the wedding scene. And although Clasing’s character is also not afforded much by the way of a solo, her voice is dulcet and sublime pairing with Holloway during their duets featured in “Matchmaker, Matchmaker.” Here too is DeSha’s chance to showcase her vocal and character spirit as she takes to teasing her sisters in the number. Holloway as Hodel, the only of Tevye’s five daughters to receive a full solo number, presents a wounded and heavy pathos percolating in her voice for “Far From the Home I Love.”

Though Holloway’s solo is downtrodden and steeped in heartache, the way she plays with Perchik (Joe Weinhoffer) is quite cheeky and amusing. The two share quips and banters which quickly evolve into strong feelings for one another. While Weinhoffer has a few pitch issues, which will adjust as the run progresses, his characterization of the revolutionary scholar is inspiring and charged with a conflagration the could charge into the world-changing work of which his character so often speaks. This shows in strong opposition to the mousy Motel the Tailor (Daniel Plante) who all but trips over his own two feet and lips anytime he’s forced to confront Tevye. Plante’s voice is robust and full, soaring away with ecstatic delight for “Miracle of Miracles” once he wins over the victory in the name of love. Not to be forgot, though also lacking in vocal solos, Jake Schwartz takes up the role of Fyedka, making for a charming, albeit reserved, counterpart to Chava in the production.

Robust of spirit is the Butcher, Lazar Wolf (Michael Zellhofer) who is boisterous, bold, and booming in his duet with Tevye, “To Life.” This becomes a group celebration number— for all including the audience— and the richness of his character. Not to be outdone, however, Golde (Jenifer Grundy-Hollett) takes the cake for being the biggest mouthpiece in Anatevka. Brassy and full of zest, and fully outfitted in colors that match the punchy personality of her portrayal, Grundy-Hollett is quite passionate in the way she handles Golde. Versatile in her ability to mellow that brash personality into something sweet for both “Sunrise, Sunset” and “Do You Love Me”— both duets shared with Tevye, Grundy-Hollett works her own set of miracles in the role.

Tradition dictates that Tevye be big of voice, bold of personality, strong of faith, and quick on his feet; Roger Schulman fits the bill in all departments making for an archetypal Dairyman. His performance, however, is not the standard stagnate schlop that one expects after having seen Fiddler half a dozen times or more in recent years. Convivial in an emotionally forward and progressive fashion, Schulman is mindfully aware and fully present in his regard to spatial relationships both with other characters and his audience, who is now a part of Anatevka. With a sturdy booming sound, numbers like “If I Were a Rich Man” and “To Life” still maintain the heart that audiences expect of these songs but thrive in a new vein under Schulman’s care. It’s his asides to God and all listening that make the difference in his portrayal of Tevye. These moments are bursting with emotional turmoil and consternation, perpetually pushing the plot forward in a way most intriguing, making him a well-rounded Tevye in addition to being a historical representation of one.

Tradition! Tradition dictates that at the end of a good show we send you on your way to see it, right? Of course right! Head to Anatevka and become a part of the immersive Fiddler experience before the Russians move them along and it’s too late.

Fiddler on the Roof plays through February 26, 2017 with Third Wall Productions at the Episcopal Church of the Messiah— 5801 Hartford Road in Baltimore’s Hamilton neighborhood. Tickets are on sale now and can be purchased by calling 443-838-4064 or purchasing them online.