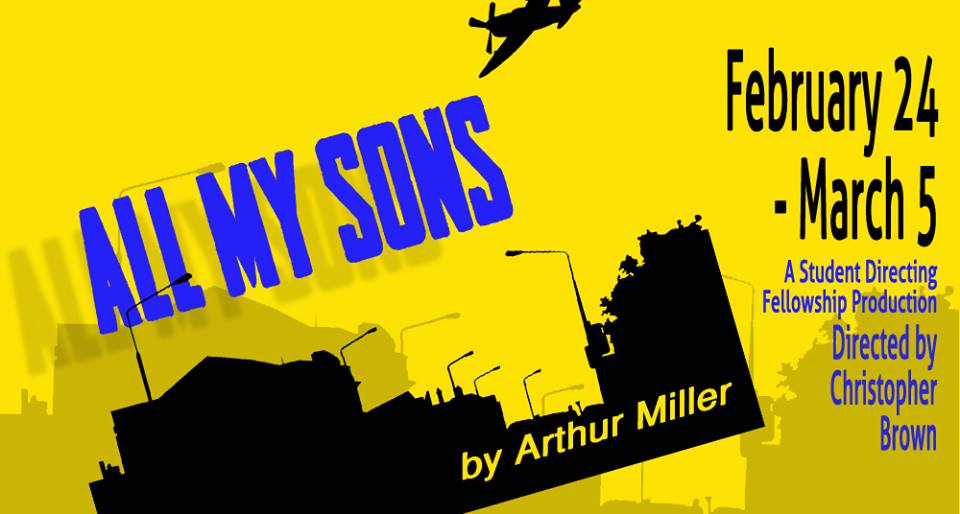 There is a universe of people outside and you’re responsible for it. A profound life learning lesson, far deeper than the simple application of the butterfly effect. In a time-honored American dramatic classic, The Students’ Theatre of The Highwood Theatre bring an all-student production of Arthur Miller’s All My Sons to the stage and it nothing short of phenomenal. Directed by Christopher Brown, this evocative and gripping drama in three acts spins the story of the aftermath of war— the lesser acknowledged All-American struggle that all too often accompanies that coveted All-American dream. Rich with exceptionally well-developed characters and moments wound tight with dramatic tension, the production keeps you perched at the edge of your seat from beginning to end in a way that exudes the utmost professional quality.

The Students’ Theatre of The Highwood Theatre presents a unique opportunity for students to cultivate a production entirely on their own— everything from casting, directing, and performing in the production, to designing and running tech and crew. The level of professional finesse that accompanies this production of All My Sons is astonishing; the precision of pacing, the detailed nuances of design elements, the intensity with which the characters are animated, all far surpass the standards of a student-run production.

The striking layout of the set is the first thing that greats the audience upon entering the space. Set Designer Toly Yarup (with the assistance of company founder Kevin Kearney) creates the backyard landscape of the Keller family over a three-quarters thrust approach, lining the audience around the faux grass and stepping stones as if they were meant to be the fence posts that contain the yard itself. This is a brilliant approach to fully immersing the audience in the dramatic mire of the show without dissolving that much-needed sense of the fourth wall when it comes to the works of Arthur Miller. Enhancing this experience on both a metaphorical level and a practical one, Lighting Designer Simon Ellerbe has constructed bright pockets of sunlight and moonlight to depict temporal shifts throughout the performance. Each audience member receives a pair of sunglasses as the top of the show and is encouraged to wear them as the yellow, orange, and amber lights shift like the sun throughout the play. This creates a sense of realism for the overall experience and keeps the unique audience setup from having light-blinded viewing obstructions.

Properties Designer Jason Reid deserves a nod for all of the intricate little things fitted here and there to further ground the show in its place in time. Creating a broad scope of post-World War II living, Costume Designer Tip Letsche outfits the company in styles appropriately suited for the mid to late 1940’s. The dresses, in particular those seen on Ann, are Letsche’s great success, flatteringly fitted for all the ladies in the performance, but particularly for Ann. The guys’ garments are equally well nestled into the style of the time and the overall appropriation of little details, like suspenders and hats, expresses how thoroughly Letsche has done proper research for the production.

Creating a compelling theatrical masterpiece is no small task, even when the play itself is that of Arthur Miller’s commercially successful genius. Directed Christopher Brown hones in on the emotional nuances of the production, really encouraging full development of these dynamic characters across the board. Brown tends these emotional journeys like a gardener tending his roses, maintaining them in the peak of bloom so that when pivotal moments of catharsis are achieved, they feel truly organic and utterly natural. Brown also has an exacting understanding of pacing as well as channeled energies. Keeping the show moving forward without rushing while simultaneously allowing each performer to exude differing levels of emotional energetic charge into their deliveries is what keeps the audience hanging on every word of this momentous build from the midpoint of the first act through to the end of the performance.

Precocious little Bert (Alexander DeSimone) may only appear briefly in the early scenes, but his rather rambunctious yet completely adorable presence is much too precious for proper description. There are other characters who spend precious little time in the scene, per Miller’s writing, as well. Frank Lubey (Angel Soriano) and wife Lydia (Sydney Acuff, who doubles as the Doctor’s wife Sue) are briefly encountered but both make their presence known. Soriano is convivial to the utmost, delivering his lighthearted lines, fleeting like the fond smell of a home-cooked meal. Acuff, who is delightfully simple as Lydia, shows a much coarser turn of character when playing Doctor Bayliss’ wife, creating quite the contrast between her sweet and basic housewife in Lydia and the bitter and defensive crone that is Sue.

George (Hellen De Oliveira) whose arrival is as sudden as his departure, is another supporting character who drives disturbing amounts of tension into the scene. De Oliveira gives a powerful performance, particularly when it comes to keeping a lid on the character’s emotional outbursts. Driving a great deal of the dramatic build in the scene between the George and Chris characters, once they encounter one another and bits of the truth start to unfurl, De Oliveira masterfully presents the character’s angst in a way that is both believable and true to George’s nature.

Doctor Jim Bayliss (Danny Fitz Tran Ho) is of a similar nature when it comes to existing in the play, though in complete opposition to the way George is received. Ho treats the character of Jim as a balm, a voice of reason, and a dose of reality when it comes to the internal chaos that is perpetually brewing in the Keller’s backyard. Though his scenes are limited, like many of the side-plot characters in All My Sons, Ho makes the most of his time spent on stage and gives the audience an honest sense of his presence and overall relationship to the other characters as well as the piece itself.

Joe Keller (Asa Kienitz-Kincade) is merely attempting to keep sanity fenced in his backyard, just trying to ‘see it human’ as it were. But this is a daunting, nigh impossible task for Kienitz-Kincade as insanity gallops wildly about like a field of horses at Belmont on race day. Kienitz-Kincade approaches the character of Joe in a gentle fashion, laying easily into the comedic relief that the passive character has to offer. Quirky and off-kilter just trying to not upset the apple cart, Kienitz-Kincade presents Joe with a charming, albeit aged, eccentricity to him, all masterfully disguising the deeper issues at hand when it comes to the character’s major flaws. Capable of some truly striking emotional breakdowns, Kienitz-Kincade delivers a shocking series of explosions in the second and third act that are beyond harrowing.

But the crown of emotional ecstasy and cathartic release is worn by Chris Keller (Alex Heywood) as right from the beginning of the show there is a maelstrom of pathos swirling about at his center, waiting for the precise moment to unleash. That moment comes as an unrelenting emotional torrent, thundering from Heywood at the end of the second act with such vehement force that it is all but blindsiding, causing a full-on emotional concussion as he goes after Joe with his words. Heywood and Kienitz-Kincade have brutally harrowing moments shared between them that punch hard at the gut, steal the breath from the chest, and ultimately squeeze the heart until it bleeds with sympathy and compassion. Heywood has an exceptional presence of mind and a keen understanding of how to speak the language of the era without modernizing it.

Presenting herself as the epitome of a mid-1940’s woman, Ann (Rachel Sparks) falls in step with the rest of the performance from the moment she steps into the back yard. Sparks is idyllic; she comports herself like a woman frozen from that exact decade, everything from her posture, the way she sits, the way she watches Chris speak, to the way she responds with her own perfected cadence and hint of a Trans-Atlantic accent— it creates a solid connecting thread to the play’s period. Her emotional expression is reserved, slipping away in little bouts as the text demands it, making her intriguing to watch whether she’s arguing or simply agreeing. Sharing the feminine dramatic burden of the show with Kate (Victoria Sova), Sparks’ pulls the audience into the drama and keeps them living it with every moment that she lives it.

Utterly untethered from her own sanity with shreds of it surfacing in little moments of speech, Victoria Sova’s presentation of Kate Keller is heart wrenching. Presenting a fully articulate and deeply delved character study in a lack of closure, Sova unabashedly expresses the character’s grief in every conceivable fashion. Unhinged from the crippling reality that Larry will never come home, her moments of anger, sorrow, frustration, guilt, and a host of many other negative pathos, come soaring out of her like a fast-fused rocket waiting to launch. Holding her own against each of the other leading performance, Sova’s performance is mind-blowing and does a number on the soul as well.

Truly a remarkable production, this polished presentation of Arthur Miller is striking beyond compare and far surpasses what is expected of youth theatre. Exceptional is the word that comes readily to mind; All My Sons is a must-see drama this 2017 season.

All My Sons plays through March 5, 2017 with The Students’ Theatre at The Highwood Theatre— 914 Silver Spring Avenue located in the heart of Downtown Silver Spring, MD. For tickets call the box office at (301) 587-0697 or purchase them online.

Boeing Boeing at The Highwood Theatre

Review: Sons of the Prophet at Theater J
Close