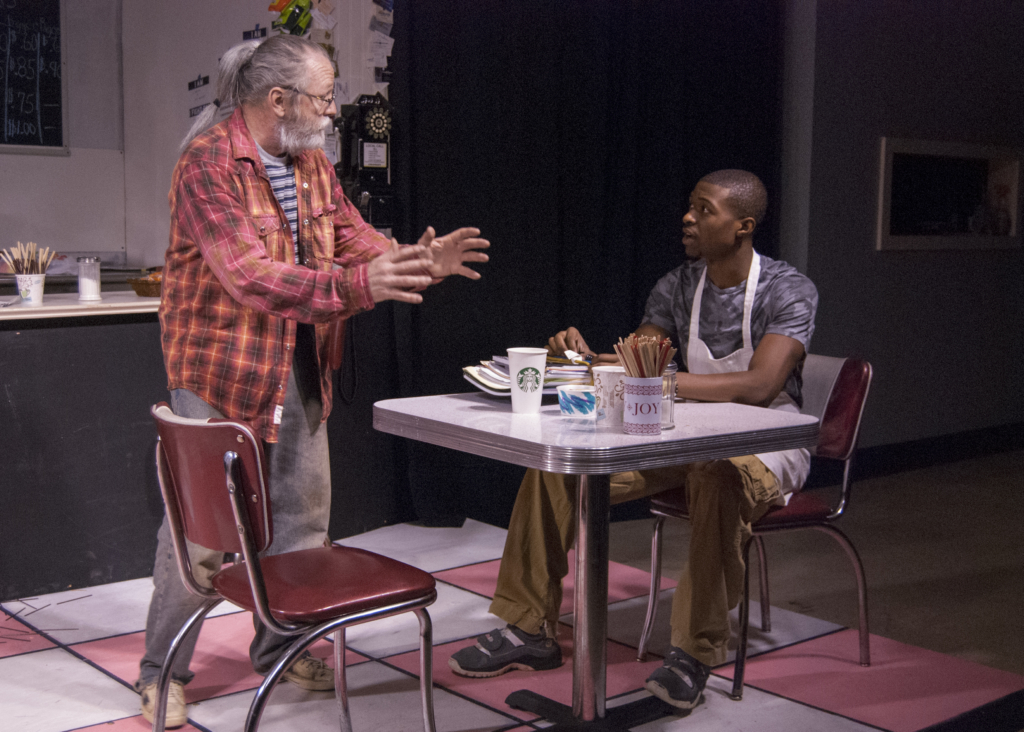 Donuts are not your life. Donuts are nobody’s life. Your life is your life. A life with a theatre. A life with a theatre and a production of Tracy Letts’ Superior Donuts. Third Wall Productions has got something special on their hands, and it ain’t horse fat! Directed by Grant Myers, this evocative drama with uplifting heart is remarkably well executed by the company and showcases the heart of human compassion at its finest. There is living to do, learning to do, loving to do and it can be done even in the darkest of circumstances.

Director Grant Myers envisions a set that is the epitome of a grungy, run-down, donut shop in Chicago, struggling to get by on a city block as Starbucks pops up all around it. There is a striking authenticity to the scenic design work and the exacting nuance and attention to detail is enhanced tremendously by Properties Mistress Emma Hawthorn. The overall aesthetic is tacky and neglected but well serves the notion that the shop has been in disrepair, much like the functionality of the main protagonist’s life. Personalizing the set, Myers and Hawthorn allow the actors and friends of Third Wall to further connect to the production with hidden Easter eggs in the décor.

Though Myers’ pacing of the performance is impressive— the show clips along quite swiftly— and the cast proves themselves to be more than capable when it comes to all the bumps and bruises of live theatre (watching a cast improv and cover practically flawlessly over unpredictable and accidental scenic mishaps to the point of feeling like they were humorously intended by the playwright is an exceptionally delightful thing at which this cast excels), there is something lacking in the technical element of the show’s overall structure. Because of the way playwright Tracy Letts has crafted the script, with the narrative character of Arthur going in and out of the play’s real time by way of monologues in direct address to the audience, the technical elements are begging for inclusion. Whether it be a sound cue or a more dramatic lighting shift or effect, something needs to happen to delineate these transitions to add clarity to these moments. Without such effects, there feels to be a jumbled sense of confusion whenever Arthur starts one of these addresses. Despite this lone fault in the production design, Myers brings a solid cast and motivated pacing to the forefront of the evening’s activities.

Myers, who doubles up as the show’s Costume Designer, also deserves a nod of praise for his highly appropriate sartorial selections. While the setting is present day, or thereabouts, the costumes in this case are defined by the characters they represent and vice versa. The most prominent instance of this notion comes from the outfit Myers chooses for Lady. Bedraggled in a series of mismatched hodgepodgery, the various layers and outlandish threads bedecked upon the character create a sense of authenticity when it comes to considering the life on the streets that she lives. The remainder of the costumes are far more subdued, but fit the bill accordingly, with things like the heavy fur-eared cop caps given an extra layer of understanding to the daily existence of Chicago’s frigid winters for the officer on the street beat.

Displaying a remarkably felicitous understanding of how to work a cameo character, William Zellhofer, who plays Kiril Ivakin for but a moment near the play’s conclusion, takes his two seconds in the spotlight gracefully but tenaciously. Less is often more in the case of a cameo character and Zellhofer proves this with his mindful presence in the two scenes in which he appears. Less cameo and more antagonist, both Kevin (Chip Willett) and Luther Flynn (Bill Brisbee) present a similar presence of mind when it comes to their brief stage interactions. Willet throws a biting attitude a mile long, which suits the nature of his character, while Brisbee takes a ‘cooler cat’ approach to his bad guy routine. Brisbee should be praised for his tight fight choreography in the penultimate scene of the production, which features an intense round of violence between his character and Arthur Przybyszewski.

Officers Randy Osteen (Tracey Grimes) and James Bailey (J. Purnell Hargrove) bring a sense of law and order to the production as well as lively and convivial individuality. Hargrove showcases his dramatic strength by playing the character with a sharp edge, a heavy severity, and an overall straight-lined approach. This is particularly poignant in some of the near-altercations in which his character finds himself. Grimes, as the lady cop, is congenial and sweet, carrying a moment of spectacular rage at Hargrove’s character near the show’s midpoint. This emotional expression strengthens the dynamic that she brings to her character, and furthers the exploration of her interactions with Arthur.

With thick Russian accent, very consistent, Michael Zellhofer tackles the role of Max Tarasov, owner of DVD shop next door. With a robust handle on Max’s personality, Zellhofer takes up all the oxygen in the room every time he interacts with either Arthur or the Officers. There is an honesty to his larger than life personality, and complimented by the stalwart accuracy and consistency of his Russian accent, and by proxy the stilted patois of his textual delivery, Zellhofer brings a boisterous spirit to the production.

Emma Hawthorn takes the cake a regular scene-stealing character. Fully invested in the character of Lady— a homeless wino of the streets— Hawthorn generates a portrayal that feels natural, free of artifice and stereotype. It would be all too easy to create a caricature and overplay Lady but Hawthorn finds an exacting balance which makes her portrayal sincere and moving as well as humorous at precisely the right moment. With crisp delivery on her lines, especially the character’s iconic “what’s that?” in reference to her hearing impairment, Hawthorn livens up the production tenfold with her fully developed character work.

Franco Wicks (Isaiah Evans) is the perfectly crafted foil to Arthur Przybyszewski (Ed Higgins.) Tracy Letts’ rich characters lend themselves to full dynamic development, a factor which Evans and Higgins take full advantage of to truly illustrate their character arcs. Evans, who is an energetic youth, creates a striking contrast to Higgins’ jaded draft-evading counter-culture immersed hippie. Because Higgins focuses on the paranoid and aloof aspect of the character, and is consequently extremely mild, albeit physically squirrely, it shifts the dynamic between them a great deal. Evans internalizes much of the indefatigable energy that Letts has penned into the character of Franco, but does so in a way that it is still highly palpable if not entirely visible. The pairs interactions are quite impressive, especially in the tumultuous way in which they shift about as the scenes progress forward.

Quickly becoming a new-wave American classic, Superior Donuts is an exceptional play and the Third Wall Productions current production is a great chance to take it in, appreciate it, and explore the wonders that theatre can still do for its audience.

Superior Donuts plays through January 29, 2017 with Third Wall Productions at the Episcopal Church of the Messiah— 5801 Hartford Road in Baltimore’s Hamilton neighborhood. Tickets are on sale now and can be purchased by calling 443-838-4064 or purchasing them online.

Superior Donuts at Colonial Players of Annapolis by Amanda Gunther