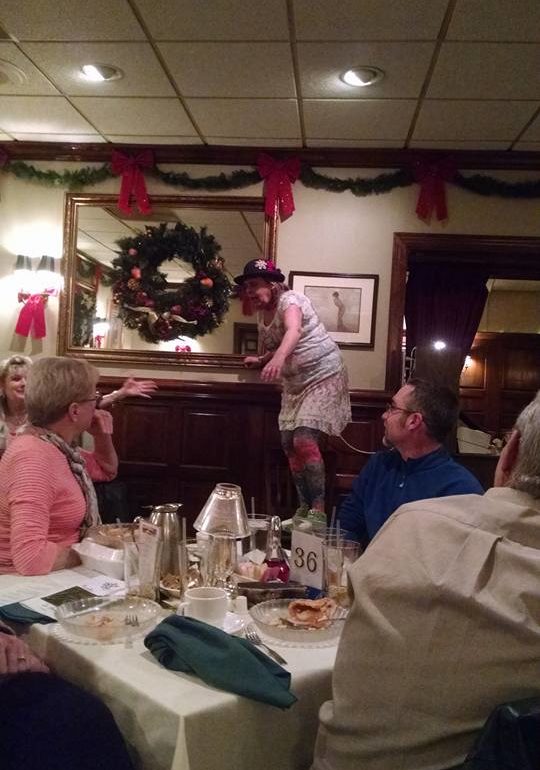 All the world seems in tune, on a spring afternoon— when we’re poisoning pigeons in the park! Only, we’re not poisoning pigeons so much as boring humans to death. And not the yawn and snooze type of bore— but the bloody, gut-stabbing sort of bore, like you a might with a tree-borer. The sun is shining bright and everything seems all right as Do or Die Mysteries presents Murder in the Park, Written and Directed by Ceej Crowe. Greenway Park has fallen under ominous threat when a new corporation— Grump Industries— plans to purchase, privatize, and subsequently bulldoze the natural features of the park— like trees and other wildlife— in favor of a flashy, cash-cow-style amusement park. Former and Future Mayor Howie Callahan is determined to protect the park by any means necessary.

On the night of the incident, where all the volunteers of Greenway Park have gathered for the Annual Volunteer-of-the-Year celebration, something goes awry and one of the park volunteers ends up— bored to death! In this zany adventure of politics and personal agendas, it’s up to the audience to participate in the interactive murder mystery and find out whodunit! Ceej Crowe’s character in this particular script are par for the course when it comes to pun names and wild caricatures of entertainment to be had. The jokes are hard and fast and make for a splendid time when it comes to enjoying mysterious murders!

With a full cast of six, the whole gang is covered, from slightly skeevy politicians, to seriously warped old huntsmen of the woods. Colorful characters are Crowe’s strong suit when it comes to writing and the loose framework that she gives to each member of the cast allows the performers a great deal of room to play, develop, stretch, and imaginatively expand these characters into fundamental cornerstones of the experience, who simply put the ‘fun’ in dysfunctional!

Played by Cybele Pomeroy, the Park Manager, who is just a little on the dotty and confused side, is just trying to keep the volunteers happy. After all, isn’t the volunteers who keep the park up and running? Mellow in an indecisive fashion, Pomeroy takes the character of the Park Manager and just lets her settle naturally into the park surroundings, staying out of the way of chaos and conflict. Passive and mild-mannered, Pomeroy’s Park Manager is quite subdued, especially when it comes to a few of the kookier characters featured in the script. Pomeroy does get a few moments of wildly affected play when it comes to her aversion to blood. It makes her squeamish, dizzy, and almost completely ready to faint! So naturally, someone with a serious reaction like that to blood couldn’t be responsible for a gruesome and bloody murder. Because that’s an airtight alibi, isn’t it?

Spastic, frenetic, and lovingly nicknamed ‘in-need-of-Adderall’, Matt Wetzel crafts Park Ranger Terry Naught with a Poindexter finesse and a frantically spasmodic energy that will not quit. It’s exhausting just watching Wetzel wend his way through the crowd, eagerly chasing after B.J. Carlson to make sure she’s safe, and maniacally trying to keep things under control. With indefatigable energy, Wetzel brings enough life to the party to resurrect the dead, which in this case might not be such a bad thing. As described by another character, “peppy Christopher Robin hopped up on LSD”, Wetzel captures both the iconic and boyish charm of a nerdy and well-meaning dutiful young lad with all the energy of 1,000 buzzing bees zipping about trying to frantically pollinate a field of flowers before a storm. Physically committed to the character’s development, Wetzel even adds a hilariously priceless mincing run that has his character dashing all over the room. How could someone so sweet and innocent and protective be guilty of murder? Or does all that extra energy have to go so somewhere at the end of the day?

Like all politicians, Howie Callahan— played by Charles Boyington— is clueless, out for his own agenda, and racking up the skeletons in the closet something fierce. Stereotypically chipper and effusively invested on winning over the love of all in attendance, this former-and-future mayor is out to preserve Greenway Park because he so desperately loves the trees. Poised, polished, and a bit more flamboyant than his closeted lifestyle might prefer to lead on, Boyington handles this political figure with ease. Snatching up the line of the show and delivering it to hysterical laughter, “Ivana, you’re not a Birch, you’re a bitch!”, Boyington gets the applause he deserves for such rigorous gusto. But surely a politician wouldn’t dare dirty his own hands in something so traceable as murder, would he?

Pronounce like the French, and not the paraphernalia it’s trying so hard not to be, Miss Dubey— played resplendently by Ceej Crowe— is not only a volunteer to the park but her property borders its borders. Crowe, hands down, wins show-stealer with his cracked-banana character portrayal of Paula. Unafraid to go wherever the whim of the audience takes her, Crowe plays the character with broad openness, which lends itself to the drunken-stoner-artist palette that has formed Paula’s narrative skeleton. Truly the most interactive of characters, and desperate to win the “Volunteer-of-the-Year” award, as it may or may not have been promised to her from the year previous, there is something to be said for someone who wants something so bad she can taste it. Then again, that might just be all the special brownies and late night painting adventures on park property that she’s tasting. Either way— murderer or not— Crowe masters this improvisation with fantastical aplomb and really wins the show in regards to being available for the audience’s enjoyment.

It’s the silent type you have to watch out for and Thoma Windborg— played by Stephen Kirkpatrick— is definitely of those types. A suspiciously quiet character, not unlike Ezekiel Foster of White Christmas for those playing along from the musical theatre realm, Kirkpatrick keeps his dialogue exchanges simple and in doing so, speaks volumes about his character’s motivations and intentions. Kirkpatrick’s work as Thoma is actually some of the most enjoyable presented over the course of the evening as you really have to pay attention to how he responds to comments and other situations. His interactions with the audience are on point, especially when he gets going about the NRA and his guns. Like all actors in live-improv style theatre, there is a moment that threatens to ‘crack’ the character from the actor when things get silly, and at this performance the moment fell during one of Kirkpatrick’s exchanges. But like a super trooper, he held it together and carried on with the scene, sublimely.

There’s no denying that Erin Tarpley makes a good villainess. There’s even less denying that the audience seems to delight when things turn round about to give her characters’ their comeuppance. Cheeky and slippery like an eel, Tarpley takes Ivana Birch down a different forest path from some of her more nasally and vocally affected portrayals of characters. This exploration of Ivana works exceedingly well with the script and gives Tarpley a chance to flesh out the dimensions of someone who could very easily be flat and boring. Of course, a little tree-boring certainly might liven things up for Tarpley’s character. Ruthless, vicious, and cold, there’s no reason to not suspect her in this heinous crime, unless of course, she’s the one that gets the bore!

Whodunit? Well, that is something that simply cannot be revealed. You’ll have to come along to The Sunset and find out for yourself. Was it the confused Park Manager with an aversion to blood? Or perhaps the spastically motivated and enthusiastic Park Ranger who just wants to keep his job and keep everything running smoothly? Maybe it was one of the four park volunteers all fighting over the “Volunteer-of-the-Year” award. Whoever it was, it’s bound to be a bloody good time for all!

Murder in the Park plays Monday January 16, 2017 at The Sunset Restaurant and Lounge— 625 Greenway Road SE in Glen Burnie, MD, where Do or Die Mysteries are currently in residence. Reservations are required and tickets are available for purchase by calling (443) 442- 3810 or by purchasing them online.