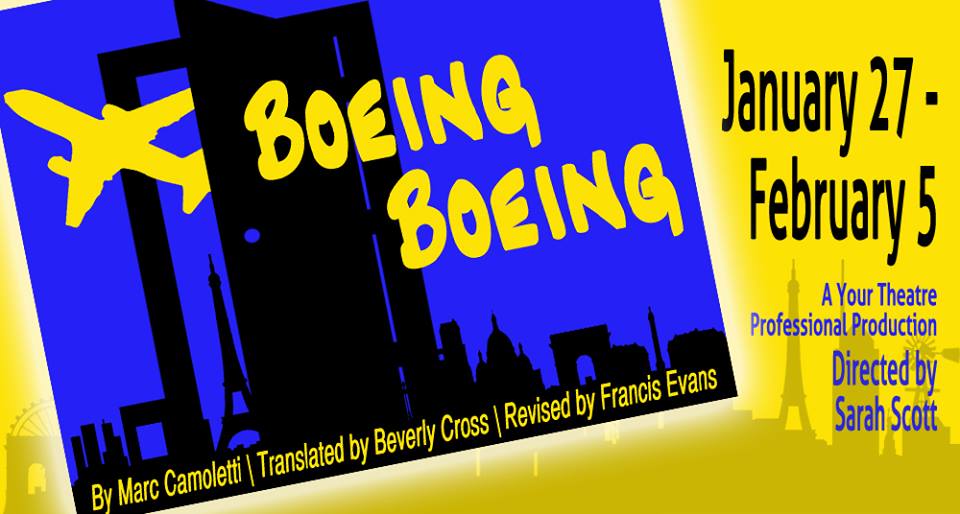 Variety is the spice of life. An American aperitif, an Italian main course, and a German dessert, who could choose? But what if one didn’t have to? What if the proverbial cake could be had and eaten too? And all thanks to the singular brilliance of the time tables, the airline timetables that is. Three fiancés, one hedonistic bachelor, his neurotic friend, and a fed-up French maid surely spells disaster. Don’t panic. It simply means Boeing Boeing is taking flight at The Highwood Theatre. Directed by Sarah Scott, as a Your Theatre Professional Production, this fantastic farce has everything you need for a hysterical evening at the theatre. It’s got slamming doors, three fabulous femme fatales, a plot to drive you wild, there’s even a saucy and sarcastic French maid! All this coming and going will keep you tittering on the edge of your seat in stitches the whole night through. Fasten your seatbelts and stow your tray in its upright position; it’s about to be a terrifically turbulent flight!

Be swept away in the enchanting aesthetic that Set and Lighting Designer Kevin Kearney has created for this hysterical farce. All the charms of a posh Paris flat await audiences when they enter Highwood Theatre’s new playing space— easily double the size of their former, downstairs stage— and its simply charming. Kearney allows Director Sarah Scott to put a breathtaking spin on the production by setting it out on the lavish terrace of Bernard’s Parisian flat. The stonewashed exterior look, complete with window-ledge garden boxes and outdoor lamppost-style lanterns, create an air of authenticity to the production’s exotic location. What’s more is Kearney’s attention to interior detail. All good farces involve doors, Boeing Boeing being no exception, but Kearney has crafted fully painted interiors for each of the rooms hidden away behind the quartet of doors on the terrace. This carefully crafted illusion is not only aesthetically pleasing and showcases Kearney’s dedication to realism, but allows the audience to buy into the notion that the flat itself extends beyond our visual sightlines. The furnishings are otherwise simple, Property Designer Jason Reid throwing little detailed nuances here and there to further authenticate the world in which the characters’ play. Each of the air stewardesses bags are particularly impressive and are matched perfectly to their uniforms.

The airline hostess uniforms are cut so handsome they’re dazzling! Costume Designer Tip Letsche fits each of the femme fatales in bold colors that reflect their radiant personalities as well as their airline of service. A robust red for Big Apple City Doll Gloria, a pizzazz-pumped yellow for the passionate Gabriella, and a bold and boisterous blue for larger than life Gretchen, each of their costumes fitted to perfection in the style of the mid 1960’s with little black pillbox style caps to offset the vivacious color scheme. Letsche keeps the men looking sharp, with Robert’s costume having a bit more charm than Bernard’s, which is a curious but not unwelcomed choice. Letsche even manages to keep Berthe looking appropriately frumpy with a simple black affair to ground the character’s status as the household maid in her couture.

With such lovely little sound effects like planes taking off and vacuum cleaners running off stage, it’s a little disappointing that Sound Designer Matthew Nicola doesn’t utilize a hint of music or snippet of song between the scenic transitions to smooth them out into something fluid. Though the changes happen quickly as there’s no real scenery to shift or move, they feel heavy in semi-darkness with nothing but the sound of actors shuffling about on the stage. This aside, Nicola does a fine job of articulating nifty little moments to create atmospheric ambience with sound effect work.

Director Sarah Scott understands the subtle inner mechanics of farce, particularly when it comes to the timing of entrances and exits. Her experienced guidance when it comes to this precision timing is well displayed in the second act with so many people coming and going through the doors that it’s dizzying to watch. Because Scott has a firm handle on how to execute these moments, the comedy of the show builds naturally, the hysterics of the farce layering onto one another in a climactic build that is ultimately hilarious and thoroughly enjoyable for all watching. Leaving the actors to their natural devices when it comes to assuming accents, Scott’s casting choices were strong and allowed for the necessary differences of origin to reflect onto the characters accordingly.

Bernard (David Johnson) is at the center of chaos. With three fiancés spinning over his head every time a plane takes off it’s no wonder things get out of hand in a hurry when the time tables go off kilter. Soppy and affectionate with each of the women (never at the same time, of course) Johnson portrays Bernard as a gooey and heartfelt simpleton, but don’t be so readily fooled by this saccharine veneer as it peels right off to reveal the less than charming playboy bachelor interior quite easily. Though his energy is quite static for the situation, his eyes do rise to the occasion from time to time when the calamity gets thoroughly underway in the second act.

Berthe (Sheila Blanc) is a grounding force to be reckoned with when it comes to attitude. Blanc’s overall approach to the character is quite impressive, giving her a heavy deadpan, biting sarcasm, and series of tangy quips that really give Berthe the salted weight of an underappreciated domestic employee. Scathing remarks and hysterically timed glares in Robert’s general direction, on top of her pinched French accent create a great many laughs for the audience all throughout the performance. But with all the switches, changes, and shenanigans— which Blanc handles quite soundly— it really is no life for a maid!

The trio of femme fatales— the tripod of scintillating support as it were— is almost too glorious for words, defying description as each lady is more lovely and more intense than the one before her. There’s Gloria (Ashley Zielinski), who’s just sweet as apple pie and twice as annoying, Gabriella (Nina Marti) who’s so fiery she can burn down the whole of Paris with a single glance, and of course Gretchen (Moriah Whiteman) whose intensity shakes the stage, quite literally! Though the three do not have direct interactions— or so they shouldn’t if Bernard can keep his time tables straight— their staunch character development and interplay with Bernard, Robert, and Berthe, make for comedic golden moments sprinkled liberally throughout the production.

Zielinski, who adapts a classic New York City doll sound appropriate for the play’s placement in the mid 60’s, is the epitome of an obnoxiously adorable and adorably obnoxious American girl. Representing TWA, Zielinski channels all of her mannerisms into her sweet temperament, letting her little outbursts of temper be complete surprises, which adds a layer of humor all its own to her character portrayal. Some of her funniest interactions occur between her and the character of Robert in the second act when they start practicing certain practices in a purely technical manner. Flirtatious and funny, Zielinski is the all-America girl-next-door right up until she gets upset and then kapow! — she’s a good blast of the ol’ red, white, and blue attitude and it’s hilarious.

Marti, who is as ferocious as her yellow costume is loud, takes the character of Gabriella by the horns and turns her into a passionate bull, stomping about in an elegant fashion with a conflagration that is most certainly cause for alarm. With a hot-blooded temperament, and a sparkling Italian accent, Marti molds her character of Gabriella into a sumptuous and sultry treat that simply cannot be resisted. A tigress when she goes on the attack, her verbal claws are sharp and she can eviscerate with a clipped delivery of a phrase or a simple glare from her vividly expressive face.

Whiteman, who makes Gretchen simply larger than life, is sturdy in her character development yet finds the delicate balance between stalwart German stereotype and love-struck ingénue; the result is cataclysmically comedic. With German patriotism influencing her character’s energy, and a robust yet articulate approach to the accent, Whiteman makes Gretchen a driving force in the back end of the performance, particularly when it comes to the exchanges she shares with Robert. Between her fist-slamming, her bellowed pronouncements of emotion, and her overall aggressive approach to the character’s finer moments, Whiteman makes her mark on the show and its sensational.

Stealing the show with his physical shenanigans, Louis Lavoie takes up the role of Robert and makes him the most dynamic and invested character portrayal in the performance. Giving each of the gals a run for their money, Lavoie goes toe to toe with the trio of femme fatales and feeds off of their naturally entertaining energy as much as he gives them frenetic enthusiasm to play with. Owning the physical humor of the show in an honest and truly hysterical fashion, moments like trying to hide the various airline bags— which become a sort of red-light green-light game for Lavoie— becomes gut-busting hilarity for the audience to watch. Lavoie has a keen understanding of how to work his physicality into the veins of every moment, fully expressing the comedy of the situation in earnest by using his arms, legs, torso, and wildly animated facial features to articulate moments of humor. With a convivial and congenial nature to his stage presence, Lavoie carries the plot forward, assisted by the lovely leading ladies of the production, and ultimately makes for one wild and bumpy ride all throughout the evening.

Be sure to procure your boarding pass, The Highwood Theatre won’t be able to keep Boeing Boeing grounded for long and it sure would be a shame if you miss out on this delightful opportunity to catch a witty and wild farce that’s really aces!

Boeing Boeing plays through February 5, 2017 as a Your Theatre Professional Production at The Highwood Theatre— 914 Silver Spring Avenue located in the heart of Downtown Silver Spring, MD. For tickets call the box office at (301) 587-0697 or purchase them online.