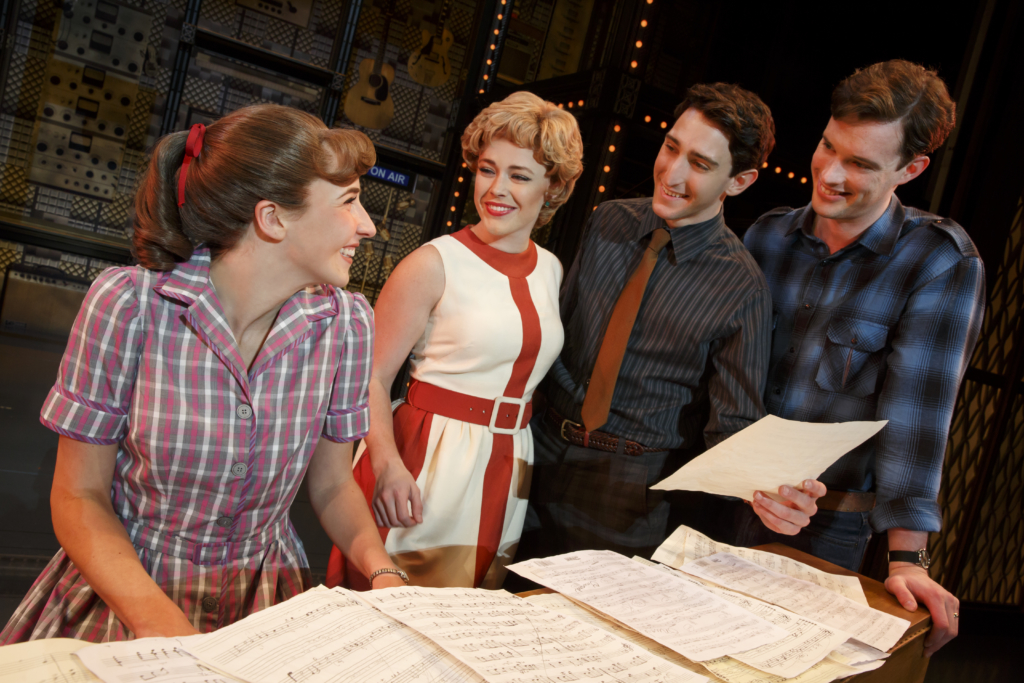 You gotta get up every morning with a smile on your face and show the world all the love in your heart. Because sometimes life goes the way you want it to and sometimes it doesn’t. But sometimes when it doesn’t, you find something beautiful. And Baltimore is finding that something beautiful right now in a world that’s turned upside down and doesn’t make a whole lot of sense. Live theatre art is doing what it was always meant to do, helping people make sense and understand the world around them, and that is exactly what is happening at The Hippodrome Theatre this January as Beautiful: The Carole King Musical lands at The France-Merrick Performing Arts Center. As a part of the CareFirst Hippodrome Broadway Series, with Book by Douglas McGrath, and Words & Music by Gerry Goffin & Carole King and Cynthia Weil & Barry Mann, Beautiful makes its mark on Charm City and reminds us all that there is light at the end of the tunnel, even when the situation looks bleak.

It’s the music that we all know, it’s the music that we all love. Some of us grew up on it, some of us have only recently discovered it, but all of us love it. Creating a palpable nostalgia that fondly stamps audiences’ memories and takes them back to another place and time while still feeling perpetually relevant, the music of Carole King featured in Beautiful is striking. Even more so is the narrative of her life story, expressed exquisitely in Douglas McGrath’s book. Knowing a musician’s story is one thing, seeing it in live time flowing from creative inspiration into actual performance is a stirring and evocative experience. There is joy, there is pure emotion, and above all there is hope, fully present and thoroughly articulated all throughout the performance.

Scenic Designer Derek McLane crafts a masterpiece of simplicity with his fluid, rolling set features. In one swift glide, Don Kirshner’s recording studio becomes a performance stage for The Shirelles or The Drifters. In a series of serous shifts, scenery slides the play’s reality from one moment to the next, transforming before our very eyes the existence of music. A moment between Gerry and Carole or Barry and Cynthia happens in the studio and in just a blink of an eye, McLane’s carefully constructed scenery magically becomes a spectacle, a stage for those aforementioned groups of the times. This theatrical magic is enhanced by Lighting Designer Peter Kaczorowski, who demonstrates a keen understanding of illuminated transition. Party lights and inspirational glows to match the tones and tempos of these songs are what Kaczorowski puts forth and the effect is mesmerizing.

Grounding the play’s reality in its timeframe, Costume Designer Alejo Vietti, assisted by Wig & Hair Designer Charles G. LaPointe and Make-Up Designer Joe Dulude II, outfits the company in sartorial selections that are simply swell. The flashier costumes are reserved for the singing groups, even smart and snappy suits are seen on The Righteous Brothers (Matt Faucher and John Michael Dias, who own their ten seconds of fame with their wild yet strikingly true rendition of “You’ve Lost That Lovin’ Feeling” just before the Act I finale.) Vietti works closely with LaPointe to transition Carole King most noticeably, her hair and wardrobe selections changing not only as the years go by but as she comes into her own unique individual person, freeing herself of being anyone— wife, mother, co-writer— other than Carole King. These choices reflect her character growth and overall progression of the show’s plot, a clever choice put forth by Vietti and LaPointe.

Not your stereotypical jukebox musical, because of the emotionally evocative story Douglas McGrath has threaded into the musical numbers, there is something worth cherishing in the overall experience, particularly in the dancing that arises from the more up-tempo numbers. Choreographer Josh Prince captures not only the essence of the era’s compositional style with his dance routines during numbers like “The Locomotion” and “On Broadway”— both being spectacular examples of how emotionally energetic Prince’s work is displayed— but also the emotional vibe of the moment. Celebratory and jovial in nature, Prince’s choreographic work is exceptionally sharp; the movements executed by the dancers are done so with exacting precision, making the style of the times radiate that much more intensely through them.

The Drifters (Josh A. Dawson, Jay McKenzie, Paris Nix, Noah J. Ricketts) and The Shirelles (Erin Clemons, Rosharra Francis, Traci Elaine Lee, Salisha Thomas) add a wild and wonderful sound to the Beautiful experience. These quartets create numbers like “On Broadway” and “Will You Love Me Tomorrow” with a flurry of feeling, delivering these moments with all of the energetic enthusiasm they deserve. Little Eva (Rosharra Francis) does her part too, putting a peppy pop of pizzazz into “The Locomotion” while Janelle Woods (Erin Clemons) puts a much headier and somber series of feelings into “One Fine Day.” All of the ensemble members add a deeply rooted emotional vocality to all of the music which they perform, whether as backup singers or featured soloists.

A sharp-speaking man of the business, Don Kirshner (Curt Bouril) is the only real character in the show whose performance is based solely around his spoken dialogue, though Bouril does lend his voice— in an intentionally poor and humorous fashion— to “You’ve Got a Friend” near the show’s end. Bouril is convivial, a whip-smart character man who gives Don Kirshner just the right edge for the music industry at the time without being obnoxious. Genie Klein (Suzanne Grodner), who is the cameo reference of Carole’s mother, is also a character defined by her straight scenes. Grodner, much like Bouril, is quick witted and carefully expressive when the heavier moments come into her character’s court. Playing for sincerity, both Grodner and Bouril get laughs and heartfelt moments out of Genie Klein and Don Kirshner respectively.

The office, the bedroom, they’re good in all the rooms, Cynthia Weil (Erika Olson) and Barry Mann (Ben Fankhauser.) Established early on as the comic relief, but in an earnest and convivial sense, Olson and Fankhauser’s characters are a delightful example of a functional side plot that exists to uplift the main focus of the story while feeling as if it has a true purpose. Fankhauser’s character work is hysterical, between his sarcasm and his deadpan delivery, he earns a fair few laughs throughout the evening. Olson, who is the polar opposite in her portrayal of Cynthia Weil, is a fancy-pants pushy and boldly ‘Broadway’ type gal who just won’t quit with the peppy personality. Their interactions, particularly as they try to navigate the confusing and choppy waters of their own personal relationship, are priceless, both honest and humorous.

Fankhauser and Olson have astonishing vocal abilities in addition to their authentically established character work. When Olson bursts onto the scene, quite literally, with “Happy Days Are Here Again”, her radiance outshines every light on the stage, shining through her bold and brass-warmed voice. Performing “He’s Sure the Boy I Love” with Fankhauser, Olson makes the duet dreamy. Their voices blend sublimely and with deep emotional conviction for “Walking in the Rain”, and their finale contribution to the quartet of “You’ve Got a Friend” brings a tear of bittersweet joy to the eye.

Now, I gotta prediction for these two, Gerry Goffin (at this performance Andrew Brewer) and Carole King (Julia Knitel.) They’re going all the way. Inseparable from the onset and intertwined in the most dynamically invested roller-coaster relationship-partnership, the character of Gerry Goffin and Carole King are delivered in a stunning manner by Brewer and Knitel, doing their real-life counterparts swift and brilliant justice. The chemistry is lively; the interactions realistic— everything from the gooey-eyed puppy-love meeting, to the profoundly bittersweet acceptance of their final moment together— the pair are perfect together. Brewer, as Goffin, has a rich vocal sound that is perfect for numbers like “Take Good Care of My Baby” and “Up on the Roof.” Brewer’s emotional outbursts, particularly as his character unravels are brutally honest and put a heavy heart to mind in the overall picture of the story.

Tremendously talented, Julia Knitel earns the titular right of the show, not only becoming Carole King but showing the audience something that is truly beautiful. Everything from her accent, which progresses from her young 16-year-old self right through to the modern time of where she ends, to the way she comports her physicality reads to the utmost a true representation of Carole King. The journey that Knitel takes the audience on is mesmerizing. Drawing theatergoers into Carole King’s life, her music, and her story, Knitel is a virtuous narrator of one of the most under-recognized musical experiences in America. Her voice is sublime, there’s no denying it, and number after number like “It Might as Well Rain Until September” and “Will You Love Me Tomorrow” prove that time and again. Progressing physically, emotionally, and vocally as time passes, Knitel showcases the journey and the dynamic development of Carole King from start to finish. “It’s Too Late” is delivered with such hope and promise and reinvention that it shocks the audience to thunderous applause. Remarkable in every facet of her performance, Julia Knitel as Carole King, simply put, is beautiful.

There’s so much I wanna say but the right words don’t come my way, so instead I’ll let the music, the story, and the whole show speak for itself. More than deserving of its name, more than earning that titular adjective, the experience is simply as Carole put it: Beautiful.

Beautiful: The Carol King Musical plays through January 29, 2017 at the France-Merrick Performing Arts Center— 12 N. Eutaw Street in the Bromo Seltzer Arts District of Baltimore, MD. For tickets call the box office at (410) 752-7444 or purchase them purchase tickets online.

A Smile On Your Face, Love in Your Heart: An Interview with Ben Fankhauser of Beautiful: The Carole King Musical

The Bodyguard at The Hippodrome
Close