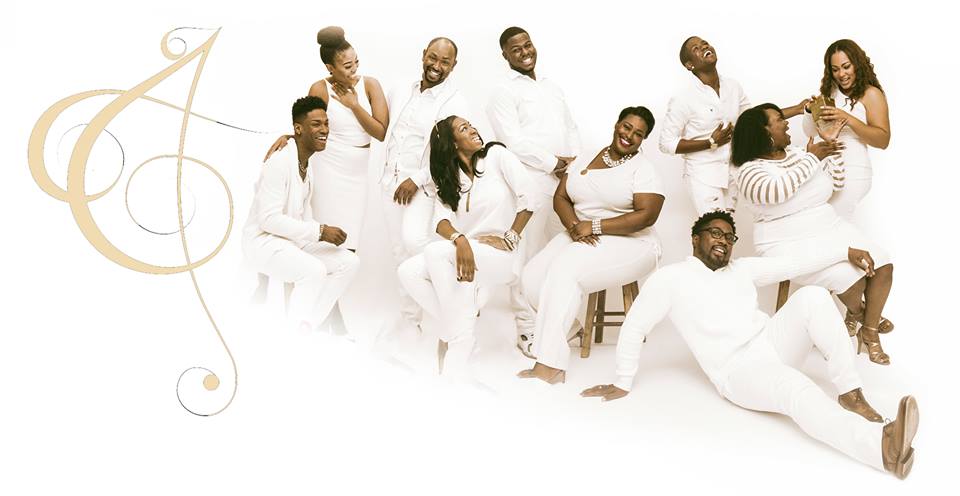 The fireside is blazing bright, and they’re caroling through the night! This Christmas will be a very special Christmas— just so long as you head over to ArtsCentric, now residing at The Motor House in Baltimore’s Station North Arts District, and celebrate the holiday season with their production of Sincerely, Holidays. The third in the Sincerely series, Conceived and Directed by Kevin S. McAllister, this beautiful musical revue celebrates African-American holiday musical traditions and is so full of joy that you’ll be bursting at the seams with the holiday spirit before the evening is over. With Musical Direction by Cedric D. Lyles, this joyous event is cause for celebration; you’ll leave with your heart filled by the true spirit of Christmas.

With a simple set by Lee Lewis to put folks in the holiday mood— a tree, some presents, a giant teddy bear— the orchestra, led by Musical Director and Arranger Cedric D. Lyles, gets set right across the back of the play space so that everyone in attendance can really see and feel the passion and intensity with which the four-piece band (Jordan Chase on guitar, Kevin Ellis on percussion, Michael Kellam on bass, and Lyles at the keys) puts forth when they play. Lighting Designer Lynn Joslin runs away with the wild illuminating tools needed to really pump up the experience when it comes to lighting this show. Using all sorts of special colors and blends, Joslin finds the right feeling for each of the chapters of the show on either side of the intermission and gets that underlying aesthetic firmly cemented in place to properly compliment the performances as they happen.

Director Kevin McAllister, who also outfits the cast in fabulously fashionable threads of the season, divides the show up into six chapters, three on either side of the intermission. The logical progression of this show structure keeps the audience engaged in the total experience. There’s a good old fashioned holiday sing-off and show-down between the ladies and the gents in the opening section of the show, as well as tribute to variety show hosts that features Nat King Cole and various guest stars. Like all of the performances in the Sincerely series, McAllister includes a bit of audience interaction and improvisation to showcase the versatility of his performers. This section also includes some crooning and singing outside of the holiday scope, which is a nice way to further display the range of styles the performers can achieve.

The back side of the show includes a gospel section, which McAllister uses to open up the second act. Feeling much like a true holiday service in a very spirited church, Christmas hymns flood the stage and the inspiring heartfelt sentiment behind these songs carries in waves to the audience. McAllister includes a deeply sentimental message of peace and love in the middle of the second act as well, reminding everyone about the true spirit of Christmas. Closing out the show with a lively upbeat finish, it becomes an all-inclusive sing-a-long with just the right vibe to get the house bouncing and singing along, making for the perfect conclusion to the much-needed joyful noise of the evening. McAllister presents not only music but the history of the music with carefully crafted narrative speeches to introduce each of the segments as they roll along, delivering heartfelt tributes to the artists with projections of their likeness on the screen as well.

Musical Director Cedric D. Lyles, who keeps the keys rocking from the moment starts right through to the engaging and energetic finale, is a masterful leader when it comes to the energy, tonality, and overall functionality of the show’s music. Whether guiding the girls or the guys through their blended harmonies, pairing them off against one another in the musical show-down that kick-starts the show, or focusing more intently on duet harmonies like during the “Some Day at Christmas” segment of the show, Lyles gets the perfect sound echoing out of these nine performers. Adding his own delectable voice to the mix for various songs in the opening segment— like “That’s What Christmas Means to Me” where he wails away— Lyles gives a well-rounded performance as both singer and player from his spot back-center stage in the pit.

Nine other performers lend their exceptionally talented voices to the performance, blending and mixing together for group sounds throughout that are filled with the joys, elations, and spirits of the holidays. Kymon George Carriker, Bryan Jeffrey Daniels, David Hammett, and Marquis James make up the gentleman’s section of the performance duos in the opening section of the show while the quintet of ladies, featuring Kelli Blackwell, Denae’ Fielder, Raquel Jennings, Shayla Lowe, and Pam Ward, hold their own against these jovial gents in the sassy and ferocious sing-out showdown. All nine of the performers are not only talented of voice but fleet of foot and exceptionally well-motivated to move to Choreographer Shalyce Hemby’s enriching dance routines. Featuring a world of two-stepping style that does a great many eras of musical styling justice, Hemby finds a great deal of choreographic movement that is custom tailored not only to the musical numbers featured in the show but also to the talented skills that each of the performers brings to the stage. A special shout-out is well deserved by Miss Jaya Cuffie, who appears just before the Whitney Houston tribute and dances a beautiful ballet while Raquel Jennings sings “Who Would Imagine a King?”

Jennings, who possesses powerhouse vocals like the other eight members of the company, really sparkles when she takes the lead during “Santa Bring Me a Man for Christmas.” Falling on the floor in soul-searing desperation, Jennings brings an inferno of fire that fuels her vocal expression for this number, driving home that need and sparking up a fire that would roast everybody’s holiday chestnuts! Singing and bouncing in the background for the introduction of Nat King Cole and his variety show, Jennings blends her vocals divinely in moments when others are meant to be the leader of the scene. Pushing with enthusiasm in all of the group numbers that the girls carry in the beginning, Jennings is a radiant streamer of vocal tinsel, a shiny and illuminating addition to the Sincerely, Holidays tree.

Pam Ward, who features as a wonderful fourth in the quartet— “Who Took the Mary out of Christmas?”—  with Kelli Blackwell, Cedric D. Lyles, and Denae’ Fielder, is a fierce vocal talent to have in the mix of the holiday production. Riffing and wailing away in duet with Shayla Lowe for their solo features during one of the gospel hymns, Ward showcases her vocal prowess with ease. Lowe, who gives the narrative introduction to the variety show segment, does her finest character work when appearing on the Nat King Cole show as Pearl Bailey. Complete with the intoxicated personality and physicality to match, Lowe pays fine homage to the larger than life personality with her song and stumble routine in this moment. But her crowning moment of vocal glory is the duet that she shares with Kymon George Carriker. Bringing the house to tears— even choking up their fellow performers on stage— Carriker and Lowe sing a blended rendition of “Someday at Christmas/My Grown Up Christmas List”, which calls to the forefront of everyone’s mind all of the strife we face in the world and how peace and love is what we really need.

Carriker, who is an adorably cherubic addition to the cast, showcases a great deal of character work in both the improv section of the show—near the end of the first act— as well as at the top of the second act when the gospel portion of the program gets underway. Getting to put his vocal talents on display in the non-holiday section of the show, where he takes turns with other performers crooning and serenading various audience members on stage— Carriker proves beyond a shadow of a doubt that he’s got the vocal chops to run with the big kids when it comes to this holiday revue. David Hammett, who catches the eye frequently throughout the program but especially with his dancing during the “Little Drummer Boy” call and response portion of the first chapter, is another crooner who takes his moment in the spotlight outside of the holiday numbers. Much like Carriker, Hammett really puts his skills on display when it comes to putting the moves on the audience members, both during the interactive portion and the dance party near the show’s end. 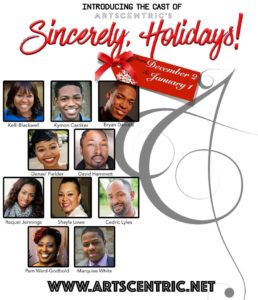 Denae’ Fielder is a sassy vixen whose rendition of Eartha Kitt is purrrfect! Sidling into the role during the variety show segment, her version of “Santa Baby” does the legendary singer a great deal of justice. Performing with even greater justice in her tribute to Whitney Houston, Fielder’s voice shines during “I Miss You Most at Christmastime.” A delight as both a soloist and ensemble singer, Fielder fits perfectly into the quintet of girls featured in the show. As does the boisterous and vocally proud Kelli Blackwell. With a soulful voice belting to the heavens— particularly during the finale of “Joy to the World” where she sings along and invites the audience to sing into her microphone with her (an ultimate and thrilling experience if you’re fortunate enough to have it!)— Blackwell is a singing sensation all throughout the show. But it’s her wild and wicked rendition of the worm as ‘grandma Kelli’ in the improv section that is most memorable. Or her shenanigans with her flute and then later with her angel wings; Blackwell has such a blast of a good time that her jubilant spirit is simply contagious!

Marquis James and Bryan Jeffrey Daniels are in mini competition all their own for show-stealer when it comes to the performances they are laying down. James and Daniels are both exceptionally gifted of voice and with emotional expression when it comes to singing. Their character work in this production is what has them really standing out. James rocks onto the scene during the variety act as Louis Armstrong, delivering a sensational rendition of “’Zat You, Santa Claus?” and really gets that smooth verve going in that number with his highly stylized delivery. Second only to his Prince tribute near the end of the performance— where Daniels gives a stunning rendition of “Purple Rain”— his homages are aces all throughout the show. But Daniels squeaks ahead by just a hair when it comes to show-stopping, scene-stealing moments. With Nat King Cole being the mildest of his over-the-top performances, Daniels is well recognized for his vocal ability in this character as well as his wailing falsetto as Michael Jackson in the Jackson 5 cover of “I Saw Mommy Kissin’ Santa Claus.” Daniels’ wild attitude informs a great many of his numbers and characterizations, keeping the show full of holiday hilarity.

It’s the feel-good show of the season. There is love, joy, happiness, and heartwarming sentiment that just cannot be beat. It’s what the world needs, especially this time of year, and you’ll leave feeling relieved and full of the grace of the holidays! It’s a show that must be seen, it’s the show that the holidays are begging for. Don’t miss Sincerely, Holidays this Christmas at ArtsCentric, you’ll find yourself more in the true spirit of Christmas if you do.

Sincerely, Holidays plays through January 1, 2017 at ArtsCentric on the main stage of The Motor House— 120 W. North Avenue in the Station North Arts District of Baltimore, MD. Tickets are available for purchase at the door or in advance online.

Review: The Color Purple at ArtsCentric