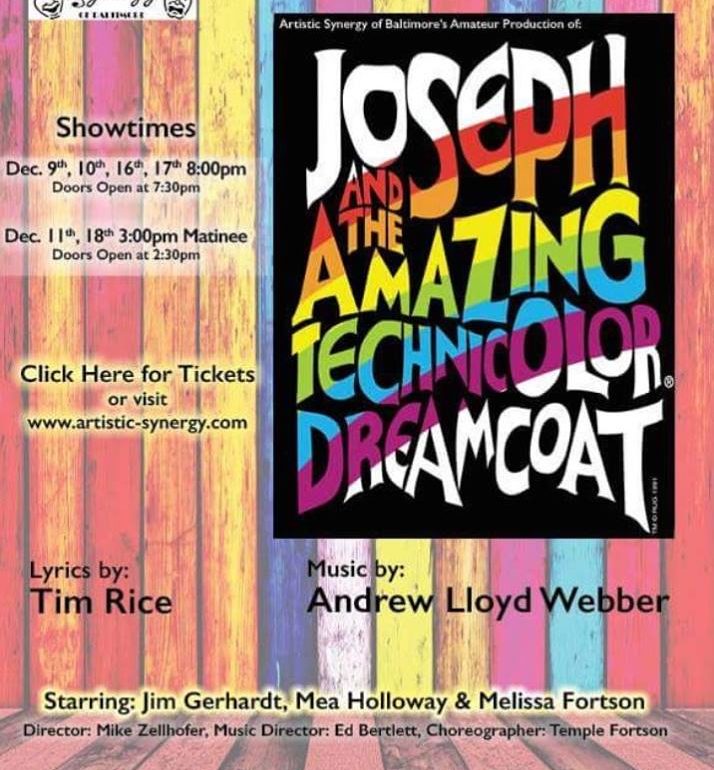 I dreamed that in the fields one day the corn gave me a sign. It was followed by seven fat cows crossing the Nile and painted on their flanks were more signs that said “go, go, go— to see— Joseph and the Amazing Technicolor Dreamcoat— at Artistic Synergy! Andrew Lloyd Webber’s technicolor wonder is playing just six performances this holiday season and there are some truly bright shining stars in the production that you simply won’t want to miss! Directed by Mike Zellhofer, with Musical Direction by Edward Berlett and a live pit conducted by Andrew Zile, this Webber wonder has all sorts of sneaky surprises for the downhome Bawlmer hon if you look closely! 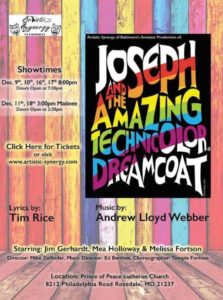 It’s difficult to decide which is more aesthetically impressive: Jim Shomo’s Lighting Design, which blinks every color imaginable all throughout the production but especially during “Joseph’s Coat”, or the dazzling coat of many colors itself, designed by Sally Kahn. Both capture stunning shades of the rainbow, all the more so where Shomo is concerned because his lights move. But Kahn also deserves a nod for her creative threadwork as the coat has its golden lining; this is a song lyric descriptor that is all too often overlooked. Both Kahn and Shomo accurately represent the rainbow of colors in this production.

Further baring the torch of many colors, Costume Director Lorelei Kahn puts forth a multi-rainbow vision when it comes to outfitting the brothers and the wives of the show. Each brother is kept casual, in clean jeans and a sharp, long-sleeved button down dress shirt. Each brother also has their own color scheme. A similar approach is used for the many wives of Jacob and their flashy skirts. But the best costume nod of all is probably one of the many Easter Eggs that Director Mike Zellhofer has included in the production; when Jacob (Wayne Ivusich) arrives during “Jacob and Sons” and they announce how his sons and his wives used to call him “DAD”, Ivusich rips open his biblical style robes a la Superman and reveals an Ed Reed #20 Ravens jersey. This, along with several other nods throughout the production brings a sense of downhome Bawlmer community theatre to the production.

Though Choreographer Temple Fortson can’t show colors in her dance routines per se, she’s certainly working the technicolor angle when it comes to variety. With a microscopic stage by comparison to the large cast size, Fortson works musical theatre magic to get bodies in motion for various numbers throughout the production. There is one number that stands up head and shoulders above the rest, the “Joseph Megamix”, which incorporates the entire cast in non-stop disco-pumped action-blast dancing, and those 15 minutes alone make Fortson’s work well worth her efforts.

There appears to be an epic game of cat and mouse happening with the show’s musicality. Pit Conductor Andrew Zile spends the better portion of the show displaying his agile and adept ability to move his musicians to catch-up with or fall back in line with the company as the tempos seem to vary greatly, sometimes even within the same number. These tempo fluctuation hiccups aside, Zile does a good job of keeping the pit balanced so as to not overplay the performers as they sing. Unfortunately, a few microphone glitches sprinkled liberally throughout the production take their toll on being able to hear the performers. But what they lack in technical fluidity, both the cast and orchestra make up for in energetic enthusiasm and this helps make up for those little moments where microphones drop lines and tempos scramble a familiar tune.

Director Mike Zellhofer includes too many little nods to list at present, that’s part of the fun of the show— seeing if you can catch all of the little things that sets this production apart from others like it. His overall framework for the show— setting it inside a classroom with students— is not unfamiliar but works particularly well for this production and creates a sturdy vehicle for including the children’s choir. Featuring Iris Hamilton, Margaret Hamilton, Kai Hines, Amaya Hollis, Jessica Pallanck, Andrea Rudai, Samantha Rudai, Faith Standish-Pallanck, Hope Standish-Pallanck, and Grace Volpe, the children’s chorus is a delightful addition to numbers like “Close Every Door.” It’s also their hilarious interactions with the Narrator character, who starts off life as their teacher, which really makes them an engaging part of the production. Watch them during Mrs. Potiphar (Ana Johns) saucy dance routine and you’ll see exactly what I mean.

Margaret Hamilton, Andrea Rudai, Hope Standish-Pallanck, and Grace Volpe double up as the Ishmaelites and the Pharaoh fan-girls, where they gush and scream over pelvis-popping Elvis, Jim Fitzpatrick, playing Pharaoh. Fitzpatrick is a regular Elvis impersonator type with all the right moves and the striking vocals to match for his big hunka-hunka-burning love solo, “Song of the King.” Aided by his Butler (Lisa Rigsby, who performs with Amy Rudai in the early verses of “Go, Go, Go, Joseph”) in fetching that Joseph man, Fitzpatrick gives a great Elvis kick of panache to the part.

Creating a strong and robust sound, Joseph’s eleven brothers— Reuben (Nick Ruth), Simeon (Ed Higgins), Levi (Jim Fitzpatrick), Naphtali (Patrick Rudai), Issachar (Tony Ringer Sr.), Asher (Bill Bisbee), Dan (Matt Berlett), Zebulon (Joe Weinhoffer), Gad (Rhashaad Lee), Benjamin (Gregory Areford), and Judah (Michael DeNicolis)— deliver a solid sound and well-blended harmonies for numbers like “One More Angel in Heaven”, “Grovel, Grovel”, and “Those Canaan Days.” Ruth, as Reuben, leads the cowboy number, “One More Angel in Heaven” and puts a real comedic spirit behind the melodramatic overtones of it. Bisbee, as Asher in a beret and wig, leads a rollicking and hearty rendition of “Those Canaan Days”, which includes a hilarious extended sustain by Brother Simeon (Higgins) at the song’s conclusion. But taking the cheeky cake among the brothers is Joe Weinhoffer as Zebulon, jammin’ through “Benjamin Calypso.” With his nifty smirk and pop-tuned vocals, Weinhoffer preaches young Benjamin’s innocence and really gets the brothers going for the steel-drum driven conga line.

Powerhouse vocalist Mea Holloway takes on the role of the Narrator. Sharing the role (on alternating nights with Melissa Broy Fortson), Holloway showcases her belting abilities as well as her tenacious vocal prowess. Shouldering the narrative burden of the show through numbers like “Jacob and Sons”, “Joseph’s Coat” and “The Brothers Come to Egypt”, Holloway continually demonstrates her lyrical loveliness and does quite a number on Webber’s orchestrations. Her shining moment occurs as she introduces the audience to Act II with “Pharaoh’s Story”, putting her full upper range on display in addition to her beltress abilities. Watch the interactions between her character and the children as well as her character and Joseph (Jim Gerhardt.) Many of Zellhofer’s directorial nods of humor and cleverness are tucked away in these moments.

Jim Gerhardt, as Joseph, is everything an actor delivering the role should be. In addition to having wildly vivid facial reactions and responses to things happening around him, Gerhardt is a mindfully present performer, absorbing each moment as if it were newly experienced. His voice is astonishing and despite being of a higher tenor range, works exceptionally well with the transpositions Musical Director Edward Berlett has made to the score. Gerhardt takes every opportunity in the score to truly showcase his vocal range, in addition to his vocal tenacity, all while imbuing each moment with a strong emotional connection. This is felt most keenly in “Close Every Door”, particularly with the echoed cry at the end. Gerhardt even finds a hilarious nuance to the character during the “Joseph Megamix” by serving as a DJ spinning records during the number. Gerhardt is a singing sensation and truly brings home the beauty and wonder of Webber’s score in Joseph.

So go, go, go see Joseph! And all the rest of the cast too! It’s a wonderful community effort as the company heads into its fifth anniversary.

Joseph and the Amazing Technicolor Dreamcoat plays through December 18, 2016 at Artistic Synergy in the basement of the Prince of Peace Lutheran Church— 8212 Philadelphia Road in Rosedale, MD. Tickets can be purchased by calling the box office at (410) 833-5181 or by purchasing them online.