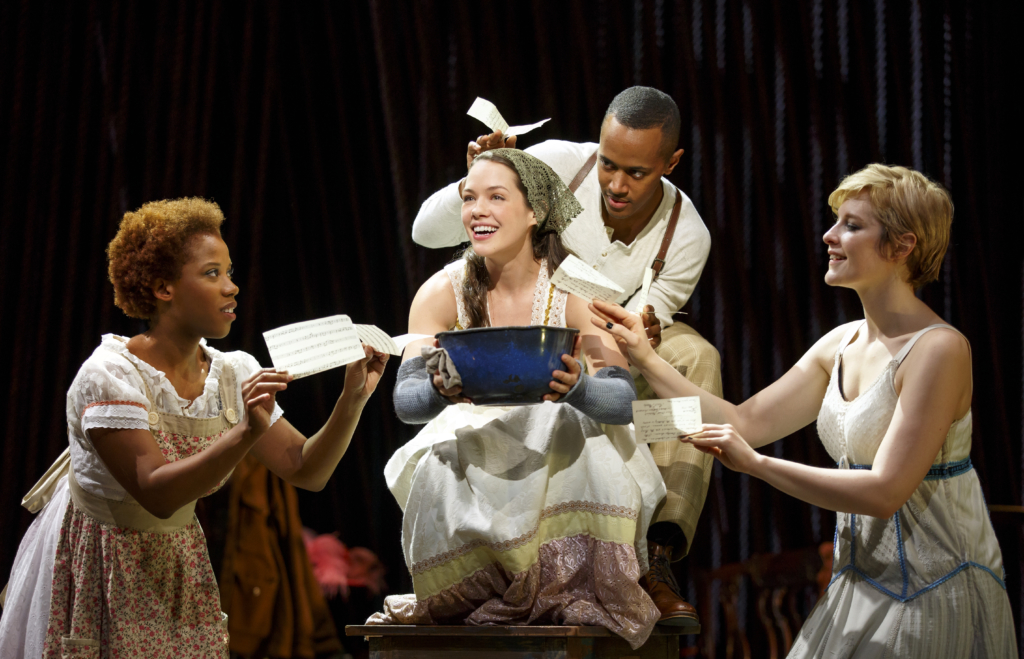 Oh, if life were made of moments— even now and then a bad one! But if life were only moments? Then you’d never know you’d had one! And have one you shall, providing you take a moment to see The Fiasco Theatre production of Stephen Sondheim’s Into the Woods appears for but a moment— until January 8, 2017— on the Eisenhower Theatre stage of the John F. Kennedy Center for Performing Arts. Re-envisioned, reimagined, and revised this brilliant new twist on Sondheim’s fairytale classic is a revolutionarily symbolic approach to exploring the notions of these stories at their core in addition to focusing on the musical genius that Sondheim has constructed in the complex harmonies of the show’s score. Directed by Noah Brody and Ben Steinfeld, with Musical Direction by Evan Rees, this stunning retooling and retelling of Into the Woods will mesmerize the mind, arride the aural palette, and scintillate the musical spirit of the soul within each theatergoer undertaking their own unique journey into the woods.

The visionary approach to the musical is quite striking. The notion that just ten performers— technically eleven with the inclusion of the on-stage pianist Evan Rees— could play all dozen and a half characters in this skeletal framework is astonishing. The fluidity with which the shifting of characters is achieved is just as remarkable as the concept itself. All players become the narrator; all players exist within their own story as well as the biggest story that unfolds around them. Some of the performers, in addition to Rees’ live piano-playing, take up instruments in plain view to accompany the otherwise acoustic performance; this includes Fred Rose with various string instruments, Anthony Chatmon II with the spoons, and Bonne Kramer on bassoon. It’s a deconstructed assembly with a few critical omissions that really pull the audience into the story; the lines of wisdoms that are generally dropped from various character during the “Midnight” sequences being the most notably absent feature, though surprisingly and pleasingly noteworthy is the fact that their absence seems to strengthen the production.

Unfolding conceptually inside of Sondheim’s piano, the show’s minimalist approach exists inside the literal confines of a piano, as deconstructed in a vivacious yet whimsically ominous fashion by Scenic Designer Derek McLane. Flanking either side of the stage with disembodied piano frames and framing the proscenium with ivories of Steinway’s long out of use, McLane creates the illusion that the play’s action is occurring within a piano itself. This is a brilliant symbolic actualization that the narrative springs forth from Sondheim’s musical genius. McLane drapes thick rope cords across the back wall of the stage, which could be interpreted as the cords inside the piano innards, but serve brilliantly as the woods themselves thanks to the incendiary creations of Lighting Designer Christopher Akerlind.

Presenting Sondheim in a whole new light, which is par for the course with this production, Akerlind uses shadows— both puppeted silhouettes and more naturally occurring ones— to enhance the aesthetic of the performance. Keeping in the vein of the show’s overall simplicity, Akerlind uses very little by way of color, subtle blues for “The Last Midnight” being one of the only moments where such hues come to mind. It’s Akerlind’s use of precision blackouts and sharply timed focus lighting that emotionally punctuates certain moments to their fullest potential. Coming to mind is the crushing moment featuring Rapunzel’s fate in the second act; this is a scene usually experienced off-stage but with a simple burst of light, Akerlind transforms the moment into a harrowing one that sticks in the mind. Following the suit of simplicity, Costume Designer Whitney Locher uses plain clothes that are at their most basic little more than coverings of the body. An apron to identify the baker and his wife, Red’s iconic cloak, and a disheveled but whimsical shawl for the witch, these accessories serve as extensions to the natural character portrayals put forth by the actors in this production.

The movement of the piece is smooth, simply put. Choreographer Lisa Shriver and Directors Noah Brody and Ben Steinfeld work in tandem with one another to create a perpetual churning among the players as well as the narrative, weaving these threads in and out of one another creating a marvelous tapestry of Sondheim’s work. The retooling of the show’s movement is just one of the many nuances that have been adjusted to attract the attention of show favorites and newcomers alike. Shriver’s vision of the way Into the Woods moves up on its feet— including the piano wheeling about on the stage and various characters riding it— is mesmerizing in a way that only a musical of this caliber could be when reimagined.

With a gloriously strengthened ensemble, numbers which feature the entire company, like “Ever After” and “Into the Woods” are delivered with a hearty rush of gusto. These ten performers, as well as Evan Rees, take turns being the narrative voice in the show; they each take their moment telling portions of the story. This creates an inherent ensemble feel to the production which fortifies the ties that bind their characters even more than the way in which they were originally written. Songs like “No One is Alone” become that much more profound in their delivery because of the way these bonds are expressed among the ensemble.

Evan Rees leads the ensemble of performers through the entirety of the show, lending his voice to a line here and a line there. Rees is even incorporated more fully into the plot when they toss a sheet over him and pass him off for the replacement Milky White near the penultimate moment of Act I. Much like Rees, Fred Rose is primarily bound to his instruments for the duration of the performance, though he does pop to action as the dapperly polished hobo-esque Mysterious Man. While Rose’s character work is well suited for the performance, it’s his instrumental work that is truly noteworthy, particularly his cello accompaniment alongside Cinderella for “Steps of the Palace.”

Leaping and bounding with gargantuan bouts of energy, Phillippe Arroyo tackles the role of Jack with an enthusiastic punch. Doubling as the Steward and very clearly drawing a distinctive line between these characters, Arroyo has a plucky mannerism about him as the young boy who may be touched. With a sweet voice to bid Milky White goodbye, Arroyo gives the character an innocent flavor of naiveté, which is quickly dismissed for his robust rendition of “Giants in the Sky.” Contributing to the quartet of “Your Fault” and really engaging a cheeky element in this moment, Arroyo showcases his versatility as a performer with great consistency throughout the show.

There could be nothing funnier than a man playing Milky White, except for when that man— Darick Pead— doubles as wicked step-sister Florinda and Rapunzel’s Prince. Though it’s Pead’s utter comic shenanigans which earn him roaring applause from the audience during his moments as the despondent cow— particularly the hipster-vibe he infuses into his ‘moo’— it’s his voice when singing as Rapunzel’s Prince that is truly worth praising. Everything he does is worth praising, but the vocal panache and swarthy charm with which he imbue his halves of “Agony” and “Agony (Reprise)” are hypnotic to say the least.

Playing opposite Pead, as Cinderella’s Prince, The Wolf, and Lucinda, Anthony Chatmon II is equally charming, if not deceptively so when it comes to his Prince character and his halves of the aforementioned “Agony” numbers. Chatmon must be commended for his quick-switch abilities when it comes to playing Cinderella’s Prince and Lucinda in the same scene with himself; the result is hysterical. But Chatmon truly shines as The Wolf. Saucy, swanky, and sinfully seductive for “Hello, Little Girl,” there is a sensual richness that seeps out of his voice and into the song. Coupled with the taxidermy wolf-head he puppets in this number, Chatmon becomes a delectable force to be reckoned with upon the stage.

Taking the more matronly roles of Jack’s Mother and Cinderella’s Step Mother, Bonne Kramer fills out each of these ladies with a tenacious personality. Particularly when it comes to Jack’s Mother, Kramer is lively and quite vocal in her spoken lines. This is also true of the sprightly Lisa Helmi Johanson, playing both Rapunzel and Little Red Ridinghood.  Johanson, who has a dulcet songbird voice as Rapunzel and a surprisingly gruffer sound as Little Red, is quite the versatile performer, switching easily between the spry Red and the sheltered Rapunzel. Her duet as Rapunzel, “Stay With Me” is touching and tender, while “I Know Things Now” shows Johanson’s edgier vocal abilities.

Though she doubles as Granny— who is experienced for just the briefest of moments— Laurie Veldheer is one of the few performers in the show who focuses mainly on a singular character. Her portrayal of Cinderella is magically delightful. Doleful in moments of uncertainty and tragedy, but optimistically winsome in others, Veldheer brings a delicate emotional balance to her portrayal of the would-be princess. “On the Steps of the Palace” becomes an aural treat for audiences as Veldheer alights her voice to the number, ringing with crystalline resonance through each of the sustains therein. Lending her voice to the quartet of “Your Fault” and later “No One is Alone”, Veldheer is a remarkable talent that serves as fairytale glue in many moments throughout the performance.

There was a Baker (Evan Harrington) and his Wife (Eleasha Gamble) and they were beautiful; they were proper artists with their— that might be a different Sondheim musical entirely— but both Harrington and Gamble are fair of voice and character expression. There is a lighthearted conviviality shared between the pair once they hit “It Takes Two” and the appropriate levels of heightened tension between them leading up to that moment.  Gamble has an invigorating voice when it comes to her solo portion of “Maybe They’re Magic” but even more so when she takes to “Moments in the Woods.” Harrington has a voice like melted butter that simply drizzles into the ears of the audience sublimely every time he sings. “No More” is the eleven o’clock emotional hour of the show, heartrending and soul searing and delivered to perfection by Harrington.

Vanessa Reseland creates a wonderfully unique incarnation of The Witch in this production, modernizing her, revitalizing her, and reconceptualizing her in a way that fits the production like a slick satin glove. Reseland has a powerful voice that is well suited for all of the witch’s songs, but it’s the deep emotional connection that Reseland brings forth for “Stay with Me” and “Witch’s Lament” that turns heads. “Last Midnight” is delivered with wild abandon that really makes the audience take note of the emotional integrity and final turning point of the witch’s character in that moment.

The production is fascinating, remarkable, and hypnotizing in a way that is most pleasing. The final line of the finale even resonates with new meaning because of the way the story is retold and interpreted with The Fiasco Theatre. A truly rare once-in-a-lifetime moment that should not be missed, Into the Woods is not a lengthy visitor and should be caught before it mysteriously vanishes!

Into the Woods plays through January 8, 2017 in the Eisenhower Theatre of The John F. Kennedy Center for Performing Arts— 2700 F Street NW in Washington, DC. For tickets call the box office at (202) 467-4600 or purchase them online.

One thought on “Review: Into the Woods at The Kennedy Center”

Review: Into the Woods at Toby’s Dinner Theatre