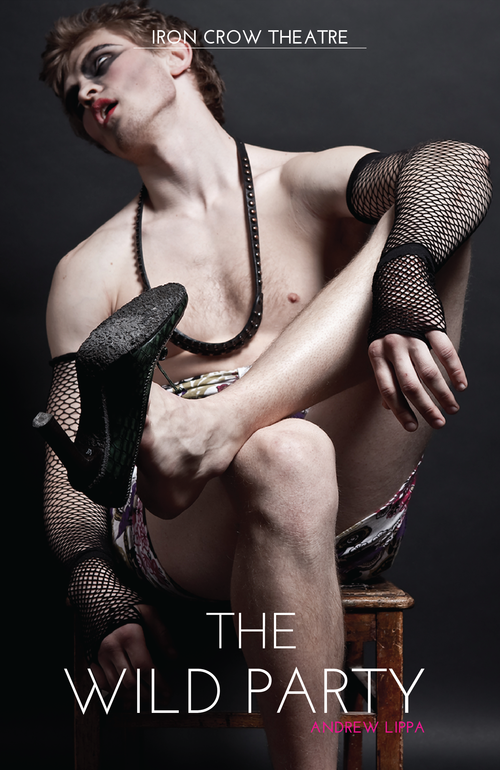 Iron Crow Theatre is kicking off their historic 2016/2017 season, entitled “Dark Play”, with a raucous bang, setting the bar high with expectations. Andrew Lippa’s The Wild Party, directed by Sean Elias with Musical Direction by Ben Shaver, lives up to those standards and is a scandalously swinging evening of titillating entertainment which plunges the depths of the seasonal through-line of dark play right from the word go. Deceptively delicious and deviously delightful there is so much more than meets the eye when it comes to ICT’s first musical theatre production in over half a decade.

Visually the production is stunning. Birthed in the shadows and breathing in the darkness of a nightmarish realm concocted by master visionaries Ryan Haase and Janine Vreatt, scenic and lighting designers respectively, the play space itself becomes a tantalizing phantom, possessed of a murky spirit that pulsates as its very own entity. Haase and Vreatt envelop one another’s creative intent, weaving elements of the set and light through each other’s creations in a seamless fashion that creates a Tim Burton-esque palette from which their fabrications spring.

There is a house, or the façade thereof, which sits askew or does it merely appear to be leaning into the temporal rift of reality? Haase’s signature treatment of fabric as painted wood bedecks the home’s visage, cloaking it in a dark and dreary purple, truly the stuff of nightmares. With hidden panels, and frighteningly intricate detailing on the furniture of the interior, there is something unearthly, almost demonic that burbles in the atmosphere which Haase has inspired.

Echoing these ephemeral nightmarish tendencies, Vreatt invites shadow, darkness, and garish light to the party as if they were the evening’s VIPs. There’s something in the way she catches light, not catches but rather— captures and enchants it to do her luminescent bidding across Haase’s set. Shadows leap into action, creating an infinite depth to the phantom chorus featured on the stage. Vreatt includes use of a variety of rarely used colors, including some wild teals and yellows which really enhance the nightmare concept of the show’s overall aesthetic. There is something masterful and moving about the way Vreatt uses light to frame actors, capture moments of emotional intensity, and overall just set the tone for the piece. In conjunction with Haase’s set, the idea behind this timeless nightmare where Director Sean Elias has placed the production, comes to full fruition with frightening ease.

The sparkling crown atop the stunning aesthetic of the show is the Costume work of designer Betty O’Hellno. A mangled mash of Rocky Horror meets Cabaret meets a drag show, O’Hellno’s vivacious and gaudy concepts far surpass the simple notion of nightmare when it comes to outfitting the cast. Rhinestones, sequins, barely-there shimmery sheer bits of fabric, all tossed asunder and yet with perfect intention to make the ensemble and even the principle players appear to be ripped from the pages of a cult classic but not without first passing through the lens of monstrous beauty. Burrs’ clown mask is of particular note for both its creepy appearance and tragic symbolism. Like the other designers working on the production, O’Hellno takes pride in the exacting detail of the costume work, really fitting each phantom and main player with a unique outfit that fits their personality like a tightly strung corset.

The show’s major misstep is its overall lack of choreography. While Robert Mintz is credited as the Choreographer, there is very little witnessed on stage which can be recognized as dancing. Loose movement, perhaps— and a great deal of the director’s scenic movement and overall blocking of individuals is quite striking— but ultimately the dancing which is expected, especially in numbers like “The Juggernaut”, is simply non-existent. This is disappointing as the music is so lively and all but demands dancing.

Musical Director Ben Shaver and Director Sean Elias work in tandem to achieve, despite the lack of choreography, what is ultimately a wildly successful production. The vision is there, the talent is well-placed, and ultimately the intimate telling of the story seeps into the audience and chills the bones resplendently. The choice to place the live five-person pit behind the audience is a smart one, providing exceptional volume balance in the open-stage space of Theatre Project. Shaver conducts the pit with enthusiasm, though there are one or two numbers, “What a Party” and “A Wild, Wild Party” where the tempo feels just a smidge sluggish. Shaver’s enthusiasm, despite these slower moments, is ubiquitously spread through the ensemble and well represented in their harmonious blends.

An ensemble of phantoms (featuring Fred-Fletcher-Jackson, Nick Fruit, Terrance Fleming, and Emily Small, among others) brings Elias’ nightmare vision together, skulking about in the background, oozing forward into the story, and ultimately carrying numbers like “What a Party” and “A Wild, Wild Party.” Cloaked in shadow, both physically and emotionally, these ensemble members exist as wild party goers and unsavory spirits of the other realm; this hybrid existence defines the show in a twisted new light and calls attention to their haunted movements in nearly every scene.

Mae (Kathryne Daniels) and Eddie (Jesse Marciniak) are two pips of energy amid the ensemble, their duet “Two of a Kind” (despite being uncredited in the program) is a wild interlude that showcases their chemistry and vocal abilities. Daniels and Marciniak are simply smitten with one another and play the quirky couple with ease. Scene stealing hams Oscar D’Armano (Adam Cooley) and Phil D’Armano (Brice Guerriere) are the gay life of the party in more ways than one. Playing these characters to the height of campy caricature, especially during “A Wild, Wild Party”, the pair pulls out all the stops when it comes to mining their interactions for hilarious moments of darkened comedy.

Cameo character Madelaine True (Valerie Holt) reveals her many layers— physically as well with her peel-away costume— and keeps the audience’s attention during background moments as well as those where she’s meant to be noticed. “An Old Fashioned Love Story” is ripe with humor and delivered wildly by Holt, giving the audience the giggles as she goes hog-wild into the song. Keep a close eye on her during the downstage bathroom scene and other moments once her reserved black threads come undone, you’ll be in for a tawdry treat.

Modern beltress Kate (Jessica Bennett) knows how to make an entrance to the party and steals the focus from everyone and everything when she storms the stage for her first solo “Look at Me Now.” Bennett has a strong voice that can easily be heard over her microphone and carries her sustains with great ease. Versatile in her portrayal of Kate, we see the plotting and conniving side as well as the tender and well-intentioned side when it comes to her interactions with Burrs. There is something perpetually unbalanced about Bennett’s Kate, which makes the flavors of saucy and sassy that she brings to the table fit the nightmare-scape of Elias’ production vison that much more readily.

Black (Sylvern Groomes Jr.) is a vocal balm to cam the nerves, an unguent to ease the mind, and a salve that soothes the soul. With a slick voice that layers in for quartets like “Poor Child” and “Listen to Me” there is a deep and moving sincerity that connects his character in earnest to the lyrics that he sings. Groomes Jr. holds his own among the four principle characters, particularly when wooing Queenie (Allison Bradbury) during duets like “Of All the Luck” and “The Gal for Me.” Elegant and regal in his composure as well as his delivery, you can’t help but feel for Groomes Jr.’s character as the story unfolds to its gruesome ending.

Burrs (Justin Mazzella) is a force to be reckoned with. Terrifying bordering on possessed by an unnatural evil, Mazzella delivers this character with gusto and a frightfully tenacious attitude. Mazzella’s voice, despite his character’s cold demeanor, is rich and satisfying, thoroughly fulfilling every time it alights on a song. There is compassion and deep emotional catharsis rolling out of him in waves; this is most strongly experienced during “What is It About Her?” With a voice that could enchant the angels, this devilish beast of a character that Mazzella creates puts the audience on edge with a shiver up the spine. How can we love someone so revolting, someone so worthy of being loathed? Mazzella makes this juxtaposition of his soul and his nature a wild party indeed.

As for Allison Bradbury in the role of Queenie, once she shakes off her initial uncertainty of the character’s physicality which is witnessed momentarily in the opening number, she slays the role and all but splits the audience in twain over whether or not Queenie should be pitied or praised. Bradbury brings the quintessential sound to the character of Queenie, her pipes more than suited with both power and intonation to support the difficult score. Her lyrical belts, wild riffs and sustains are exceptional, but are only one facet of what makes her rendition of Queenie so engaging. Bradbury, through her richly expressive facial features and pensive moments of stillness and silence while others sing around her, exposes a rare and raw vulnerability in the character; she humanizes Queenie.

This humanized quality that Bradbury brings to Queenie paired against the mesmerizing sound that Mazzella brings to Burrs makes the dynamic of their relationship astonishing. “Out of the Blue” and the trio, “Make Me Happy” (shared brutally with Black) are shocking to the core, flawless in their emotional and tonal beauty but upending when it comes to the way they play out. Bradbury and Mazzella together are simply unstoppable in this tour du force production that is set to stun audiences everywhere. Don’t skip your chance to see it— the run is limited— and you won’t want to miss your invitation to this wild, wild party.

The Wild Party plays through October 9, 2016 with Iron Crow Theatre at Baltimore Theatre Project— 45 W. Preston Street in Baltimore, MD. For tickets call the box office at (410) 752-8558 or purchase them online.

2 thoughts on “Review: The Wild Party at Iron Crow Theatre”

The Cradle Will Rock at Iron Crow Theatre