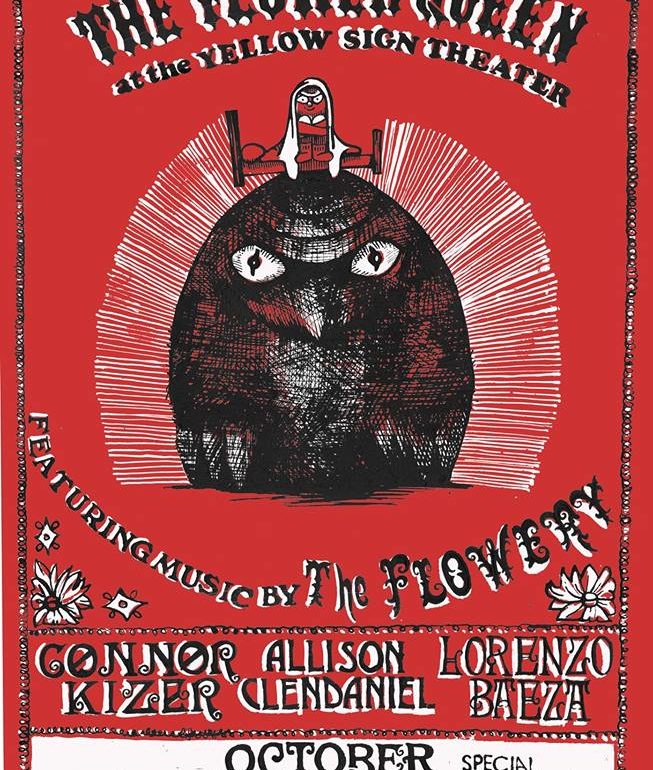 Let your imagination run away with you when you hear bumps in the night…this may birth poor monsters out of sheer nothingness and they may resent you for it. Such can happen in the mythical ether of The Flower Queen, a play by Connor Kizer now appearing on stage at Yellow Sign Theatre. With just three performers— one little girl and one imagined monster plus a graceful Ballerino, there is an hour’s journey through a dreamy nightmare or a nightmarish dream just depending on your mood for the evening. Most definitely a unique experience, steeped in mythology, stewed in the alphabet, and soaked in sound, The Flower Queen is that experience that we recall but don’t truly comprehend, much like a dream or a memory from the dreams of our childhood.

Focusing as a devised work with script by Connor Kizer and no director, the piece is at best described as unusual, but not without its own sense of purpose. One cannot call the work linear nor cyclical, but it does exist on its own curious trajectory, following its own set of rules. There is always sound, for example, even when there is no sound, which creates a separate kind of sound in the general absence thereof. The world is known and experienced through the lens of the little girl, Mary (Allison Clendaniel), and through that of the Monster (Connor Kizer), simultaneously. How it enfolds upon itself, enveloping mythological entities and histories in addition to entwining alphabets and Oghams is part of its alluring yet dizzying charm.

Though the show has no official director, it is not in any way lacking for designers. Mason Ross tackles lighting and Juliana Furioso tackles Scenic, Sartorial, and Property designs, with Clendaniel designing the sound and music. Ross’ approach to the lighting is both informative of the shifts in mood and tone found in Clendaniel’s music and soundscapes as well as informed by them to further generate these notions of dreams and nightmares. Combining his heavy use of blues and pulsating reds, particularly during the Tree Maiden dances, of which there are five— one for each of the vowels— Ross creates a chimerical existence that could only take root inside a bleary-eyed dream; this is the type of dream that one can only just recall snippets of as it fades from the eye with waking.

Juliana Furioso keeps the dress of Mary simple, which serves as a sharp contrast to the deeply involved Monster costume demonstrated on Kizer. Appearing as surreal hybrid of Where the Wild Things Are and Monsters Inc. with a hint of “Ugly Dolls” thrown in for good measure, Furioso breathes whimsy directly into this monster motif. The horrifying floating face which appears somewhere beyond the midpoint of the performance is enough to linger in the mind’s eye and create nightmares all its own beyond the experience of the production. Furioso’s incorporation of the blinking letters upon the Yellow Sign Theatre’s high drop screen is an artistic and well-intentioned use of digital media in this otherwise very physically driven production.

Kizer’s writing is somewhat esoteric, referencing Celtic mythology and alphabet Oghams; this does not however detract from the enjoyment or immersion of the performance if you are unfamiliar with the subject matter. There is a deeper level of meaning to be gained and appreciated if you do having a working knowledge of what’s being addressed in the performance but it is not effusive in such a way that detracts from the production for those that do not. Kizer manages to thoroughly ensnare the ideology of being a child at play with an imaginary monster, doing so with randomness and illogical moments that make perfect sense inside the mind of a child. The dialogue exchanges between Mary and the Monster feel authentic on a level that one might experience when having a conversation with a youngster about their imaginary play-friends. There is a poignant moment when Mary shuts the monster down once he starts attempting to explain the history behind the mythology informing the experience; this is a beautiful portrait of how a child’s mind would not focus on such lessons but rather on the importance of their own involvement in the conversation.

It’s Clendaniel’s music that is the trance-inducing hook. If you walk away with nothing else from the performance it will be the hypnagogic sensation that you may have been actively dreaming. Curating loops of music that are more like ellipticals of ceaseless rhythm and sound that warble around their own point of divergence, Clendaniel gives a distinctive voice to each of the musical movements— one that accompanies each vowel and subsequently features a dance performed by Ballerino Lorenzo Baeza— while still managing to draw threads of a unifying through line through each soundscape. Clendaniel’s use of uncertain repetition and unusual sounds further the exploration of the psyche as it exists in this production.

Ballerino Lorenzo Baeza is fully invested in the physicality of the piece. The first of the Tree Maiden dances is fluid, almost cleansing in its ritualistic undulation of limbs. Clendaniel’s music here is paired to this notion of water, soothing the performance aura with muted vocal calls. The second Tree Maiden movement is strikingly sporadic and jarring, almost as if Baeza’s limbs are twitching and jerking about with the intent to separate from the trunk of his body. Yet there is a haunting similarity to the sounds found within the musical accompaniment of this section. At length one could go one through the third, fourth, and fifth movements, but it is best to let them be experienced in person rather than simply read about.

The slight downside to the performance is the trans-meta element wherein the Monster addresses the notion that they are in the play of the dream world, and the Inception-esque levels that go along with that. It comes from out of left field and seems to serve no purpose to the inherent nature of the experience other than to call attention to itself, which seems slightly repetitive and off-putting. This aside, the working rapport that Clendaniel— as Mary— and Kizer— as the Monster— have with one another is convivial and earnest. The way they watch Baeza’s routines is almost as mesmerizing as watching the Ballerino in motion. There is a deliberacy to everything that occurs within the context of the performance, the meta acknowledgement aside.

A highly eccentric experience, The Flower Queen will open your eyes, ears, and mind to a world otherwise unexplored in the Baltimore DIY Theatre scene.

The Flower Queen plays through October 31, 2016 at Yellow Sign Theatre— 1726 N. Charles Street in the Station North Arts District of Baltimore, MD. Tickets are available for purchase at the door and in advance online.

Enter the Realm of the Flower Queen: An Interview with Allison Clendaniel and Connor Kizer

Review: From A Black Egg at Yellow Sign Theatre

Review: Horatio Dark’s Between the Sheets at Yellow Sign Theatre

Review: Horatio Dark’s Between the Lines- May Broadcast at Yellow Sign Theatre
Close