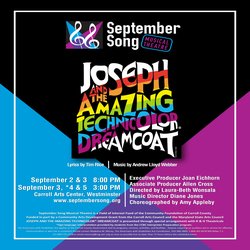 Close your eyes, draw back the curtain, and you will see for certain what you thought you knew. And what you thought you knew was that September Song, a dedicated summertime community theatre in Carroll County entering its 42nd year of producing a mainstage musical, is doing impressive work on its stage. You were right to think so as the company proves their worth as a community staple and heartfelt institution with this year’s production of Andrew Lloyd Webber’s Joseph & The Amazing Technicolor Dreamcoat. Directed by Laura-Beth Wonsala with Musical Direction by Diane Jones, September Song takes you way, way back many centuries ago— not long after the bible began— to a fun-filled and fabulously fantastical evening of community theatre where the heartfelt dedication and commitment to doing theatre and having fun while doing so its pouring off the stage in waves.

Production Designer Tabetha White takes the show’s titular adjectives— amazing and technicolor— and weaves them continuously throughout the design elements of the show. While the set’s base, an enormous marble staircase that could easily be from any biblical locale including ancient Egypt— is rather simplistic, the blue and golden hieroglyphs that frame the stage are a dazzling touch to the show’s aesthetic. It’s the lighting that really brings out the notion of technicolor. A nod of praise is well-deserved of Light Operator Jeffrey Wack for his ability to not only have the dancing disco feel happening in the light work as they blink on and off throughout the more up-tempo dance-heavy numbers, but for his precise color-coordinated blinks delivered impeccably during “Joseph’s Coat.”

These descriptors are also found in the work of Costume Master Janine Polanowski and Properties Master Missy Grim. Highlighting color whenever possible, especially in the coat and even in Joseph’s basic garments, Polanowski does not shy away from the over saturating the show with a rainbow of hues. Teal, pink, and purple lamé are the colors fitted on the Narrators three (a clever decision made by Director Laura-Beth Wonsala for the tremendously demanding role, splitting it into a trio of talented performers) making them pop spectacularly against the ‘bedsheet couture’ look befitted upon the brothers. There’s color everywhere if you just know where to look for it— Polanowski even gets clever when it comes to circulating in animal prints— no fewer than three are featured on Potiphar and his wife.

Choreographer Amy Appleby is smart and knows the strengths of her cast. Knowing exactly when to place the strong core of performative dancers (Danielle Bowser, Katy Cooper, Joan Firestein, Casey Golden, Christina Grow, Compton Little, and Brooke Nixon), Appleby maximizes the dancing potential of the show in this fashion for bigger numbers like “One More Angel in Heaven.” Appleby also has a firm handle on how to keep extremely large group numbers well-coordinated and pumping with energy. This is particularly true for “Go, Go, Go Joseph,” which features a series of claps and arm-gestures. The choreography featured throughout the show is populated by gesture-motion, which cleverly conceals those that are not as readily fleet of footwork.

Musical Director Diane Jones works with the cast to create a heartfelt, passionate sound for each and every group number. There is surprising strength and vocal integrity resonating throughout the entire cast and this is heard often and with great consistency throughout the duration of the performance. Jones’ work in particular with the Brothers (Chip Cotterman, Seth Hench, Michael Livingston, Rod Harrison, John Ferrara, Jim Stoneberger, Allen Cross, Jay Francies, Cameron Stoneberger, Payton Stoneberger, Bryant Gutknecht, and Dylan Snaman) is most rewarding, giving numbers like “Poor, Poor Joseph”, “Joseph’s Dreams”, and “Those Canaan Days” a blast of boisterous pizzazz. And the well-blended sound that Jones’ succeeds in exacting from the Children’s Chorus (Jeri DiBuono, Autumn Groves, Julianna Groves, and Quinn McIver) for “Prologue/Any Dream Will Do” and “Close Every Door” is impressive.

Director Laura-Beth Wonsala’s choice to split the role of the narrator among three talented women is just one of many intriguing and well-executed casting choices featured in the performance. Casting Chip Cotterman as Jacob, Potiphar and the Baker may seem like a tall order but it’s one that Cotterman lives up to with great aplomb. Cotterman, who fully embraces the campy and over-the-top direction in which Wonsala takes the production, really hams it up first as Jacob— particularly when it comes to chastising the eleven un-favorite sons— and does a number with his vividly animated facial expressions in his secondary and tertiary roles as well. Wonsala unapologetically goes for the shtick and camp in this production and lets the cast revel in the fun of it.

Other well-suited double casting choices include Casey Golden, whose primary role is that of the sultry Mrs. Potiphar, though her true moment in the vocal spotlight is singing in the rafters with her angelic soprano voice featured during “One More Angel in Heaven.” John Ferrara doubles up as The Butler, who is featured in “Go, Go, Go Joseph” and as Brother Naphtali, who leads the brothers and Jacob in a rousing rendition of “Those Canaan Days.” Michael Livingston, who is listed first as Brother Simon, doubles up as Pharaoh and is channeling some extremely royal rock-n-roll energy, thank you very much. Livingston puts a whole new hip-pop behind the Elvis inspired “Song of the King” and really gets the audience going when he wanders on down for an impromptu ad-lib scene beyond the boundaries of the fourth wall.

Bryant Gutknecht, playing Brother Judah, is a mischievously adorable brothers whose waggling eyebrows and cheeky facial expressions says it all just at the top of “Benjamin Calypso.” His clear voice and vivacious energy are exactly what the number calls for and he takes point in getting everyone into the tropical island inspired musical spirit. Seth Hench, who may be contending with Chip Cotterman for the title of ham of the show, really digs his heels into the comic shtick as Brother Reuben. Leading the brothers for “One More Angel in Heaven,” the audience gets a good taste of just how over the top Hench is willing to take the character, leaving the song in hysterical shredded ribbons.

Chelsea Paradiso, Kelsey Mai Jerzierski, and Lisa Spera mount the daunting task of the Narrator role in this performance. Sharing the role across three sets of shoulders make for an impressive feat, particularly when it comes to making three voices sound as one. Each of the three narrators has their moment to shine. Spera, who possesses the lower range of the trio, rounds out most of the iconic lead-ins to songs that the narrator is most readily known for in this show. Paradiso works her fantastical range and vocal-riffing ability in “Poor, Poor Pharaoh,” and Jerzierski astounds the audience with her ferocious belt at the end of “A Pharaoh’s Story” showcasing an intense power behind her singing capability. All three women are well suited for the role and make the show move along smoothly with their narrative skills.

The favorite son, Joseph (Michael Ferrante), is not only the titular character but the one strong of voice and acting ability in the production. Though his well-defined abs are painted in place (a lovely and humorous choice), his vocal ability is firmly affixed for all to hear. The warm radiant sound that arrives early in the show for “Joseph’s Dreams” differs greatly from the harshly intended tone delivered in “Who’s The Thief?” This transition is a remarkable display of the way in which Ferrante carries the character’s story arc. But the true signature song, “Close Every Door” is nothing short of sensational. With an echoing microphone effect in place, Ferrante carries this with crisp emotional poignancy and ripe vocal clarity, right through to the end of the number with a divine sustain. Truly suited for the role, Ferrante keeps the audience engaged with his story every step of the way.

It’s not too late to snag a seat to this fantastically heartwarming production of Joseph & The Amazing Technicolor Dreamcoat, but don’t wait too long— or a crash of drums and a flash of light will have this musical flying out of sight! Don’t miss September Song’s 2016 show!

Joseph & The Amazing Technicolor Dreamcoat plays through September 5, 2016 with September Song at the Carroll Arts Center— 91 W. Main Street in downtown historic Westminster, MD. Tickets may be purchased at the door or in advance online.

PLEASE NOTE: All remaining performance of Joseph & The Amazing Technicolor Dreamcoat are sold out, with the exception of the closing matinee performance on Monday September 5, 2016 at 3:00pm. Tickets are still available for that performance, but seating is limited! Tickets can be purchased here.