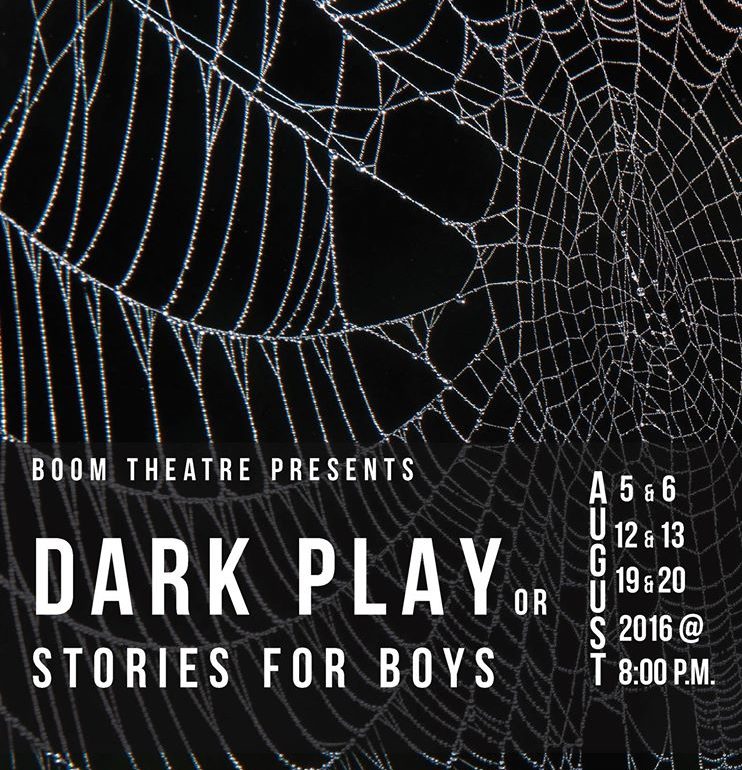 The question. The choice. The question. The choice. Do I tell the truth? Or do I make shit up? Truth is BOOM Theatre Company is engaging in an edgy piece of theatrical brilliance, penned by Carlos Murillo and Directed by Joshua Fletcher. Evocative and mind-blowing, Dark Play or Stories for Boys, is a richly engaging tale that sparks a fire in the mind, and draws a fascination from the dangerous games we play in our minds and our lives. Holding up a razor-sharp mirror to the audience, the production confronts danger and darkness in a world theatergoers know all too well, making for one thrilling theatrical ride over the course of the evening.

Relying on the tenants of the company’s core belief in simplicity and storytelling, Director Joshua Fletcher keeps the set and lighting cues simple. It’s Fletcher’s blocking and overall staging that reads quite cleanly and rather impressively considering the tight space in which the performance unfolds. Choosing an ally style configuration for the house seats and then working the players directly in the center as well as at the top and bottom of the space fully immerses the audience into the story as it unravels. There are striking moments where the constructed characters— primarily Rachel and also the Male and Female Netizen— ‘interact’ with Adam and these encounters occur with such belligerent intimacy that it is both intimidating and seductive. Staging Adam back to back with Rachel during some of their more sensual moments is just one of dozens of examples of this staging technique that Fletcher deploys throughout the performance.

The play moves surprisingly quickly under Fletcher’s keen eye, and the surprising choice to include an intermission— as the play is originally written without one— does not impeded the overall momentum of the show in the least. Fletcher’s precision in placing the intermission where he does enables the audience to fully process what they’ve just witnessed, which is crucial for maximum impact of the latter quarter of the show. In addition to his perceptive concept of timing, Fletcher manages to capture the essence of the digital world— personas and emotions confabulated inside the incubator of an online chatroom— and actualizes that into something that is vibrantly real, almost bordering on tangible. This is most notably achieved through having the cyber-constructed characters ever present and watching, signifying that they have become a part of the reality of the narrative, even when they are not presently active.

Identified as Male Netizen (Dustin Horsman) and Female Netizen (Tricia Ragan), the two multi-character tracks are delivered with vigorous aplomb in this production. Though Ragan has significantly fewer characters, the two that pop out are the angst-ridden mother of Nick— who flips quickly from a chastising parent to one that fears losing what little connection she has left with her son— and the ball-busting SVU detective, she holds her own as a character performer in the show. Horsman, whose characters tend to err on the side of comic relief— save for the Step-Father character— are equally well received. Both performers find distinctive voices, inflections, intonations, and even slight shifts in physical presence to demarcate the difference between the characters that they play, allowing for clean division of moments and occurrences throughout the script.

The perfect girl, but not so perfect that she’s unbelievable, is merely a figment of an overclocked imagination; Rachel (Ally Rambo) the girl of Adam’s (Nate Stauffer) dreams. Rambo, who is slight of presence— a smart choice for a cyber girl— looks as if she were crafted directly from a computer simulation. He speech patterns are slow, deliberate, intentionally disorienting so that her enigmatic presence remains a mystery. The heart-breaking exchanges that arise between Rambo and Stauffer feel incredibly organic, without a hint of artifice threaded through them. Compelling the audience to believe in her existence through the simplest of movements, gestures, and line deliveries, Rambo ensnares our senses as easily as she does Adam’s.

Stauffer is the epitome of gullible when it comes to portraying Adam’s gullibility threshold. Mired in the emotional angst that comes with being a teenaged boy who is both dorky and uncertain of himself, Stauffer captures the essence of this character in a timid and meager fashion that both serves the plot and the overall story arc in addition to the character’s depth. His emotions become palpable the longer and harder he experiences them. Waves of fear, discontentment, and uncertainty crash over him as the story scampers toward its conclusion and Stauffer processes each one in a manner that brings them bursting over the audience with gusto. The frighteningly fascinating interactions that are endured with Stauffer’s character come not from playing with Rachel, but rather the encounters shared with Nick (Anthony Chanov.)

With a remarkable stage presence, Chanov allows Nick to exist not as the narrative element to the story, but rather as a navigator that unobtrusively guides the audience through the swirling tempest that is the script’s plot. Playwright Carlos Murillo relies heavily on repetition, particularly in his recurring opening lines that grace the top of every scene. Chanov, however, dispels the mundane nature such repetitive cycles can have by discovering each one anew and with a different intonation of pathos. This suggestive infusion of emotion charts a course for the guiding direction of the pending scene, which ultimately influences the audience’s absorption of the details contained within it.

Chanov is profoundly present in each of his narrations, whether they are addressed more directly toward the audience or less so in an aloud recounting of his own memory. Possessed of an emotional tenacity that pads a great deal of the ranting explosions that occur for Nick— primarily in moments of monologue and soliloquy— Chanov is able to showcase his versatility as a performer with this character. Honing in on the distortion and warped sense of desperation that festers inside of Nick’s mind, Chanov unleashes this twisted character in its full glory for the audience to wholly experience the plethora of near-psychotic feelings that seize him throughout the course of the tale.

Truly stunning and equally thought provoking, BOOM Theatre’s Dark Play or Stories for Boys will leave you questioning. It will stimulate a conversation that makes you question your own gullibility threshold and provokes your mind to question the truth and its meaning for all of your life encounters.

Dark Play or Stories for Boys plays through August 20, 2016 at BOOM Theatre Company at the Unitarian Universalists of Fallston— 1127 Old Fallston Road in Fallston, MD. Tickets can be purchased at the door or in advance online