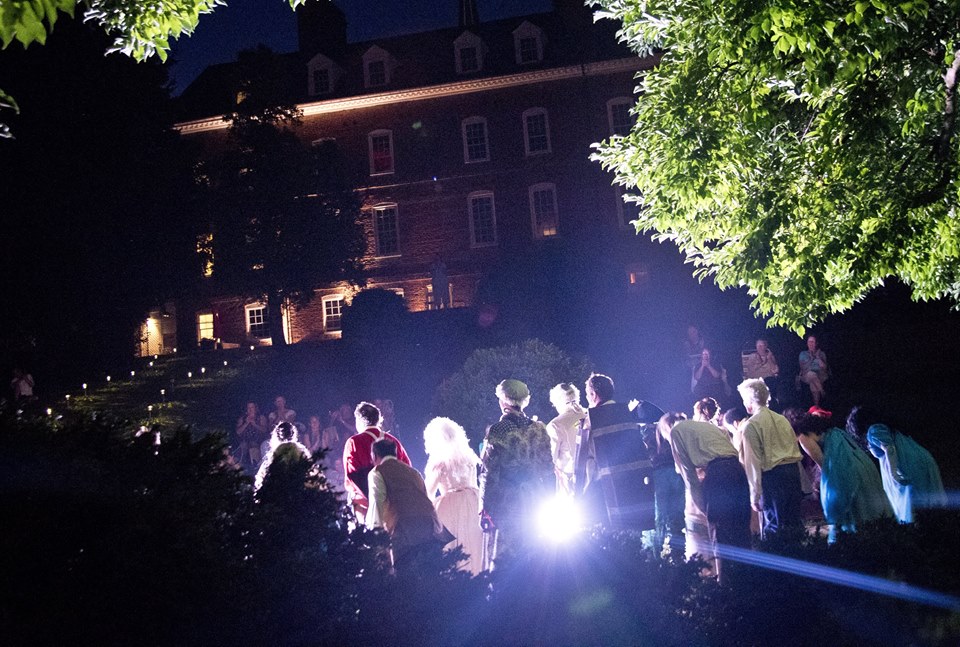 Lord, what fools these mortals be— thinking that summertime theatre in Annapolis need only involve outdoor musicals! Annapolis Shakespeare Company has set up shop, for a two-weekend limited engagement, in the luxurious Gardens of The Charles Carroll House for their current production of Shakespeare’s A Midsummer Night’s Dream. Directed by Sally Boyett and Donald Hicken, the performance is a tightly trimmed rendition of the whimsical faerie-laden comedy, which showcases mesmerizing costumes, a dazzling all-natural scenic backdrop, and pays homage to the Bard in the style of open-air theatre.

Sally Boyett and Donald Hicken do an exceptional job of rendering the five-act text down into its bare essence, allowing the performance time to exist at just 90 minutes (105 with the addition of the interval) while still fluidly capturing all the major and minor plot details and unwinding them in true Shakespearean fashion. Boyett and Hicken keep the pace plowing along without adding the element of rushed urgency to the show’s overall tempo, which is remarkable considering the drastic yet appropriate cuts they’ve made to the script. The directorial duo also succeeds in making the language of the Bard accessible to the modern audience’s ear with their trained expertise guiding line delivery across all of the characters featured in the production.

Stunning costumes against a striking natural background make the show wondrously strange aesthetically, a whimsical craft of beauty that blends against itself in a most unusual fashion. When Theseus (Brian Keith MacDonald) and Hippolyta (Renata Plecha) first appear on the scene they could quite easily be George and Marth Washington, if the infamous historic couple were kowtowing to the regal British fashion sense of the late colonial era. This visual stimuli, gorgeous as it is, juxtaposed against the more nautically influenced faerie costumes— equally striking in their appearance— creates a hiccup of disconnect between the two worlds, which in essence works towards the separation of the Faerie Realm and the Athenian one, but remains agape when the worlds become husbanded by the tricky costume switch on Puck at play’s end. All of this can be forgiven, however, because of how truly enchanting the costume pieces are— particularly the flowing watery gowns of the Faeries.

Boyett’s signature choreography works its way into the script as well, featured most prominently in the movement of Peasblossom (Christine Jacobs), Cobweb (Eternanda Fudge) and Mustardseed (Lauren Hardcastle) the three Fae-attendants to Queen Titania (Renata Plecha.) The graceful dancelike motions of the Faeries, which serve as magical movements when it comes to controlling the human realm, add a sense of whimsical enchantment to the show. There are also actual dances executed throughout the performance, which harken back to the late 18th century and are performed on fleet feet with giddy spirits.

One of the most brilliant moments of the production that Boyett and Hicken have developed is an unseen treasure, which occurs in the far back lawns of the gardens, practically out of focus. Using the full depth of the sprawling greenery the Gardens has to provide, a “chase” of sorts can be seen as the three Athenians make their way down the hill and across to the hedges whilst Oberon and Puck are in an active scene. Because of what happens on either side of said scene, this little chase becomes highly entertaining and the perfect understanding of how to fully utilize the space given. Boyett and Hicken also make good use of their limited lighting— a flood of purple against a large tree every time the magic flower is brought into play or blue upwardly angled foot-lighting for the Faerie Queen and her court— to augment the traffic upon the naturally grassy stage. Relying heavily on the slow-moving sunset encourages the suspension of disbelief as the play’s natural conclusion ends up happening in the night’s darkness, a quirky yet enjoyable notion considering Moonshine (Kim Curtis) is brought out during the “play-within-a-play” scene at that point.

The disconnect for the performance on the whole is with the young lovers, Demetrius (Bill Dennison) Lysander (Doug Robinson) Helena (Olivia Ercolano) and Hermia (Laura Rocklyn.) While there are a great many moments where individually they feel connected to the text— the prime example being the well-executed fury-driven mock fight choreography between Ercolano and Rocklyn during the second act— on the whole character development and relationship development feels underdone. Despite being picked up by area microphones, a great many of both Robinson and Ercolano’s lines feel shouted at the top of their voice without the emotional intention to support such volume levels.

The more amusing and heightened performances in the production come from the ragtag band of players, with an earnest Peter Quince (Ken Kemp) as their leader. Snout (Johnny Weissgerber), Flute (David Johnson), Snug (Chris Rogers), and Starveling (Kim Curtis) make for some hilarious interactions when they are called into play, watch closely this band of merry men as they pull highly animated facial expressions and melodramatic campy responses to things that are happening in and around them, particularly during the “play” at the show’s end with Johnson going toe to toe with Bottom (Tony Tsendeas) for who can ham up their death scene.

Tsendeas is a true Shakespearean ham when it comes to owning the role of Bottom. Loud, obnoxious, and hilarious— all qualities deserving of a good Nick Bottom and thusly Pyramus— Tsendeas is an overzealous crackup in the role. His unending death-attempts during the “play” scene at the show’s conclusion are some of the most hysterical moments in the performance. Once Tsendeas finds himself to be an ass, his interactions with the Faerie Queen are most amusing as well.

Renata Plecha shows an impressive dynamicism between her dual portrayal as Hippolyta and Titania. The same cannot be said for her counterpart Brian Keith MacDonald, playing Theseus and Oberon. Where Plecha draws a distinctive line between her reserved and pristine Hippolyta, lashing out into something wild and larger than life as Titania, there is virtually no change in MacDonald’s portrayal of either. Plecha exudes grace and charisma as the Faerie Queen, and is a maelstrom of temperament waiting to be experienced. MacDonald’s saving grace comes in the form of a sprightly Puck (Matthew Pauli.)

Pauli, who relies heavily on the physical comedy of his costume to engage with the play’s natural vein of humor, brings a unique approach to the mischievous urchin. There is a vague air of a swarthy Captain Jack Sparrow seemingly reminiscent in some of his mannerisms and line deliveries. Making Puck more of a pirate-like rogue, who tumbles about quite literally all across the lawn, serves the show well as it adds laughable humors to the performance in liberal doses.

Visually exquisite, A Midsummer Night’s Dream opens the Gardens of The Charles Carroll House to a new community of viewers who ordinarily might give such a place a pass when wandering through the historic dockside city.

A Midsummer Night’s Dream plays through July 17, 2016 with the Annapolis Shakespeare Company in the Gardens of The Charles Carroll House— 107 Duke of Gloucester Street in historic Annapolis, MD. To purchase tickets call the box office at (410) 415-3513 or purchase them online.

Review: POE…And All The Others at Annapolis Shakespeare Company