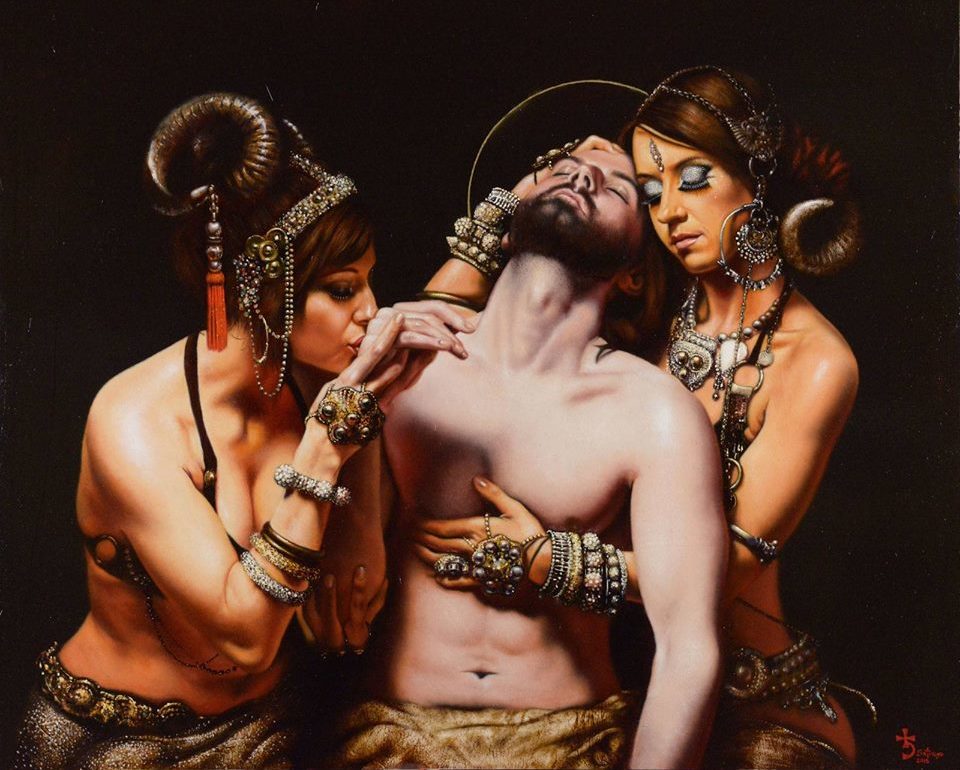 Hey there, Charm City. Are you ready for a night of naughty entertainment? Then just pick up the phone and dial the party line. That’s right, it’s back. Horatio Dark’s Between the Lines has taken that naughty delve once more and plundered its way Between the Sheets! Just four months after the initial Between the Sheets broadcast, which was a Valentine’s Day special event, the antiquarian of the insane, the master of the macabre, and the navigator of the netherworld is switching gears once more to bring you highly stimulating and sinfully scandalous erotic radio play! Now playing at the Station North Wind-Up Space, a venue noted for its versatility— hosting everything from concerts to parties, flea markets and then some— Horatio Dark brings Katie Rousse back as the evening’s party-line hostess with the most-est for this sexually charged evening of raunchy radio play. Foregoing the usual “Horatio Dark” character (voiced by Jon Freedlander), Rousse steps in with her naughty narration and gets the evening underway. The night’s entertainment? Four scripts— one a recurring revisit from the last installment of Between the Sheets, and three new ones— featuring two penned by H-Dark himself.

Sound Master Dave Marcoot and SFX assistant Eidhnean Illuviel take up their posts behind the radio-readers to provide, as always, exceptional sound effects in true 1940’s radio play style. A wave of accolades goes to Marcoot’s aural experience as he brings a great deal of raunchy sounds to the stage for the evening. Assisted by Illuviel, his use of questionably unknown substances— referred to in the captioned picture above as ‘pancake batter’— create sounds that are the exacting epitome one might expect to hear from a Sci-Fi sexually charged radio play. Loaded with innuendo and blatant smutty soundscape, Marcoot and Illuviel keep the aural enhancement of the show living up to the high-bar set at the regularly scheduled Horatio Dark Between the Lines broadcast.

Hearts in Shadow by John Higgins

Picking up some years after the great war where we last left David and Charles (from the February broadcast of Higgins’ Hearts of War) we find the servicemen retired and enjoying their heightened sex drives in the privacy of their own homes only to experience coitus interruptus as they learn that their country needs them to raise to the challenge of providing excellent service once more. Davy (voiced this venture around by Nairobi Collins) and Charles (read through this time by Chaz Kedesla) find themselves in quite the pre-dick-ament as it were, as all of the “wedding tackles” in London have turned up missing and it’s up to the happily closeted couple to locate them and put a stop to whatever is dismantling them from their owners.

Higgins’ script is overripe with sexual puns and delivered hard and fast by Collins and Kedesla who bring some interesting interpretations to the British accents of yesteryore in this script. Party-line Hostess Katie Rousse steps in during the script to save the day, ad-lib-reading as the Constable (who was inadvertently not-assigned at the top of the read) and adds some further humor to the performance. The whole story is drowned in sex, as a show ought to be if being featured on the Between the Sheets broadcast.

Line of the Script: “When do we start this mission to save the purple-headed soldiers of London?” – Charles.

SFX of the Script: perfectly over-articulated sound of a zipper being undone for the line “take it off, man!”

With sex puns riper than day old bananas on the dock, the tallyman cometh in Horatio Dark’s script about the oversexed detective and his highly unusual ways of dealing with the cases that land in his lap. While the script’s writing is a strange hybrid of Ghostbusters meets detective Noir, the performers give extra pumps of life to the action that happens therein. Purely gratuitous smut, though delivered with hints of an actual storyline underlining the heightened sexcapades, Horatio Dark makes a monster of his two brain children— the radio broadcast of Between the Lines and the wantonly fabulous filth of Between the Sheets.

Titular character Dick Lingham finds himself in the capable hands of Mike Jancz, who plays the rather foppish detective with a flair for the flamboyant tenfold. The accent, the delivery, the wildly hysterical affectation of voice and pronunciation make the script hysterical. Add in the absurd moaning, panting, and otherwise blatant sexual gratification heard on the character of Connie Lingus (read admirably by Lori Travis) and you’ve got a ridiculous venture down sexual street that just delivers again and again and again.

Line of the Script: “In. Out. I don’t rather have a preference where you come, but please do enter.” – Dick Lingham, Preternatural Sexual Detective

SFX of the Script: plunger in the “pancake batter” for— well, exactly what you think it’s for.

Following the trend of the evening, Jancz and Doyle’s script is littered with sexual puns, but in addition to being hilarious, the material is well organized, and a plot is detectable! An action-jammed plot that follows along the lines of a James Bond film, Doyle and Jancz take careful pride in constructing their characters, plotlines and twists, as well as the jokes so that nothing feels out of place in this blatant satirical approach to “Sex + Bond = Between the Sheets.” Highly stylized writing settles the audience easily into the world of James Bond strung-up on sex, and the actors with their flavorful accents and well-practiced deliveries give it that extra punch of panache putting it over-the-top as “script of the broadcast.”

Alix Tobey Southwick and Jeffrey Gangwisch, who read as the villainous Vulva Labiaski and Anton Jackoff respectively, run away with the show when it comes to their affected accents, particularly the nefarious sexually-charged Russian sound Southwick creates when delivering lines like “…make the entire world go spin cycle!” Regular radio personality Rex Anderson takes on the cheeky ‘hero’ role of Agent69 Oliver Cramwell, joined by Liz Christmas reading as Special Agent Chastity Teasewell. The pair make for a dynamic duo (just like Bond and any one of his girls) consistently throughout the reading.

Line of the Script: A TIE
“With the Americans and Brits in bed together we can snatch that Vulva red-handed!” – Special Agent Chastity Teasewell

“Get your finger off of that button, Vulva! There’ll be seamen spewing into this chasm any minute now!” – Agent69 Dick Cramwell

SFX of the Script: Succu-bots attacking Agent69 (use your imagination)

With a basic formatting that was lifted directly from just about any amateur porno ever watched, Horatio Dark proves that he will sink to the lowest of lows in the name of smut when it comes to Between the Sheets writing. A bit trite in the style and overall construct (it’s the basic “we’re two hot individuals who are going to now seduce— the repairman, the deliveryman, etc.), Horatio Dark makes it a unique piece by throwing random space/Martian/alien language and nonsense words into the script for everything and anything spoken by the two title characters. (Think of Amy Wong from Futurama, still intelligible but sounding peculiar.)

Again the performers to the rescue where the script falls short, with the talented Emily Ward and Jess Rivera reading for Laginar and Cladgkey respectively. Their total sororal-style bond plays strongly throughout the script as they take turns pleasuring one another and then their unsuspecting victims who come upon them in each installment of the piece. Rivera’s orgasmic scream steals the show, as does the totally monotone and robotic delivery of the “Repair Unit” as read by Alix Tobey Southwick.

SFX of the Script: the rubbing of gangli on the polyp (you had to be there to hear it and understand!)

CONCLUSION: Serving its purpose, Between the Sheets pioneered Horatio Dark’s Between the Lines out of its shell once more and into the realm not of the netherworld but the nether— well, you get the picture. Serving as the first stand-alone performance of Horatio Dark’s broadcasts outside of its former home, if the audience attendance was any indication, a thriving new venture is getting underway at The Wind-Up Space with this installment and hopefully future installments of the show.

Review: Horatio Dark’s Between the Sheets at Yellow Sign Theatre