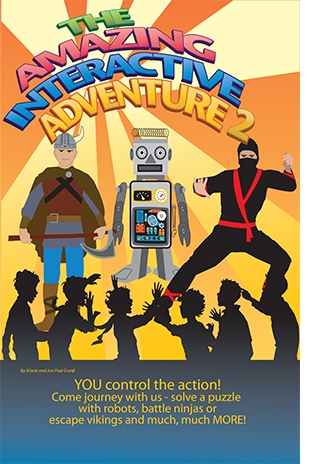 Afraid your children are spending too much time with their video games? So much time that they might just get sucked into them and never return because they can’t beat the evil boss at the final level now that he has control of the keyboard that controls the game? That’s exactly what’s happening to Charlie— a smart, funny, young video game programming kid— in The Amazing Interactive Adventure 2 now appearing live on stage with MET’s The Fun Company! Only it’s up to you to help Charlie out! In this exciting interactive adventure, much like the title describes, it’s up to the members of the audience to help save Charlie and get everyone back on the right side of the game! Written by Allison and Jon Paul Duvall and Directed by Giovanni Kavota, this zany madcap adventure is like no other and will keep the kids laughing and giggling in and out of their seats for just over an hour’s worth of fun theatrical entertainment.

The world of Minecraft is readily in play given the work of Set Designer Matt Vance. Looking exactly like the cross-sectional grid (complete with flying wall props crafted by Devin Gaither) one encounters in the game, Vance brings that virtual reality of a video game into 3D existence upon the stage. Costume Designer (who wears a secondary hat in the show as Fight Choreographer) Steve Custer really gets the imaginations going but not without a little help from some previously instituted video game classics. The Lackey and Ensemble-Henchman have costumes that look very similar to Waluigi and Wario, both notorious bad-guys from the Super Mario Bros. world. Even the Boss character takes on a red Bowser-inspired look under Custer’s inspired couture, while JunkBot and Charlie have more modern gamer looks, particularly Charlie whose sartorial motif fits that of a Pokémon Trainer.

Video game magic is pumped in via sound system, mainly Sound Designer and Music Composer Callan Holderbaum and Thom Huenger. With 80’s-esque midi files overlaying popular music and a whole slew of sound effects that ring true to anyone who’s ever played on any generation of video gaming consoles, Holderbaum and Huenger go to town when it comes to creativity with the aural affections of the performance. Add in strobes and clever blinking colors, crafted by Lighting Desinger Doug Grove and you’re ready for an epic and amazing adventure in the video game realm!

Director Giovanni Kavota encourages the ensemble performers to really engage the audience with what’s happening. Pre-show involvement includes company members Lia Seltzer and Matt Baughman (who appear throughout the show as various characters) welcoming kids onto the stage for some basic ice-breaker improv style games. Both Seltzer and Baughman are pumped full of energy. Seltzer in particular delivers a radiant enthusiasm and addresses each kid individually to really help them feel like they are a part of the show.

Seltzer is later featured in the performance, first as a mom, but mainly as JunkBot— a super useful robot. But JunkBot isn’t just any ordinary robot! Whenever Seltzer’s character begins to power down, the audience is encouraged to jump up and spin around to help wind up her power cells and get her back on her feet. Baughman is featured throughout the ensemble too, with his most memorable role being the Pirate Captain at the Skulls & Groans Comedy Club where he invites members of the audience up onto his ship to tell really bad pun-laden pirate themed jokes.

All three of the ensemble performers— Seltzer, Baughman, and Katie Rattigan (who is credited mainly as the Boss’ Lackey) appear in an epic scene-stealing routine known as “Attack of Kung Fruit!” This interactive experience involves the kids karate chopping their way through some crazy zany fruit ninjas— who bellow phrases like “Snack Attack!” and “Juice Truce!” Seltzer plays a giant banana, Rattigan a berry, and Baughman a wizened sensei pineapple in this sketch and it is one of the most hilarious bits in the piece.

Rattigan, who is the lowly lackey to The Boss (at this performance Thomas Scholtes) does a great job of playing the character with simplicity. This makes for some great laugh moments, particularly when it comes to ice cream. Scholtes, who has mastered the maniacal laugh of a super evil Boss Villain, is exceptional when it comes to responding to the audience. Putting his supreme improv skills to use throughout the show with great consistency, Scholtes encourages the kids to feel like an active part of the program, even if it means heckling him.

As for Lauren Johnson, who plays little Charlie, she’s primed to relate to the children of the audience. Taking suggestions, engaging them in the scenes where interaction is called for, and balancing them into quiet attention when the scenes aren’t so interactive; Johnson is a great theatre-for-young-audiences player. Energetic like the rest of the cast and just as engaged in the storyline, Johnson and her band of merry friends make it an amazing adventure just as a show called The Amazing Interactive Adventure ought to be!

The Amazing Interactive Adventure 2 plays through June 26, 2016 at the Maryland Ensemble Theatre’s The Fun Company in their Stage2 Performance Space in the Historic FSK Hotel building— 31 W. Patrick street in downtown historic Frederick, MD. For tickets call the box office at (301) 694-4744 or purchase them online.

Review: The Cat in the Hat at MET’s Fun Company