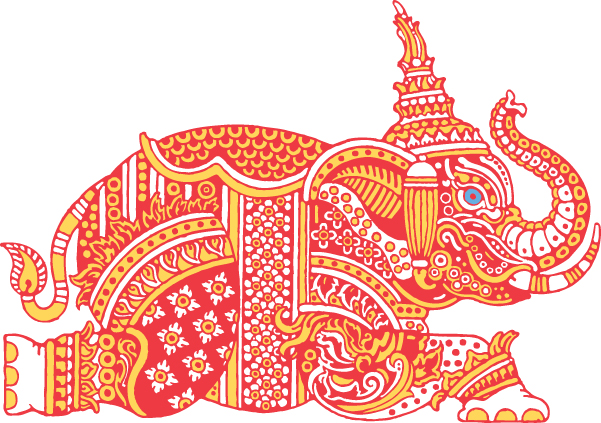 Who? Who? Who? The St. Gabriel Miracle Players. What? What? What? The King & I upon the stage as the 2016 spring musical. Directed by Chuck Dick with Musical Direction by Rob White and a live Orchestra conducted by Matt Elkey, this tried and true Rogers & Hammerstein classic comes to the community in the very merry month of May with all of its iconic music, well-loved stories, etc. etc. etc.

In true community fashion the show’s aesthetic is crafted not with one designer in each area of expertise but with a full village of visionaries who share a passion for making theatre thrive in the local scene of Woodlawn. Set Design Team Members Barbara king, Cathy and Gregory Krzywicki, and John Sealey construct the infamous “palace of king” and deliver a strikingly decadent appearance in doing so. Inspired by the original palace in Bangkok, the vibrant red and glimmering gold tones capture the essence of mid-19th century orient, baring it open for all to gaze upon its vividly inspired imagery. The enormous golden statue of Buddha is a resplendent touch to fully encapsulate the world views of The King of Siam.

With a bench as deep as Mrs. Anna’s compassion, the Costume Designer Team, comprised of Sally Kahn, Suzanne Reams, Christy Stouffer, Linda Swann, Mrs. Anna herself— Heidi Toll— and Mai Wolfe, bring a strong sense of the period to the performance with their costume collection. Anna’s swollen skirt collection in particular is worthy of note, particularly in the way it contrasts in both shape and muted matronly colors against the bright shimmering fabrics and well-fitted forms of the costumes seen on the wives. The Costume Team turns it around for the top of the second act, however, putting English Tea Party Princess puffy gowns on all of the King’s wives and they look divine.

It’s a puzzlement as to how a show with a full-length mini ballet can have no Choreographer, but perhaps the answer is in knowing that Dance Captain Kristy Wiggins knows her dancing. Leading “The Small House of Uncle Thomas” as Eliza, Wiggins keeps the energy up across the various performers involved in that meta-play-dance scene. Though The King & I is not known for its infamous choreographed routines, Wiggins does lend her seasoned eyes to the notorious “Shall We Dance” waltz shared between the show’s titular characters.

One of the loveliest sounds featured during the performance is the live orchestra, led by Conductor Matt Elkey. Keeping the nearly two dozen live players in tune, on tempo, and above all balanced against the singing performance, Elkey does an exceptional job of conducting his way through Richard Rogers familiar score. The orchestra and its conductor should be commended for their hard work, especially during “The Small House of Uncle Thomas” as the trickier rhythms and delivers of Rogers’ score occur most frequently in that segment of the show.

Ensemble members from across the community fill out the cast under the watchful eyes of Director Chuck Dick. Bringing his seasoned knowledge of the show as well as the titular role of King to the table, Dick and company put their hearts into each number and scene. Dick, who delivers a perpetual resting grumpy face as the King of Siam, plays well with Heidi Toll, playing the “I” or Anna Leonowens in the production. Infusing their chemistry with the right amount of quippy banter, particularly during the “no higher than mine” exchanges at the end of the first act, Dick creates a memorable working relationship between he and the English school teacher.

Toll, as the much displaced widow of England, is energetic and enthusiastic in her delivery of Anna. Bouncy and bright to lead into “Getting to Know You,” Toll inspires all of the Princesses (Ingrid Benitez, Amabelle Dalay Flores, Emeli Flores, Veronica King, Abena Poku, Efua Poku, Princess Ojong, Faizah Soh, Farrah Soh, and Molly Wiggins) along with the Wives (Ann Baden, Deborah Bonds, Ashley Case, Sandra Cruz, Lauren DeSha, Ann Henry, Heather King, and Kristy Wiggins) to be jubilant and joyful in this number. Her cheeky sarcasms radiate through “Shall I Tell You What I Think?” as well.

The songbird voices of the show come from Lady Thiang (Kacy Conley) as well as the two ingénues Lun Tha (Paul Ballard) and Tuptim (Tania Rosa Bindhoff.) Conley attempts and succeeds to carry a Siamese inspired accent (the only other performer to do so successfully being The Interpreter, played by Ashley Case.) Conley’s singing voice is warm and operatic for “Something Wonderful.” Bindhoff shares similar operatic qualities in her voice, particularly during her somber and melancholic rendition of “My Lord & Master.” It’s when Bindhoff’s voice pairs with Ballard’s in “We Kiss in a Shadow” and later in “I Have Dreamed” that the true magic of young lovers is not only heard but felt across the audience. Ballard has a deeply resonate voice that is perfect for the role of a young man in love with a sweet young woman.

Precocious and precious at the same time, Prince Chulalongkorn (Alexander Fraiser) and Louis (Finn Smith) are the perfect little show stealers in this production. Fraiser sweeps through the palace with a grand gait worthy of one waiting in succession to the throne, and his accent is very impressive. Smith, as Anna’s son, has a polished English accent and the boys play well off one another. When they bicker and then resolve to apologizing like gentlemen it’s delightful, but even more so when they sing together. Though the lyrics indicate a reprise of “A Puzzlement,” the song is credited as “Something Wonderful Reprise” and it is one of the most endearing moments in the performance outside of the young lovers throwing themselves into each other’s arms.

Hurry! Hurry! Hurry! To enjoy a wonderful evening of community work at its finest. This will be a delightful classic to enjoy for the whole family, etc. etc. etc.

The King & I plays through May 22, 2016 at The Saint Gabriel Miracle Players— 6946 Dogwood Road in Baltimore, MD. Tickets can be purchased at the door or with an advanced reservation request online.