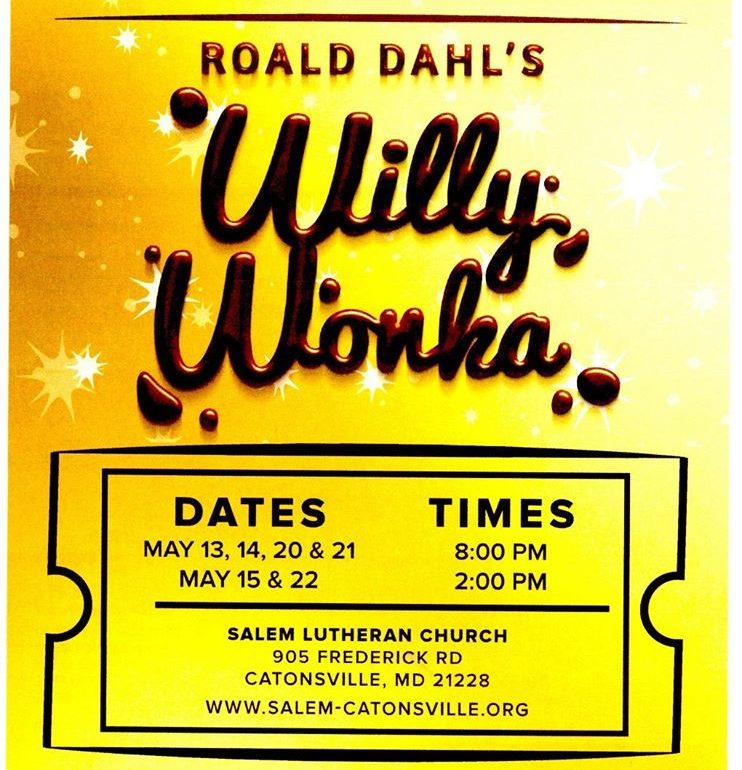 Come with me and you’ll see a world of pure imagination. You’ll begin with a spin travelling in the world of their creation and what you see will truly defy explanation! If you want to view paradise, simply come to The Salem Players of Willy Wonka for the most Wonkariffic time you can imagine! There’s singing, dancing, Oompa Loompas, and candy! Directed by Anita Spicer-Lane with Musical Direction by Sterling Gray, this fantastical creation will take you straight to the heart of Roald Dahl’s enchanting tale about a young lad, four spoiled rotten children and the most wonderful chocolate factory in the world.

What wonderful imaginations the entire community brings to the spring production at The Salem Players, and their hard work and determined efforts pay off in the magical brilliance that is reflected in all of the innovative design work witnessed throughout the performance. With whole tribes of dedicated workers, just like the Oompa Loompas from Willy Wonka’s factory, a wondrous set, which starts as a dreary and dismal ramshackle house for the Bucket family, is transformed into a candy-filled wonderland inside the gates of Mr. Wonka’s Factory. Set Designers Don Schwartz and Paul Timmel work together with a team of Set Artists, Decorators, and Constructors (Kaela Chen, Shannon Willing, Anna Care, Sara Toscano, and Marleigh Toscano) to make the most delectable miracles appear on the stage.

The window paintings, which are featured in full focal spotlight compliments of Timmel’s Lighting Design, depict each of the marvelous rooms— illuminating lollies for sweets in bed and marshmallow pillows just to name a few— in Wonka’s factory. The walls are covered in candy! And the magical pink sugar boat looks truly whimsical with all of its multicolored sweets lining the edges. All of these magical elements come together to create the wonder that is witnessed inside of the factory, but it’s the Video Design Work of Katharina Boser that adds an extra flavorful enchantment to the tale.

Working together with Director Anita Spicer-Lane, Katharina Boser does some truly impressive prestidigitation with the video projections— including a live look over Charm City and Camden Yards when Charlie, Mr. Wonka, and Grandpa Joe make their great escape from the factory in the great glass elevator! The chocolate river and waterfall as well as the scenic jungle background are all just scrumptious elements that make the mouth water when it comes to the scenic magic featured in the show. Be sure to keep an eye out for the screen-gem magic that happens during Mike Teavee’s big scene, it’s a blast!

Fitting right into the magic and whimsy of the show, Costume Designer Tricia Morgan, who doubles as the show’s Choreographer, has each of the ‘bad children’ looking good in their colorful outfits. Morgan is clever and thinks outside of the box when it comes to the Oompa Loompa costume design as well, giving them a rainbowriffic appearance that makes them extra dazzling. Morgan’s choreography is simple and energetic. A lot of jazz hands and box-stepping keeps the characters entertained and enthusiastic for the happy numbers featured throughout the show.

Musical Director Sterling Gray, who plays the live piano and leads the other instrumentalists for the added benefit of live music during the performance, keeps the children sounding strong when they sing in group numbers like “The Candy Man” and “I’ve Got a Golden Ticket.” Blending harmonies with ease for “Burping” and “Cheer Up, Charlie,” Gray lends a sprinkling of musical expertise to these duets and smaller group numbers to keep them sounding swell.

Director Anita Spicer-Lane has an exceptional production on her hands, filled to the brim with eager-eyed youth performers and adults alike. The special effects that she includes in the performance, like a clever shift in the walls to bring the group of factory tourists forward once the walls start to close in, pay homage to the movie and the story. Spicer-Lane has a knack for driving the pacing, making the show speed along like the pink candy boat down a fluid and flowing chocolate river. It’s a delicious delight that tastes better than a bar of even Mr. Wonka’s finest chocolate!

Oompa Loompa doompety doo! They’ve got a perfect puzzle for you! What do you get with such theatrical feats? Filling the stage with dramatical treats? What do you see when you’re watching this show? You’ll have to buy a seat to come and know!! The answer is amazing! The Oompa Loompas (Clara Broscious, Elizabeth Fitch, Georgia Kelley, Kathleen Prince, and Berlyn Wells-Huber) are too precious for words. Marching their little life lessons in all five of their songs, this quintet of cute performers are so tasty you’ll want to eat them up, especially when they don feather boas and hit the hard syncopated rhythms of Oompa Loompa Song #4.

There are terribly nasty no-good children infesting the chocolate factory and they’re accompanied by their horribly no-good parents as well. Bringing syrupy southern twang to the factory, Violet Beauregarde (at this performance Carlie Carullo) and her mother Mrs. Beauregarde (Julie Kempton) sass off at Mr. Wonka and pay the price once Carullo has to have a piece of that enchanted chewing gum. Another strong dose of accents comes into play with little Augusta Gloop (Molly McNair) and her mother Mrs. Gloop (Anna Care.) The Gloop gals have thick German accents, thicker than fudge and their song “I Eat More” is a boisterous bubbling number filled with bonbons of fun.

Snotty, bratty, spoiled, and absolutely horrid, Veruca Salt (at this performance Elizabeth Fitch) delivers a full blown tantrum when she rolls into her solo number “I Want it Now.” With a wildly expressive face and a shrill shrieking shout every time she demands the word “now”, Fitch is a total nightmare incarnate (making her a great actress as the girl is simply sweet as can be off the stage!). Her father, Mr. Salt (Fran Huber) is simply nuts. Kooky and off-kilter with a wandering English accent a bit like sticky nutty toffee, Huber plays the manly role with great comedic aplomb and really passes equally vivid facial expressions along when watching Fitch throw her tantrums.

Mike Teavee (Zachary Polignone) is the epitome of problematic children these days, wrapped up in their gadgets with absolutely no attention span. His mum, Mrs. Teavee (Katharina Boser) give a great duet early in the show for “I See it All on TV” where Boser gets to show off a hint of some funky dance moves with Polignone delivers a heaping helping of bad attitude and disrespect to the humorous news channel reporter Phineous (Orbie Shively.)

Shively, who opens the production lending his smooth vocals to the role of The Candy Man, delivers one of the show’s most iconic songs, “The Candy Man.” Quite the chocolate charmer, Shively really entices the audience to enjoy this song, leading the children and other ensemble performers through it with ease. His quirky questioning character, Phineous the Reporter, is delivered with strong comic timing and really makes some of the scenes with the children as they discover their golden tickets quite memorable.

Memorable performances and comic gold is growing right out of the bed in the Bucket household as well! Grandpa George (Steve Kargauer) Grandma Georgina (Sue O’Connor) and Grandma Josephine (Sara Toscano) are a hilarious trio, accompanied by Grandpa Joe (John D’Amato) of course, that adds a great deal of laughs during the exchanges that happen with Charlie and Mrs. Bucket (Kelly Beauchamp.) Most of the laugh moments come from Kargauer’s character being mostly deaf and mishearing things like candy and thinking someone has said brandy.

D’Amato jumps to life as Grandpa Joe, giving a rousing good performance opposite of Charlie (Zachary Zappardino) once they get going and on their way to the factory! Zappardino, whose voice is so melodious one could easily float away on a marshmallow cloud just listening to it, is a sensational Charlie Bucket and gives a great performance for songs like “I’ve Got a Golden Ticket”, “Flying”, and “Think Positive.” His energy is radiant, his enthusiasm clear, and his overall singing and acting abilities are strong. Perfect for the part, Zappardino is fantastic as Charlie Bucket.

It all comes down to the man whose name is on the factory. And on the candy bars. And in the title of the show! Mr. Willy Wonka, played gracefully, ridiculously, and wonderfully by John Dignam, is just the sort you’d expect to run a magically enchanted chocolate factory filled with dreams, hopes, wishes, and wonder. With a syrupy voice sweet as honey and smooth like chocolate, Dignam invites the children, the adults, and everyone in the audience to take this sugary journey along with him when he sings “Pure Imagination.” Guiding everyone— both in his factory tour and as the audience’s narrator— along through the tale, Dignam lets his whacky side loose, his serious side simmer, and his vocal resplendence resonate through numbers like “The Golden Age of Chocolate”. He even turns on the sinister and spooky for “There’s No Knowing”, giving everyone a chill of terror for just a moment, which makes him splendidly versatile; he’s a true mallow-fudge ripple delight!

It’s time to make all your scrumdiddlyumptious dreams come true, so hurry and get your golden ticket to see The Salem Players’ production of Willy Wonka before they close the gates to the factory for good.

Willy Wonka plays through May 22, 2016 at The Salem Players— Salem Evangelical Lutheran Church at 905 Frederick Road in Catonsville, MD. For tickets call (410) 747-0720 or purchase them online.

Review: Picasso at the Lapine Agile at The Salem Players