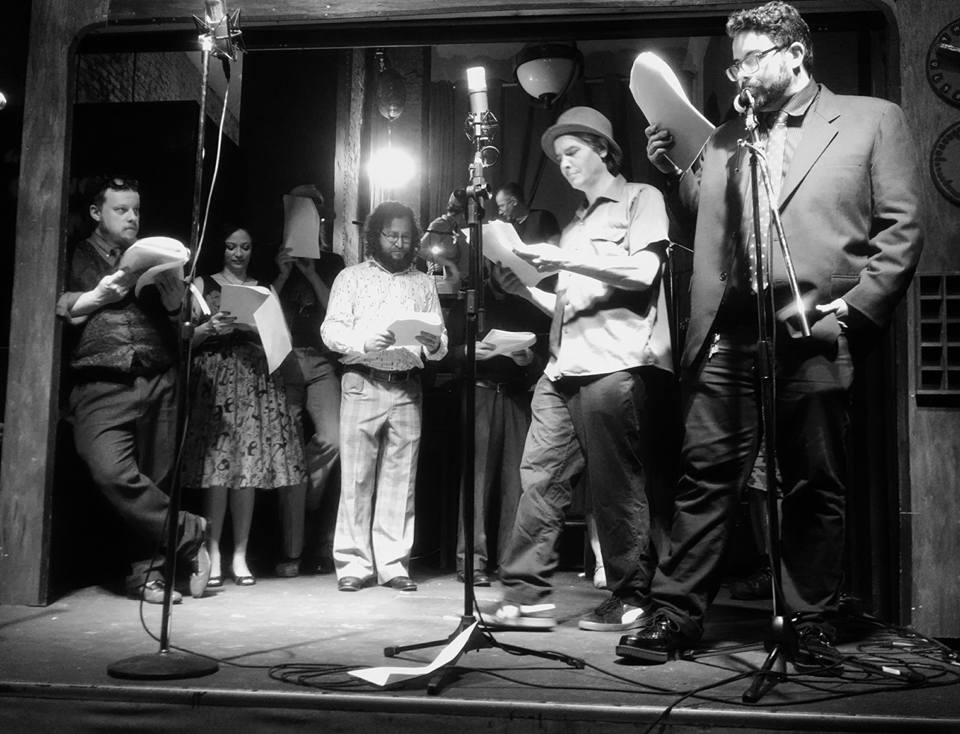 Good evening, Charm City! After a month’s brief pause, the Master of the Macabre, the Navigator of the Netherworld, the Antiquarian of the Insane as returned to WYST (taking up residence at the old Yellow Sign Theatre on Charles Street in Station North) to bewitch your ears for the evening. Yes, oh yes, it’s the May Broadcast edition of Horatio Dark’s Between the Lines! Featuring four new radio plays to entreat the ear (and should you be lucky enough to attend in person— ensnare the eye), this month’s installment has shifted a few things around— including its broadcast date, being the 1st Monday of the month instead of the last! How thrilling!

The May broadcast of Between the Lines welcomed the return of Jon Freedlander, the recurring voice of Radio Host Horatio Dark. After a scratchy throat, no doubt caused from all that excessive grave-digging that Horatio so often gets up to, Freedlander rejoins the cast and is up to his asylum-worthy antics once more. Lending his uniquely ghoulish flare to the character, Freedlander wrangles forth all the laughs there are to be had from the audience in tonight’s broadcast alongside Announcer Aaron Travis as the pair top-and-tail each of the four plays— two non-sequiturs and two serials— as well as banter their advertisement tie-ins during the audio pauses between the scenes of each play. The writing for the advertisements was particularly sharp this month, extra witty and hitting hard with the hearty laughs.

Working their theatrical magic, Dave Marcoot and Eidhnean Illuviel team up to master the Foley and all it has to offer throughout the evening. Particularly on point with the timing and veritable range of effects this evening, Marcoot and Illuviel turn up the audible heat as it were to really engage the audience in the radio experience. A full series of new sounds were experienced throughout all four scripts, with each having their own moment of aural triumph over the course of the evening.

Less Than Chrome: A Bennington Marcus Mystery by John Higgins

Switching up the general running order, where the non-sequiturs debut in the first half of the evening and the serials debut after the intermission, John Higgins’ continuing serial was first out the gate for the evening of the May Broadcast. With two of the show’s primary performers temporarily decommissioned, the running order wasn’t the only thing switched out for this performance. Taking on the role of Bennington Marcus for the evening, Mike Jancz speaks the character with his own brand of personal menace. A hybrid of angry gravel and homage to the role’s originator, Jancz gets the gritty notion behind Marcus in this episode, which features dog-fighting and chrome-children kidnappings.

Temporarily taking up the role of the chief, Doug Johnson does an exceptional job of channeling the utter irate fury that goes into all of his barked lines, particularly when it comes to telling off Theo16 about how putrid he smells. Reprising their regular roles, Jeffrey Gangwisch takes to Theo16 as does Lori Travis to Dr. Erica Page. Gangwisch delves into deeper, more fierce anger in this episode, experiencing what Marcus refers to as “righteous indignation” and does so in true chrome style.

Higgins’ progression of the plot keeps fans ever-pressed to the edge of their seats as they delve further and further into the world of Marcus and Theo16. There is an earnest vein gashed open between the detective team when the issue of “lower life forms” comes into play. Ann Tabor, making her BMM debut as little Clara, arrives to report her missing dog Shaka (barked brilliantly by Scott Burke) and tensions between the flatfooted gumshoes escalate quickly. Dark and poignantly penned, Higgins goes for the jugular in the twists this particular episode takes, but redeems the controversial topic of dog-fighting and kidnapping with a heartfelt conclusion, particularly for the character of Theo16. An extra special nod goes out to Todd Gardner, voicing the “Lowlife” with exceptionally hilarious twang and to Brandon Perry, playing the baseball slugger George Roman. The sensual charm laid on by Lori Travis’ character at Perry’s jock-enhanced sportsball speech patois makes for one hell of an exchange between the pair.

Line of the script: A TIE!! Chief— “…file this one away: The way you smell right now? It smells like the Mummy and Frankenstein had a wrestling match in a swimming pool full of spoiled milk!”

Marcus’ Narration— “…You would be pretty amazed how far a fake mustache and goofy rug will get you. Add a fake scar made in a blender with some rubber cement and puréed red licorice and no one dare look you in the eye.”

SFX of the script: The clanking silverware and stirred coffee mugs in the diner

The Whistler by Horatio Dark

The lead-in for this show is particularly hysterical. Horatio Dark (voiced with haunting hints of humorous macabre by Jon Freedlander) starts off with a madcap run of a long-stretched pun, needing to hang “Art” (screamed by Aaron Travis) on his walls. This is a wildly uproarious way to introduce the non-sequitur, penned by Horatio Dark himself. Taking a loose riff and homage nod to the radio program and movie of the same title (inspired by Fritz Lang’s German film, M, staring Peter Lorre as the title character), Horatio Dark’s script turns the premise of the unseen and unfriendly “whistler” into an entity that only poor Mary (narrated into frantic hysterics by Allyson Washington) can hear.

Mary’s husband, Oscar (voiced by Eddie Lee III) has dialogue filled with the “acceptable misogynistic” tendencies of husbands in the late 40’s and early 50’s though his quips about Mary’s over-peppering of dinner brings forth a few chuckles. Scott Burke appears as “Doctor Fitzpatrick” and Jess Rivera as the title character, providing the creepy and ominous whistle that follows Mary everywhere she goes. Allyson Washington slowly simmers Mary’s hysterics to a frantic boiling point, which serves the progression of the quick-paced script well. But it’s Alix Tobey Southwick’s cameo as Candice, a chickee from Mary’s office, that steals the script away with her casual but hysterical water-cooler style gossip.

Line of the script: Candace— “…Whistling? No, the only thing I can hear is John from accounts getting fresh with Sarah over there by the coffee machine. He’s a married man, you know…”

Making his writer’s debut at Horatio Dark’s Between the Lines, Todd Gardner takes the audience on a trippy space trip that addresses politics and space-culture tropes while delivering zany characters and surprise twist endings that entertain the audience for the duration of his script. Much of the dialogue and banter exchanged between Captain Reggie (read and ad’libbed by Nairobi Collins) and Emissary Stevens (delivered to the pinnacle of melodramatic theatricality by Michael Stevenson) clips along with a witty and natural pace. Delving into political assimilation, Gardner’s script addresses and readdresses the notion of consent— penning Andronike as the figure being pursued with Reggie and Stevens being the elements of force and persuasion respectively.

Stevenson delivers Emissary Stevens with a silver-tongued charm, at least during the initial courting phases of attempting to entice Andronike to join forces with the council. Things quickly delve into madcap theatrical hysterics and Stevenson rises to the challenge of hamming up the part, acting out a great deal of the gestures that go along with such antics. Collins, as the rogue and brutish voice of force, has exceptional comic timing and makes these exchanges with the sensually calm and level-headed Andronike (voiced by Katie Rouse) absolutely delightful. The scene stealer of scene stealers here, however, is Jess Rivera reading as General Madden. Bombastic and irate beyond compare, Rivera gives a rich and robust anger to the General as she goes at berating the two knuckle-headed diplomats over their latest blunder. Gardner wraps the script with a nice tease of an ending, surprising and satisfying in both its existence and delivery.

Planet of the Toys: A Rex Pylon and Dot Planet Tripper Adventure by Horatio Dark

Are you read, Junior Planet Trippers? The adventures continue with Rex Pylon and Dot this month and you’ll never guess where they’ve landed this time! What’s that you say? The Planet of the Toys? Why however did you guess? It’s in the title of the episode? Oh boy! Lost as ever, Rex Pylon (reprised by Derek Vaughan Brown) and Dot (reprised by V Lee) find themselves on a planet that has Dot all caught up in a case of the giddy-stupid giggles of gaiety. Setting her eyes on a Pretty Princess Penelope dollhouse from her childhood, the adventure begins! Lee is exceptionally bubbly this go-round and is all but space-tripping with energetic and enthusiastic excitement over discovering these toys. Per the well-established dynamic, this both bristles and worries Rex. Ever his adventurous self, Vaughan Brown lets Lee take point in this adventure, really switching up the dynamic of their explorations.

Enter Teddy (voiced with cuddly fluffy sweetness by Emily Ward) and later King Jack (Mattie Rogers.) The vocal affectation that Rogers delivers with King Jack is an amalgamation of the Charlie-in-the-Box from the Island of Misfit Toys a la Rankin/Bass’ Rudolph and Snagglepuss hopped up on cough medicine. Anyway you call it, it’s hilarious. Her delivery of absurd lines like “Not toys? Not creators?” draws the laughter hard from the audience as the reality of toys with and without purpose comes into play. The lesson learned in the episode is saccharine and precious, and of course the script is not without Rex Pylon’s patented JUDOPUNCH! Though it should be noted that attempting to JUDOPUNCH a Teddy Bear will ultimately fail due to the teddy’s fluff-n-stuff nature.

Line of the script: Dot— “…eatin’ someone else’s super is for Finks!”

SFX of the script: The tinkling music box sound when Rex Pylon and Dot are brought before King Jack.

New scripts, new writers, and a healthy dose of humor all around, this month’s broadcast features fine writing, fine performances, and a special birthday celebration for Announcer Aaron Travis. (The evening’s performance concluded in a well-wished rendition of Happy Birthday from cast, crew, and house to the man in charge.) Despite some technical microphone issues (mainly cable bangs and booms), which in their own right provided some entertainment as various actors engaged and incorporated them into the evening’s program, the show was a smashing success and promises to make for an equally impressive podcast.

Horatio Dark’s Between the Lines was a one-evening event occurring on May 2, 2016 at The Yellow Sign Theatre— 1726 N. Charles Street in the Station North Arts District of Baltimore. Be sure to attend the regularly scheduled Horatio Dark’s Between the Lines on the first Monday of every month starting at 7:30pm. Arrive early as seats fill up quickly.