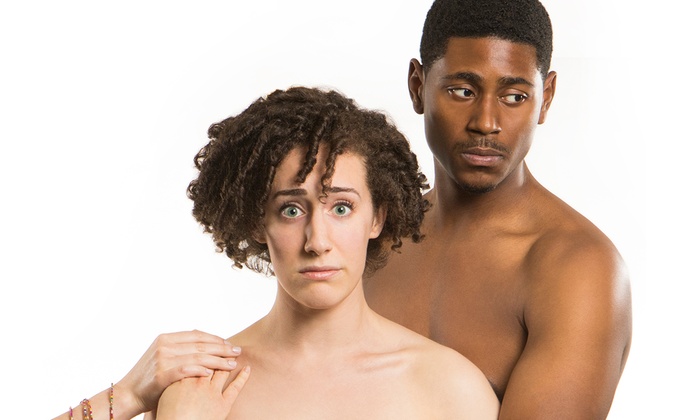 If you want to know the truth you need to ask the right questions. Is there an evocative and sharply penned new work by Bathsheba Doran now appearing in the Max Theatre at Signature Theatre this spring? Yes. And it’s called The Mystery of Love & Sex. Directed by Stella Powell-Jones, this epigrammatic instance of entertainment tugs at the heartstrings when it comes to the ever-changing dynamic of relationships be they between friends, lovers, family, or the self. Touching and peppered with sharp wit, this piquant new production arouses the mind and enlightens the heart to the ways of existing with other human beings.

An initially deceptively simple set does not overwhelm the audience upon entering the Max Theatre for this production, but the opening scene lends itself to the minimalist approach conceptualized by Scenic Designer James Kronzer. True scenic creativity comes into play once the southern homestead is revealed and a decadent household façade is revealed hiding behind a black scrim. Kronzer’s use of drop in trees serves as a fluid transition from the interior of the home to the backyard. These basic design elements laid against Lighting Designer Jesse Belsky’s mood enhancing illumination creates the perfect backdrop for this versatile story that unfolds itself upon the stage.

As the scenic shifts from one moment to the next do err on the lengthier side of the time clock due to the three-quarters thrust layout of the space at present, there are brief glimpses of blackout that settle over the audience between beats of the show. While noticeable, these transitions are smoothly covered by the musical remixing of Sound Designer James Bigbee Garver. The funky, modern hybrid of music that Garver blends together fits both the chaotic dramatic structure of the play as well as the zesty arguments of the characters. Each of these soundscapes that ushers one scene into the next serves as intriguing contemplative underscoring for the minds of the audience as they process what they’ve just witnessed and digest its emotional and textual content before preparing to intake the next moment of the show.

There is little if anything to be found by way of fault in Director Stella Powell-Jones’ approach to Bathsheba Doran’s new work. The DC area premiere is well received in Powell-Jones’ seasoned hands as the emotional transitions of the play flow as smoothly as the technical and scenic ones. Doran’s writing is emotionally engaging as the dynamics of the relationships are ever changing, churning in constant revolution and upheaval of themselves. This dizzying display of love, hate and a plethora of other strong emotional connective tissues, finds a relatable home among theatergoers and pleases the senses as it is explored one beautifully chaotic and heartrendingly cathartic explosion at a time.

Doran’s work explores the nature of love in many facets. The way a father and mother can love a daughter, the way a family friend can love a family as if it were their own, the way two close friends can love each other even when they hate each other, all of these notions are layered over the intimate topics of sexual preference, sexual involvement, and how things can become royally screwed once sex is involved. Doran’s writing is smart; the textual exchanges are constructed in such a way to feel modern yet timeless relevant to any audience member who watches the show, and the subject matter is relatable to everyone who has experienced puberty.

The testy family dynamic between Charlotte (Shayna Blass) and her mother Lucinda (Emily Townley) and father Howard (Jeff Still) is explored from the play’s onset and then continually throughout the performance. Townley makes it known early on that she shoulders the burden of the play’s comic relief. Her physical delivery of her character’s quirks are mirthful and zany, giving her a surefire footing for that much needed laugh when situations grow too tense. Townley’s thick accent is the epitome of southern charm and enhances her polished and refined behavior particularly when she’s being a gracious host or polite mother. Her sense of comic timing is impeccable, especially in exchanges with Still’s character midway through the performance. Still, who channels the anxious energy of the stereotypical Brooklyn Jewish man, is a lively performer who works the turmoil of the situation to his advantage every chance he gets. Letting his frustrations lead the way into and out of all of his conversational exchanges, Still has some of the most potent expressions experienced throughout the performance because they come from a place of authenticity.

Shayna Blass, as the central focus of the show, is a whirlwind of crazy wrapped in shimmering layer of explosive emotional experiences. Grounded in her more severe moments, sincere in those that are meant to feel heartfelt, and curiously quirky— not unlike Townley’s various hilarious moments— Blass shifts rapidly through the changes that her character experiences without faltering. Her interactions with Johnny (Xavier Scott Evans), which swing all over the involvement spectrum, are the driving force behind the play. Evans, who follows a linear progression of self-discovery which is reflected in his physicality, is a good complement to Blass in every scene in which they play together.

Both Evans and Blass shatter the emotional and psychological expectations brought forth by their characters, making the strife, confusion, and ultimately the love experienced between the two in all senses of the word accessible and palpable to the audience. A unique bond that pulls them together and tears them apart serves as the undercurrent of the performance and is felt consistently throughout the show almost like the heartbeat of their lives as time marches forward.

A remarkably engaging and enjoyable performance, The Mystery of Love & Sex is a stellar piece of theatrical entertainment perfect for the love that blossoms in the spring.