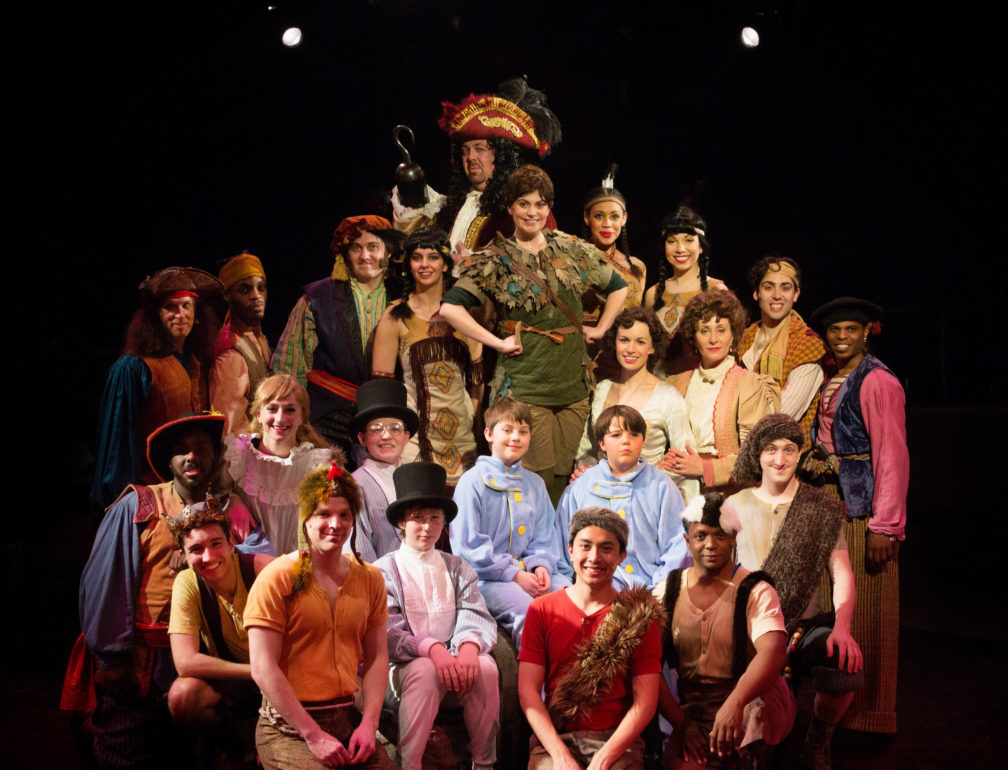 There’s no happier thought than magic and wonder and enchantment, especially not when it comes to the theatre! A place beholden of wondrous talent, magical moments, and enchanted evenings, Toby’s the Dinner Theatre of Columbia is now proudly presenting a timeless family classic with their production of Peter Pan. Directed by Toby Orenstein and Mark Minnick, with Musical Direction by Brandon Fullenkamp, this lively time-honored treasure will spark fond memories of childhood for the young and young at heart. A remarkably enjoyable evening of lively entertainment is soaring to you straight up from the stage and this one show that should not be missed this season.

Encouraging the imagination in a most scintillating fashion, Resident Set Designer David A. Hopkins fills in the Toby’s stage with just enough scenic detail to paint the storybook images and let the audiences’ imagination do the rest. This is such an important detail for a production of Peter Pan as one cannot reach Neverland without a healthy dose of imagination. The nursery window sits perched above the stage so that Peter Pan really can fly down into it. Hopkins’ crafts a fun and fanciful slide down into the hidden hideaway of Pan and the Lost Boys too! You’ll marvel at the metal framework of the Jolly Roger Pirate ship and how it seems to be fitted specifically to the pirates running amuck aboard it.

The scenic work is enhanced with the illuminating craftsmanship of Lighting Designer Lynn Joslin. Bringing full sweeps of darkness to the stage for cross-fade scenic change overs, Joslin knows how to focus an in-scene moment so that transitions happen smoothly and without detracting from the action that’s happening on stage. The stars that lead to Neverland twinkle in full all around the space and the hazy purple mist with warm amber accents that sets the Indians on the move is as wondrous as the characters who are highlighted in Joslin’s work. Her crowning glory is the creation of Tinkerbell— credited in the program as an actual character, a ball of light no bigger than your fist.

Joslin shares the “role” of Tinkerbell with Musical Director Brandon Fullenkamp, who gives the fairy her sassy piano-keyboard voice. Bursts of rainbow coloring zip about the space and land on objects of the set, and occasionally right on characters, thanks to Joslin’s smart design work and each of these movements is accompanied by a quickly improvised sprinkling of tinkling notes from Fullenkamp tucked away out of sight in the orchestra pit. Fullenkamp deliver’s the evening’s score with zest, taking up the tempo of a great many numbers to more fully energize them.

The only thing that outshines the luminescent Tinkerbell is the vibrant couture befitted to the actors— characters and living props alike— by Resident Costume Designer Lawrence B. Munsey and Costume Assistant Mary Quinn. Munsey and Quinn’s vast array of unique styles gives each performer a pump of personality. No two lost boys, pirates, or Indians are the same. While distinguishing each ensemble and cameo character, Munsey and Quinn craft iconic looks for Peter Pan as well as the Darling Children and Captain Hook, giving them each a signature piece to be noted by. The dashing red coat suits Hook’s personality to perfection while the earthy leaves with just the slightest glimmers catch the eye on Peter Pan all throughout the production.

Directors Toby Orenstein and Mark Minnick entreat the audience to something exceptionally brilliant. Inspiring such happiness across the stage the audience is sure to be flying just like Peter Pan by the end of the production. The pacing of the show is smart, the zippy energy that infectiously spreads from one performer to the next keeps the thrill of never growing up alive and fully radiant upon the stage from Nana’s opening bark to Peter Pan’s final departure. Orenstein and Minnick’s working knowledge of the space is flawless and their blocking as well as overall movement and transitions keep the audience wholly invested in the story every step of the way.

Oh the cleverness of Mark Minnick’s Choreography! Truly inspirational, Minnick creates a living magic which he breathes into each dance number and it is these moments that carry the performance from one scene to the next. Blowing a hearty breath of jubilant juvenile attitude into numbers like “Wendy” and “I Won’t Grow Up,” Minnick delivers a stunning balance of the wildness of children with strikingly synchronized dance moves. There is a fine golden thread of precision woven from one dancer to the next as they leap, twirl, and dash about embodying the spirit of wild and unruly children, while still looking sharp in their execution of these grand routines.

Minnick’s show-stopping choreography never rests, and each band of characters has its own delicious style that wends its way through these magical routines. The Pirates in particular, whether they are sashaying through “Hook’s Tango” or flouncing through “Hook’s Tarantella” are just as spirited and engaging as the Indians who move with a sweeping ferocity through their bodies during “Indian Dance.” The choreographic crowning glory of the show arrives early in the second act with an astonishing routine, “Ugh-A-Wug.” Loaded with a plethora of unique styles, Minnick captures the rhythm, tempo, and tone of the number and infuses it into the way the actors move, stomp, and drum through the song. Mesmerizing and purely magical genius, Minnick’s choreography is the heartbeat of Neverland, the spirit of Peter Pan, and the magic in which everyone will believe before the night is through.

With a cast full of talent, every performer living in the sparkling glimmers of Neverland enchantments, the show is brilliant for all ages. The Indians (Heather Marie Beck, Erica Clare, Andre Hinds, Rachel Kemp, Julia Lancione, Anwar Thomas, and Brook Urquhart) stun with their meticulous prowess, creeping through the mist when they dance. Led by Princess Tiger Lily (Amanda Leigh Corbett) the striking movements of this bunch puts the tingle of adventure straight into the spine. Corbett, who is vocally ferocious and could roar down an entire forest with her tenacity, makes her mark during “Indian Dance” and again during “Ugh-A-Wug” where she vocally goes line for line with Peter Pan in a stellar moment of friendship and fancy-fun atop the big wooden table.

Spunky energies possess each of the children in the play, whether they’re Lost Boys (AJ Whittenberger, Jordan Moral, Scean Aaron, Chris Rudy, RJ Pavel) or the Darling boy, Michael (at this performance Gavin Willard) and John (at this performance Brian Rusk.) Pavel, who doubles up as the hilariously comic Nana is equally enthusiastic when it comes to bustling about the nursey. Aaron and Moral, who plays Curly and Tootles of the Lost Boys respectively, should be noted and praised for their highly energetic acrobatics which pepper their performances throughout. Gavin Willard has wildly expressive facial features, particularly in the early scenes of the nursery and his cheerful chanting of “Candy. Candy! CHRISTMAS!” is too precious for words during “I’m Flying.” Brian Rusk, as the older Darling son, has a similar moment though with much more polish and a hint of sarcasm during “I Won’t Grow Up,” trying to insist upon proper grammar among the Lost Boys.

Mothering the Lost Boys and her dear darling brothers, Wendy (Katie Tyler) is a delicate child with a sweet but strong voice and a stern matronly temperament when it comes to enacting the role of “storyteller” and “pocket-maker.” There is an almost prat-like know-it-all nature Tyler delivers when addressing Peter in the nursery but she softens quickly and grows wide-eyed with cheery delight with the prospect of learning to fly. Harmonizing beautifully with her mother and the boys during “Tender Shepherd”, Tyler’s voice is a dulcet addition to the cast of exceptionally talented voices.

Bicarbonate of soda the pirate ensemble is bubbling with buoyancy! Floating through numbers with the most fantastical of flamboyant airs, these surefire scallywags are a harkening back to the gaiety of old school musical theatre. Every pirate (Jeffrey Shankle, Darren McDonnell, Brook Urquhart, Anwar Thomas, and Andre Hinds) has their moment to shine and snag the attention of the audience, particularly McDonnell who carries on at the end of “Hook’s Tarantella” with his “to the ship, to the ship,” shenanigans, earning him a fierce scolding from the formidable and occasionally frilly Captain Hook.

Tumbling onto the scene as a comic plus one, David James takes up the role of Mr. Smee and bandies about the stage with a humorous comic gait. Channeling a bit of Bob Hoskins’ Smee from Hook, James pays homage to the diminutive yet cheeky nature of the character while making it uniquely his own with his signature “boop and woo-hoo” sound effects. Living in the nefarious shadow of Captain James Hook (David Bosley-Reynolds) James pours a great deal of comic effort into his moments and creeps effectively along like a silly sidekick to a proper rapscallion.

Bosley-Reynolds, as both the nasty Hook and rather annoyed Mr. Darling, gives an impressive performance in the roles, keeping both characters similar enough to keep J.M. Barrie’s intentions behind their original dual casting clear. The beautiful irony of Minnick and Orenstein’s casting in this production is making Heather Marie Beck Mrs. Darling as well as the Crocodile. While Beck delivers delicate and dulcet tones with her children during “Tender Shepherd,” she moves slickly across the floor in a glorious crocodile costume chasing Hook about every chance she gets. The humorous inflection and double entendre layered into this casting choice is a blissful nod to the wizened minds of the audience.

Me thinks I see a spark, a gleam, a glimmer of fabulousity in Bosley-Reynolds’ performance of Hook as he toes the line between humorous and heinous, something every actor must carefully consider when playing a villain for large audiences of children. His over-the-top melodramatic delivery of the monologue which happens in and around “Hook’s Waltz” adds a flagrant theatricality to the character, pushing it more to the side of humorous villain, which ultimately serves the overall tone of the production. With an impressive vocal range, as heard in “Hook’s Tango”, “Hook’s Tarantella”, and “Hook’s Waltz”, Bosley-Reynolds showcases his dynamic ability to talk deep and quickly switch into his rich baritone sound.

Youth! Joy! Freedom! Representing the epitome of being a fun little boy forever, MaryKate Brouillet in the show’s title role is as perfect as pixie dust! There is a crisp and refreshing nostalgia in Brouillet’s voice when she starts “Distant Melody”; this number easily showcasing the deeper range of her vocal register sublimely. Soaring through the Darling nursery, Brouillet flies with confidence when hoisted in the aerial rigging, which completes the trifecta of a sensational performance on her behalf. There is an earnest vibrancy in Brouillet’s descriptive moments of song and speech, especially when describing Neverland to Wendy. Really finding the youthful exuberance of Peter Pan with her heart, Brouillet is a shimmering spark of magical enchantment. The belted sustain at the end of “Neverland” is an astonishing showcase of her vocal talent while the confident strutting both physically and vocally during “I Gotta Crow” brings the character’s fiery side to zesty life.

Keep an open mind and suddenly you’ll find Neverland right at Toby’s Dinner Theatre of Columbia. A truly magical experience, this is one you’ll need to book quickly as a great many dates have already filled up and sold out! Second star to the right and straight onto Columbia for your trip to the mesmerizingly magical Neverland!