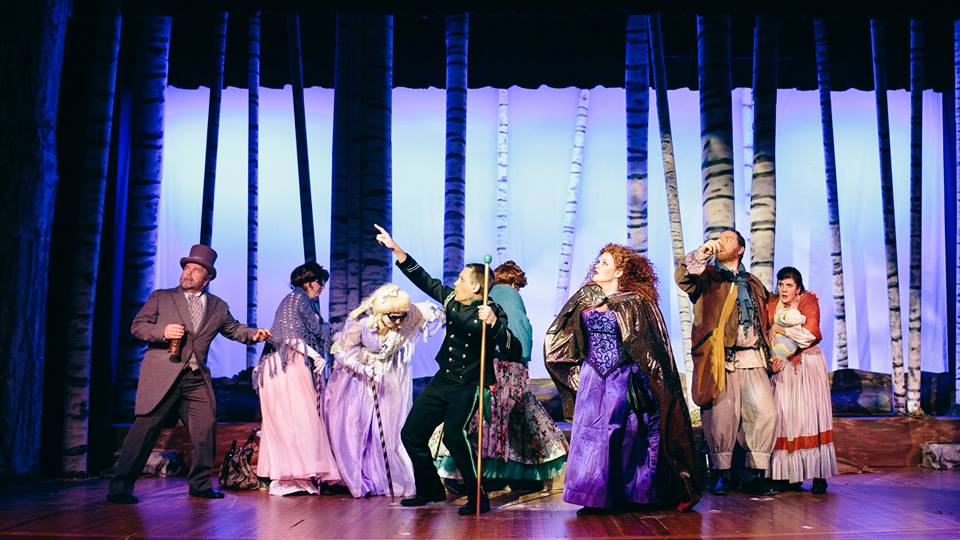 Are you certain what you wish is what you want? What you want is to have a moment in the woods. And that moment can be had at Reisterstown Theatre Project this April as they present Stephen Sondheim’s Into the Woods, but remember that opportunity is not a lengthy visitor and you shall need to move quickly if you wish to go into the woods with RTP for all of the dark and twisted realities that come after “happily ever after.” Directed by Eric Besbris with Musical Direction by Matt Elky and Lynn Graham, there is magic that defies description awaiting you in the woods on the stage at Franklin Middle School this spring. Go to the woods!

Director Eric Besbris takes Reisterstown Theatre Project to the woods in the most simplistic sense. Staying in the original thematic vein of the show, Besbris, and the community army that is RTP, comes together to create a solid foundation upon which impressive vocal talent delivers the darkened and distorted fairytales told only as Stephen Sondheim can tell them. Aiming for the giants in the sky, with a glorious set that fills the stage, costumes that make the characters pop from page to stage, and lights that dazzle the eye, the production on the whole is wildly successful. Despite a hiccup or two here or there in scenic shift and line drops, the performance is impressive and showcases the hard work, dedication, and determined effort put forth by cast, designers, and crew alike.

Besbris, who doubles as the show’s Set Designer and works with Shanie Nelson and Mike Parks, constructs the woods in in tiers to create depth and levels. What’s more impressive than the fairytale forest is the scenic painting (fabricated into existence by a team of some half dozen people involved with the show) that articulates individual scenes like the Baker’s cottage or Cinderella’s house. Of particular note is the red velvet and gold lamè drapery on the triactol for the prince’s palace, giving it a more authentically decadent feel. These scenic splendors look like storybook pages, illustrated in such a way that delights the inner child for young audience members and those who are young at heart.

Costumer Sally Kahn, who works in tandem with Designer Wil E. Crowther, really enhances the fairytale magic of the production with her wildly vibrant costumes. The shimmery sparkle gown that Cinderella wears once her wish is granted is stellar. The same can be said of the witch’s ensemble after her transformation. The dowdier characters, salt of the storybook world as they were, are not without their unique patterns even though Kahn appropriately mutes their color palette so that they appear more ordinary to the eye. Accessorizing Kahn and Crowther’s design work, Hair and Make-up Artists Tiffany and Cameron Consuegra add glimmers of fancy to the overall looks of the characters. This is particularly true of Tiffany Consuegra’s approach to the wigs for the Step-Family.

Lighting Designers Jim Shomo and Bea Lehman are bit overly ambitious at times, mostly when it comes to working with their gobos and motion lights, but their ideas are in the right places. Using the blank white cyc across the back of the woods they create daytime, nighttime, and many times in-between through a shift in colors and hues which saturate the entire scene. Shomo and Lehman work together to craft moods in their lighting design in addition to fixed points in time. This is especially true for “Hello, Little Girl,” “No More,” and “Last Midnight.” Each of the aforementioned numbers receives a flood wash of unique coloring that really sets the tone for the song. Shomo and Lehman’s finest work is perhaps the blue-green-purple rainbows that pierce the cyc during the “midnight gone” sequences, really illuminating the magic of the wise sayings the characters impart during those moments.

Musical Directors Matt Elky and Lynn Graham work exceptionally hard to deliver in earnest the absurdly complex harmonies and rhythms of Sondheim’s score and are consistently successful throughout the production. While the “ensemble numbers” are mainly the opening and closing number, as well as the “Act I Finale,” the work that they have accomplished is readily witnessed in these moments. Elky, who also conducts the orchestra, finds a balance in having a live and exposed orchestra down on the floor and off to the side of the stage against the stage performers in such a way that does not overplay or overpower the vocal talents featured in the show.

The cast is populated with a surge of impressive vocal talent. Lauren Warner, who takes on Cinderella’s Mother, the voice of the Giant, and Granny, has a lovely operatic sound that perfectly carries the more somber notes of her solo featured in the unendingly long “Act I Opening.” Matching Warner’s lyrical ability is Elizabeth Kanner in the role of Jack’s Mother. Smooth, sweet vocals carry her solo segments as well and the pair deserve praise for their brief cameos throughout. Cameron Consuegra, as Rapunzel is a third contender for cameo praise. Though she has no songs specifically denoted as her own, the iconic “wafting lilt of her voice” oft heard throughout the performance is cherubic and mellifluous.

Other harmonizing performers of noteworthiness include the Toll Family— Jennifer and Laura (as Laura Toll Marchiano) as Florinda and Lucinda respectively— and Heidi as the wicked Stepmother. Both Jennifer and Laura masterfully blend their harmonizing voices during the moments where the step-sisters are featured and Heidi Toll provides strong biting commentary that echoes the comic relief of the Step-Family dynamic. When at first he’s encountered he’s none too serious, but before the show is over he is quite mysterious. Daniel Plante, who plays the mysterious man, brings a certain enigmatic vibrancy to his portrayal of the shady spirit of the woods. Though only singing remotely for a brief verse in “No More,” Plante has a sturdy voice that well intones the emotional intentions of his portion of the song.

Two precocious youngsters bring elated energies to the performance as Jack (Noah Maenner) and Little Red Riding Hood (Gabrielle Gilbert.) Both Gilbert and Maenner are fair of voice, like so many in the production, and find an indefatigable exuberance that radiates their characters more fully. This energy carries them through their respective solos, “Giants in the Sky”, where Maenner leaps about with anxious excitement and “I Know Things Now”, where Gilbert grins and bears her new life lessons. The pair are well matched in their childish antics when it comes to “Your Fault” and spouting off at one another whenever their characters encounter each other.

Campiness! Hilarity! They can cut like a knife— right through the darkness that Sondheim has veiled the production in, a tale of two princes never more silly than as they appear in this production. Jim Gerhardt and Kevin D’Alessandro ham-up their encounters for both “Agony” and it’s reprise, making them uproarious duets of comic gold. Gerhardt delivers riveting facial expressions and goes toe to toe with D’Alesandro to try and run away with the song. Featured later with the Baker’s Wife in “Any Moment,” Gerhardt displays his charming cheek and vocal prowess in that duet as well. D’Alesandro doubles as the Wolf, as is traditional casting for the show, and ferociously sets to prowling through this deliciously darkened jazz number. The pair of princes couldn’t be funnier and are vocal delights in their roles respectively.

Winsome, hopeful, and delicately daft, Megan D’Alesandro as Cinderella delivers the perfect dose of ingénue to the character with a truly melodious voice that carries her segments of all the ensemble numbers easily to the ears of the audience. Both “A Very Nice Prince” and “Steps of the Palace” draw into the vague gooey-eyed reality in which Cinderella lives, and D’Alesandro takes root there, letting that sunny and vague notion of true love and dreams populate her songs. Turning a surprisingly dynamic shift of character for “No One is Alone,” D’Alesandro complements the voice of the Baker (Ryan Geiger) quite perfectly in this number.

A truly blissful match of talent, candor, and overall enthusiasm, Ryan Geiger and Barbara Hartzell tackle the role of The Baker and The Baker’s Wife with a convivial familiarity that allows the dynamic of their shifting chemistry to be fully felt and articulated throughout the progression of the show. Both performers possess striking vocal ability which is perfectly matched to both of these roles, particularly when it comes to imbuing emotions into the lyrics. Their duet of “It Takes Two” is the perfect example of how they transition the characters’ inner monologues and intentions as The Baker and his Wife go on a quest through the woods. Hartzell delivers “Moments in the Woods” with the clearest vocal narrative and complimentary facial expressions that exemplify her thoughts on the matter. Geiger’s “No More” is heartfelt and tugs at the tear ducts as he sends the soul of that song sailing out to the audience on a voice smooth as glass.

Channeling some serious saucy attitude of the stage greats before her and blending that ferocity with a surge of personality all her own, Kristen Zwobot masterfully lays claim to the role of the witch and knocks it out of the forest for miles. Rapping her way through her solo in the unending opening, Zwobot delivers each of Sondheim’s lyrics with striking articulation and a great many of the humorous jokes that are so often lost in that segment are heard soundly and enjoyed. A truly heart-wrenching moment is delivered by Zwobot in the second act, serving as the perfect emotional charger to lead into “Witch’s Lament/Stay With Me (Reprise).” Carrying herself with all the tenacity of the enchantress who has it all, Zwobot consistently delivers sassy one-liners, zippy bites that zing, and finds the balance of paying homage to performers like Bernadette Peters while simultaneously making the witch her own. Her rendition of “Last Midnight” as well as “Children Will Listen” ground the witch in a brutal human reality, making her vulnerable while still carrying an electrifyingly enigmatic energy that can only be described as magical.

Though its fearful, though it’s deep, though it’s dark, this is a chance to experience some sensational vocal talent, some stunning visual effects, and some deeply dedicated community theatre artists working to perform Sondheim’s music at its very finest.

She’s Not Good, She’s Not Bad, She’s the Witch: An Interview with Kristen Zwobot for Reisterstown Theatre Project’s Into the Woods

This is Just a Moment in the Woods: An Interview with Director Eric Besbris

Into The Woods at Purple Light Theatre Company
Close