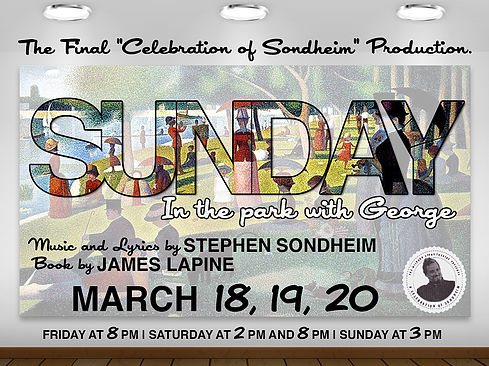 Order. Design. Tension. Symmetry. Composition. Balance. Light. Harmony. And look they made a hat, where there never was a hat. Producing the final production in a “Celebration of Sondheim” festival that spanned the course of nearly two seasons, The Milburn Stone Theatre brings to a close an era of one of musical theatre’s greatest minds by mounting Sunday in the Park with George. With Musical Direction by Dan McTiernan and Production Coordinator John Desmone at the canvas, a truly remarkable and technical-effects ambitious performance alights upon a blank slate for a one-weekend only engagement to put a striking end to the empire of Sondheim created upon the Cecil College auditorium boards over the last 18 months.

Order…Production Coordinator John Desmone brings exactly that to this production with his sharp eye for musical theatre, his well-seasoned directorial hand, and his overall sense of how to transform a story into a spectacular theatrical experience. Blocking performers and framing them throughout the show as if they were but painted images captured in the great portrait of life is but one of the many minutiae which Desmone captures flawlessly throughout the production.

Design…Lindsay Ellis and Paula Diggs Smith lay their fashionably sensitive hands to the cast and fabricate a world of era appropriate costumes, some of which are quite lavish, all of which look picturesque. Ellis and Smith focus on fully saturated colors, which create lively contrasts among the characters. Their true masterpiece is reflected in the upright bustled dress affixed around Dot’s waist, which enables her to step out of it for a lively engaging verse during the seemingly unending opening number. An encore of applause is deserved of these two designers for the subtle yet suitable costume tricks, like the spinning bustle that flips easily around Dot’s waist to highlight a large plot point in the middle of the first act.

Tension…the ensemble performances are ripe with it. The soloists carry it in their discourse and interactions among one another. Roundly filling the complex Sondheim score with soundly triumphant voices, numbers like “Sunday in the Park with George”, “Sunday” and “It’s Hot Up Here” are magnificent echoes transporting the audience to an era when music could be seen in addition to being heard.

Symmetry…a more critical notion could not be unearthed when it comes to the two leads of the show. Artists are bizarre. Fixed. Cold. Why should George (Ben Bouton) be any different? Dot (Lauren Spencer-Harris) is bizarre in her own right. Bouton and Spencer-Harris are matched note for note, personality quirk for personality quirk and deliver a phenomenal performance. Their arguments, their bitter exchanges, the chemistry between them is traversed in perfect symmetry. “Color & Light” is hauntingly beautiful but not quite as striking as “Move On.” This final duet showcases not only their emotional connectivity to the piece and each other, but their tremendous vocal power and gifted sustain.

Spencer-Harris is vivacious, as bright as the colors that pop up insistently throughout the production. Her solos featured frequently throughout company numbers are lively and sprightly and of perfect pitch. Bringing a heartbreaking dynamic sound to “We Do Not Belong Together,” she carries the sorrow of that duet while Bouton carries the gravity and bitterness. Her solo “Children & Art” (in the second act as Marie) is both sweet and forlorn.

Bouton is mesmerizing, first as the aloof George in the late 19th century, and later as the detached and frustrated George of the late 20th century. Though Bouton is vocally consistent and astonishing in both halves of the production— “Finishing the Hat” being one of his more remarkable moments in the first act— it’s “Putting it Together” that really stirs up the emotional turmoil of his character arc. With a rapturous voice and a sensational ability to carry out solid vocal sustains, Bouton wins the audience over with his stellar performance.

Composition…is a necessity when pulling together a Sondheim musical of this magnitude. Musical Director Dan McTiernan accomplishes a great deal of perfectly composed group harmonies, which in any Sondheim musical is no easy feat. Ensuring that cameo players like the Celestes (Amy M. Tucker and Gina Dzielak) hit their counterparts fluidly during “The Day Off” and “The One on the Left” (a trip performed with the Solider, sung with resplendence by William Bryant) is a mark of his talent. Creating a haunting and nostalgic sound on George’s Mother (Justine Quirk) for “Beautiful” a duet shared with George, is another such moment where McTiernan showcases his ability to pull all the right chords into place.

Balance…such heavy-handed musical dramas are often not recollected for their comic moments, but in all things there must be balance. Though appearing only briefly as Mr. (Phil Hansel) and Mrs. (Jen Lee Trone), the obnoxious Americans in Paris, this comic arrival is one to be remembered. Hansel and Trone have highly affected southern accents and their silly little sketch, though only one scene long, is quite memorable. This, much like the rich deep baritone sound featured on the Boatman (Frankie Gillettte) during “The Day Off” and “It’s Hot Up Here” are memorable encounters, if ephemeral ones.

Light…a more ambitious yet surprisingly successful series of lighting effects have yet to be seen on The Milburn Stone Stage than what Lighting Designer Matthew Kator is currently giving to Sunday in the Park with George. Between the projection of the painting that shimmer in and out of existence against the blank white canvases that make up the stage, designed delectably by Artist Bob Denton, and the technicolor blink show that occurs during “Color & Light”, Kator has set out to conquer Olympus with his illuminations and succeeded. The colors that pop to life during the aforementioned song with each quickly hastened textual delivery from George are breathtaking not only in the way they match the lyrics but in their precision accuracy of timing. Visually stunning, Kator’s light plot is an integral part of the show’s success.

Harmony…a thing truly achieved with such visionaries guiding the talent in this production at Milburn Stone. A wondrous way to end an era of Sondheim, preparing with a blank canvas for all the wondrous and new things that will be set forth upon the Milburn Stone Theatre’s stage for seasons to come.

Sunday in the Park with George plays through March 20, 2016 at The Milburn Stone Theatre— 1 Seahawk Drive in North East, MD. For tickets call the box office at 410-287-1037 or purchase them online.

One thought on “Review: Sunday in the Park with George at Milburn Stone Theatre”

Review: A Funny Thing Happened on the Way to the Forum at Milburn Stone Theatre
Close