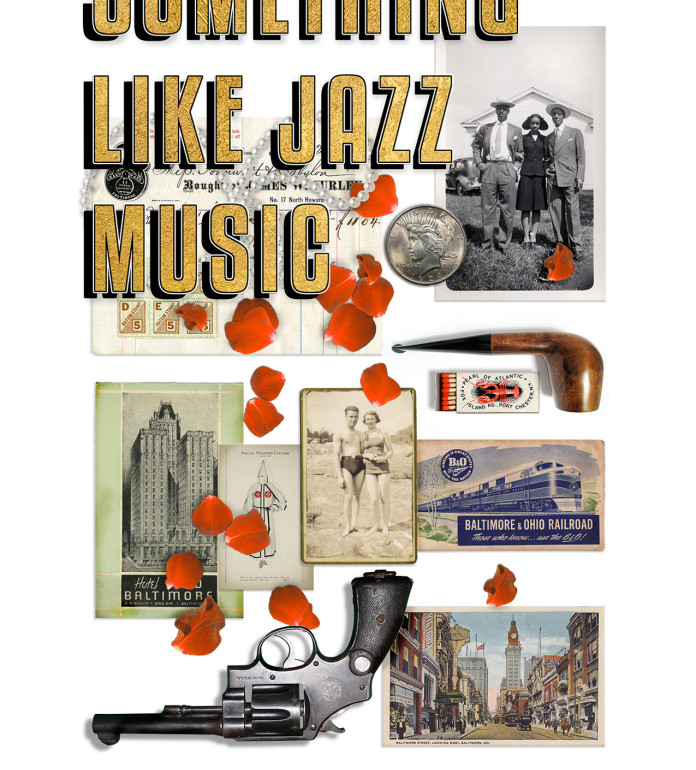 Nothing is our own, not even knowledge and life is far too short to sit at home and fold fitted sheets. Toss down the washing, pick up a tot of gin on your way in, and hotfoot it on over to Single Carrot Theatre for their annual devised ensemble-based work. Written by Genevieve De Mahy, Conceived by Single Carrot Theatre, and Directed by Alix Fenhagen and Steven Krigel, this expressive and movement-based work explores lost stories of the 1920’s locale as filtered through the objects that captured their memories. A curiously evocative piece with great potential for development and growth, Something Like Jazz Music unfolds as emotional dance between timelines where the present reflects upon both the light and darkness of our history.

Setting the show in a modern urban underground, Scenic Designer Allison Campbell constructs a table-tennis arena for viewing on two levels in the house. The play space’s scenic elements are simple, an underground warehouse of sorts of throughway tunnels and little else to delineate location. Campbell’s simplicity is filled in by Projection Designer Steven Krigel, who also serves as the show’s Sound Designer and Co-Director. When shifts in time and place occur, Krigel uses the endcap walls to feature slightly distorted imagery— a quiet sandy beach or a roaring 20’s dance floor inside a Jazz club— and hones in on scenic location in this fashion rather than relying on complex set shifts.

Krigel’s soundscape for the show includes hallmarks of the jazz era, or something like it, when it comes to the rumbles inside the jazz club, the calmness occurring on the beach, and other strange sounds experienced throughout the temporal rifts featured throughout the performance. Augmenting Krigel’s imagery and auditory experiences is the Lighting Design of Mary A. Sykes. Fond of a reflector ball for the scenes that occur in the past, Sykes lets darkness with these spots of floating light illuminate the distinguished path between past and present.

The steamer trunks in all their glory are a great fascinating part of the show. Properties Designer Caitlin Bouxsein brings forth a series of weathered and well-traveled suitcases, trunks, and other bits of luggage belonging to a century of the past. These luggage parcels become an integral connecting staple that bridge the gap between the Single Carrot ensemble performers and the characters that they become both in the play and out of the meta-play within the context of the show. Contained within these valises, which Bouxsein has done an exceptional job of varying in style and size, are the sartorial selections of Costume Designer Heather Jackson. More than just costumes, the vests, trousers, hats, and coats are the secondary connecting cable in this chain-link bond between modern day reality and the 1920’s era that dominates the storyline of the show. Jackson’s work shows a world a dramaturgical research, authenticating the style of the decade in a way that both befits the performers as well as fabricates characters from mere articles of clothing.

Conceptualized by Single Carrot Theatre, with nearly a dozen names attached to the Devising Team, Something Like Jazz Music, has a great deal of potential to be fleshed into a more fully conceptualized piece. The overarching notion that history lost to us can be rediscovered through objects and articles of clothing locked away in trunks and suitcases is a fascinating one. Even the idea that these stories are in a sense like ghosts of the past, seizing and possessing people of the present day to tell their tale, is an intriguing one, but the breakdown comes in the execution and overall flow of the staged presentation. There are too many disjointed moments and separate ideas of which reality is occurring that don’t jive together enough to make a cohesive or fluid piece of theatre.

Choreographer Rebecca Free and Movement Coach Lisi Stoessel infuse the piece with what has come to be known as a hallmark of all the Single Carrot Theatre ensemble devised works. This found movement, which relies heavily on spatial relationships and the viewpoints technique, feels highly appropriate in certain moments of the performance— like the methodical unpacking of the trunks, showcasing the mundane and repetitive nature of the ordinary workday before the contents of the cases reveal themselves to be extraordinary. This moment in particular fits perfectly when the strange clockwork soundscape Krigel crafts under it. There are other moments, however, when Free’s dance movements appear distorted and out of touch with either the present reality of the players or the past reality of the character, and the intention behind whether or not this distortion is purposeful is unclear.

Directors Alix Fenhagen and Steven Krigel do have a concise vision of everything they want to express within this performance, however, their approach to tying it all together isn’t always as clear. There is a moment quite late in the performance that more readily draws the action of the showcase, the “meta-play” and the overall themes together that if it happened sooner would give a more consistent flow to the show’s overall pacing and progression. Fenhagen and Krigel do an exceptional job, however, of tackling the notions of rediscovered history and the light and darkness therein. The 1920’s wasn’t all jazz music and light-hearted floozy-fun scandals, as evidenced later in the production. Tempering these two faces of history into one production is somewhat of a struggle but the notes they touch upon are riveting, even if the execution lacks fully formed flow.

Fenhagen and Krigel, along with the rest of the Devising and Performing Team, may be undertaking a bit too much in their circle of focus when it comes to the production as a whole. The stories contained within the articles trapped inside these trunks have loose roots in actual history but become somewhat caricaturized and almost faceless in their representation. This is not a bad thing, but a curious one as the piece initially seems to set off with the intent of giving voice to the ghosts of the past. Not without humor or poignant moments peppered liberally throughout, the piece as a whole is an experience worth undertaking.

There are striking moments that linger in the mind’s eye, almost like photographs that have fallen loose of the album that is the entire show. Ensemble performer Lauren Sanders has a strikingly beautiful moment of dance, conceived through Free’s suggestive choreography, with a ghost of a man. The basic effect used to achieve this moment is brilliant and chimerical, an utterly charming and touching execution with an aesthetic most pleasing. This moment, like so many of the little moments comprise a collage of broken history throughout the piece, and if one is able to draw connections between these moments with the movement and other design elements woven into the evening, then there is a great deal to be experienced.

Ensemble performer Christopher Dews attaches to the character of Samuel, who is threaded throughout multiple instances of 1920’s history, but none quite so poignant as the interactions shared with the old woman (played by Nancy Linden) on the beach. This scene is emotionally earnest and foreshadows some of the darker elements of history that are less than easy to digest. Dews brings a sprightly and lively spunk to his portrayal as Samuel, a solid compliment against Linden’s more reserved character in that moment.

Ensemble performer Paul Diem is one of the more fascinating characters to watch as it takes his “modern day” persona the longest to adapt to what’s happening in these temporal jumps. Often watching him in moments of silent observation— like when he stands mesmerized, gawking at Saunders and Linden as they engage in a scene from the past— draws forth a sense of awe. Diem’s approach to those moments almost serve as a reflection of the audience, the disbelief and wonder one might experience when seeing scenes of the past reconstruct right before the eyes.

While five of the six ensemble performers spend nearly every moment on stage, including Samuel Dumarque Wright as the gin-joint-jazz boss in the bigger group flashbacks, it’s Dustin C.T. Morris who doesn’t appear until well past the midway point of the show. There is something unsettling about the dynamic shift that his character’s arrival brings to the performance, but not necessarily in an off-putting fashion. Morris moves in unison with the rest during those moments of highly stylized mobile exploration, as if he were a part of the action all along, just lingering unseen.

On the whole, the production is a unique experience, a disjointed step in and out of time. Worth exploring, worth experiencing, and the after-effect that one walks away with will surely vary as this sort of show speaks to the individual in addition to the masses.