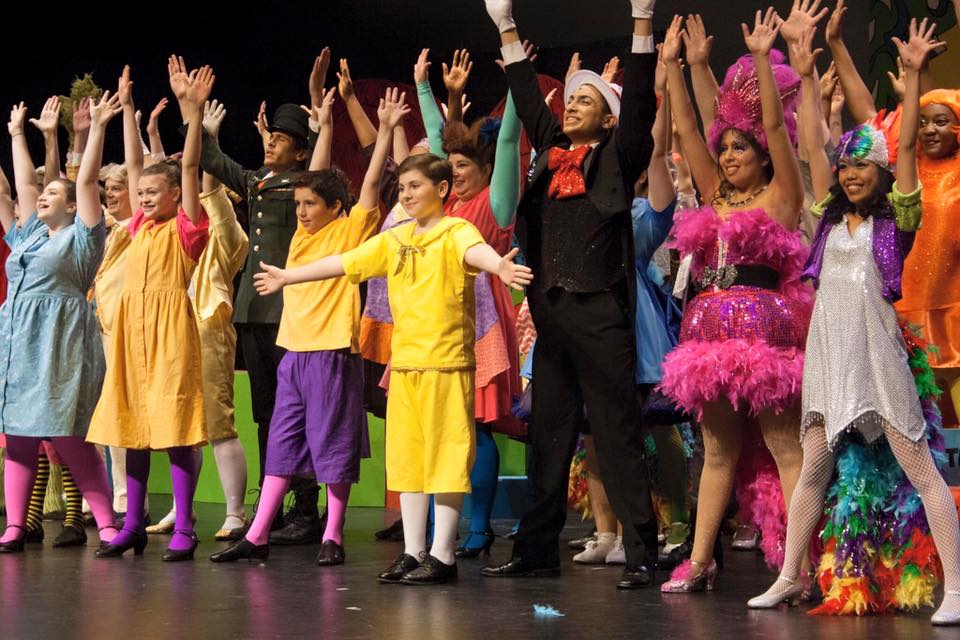 Dearest Reader, an adventure awaits you— both bold and daring!

But with effort abound, tons of creativity and caring

A spectacular spectacle, and you must doubt those naysayers,

It’s all been done before, it’s been done too many times

Why that musical about Seuss with all of its rhymes!

But I’m telling you this, and I’m truer than true

That this production is different, it’s practically new!

Settled into their new home, CCP at Mercy High School,

With glimmer and glitz and a radiant glow

You won’t want to miss this Seusstacular show!

It’s only six shows, so to get a ticket, make haste!

You simply can’t miss it, there’s no time to waste!

Why this production of Seussical is practically perfection!

All the tunes in their order, and all the melodies in place

Why they’ve even got harmonies that float mellifluously through space!

And I must take a moment to acknowledge the dancing

So many bodies on stage, it’s practically entrancing!

About coordinating bodies and limbs without fluff.

It’s succinct and sincere, clean cut and quite spiffy

There’s not a dance number that ever feels iffy.

If you glance in the program your eyes will go POP

At just how many people whose names do get top—

Billing, that is when it comes to creation

Of set, props, and costumes, it’s quite a sensation!

To list them all here would be an impossible task

So group praise for all, and in your wonder they can bask

At their whimsical artwork and their fabulous threads

Without which this production surely wouldn’t turn heads

But turn heads it does, especially the clothes and the wigs

To furry costume accoutrements, their outfits are successes!

These costumes are amazing, the crew did them up just right!

The only thing outshining these outfits outstanding

Are the performances given, ovation-worthy, we’re demanding!

From the chorus to the leads, and all performers in-between

It’s a show packed with talent that simply has to be seen!

Where to start? What to say? So many wordful praises

That this here review it could go on for days-es!

There’s Yertle the Turtle, who Chris Fotis does play

And his one-second solo is truly okay

Well, it’s more than okay, but you try finding a rhyme

That fits quite as well in both meaning and time.

Fotis doubles his role as a Wickersham Brother

And he’s dancing with sass, much like the two others

And those three put together, do seriously gleam

With sparkle and panache all across their dance moves

Tiemann even busts out with some fierce vocal grooves.

For “Monkey Around” his solo is heard

But the Wickersham Brothers aren’t the only cool cats

Too many to list, all those Who’s and their hats

Okay, they don’t actually wear hats, they tease their hair up quite high

But they’re awesome to look at and listen to, here’s why

They all sing on pitch, and deliver a great sound

And there definitely needs to be much more of that going around.

Like our Grinch, Thomas Ogar, who gets a solo quite brief

Delivers great sounds in green, why, what a relief!

Then there’s The Mayor, Jeff Baker, and his Wife

Played by Christina Napp, without difficulty or strife.

Their duet, “How to Raise a Child” is Seussically delightful

The way Napp channels Jackie-O, is something quite frightful.

Her look, all in yellow, with her patented wave

Is a little inside head-nod, for us adults who behave.

And let us not forget General Gengis Kahn Schmitz

Whose character is truly, quite really the pits!

But the actor, John A. Gurtshaw, has quite a fine penchant

For barking and biting in his robust German accent

Okay, I’ll admit, that last line wasn’t quite so rhyming

But I’m doing my best here, to at least fit the timing.

Moving on from the Butter-Side-Up Battling Who

It’s time to laud praise on a seriously Sour Kangaroo

And her character portrayal is perfectly rude!

She shoots down Horton with dramatic diva flare

And her pouchling, a puppet, is too cute to compare

Think of every great stage diva, from Patti to Bette

And the belting personality of Knox is what you’ll get.

Strutting her stuff she makes no bones about

Just how fantastic she is, and how she loves to go all out.

With a big carrying voice for self-titled solo

You’ll watch on with glee to see just how far she’ll go.

When owning her role, against Miss Gertrude McFuzz

Gutin-Creech is the fanciest bird ever was.

Is extremely talented too, but in a much different vein.

Her character isn’t all loud and stand-outish,

But much more reserved and completely self-doubtish.

Kane’s portrayal of Gertrude is heart-warming and earnest

With a tender loving heat that feels quite like a furnace

Coming into her own in both song and character voice

You’ll fall in love with Kane’s Gertrude, there won’t be a choice

Why, true love in her portrayal, what could be more important?

Then there’s Horton, you see, a most determined character indeed

Leave it to James Gilbert, who brings our Horton up to speed.

When it comes to solos and duets, he’s truly sincere

With a heartstring tugging voice, Gilbert makes it quite clear

The emotional intentions of Horton, he echoes through all,

A person’s a person, no matter how small.

A tear comes to the eye, as their sing through their verse.

Dubel has a voice that’s sugary sweet and serene

He’s angelic, cherubic, if you get what I mean.

When it comes to thinking up thinks such as these.

Why that ridiculous, Seussical menace The Cat in the Hat!

Played by Joseph Haddad with enthusiasm and cheer

With all his energy we’re quite glad he’s here!

He follows his hunches, and makes a great show

Just one of one hundred reasons you must go!

To see Seussical! The Musical with this phenomenal cast.

And I almost forgot— how could I forget?

The cutest little cast member to be debuted as of yet!

Little Parker Napp appearing live at the end of the show

An adorable hybrid of precious and too cute

Why if you don’t go see him, we’re giving you the boot!

It’s an ephemeral event, that’s not going to last!

So go one, go all! Quickly now, don’t be naysayers!

You must catch this show at the Charm City Players!

Seussical! The Musical plays through March 20, 2016 at the Charm City Players now in residence at Mercy High School in the Harry and Jeanette Weinberg Auditorium— 1300 E. Northern Parkway in Baltimore, MD. To purchase tickets call the box office at (410) 472-4737 or purchase them online.