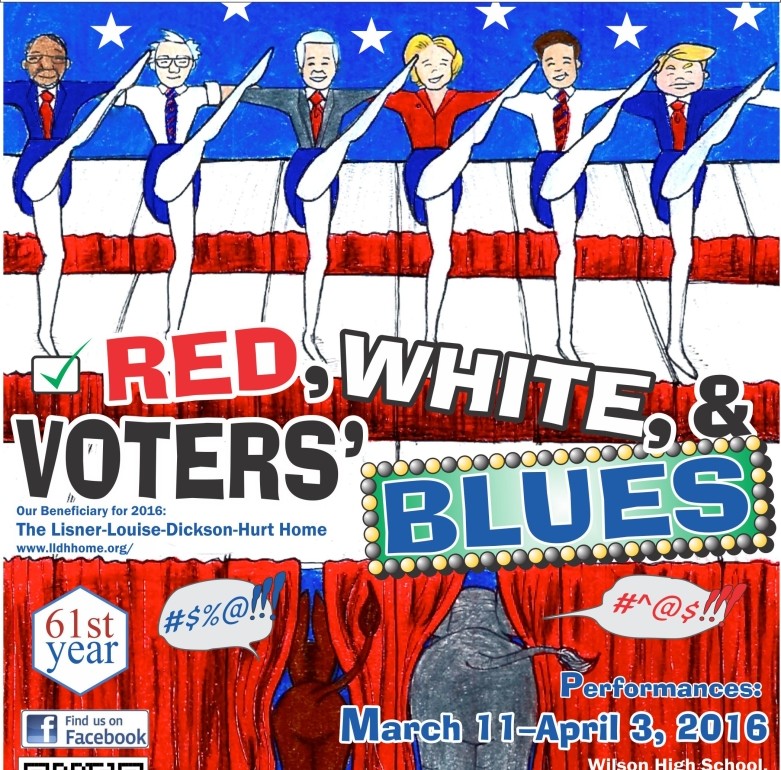 Are you feeling overwhelmed by all of the *super* choices in this year’s upcoming presidential election? Will 2016 be the year that America finally brings an apocalypse down upon its own head with what has made it to the near-final rounds of voting time? Are you ready to feel the Bern? Or Trump the competition with ludicrous violence? Which Hillary will you be voting for? Are you ready to make America great again? If you are, you know the only way to do so is to procure a ticket to the 61st Annual production being put on by Hexagon: Washington’s only original political satirical musical comedy revue! This year they’re pulling out all the stops with Red, White, and Voters’ Blues, a perfect and appropriately themed musical comedy revue given that we’re in the dodgiest election year yet to be in history! Spearheaded by Artistic Director Malcolm Edwards and his merry band of writers (for a complete contributing list, see the website) are at it again and they’re bringing the hilarity, the humor, the satire, and the offenses— to everyone— this year! A remarkable band of volunteers takes to the stage for a good night of “laugh-away-your-political-troubles” and it’s what everyone needs after the deluge of delirium that’s flooding the news, social media, and conversations everywhere relating to the upcoming elections.

With a production team far too numerous to list individually, the massive group of individuals that come together to pull off such an impressive and well-thought out original show are deserving of far more praise than one could ever give in print. Edwards and the Writers comes together to keep the material topical, poignant and entertaining. Each evening features a different set of “celebrity” Newsbreak hosts (at the Saturday 3/12 performance it was Joel D. Smith of CBS21, and Katelyn Smith of WGAL Channel 8) who intersperse the evening’s musical numbers and comedic sketches with “action-style updates” that read with welcomed amusement to the audience. In addition to laying a heavy hand on the humorous hot-topics, Edwards and the Writing Team pen a beautifully serious number, “Brown Water Blues.” This number, which focuses on the water situation in Flint, Michigan, and closes with the profound “black lives matter” statement, is the perfect reminder that while politics and current events are ripe for the picking when it comes to spoof and satire that there is always a message to take away from such an event.

In addition to Edwards and the Writing team, the production team— lead by Producer Willy LaHood, Technical Director Peter Nerenstone and Musical Director Brock Holmes— come together to ensure that everything works itself out under the heat of the limelight in front of a live audience. Costume Credit, at least as far as design goes, falls to the capable hands of Linda Wilson and Jamie Breckenridge, and a nod is also deserved to Ivan Davila for the show’s choreographic work, at the very least, the amazing kick-line. Without the incredible talents of this literal army of volunteers, such fantastical entertainment would not be possible.

The cast is populated with some impressive impersonators. Producer LaHood even joins the ranks of the performers during a number called “Feel the Bern” wherein he poses as Bernie Sanders and throws down the strongest of throwdowns with his go-go 80’s style back-up dancers in a routine that is not unlike a “sweatin’ to the oldies” style feature. Featured alongside him in this number are Kandace Foreman, Jamie Sinks, Kathleen Suydam, and Roxanne Waite, all of whom appear throughout the production numerous times in other sketches and songs. Suydam is one of a trio of featured singers for “Brown Water Blues,” lining up with Genean Hines and Karen Padone to belt a soulful sound into this serious number. This trio of women has no trouble showcasing their vocal prowess in this penultimate musical number and their sound resonates fiercely when they do.

Other impressive impersonators include Susan Dye, the show’s “main” Hillary. Libby Dasbach also takes up the role of Hillary, though only for the “Democrat Debate” wherein the raps are thrown down (just like they are in the “Republican Debate”) and this is really the only point wherein the performers seem to have just a hint of struggle in their show— but hey, rapping, much like politics, is hard! Dye, who sings “Homesick Hillary” delivers a hilarious rendition of this number and having both her and Dasbach playing the former First Lady is a perfect nod to the “#whichhillary” hashtag that has arisen as of late.

Topical but less political numbers that really catch the audience’s attention include “Fit Bit Misfit” which features Elizabeth Griffett, Chinwe Nwosu, and Jamie Sinks lamenting the love and hate relationship we all share with our Fitbits, “I Love My Phone” a number featuring Nicholas Michael Bashour, Ellen Kaplan, and Robert Teachout as they mock the over-addiction of today’s society to their smartphones, and “Living in the Drone Age”, an ensemble number that addresses drones of all shapes and sizes.

Bashour, who appears in multiple songs and sketches throughout the performance, is a comic front-man, appearing as Cruz in “Republican Debate”, one of the two hysterical queens featured in the sketch “Minutes of the Log Cabin Republicans” (opposite Blake Grobe), and as Cap’n America in “Super Pack” possibly one of the funniest sketches in the set. Grobe, who also appears in this sketch of super heroes, as The Hulk, appears in several of the numbers and sketches as well. Both Bashour and Grobe have a sharp sense of comic timing and delivery, as well as impeccable stage presence. Be on the lookout for Steve Dasbach as well, who shows up as Iron Man in this acclaimed sketch, but who also delivers a revoltingly accurate impersonation of the Voldemort of our times in “Republican Debate”. Dasbach’s Trump is as repugnant as the man himself, or damn close.

The number that really seizes the audience by storm is the much anticipated “The 61 Swing” closing out the first act with a series of impressive shuffle-stepped old-Vaudeville-inspired dance routines, ten of the company’s finest females take to dazzling glittery outfits and perform a great series of kick-lines to welcome the audience into intermission. On par with some of the finer dancing routines witnessed on local stages, these women strut their stuff and really wow the audience with their ability to kick together, high-legged and fully in-time.

A truly enjoyable evening, especially when the rest of the world seems intent on cannibalizing itself over smear-campaigns and political disasters, Hexagon’s Red, White, & Voters’ Blues is the way to go this election season! Vote yes for a ticket to this enjoyable program!

Review: The Spoof, The Whole Spoof, and Nothing but The Spoof at Hexagon

The Spoof! An Interview with Hexagon Director Malcolm Edwards

Women of the Blues at Creative Cauldron by Amanda Gunther