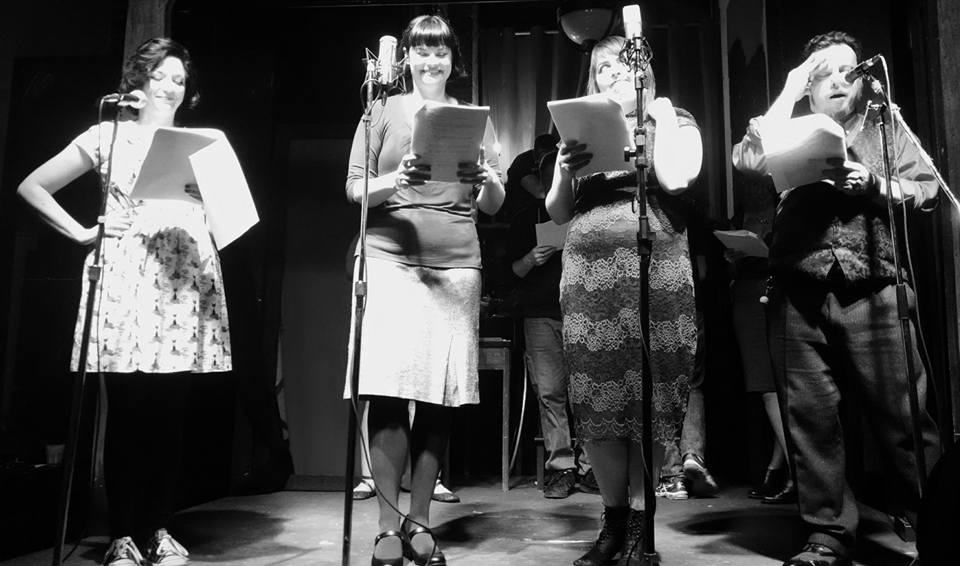 We now interrupt your regularly scheduled Thursday evening programing to bring you the March installment of Horatio Dark’s Between the Lines. Brought to you by Truth Dollars, the only way to fight communism behind the iron fence, this week’s monthly broadcast has temporarily relocated from its regularly scheduled Monday night time slot to a terrifying Thursday evening. Just what has old Horatio concocted in his lab that has the show traveling about through the nights of the week? Why, just keeping things flesh fresh, of course. WYST, the radio station proudly beaming its signal out from the stages of The Yellow Sign Theatre plays host to a whole slew of new things this evening— including a new radio announcer, temporary new voice of the show’s beloved host (even radio hosts occasionally fall ill), and two new script writers. With three non-sequiturs, and one installment of the ever-popular Bennington Marcus Mysteries, this month’s Between the Lines will as always, bring you to the edge of your seats and provide hours of entertainment, but only if you’re ready to follow the master of the macabre, the antiquarian of the insane, the navigator of the netherworld as he dares to go— between the lines!

Proving once again that his creativity knows no bounds, Master of the Foley Dave Marcoot sets the soundscape into motion for the evening’s entertainment. With the aid of Foley Assistant Eidhnean Illuviel, Marcoot smartly and sharply supplies sound effect after sound effect in live time continuously throughout the program, making what the audience experiences that much more engaging. After all, this is a radio play, and it would not be complete without the perfect that resonates out of the Foley Deck, elevated just off the back of the main stage. Marcoot and Illuviel’s effect work is particularly on point this month, nearly every cue happening with precision timing. Everything from footsteps of all varieties (and there seems to be quite a bit of fancy footwork involved across the scripts this month) to the show-winner “tightening-a-corset”, the Foley Artists are working their magic to new frenzied heights.

Switching up the role of Radio Announcer, Aaron Travis takes to the mic and delivers show introductions and advertisement breaks with gumption. There is a certain je ne se quoi to his reading of the “Truth Dollars Fight Communism” ads, a regular script addition that the audience is more than fond of. In a surprise turn of events (and everyone wishes Jon Freedlander’s voice a speedy recovery) Chris Allen has stepped into the role of radio personality and the show’s host, Horatio Dark. Delivering a ghoulishly spooky sound not dissimilar from that which Freedlander has created, Allen does a remarkable job hopping into the role on just an hour’s notice. His quirky delivery leaves the audience tittering at the puns mish-moshed into the intros and lead-outs of each script.

With the nature of live theatre being unpredictable at best, the shift in performance evening left the show missing several of its regular performers, which resulted in no airing of a new installment for the humorous serial Rex Pylon and Dot Planet Tripper Adventures. In its place the audience received a third non-sequitur, still penned by the crafty Horatio Dark, as well as the debut of two new writers with non-sequiturs of their own. In addition to all the shuffling and shifting, and exciting new debuts of new works by new authors, Chrome: The Bennington Marcus Mysteries, brings a new installment, for those addicted to the series.

Making her Horatio Dark writer’s debut, Emily Ward brings a twisted tale to the stage involving love, psychology, and a swamp creature? Deliciously devious and penned with a romantic flourish that waxes nostalgic toward the June Cleaver carefully carved lifestyle, Ward’s work is simple and earnest in its existence. Her handle on the mid 50’s lingual terminology is just swell, throwing in words like “necking” and “golly” in just the right places, particularly when it comes to Dorothy’s dialogue exchanges. Dorothy, (as read by Liz Christmas with a cute as cream 50’s punch in the delivery) as the best friend and moral support to the show’s protagonist, Joan (Jess Rivera), there is quite a lot of positivity to be found in her speeches.

Rivera delivers her lines like a girl stuck with love, confessing it to her most intimate diary when it comes to encountering what she knows is the real McCoy. While Miriam Doyle, as the nefarious nurse, and Alix Tobey Southwick, as the curmudgeonly old janitor, make great vocal cameos, the show-stealing ham arrives dead center with Michael Stevenson, playing the title character. It’s not even his Sean Connery shenanigans when he delivers his lines but the visual tomfoolery that he gets up to whilst his character is being talked about. Although the show is a radio play, his visual comic gags are received in hysterics by the audience over lines that might otherwise be delivered in plain earnestness when heard on the podcast.

Line of the script: Maude— “…well when you’re Queen of the Swap you’ve got all sorts of state dinners to attend!”

The Spirits Awaken by Shelly Burke

Making her writer’s debut at Between the Lines, Shelly Burke brings The Spirits Awaken to the stage with a vapor of old vaudeville mystically shrouding her clever dialogue and well-placed jokes. Set in a Baltimore theatre, which used to be a Vaudeville house, the ghost tales are growing in this nifty little piece of perfectly crafted writing. Peppered and punctuated with one-liners that really pop, Burke puts her cleverness on display throughout the script, showing her ability to balance humor and momentum as the plot develops. With Lily (read by Christina Green) and Eugenia (Katie Rouse) haunting the establishment as an old vaudeville duo whose act when up in a puff of smoke or a blaze of glory, depending on who’s telling the story, the script gets a great deal of titters and giggles, in addition to being easy to follow and enjoyable.

Green and Rouse are snarky and snappy with one another, effectively capturing the tone of these two Vaudeville partners that Burke has penned into the dialogue. Emily Ward, who plays the “preset day” (read 1937) Caroline has a snazzy handle on that zippy 1930’s patois and patter in her speech delivery as well. The comic antics really get under way, however, when Harold (Todd Gardner) and Mary (Lori Travis) join the crowd and the plot twists unfurl and the humors ripen. This script is also responsible for the best Foley effect of the show, that of a “corset being tightened.”

Line of the script: Lily— “…falling asleep drunk with a lit cigarette in your hand barely constitutes as a ‘blaze of glory’, dear.”

The Music of Chrome: A Bennington Marcus Mystery by John Higgins

Continuing the chronicle of the much beloved Bennington Marcus Mysteries, John Higgins brings eager audiences the very next installment in the series, The Music of Chrome. Set at the Diode, a Chrome-Club featured in a previous episode, Marcus (Craig Coletta) and Theo16 (Jeffrey Gangwisch) encounter a brand new character while revisiting several familiar faces along this case trying to find “The Can Opener” also known as Giddeon66 (Chaz Kedesla.) Higgins’s natural talent for capturing the ephemeral essence of film noir in his scripts is as ever palpable and present. The narrative overhang delivered by Coletta delves deep into the vernacular and street slang with crisp clarity, particularly in the elevator ride back down from Marshall37’s 13th story apartment. Higgins captures the epitome of a descriptive scene when Marcus drinks in the wall of jazz musicians in said apartment. Juxtaposed against Coletta’s smoky vocals that moment is sublime. All in all, this particularly ominous episode leaves the audience sitting with an uneasy sense of foreboding about what may come with future encounters of the Giddeon66 character.

Coletta and Gangwisch tag-team tempers and humors in this episode, as per usual, though there is a much heavier hand of nasty flare-ups this go-round. Michael Stevenson reprises his recent role as Kirby26, the quirky and somewhat spastic bartender at the Diode jazz club. Lori Travis reprises her recurring role as Doctor Page, but it’s series regular John Bennett, the bombastic blasting chief, who steals the thunder this episode. Though he’s only got four lines featured at the end of the story, his explosive temper really revs up the audience with frightening ferocity. Narobi Collins also deserves a nod for his off-the-wall delivery of Lenny in the elevator ride up to Marshall37’s apartment.

Line of the script: The Chief— “…this police report has more feathers than a Pegasus farm!”

With the absence of title performers for Rex Pylon and Dot Planet Tripper Adventures, Horatio Dark has submitted a non-sequitur of his own into the mix. A classic Twilight Zone style twisted tale of darkness, Framed Life features an ordinary family of four. Picture it if you will, a mother named Gertrude or Trudy (Maddie Rogers Croy), a father called Ben (Chaz Kedesla) and their two perfect children, Martha (Christina Green) and Ben Jr. (Eddie Lee III.) Featuring the most footsteps and feet-moving sound effects of the evening (and perhaps ever), Horatio Dark’s script builds with suspense as Gertrude’s idea of the perfect family picture unravels right before the very ears of the listeners.

With Croy delivering a perfectly Stepford housewife and mother character it hardly seems as if anything could go wrong inside her picture-perfect family life. That is, of course, until it does. One by one family members start…disappearing. And all she wanted was to hang her favorite family picture and serve a good family dinner! Is that too much to ask? Eddie Lee III steals the script (second only to the Marcoot and Illuviel’s foley work with the moving feet) with his cheeky overtone and affected accent.

Line of the script: Gertrude— “…he’s leader of the glee club, and the gun club. He’s got potential!”

March’s broadcast may have hit some pre-air bumps what with the temporary voice replacements, Rex & Dot in absentia, and the inevitable night shift to Thursday, but it proved to be just as much of a success and fun as any ordinarily scheduled Monday night broadcast has been. Be on the lookout via the Facebook page to find out just when the April broadcast of Horatio Dark will be taking place as it is likely that the date may have to shift off of the last Monday of the month.

Horatio Dark’s Between the Lines was a one-evening event occurring on March 24, 2016 at The Yellow Sign Theatre— 1726 N. Charles Street in the Station North Arts District of Baltimore. Be sure to attend the regularly scheduled Horatio Dark’s Between the Lines on the last Monday of every month starting at 7:00pm. Arrive early as seats fill up quickly.