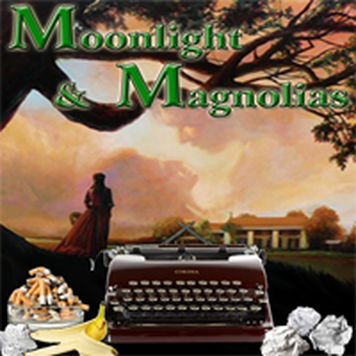 As God is my witness, you shall never be hungry again, at least your comedic appetite will be sated when you turn up to the Audrey Herman Spotlighters Theatre for their first production of 2016, Moonlight & Magnolias. A madcap malady of hilarious proportions Directed by Michael Zemarel, this play is a zany two hour trek across Hollywood’s most manic melodrama, Gone With the Wind. Only in the most truncated and hysterical fashion possible, the 1,037-page, 63-chapter novel is summarily explained to three big tinsel town names in hopes of concocting a screenplay to shoot the infamous film and put a stamp on history the likes of which the silver screen had yet to see. Remarkably well paced with comedic jesting at its prime, Moonlight & Magnolias is setting the bar high for stage comedies for the rest of Baltimore’s theatre scene this year.

While Set Designer Tony Colavito’s set (co-created with Director Michael Zemarel) is somewhat lacking in creativity and period appropriate authenticity, there is a warmth that settles over the space in the overall floorplan of the furnishings. Colavito and Zemarel make good use of the unique stage space at Spotlighters, and Zemarel blocks the show accordingly, which makes up for the lack of inspiring interior design. Costume Designer Suzanne Pratt picks up the slack in the design department to hone in on the 1939 golden era of Hollywood. Pratt’s full-line dress for Miss Poppenghul capture the essence of female fashions for the time period, and Pratt’s approach to the suits and suspenders for the menfolk is spot on as well.

Zemarel has a keen understanding of how to move the show’s pacing along consistently, though the first scene of the second act takes a bit longer to regain momentum after the intermission. His ability to work honesty into the comedy of the show is one that serves the play’s context a great justice. There are moments, however, that feel somewhat shortchanged when it comes to achieving the full comedic potential. Moments like the peanut-slinging chaos and the fact that Fleming bursts a blood vessel in his eye from an extremely strained bowel movement (an initial moment that you will only catch if you’re familiar with the show) feel glossed over and rushed through, lingering in the scene with unactuated potential. That said, Zemarel unearths rich layers of honesty in the comedy that is readily threaded throughout the material, allowing the actors to fully live in the moments with one another once the real chaos ensues.

Hats off to Fight Choreographer Larry Malkus who infuses the performance with panache when it comes to striking slaps and packing punches. Malkus takes the moments of chaotic violence and showcases them in true slapstick style, paying homage to the movie fight-style of the time while still creating believable and clean comedy in the execution. The “slap-scene” work is particularly priceless as the three men descend into madness laying into one another under Malkus’ guidance, the result of which is one of the funniest scenes in the play.

Rachel Roth holds her own in a four character cast as the only female among the big boys. With spastically animated facial expressions that are even more melodramatic than the soap opera nature of Gone with the Wind, Roth’s silent and reactionary responses to certain orders from Selznick are sheer entertainment. Delivering an over-the-top caricature of a late 1930’s working secretary, Roth milks her moments on the stage in the spotlight, knowing she only has a few of them. Determined to get her 15 seconds of fame, the elated jubilation that arrives in her final “Yes, Mr. Selznick,” in addition to her crackpot momentary meltdown are two magnificent moments that truly take the cake of her character.

Tony Colavito takes on the role of Victor Fleming, the big shot Hollywood Director and makes for a strong foil against David Shoemaker’s interpretation of Ben Hecht, a spitfire screenwriter of the time. Though Zemarel’s direction and blocking often has these two actors squaring off face to face in an intimacy bubble that feels like it’s going to take the fight in a very different direction, the pair of performers bristles well together and has a fine-tuned knack for delving under each other’s skin. Colavito affects an accent, as does Shoemaker, that it well suited for the character and adds a rough edge of ‘old school Hollywood’ sound to the performance. There are moments, however, when Colavito drops down into a lowered energy and speed of textual delivery, which are appropriate for the overall progression of the scenes, but these moments also drop his volume and despite the intimacy of the space, make him difficult to hear.

Shoemaker is not the comedic heavy in this production, though he is not without his own hilarious merit when it comes to lively reactions and responses. The consistently burbling sarcasm that underscores much of his delivery worms its way into a cozy niche of comedy and settles in against Selznick’s melodramatic existence and Fleming’s antagonizing one. The state of sheer dishevelment that the characters find themselves in at the top of Act II is best experienced through Shoemaker’s portrayal, a completely disoriented and hilarious series of garbled gestures and grunted sounds.

Thom Eric Sinn carries a great deal of the show on his broad shoulders, really taking proud ownership of the absurd theatrics which fall naturally to the character of David O. Selznick. Starting off at a questionably high intensity level in the opening scene, Sinn carries this emotional and energetic charge consistently through the performance, surging higher where the script calls for it. Steeped deep in the visceral humors of the whacky melodramatic elements of the text, Sinn even finds a striking and harrowing moment of raw unadulterated emotional honesty during his breakdown. Blasting a bombastic ballsy and domineering attitude throughout the performance, Sinn controls the stage with thunderous force, driving laugh after laugh throughout the evening. A remarkable performance given, by Sinn as well as his two stage cohorts, results in the best retelling of an American classic seen on the stage in Baltimore in quite some time.

Frankly, my dears, I don’t give a damn about what else you see this January in Baltimore, just as long as you see the Spotlighters production of Moonlight & Magnolias before it closes up shop and finds itself gone with the wind. So get to the theatre, after all, tomorrow is another day.

Moonlight & Magnolias plays through January 31, 2016 at The Audrey Herman Spotlighters Theatre— 817 St. Paul Street in the historic Mount Vernon neighborhood of Baltimore City in Maryland. For tickets call the box office at (410) 752-1225 or purchase them online.