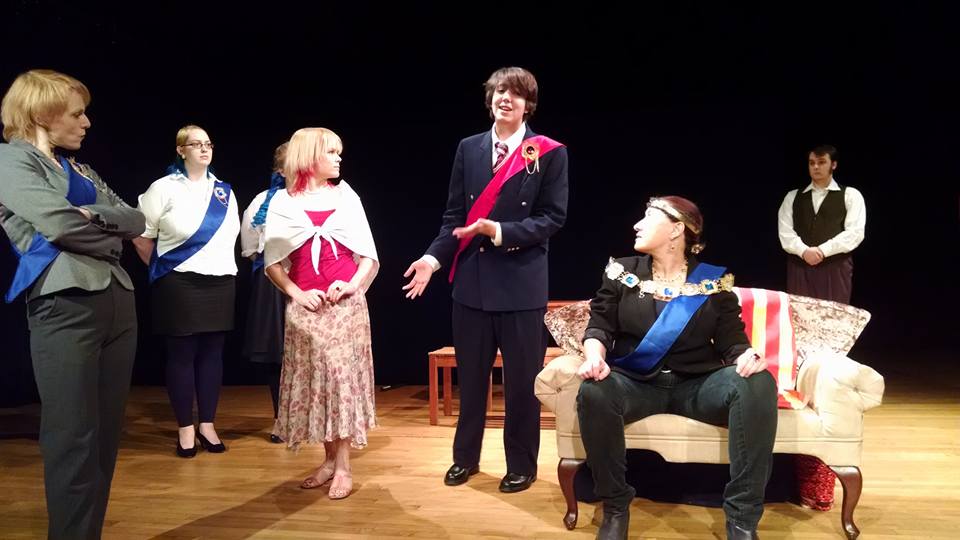 Girl wants boy. Boy wants different girl. Girl tricks boy into wanting her. And they live happily ever after. Other stuff happens. There’s a fool involved somehow. And a king. And a fistula. That the girl magically cures the king of with her magical powers, or her herbs and whatnot. And then they live happily ever after. Also some love letters and a ring. Maybe some secretive identities, a ten-o’clock kidnapping, and a horse? And definitely an Oxford comma. And then FINALLY happily ever after. Except “happily ever after” makes for a really silly title of a comedy and Shakespeare knew it. And so do The Rude Mechanicals. Presenting for your entertainment, a Bard comedy that makes sense and has far fewer plot-holes than most, The Rude Mechanicals proudly prepare for your viewing pleasure a production of All’s Well That Ends Well. Directed by Liana Olear, this quirky little comedy moves well, delights the audience with simple humors and strong performances, and keeps everyone in a feel good mood when it comes to funny stuff and fistulas.

Taking up temporary residence in the black box space of the Howard County Center for the Arts means focusing on simplistic design elements, though this is par for the course for The Rude Mechanicals, who have made a hallmark out of “less is more” except for when it comes to ham and corn in the actual performances. With a few simple set pieces— mainly a throne for the King, a fancy swoopy chaise for Diana and a table for a few other moments— and even simpler props, Set Designer Eric Honour and Props Master Trevor Jones keep with the focus of “focus on the acting” in this production.

Jeff Poretsky does his best with the lighting elements in the bland black box, and although there is nothing particularly noteworthy in his overall design, credit is due because the actors can be seen consistently in the play space throughout the performance. There is, however, a questionably intriguing moment somewhere around the middle of the first act when Parolles is about to be abducted and the lighting creates some fascinating shadows around the character. While not quite indicating the darkness of night it does make for an interesting moment of shadow play between the actor and the other two performers in the scene, who are hiding way downstage behind a sofa.

Sarah Richardson, making her Rude Mechanicals tech-team debut, steps into the role of Costume Designer with confidence and aplomb. Conceptualizing a vision wherein the setting is non-descript and the time is non-applicable, Richardson finds a way to make the costumes pop off of the characters while simultaneously giving merit and identity to the individual without grounding things in any one time zone or geographic location. The most impressive thing to note about Richardson’s work is the color scheme. Bright almost electric blues light up the King and his court, whether it’s the zesty jeweled sash and drapery on the king herself or the blue hair tips dripping out of the Ladies Dumaine (Lynda Clark and Spencer Nelson.) Richardson brings a nice contrast to the blue regality of the royal court by splashing bright red on the Countess. Having a keen eye for smaller detail makes the costume work Richardson provides fit the indeterminate placement of the show on the whole, but keeps the audience impressed with the fashionable couture that arises in its absence.

Making her main-stage directorial debut with the Rudes, Director Liana Olear brings a strong understanding of Shakespeare’s text into play. The moments are executed for truth and the pacing of the show moves swiftly. Olear should also be commended for her ability to edit the script with precision. Presenting a meat and bones version of any of the great comedies and dramas is another Rude Mechanicals signature, one which Olear has lived up to her first time out the gate. Though her blocking for the most part is on point in regards to spatial alignment, there are places where furnishings and settings seem to have too much space between them and at times this creates an unnatural distance between the performers, occurring mainly when two characters are on stage in scene together.

Taking a direct approach to the plot, Olear lets the natural humors of the text surface in her production. Rather than forcing comic shtick or gimmicky bits into the audience faces, Olear works to the truth of the piece and allows the great words of Shakespeare and the solid performances of her actors to do the work for her. There are, however, certain gimmicks that arise in the production— mainly the sight-gag of enormous towering fool and miniscule miniature Lafeu— but rather than shy away from this casting choice, Olear embraces it and by proxy informs the fool’s entire performance around it, making it quite amusing.

Pop-up character like The Widow (Moira Parham) serve their purpose briefly when introduced. Parham has few lines, appearing only late in the show, but fits her deliver to the Bard’s meter with a good working knowledge of how to articulate Shakespearean text. The same can be said of Props Master Trevor Jones, who appears first as the stalwart Stewart and later as the Soldier. There are several moments of highly amusing interaction with Jones and Parolles (Ray Wallis) once the knave has been kidnapped and played the fool. Wallis, making not only their RM debut but their Shakespearean one as well, holds their own in a play of seasoned Shakespearean clowns, finding little moments to call their own, largely in argument with Lafeu.

Showcasing a surprising versatility for a seemingly static character, Sam David delves into the depths of Lafeu vigorously, making a sharp contrast between the furiously frustrated presentation that is delivered when in scenes with Parolles and the idjit Clown (Josh Engel) and her giddy and hopeful sincerity when addressing the King about curing his illness. Watch David’s facial expressions closely, they are her biggest tell and result in a great deal of laughter consistently throughout the performance as they often precede and proceed her lines.

Most fruitfully, Engel is there before his legs in this role with his exaggerated physicality, formed from necessity out of playing opposite of the terrifically tiny Sam David. Leaning and loping, Engel delivers a classic Bard’s fool that leans to the left, leans to the right, and pulls facial expressions that rival David’s throughout the performance. Though lacking in depth, what he misses in textual development he makes up for with his physical shtick and presents a good fool with ridiculous consistency. The comradery shared between Engel and David becomes a sticking point of the play, a fond series of exchanges that really ripen the comedic elements of the performance, if only she could pin his wibbly-wobbly hips still because at times they’re a bit distracting.

The lovely Countess (Lorraine Bouchard) spends a great deal of her scenes wound between the two extremes of delight and woe. Bouchard displays a seasoned flavor of delivering Shakespeare’s text to properly channel the heightened emotions of a classic comedy. Though she shares no direct scenes with Diana (Diana Dzikiewicz)— group scene at the end not withstanding— Bouchard shares similar pensive processes on the stage as Dzikiewicz. The young foiled ingénue takes to the role of Diana with impressive interest. Her teasing of Bertram (Charlie Green) is quite entertaining, particularly when it comes to denying the young heartthrob of what he wants and asks for.

Green, who presents an almost manic presence on the stage in the role of Bertram, is commended for his versatility and dichotomy of the character. Almost creating two Bertrams— one that is well at ease in pursuing the feisty and fiery Dzikiewicz and the other that is fidgety and standoffish in the presence of fair Helena (Grace Baker)— Green goes after the full body experience when it comes to character delivery. Purposefully keeping a two-foot space bubble between himself and Baker every time they initially interact, Green augments the awkwardness between them. Another one that pulls facial expressions like nobody’s business, Green has a reactionary face that does well in scenes of betrayal, frustration, and panic.

Grace Baker is a delight in the principal role of Helena. Sincere, earnest, and genuinely clever, Baker has a flair for delivering raw emotions without saturating her textual delivery in melodramatic moments. Alight with hope when it comes to curing the king, Baker finds balance in her character confrontations, never tipping the scales too far in any one direction. She, like all the performers in the production, need to project her voice just a smidge more so that her lovely line delivery is not swallowed in the vastness of the space, but this will arrive in time as they adjust to the new black box setting. Baker has an exceptional handle on the rhyming meter of the dialogue and finds striking ways of delivering her monologue-soliloquys without disrupting the overall tonality of her character.

Stealing the show in spite of her fistulas, Jaki Demarest owns the role of the untitled King with gusto. At times her characterization is larger than life and it is easy to forget that this is not one of the histories about a king but rather about fair Helena pursuing spastic Bertram. Demarest possesses a masculine gait from the way she sits to the way she holds herself upright. Solid, sturdy, and secure on the stage, her moments of outburst are ferocious and fierce, funneling anger and frustration that all royalty recognizes when they don’t get their way. As a guiding force, Demarest surges through each scene she shares with punchy pizzazz that really steps up the overall pacing of the production.

All in all, it can be said that all is well, naturally because it ended well. Solid performances, funny moments, pretty costumes, there is little more than can be asked for when revisiting the basics of one of the Bard’s lesser comedies. A show worth enjoying for the two hours traffic it ties up on the stage, All’s Well That Ends Well serves the Rudes’ mission well, bringing a great group of new talents on and off the stage to the production.

All’s Well That Ends Well plays through January 23, 2016 with The Rude Mechanicals currently playing in the black box theatre of the Howard County Center for the Arts— 8510 High Ridge Road in Ellicott City, MD. Tickets are available for purchase at the door or in advance online.

One thought on “Review: All’s Well That Ends Well at The Rude Mechanicals”

Review: The Life and Death of King John at The Rude Mechanicals
Close