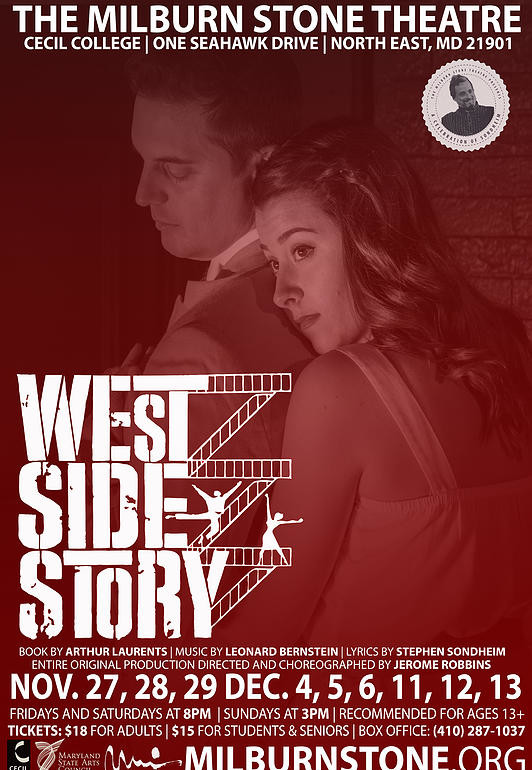 They’re unstoppable. They’ve got magic. They’re in the air. Just like Tony and Maria, Milburn Stone Theatre is flying 12 feet above everyone else as they boldly attempt a production of West Side Story. Known for its dance-intensive approach to musical theatre, this Sondheim-Bernstein adaptation of Shakespeare’s most tragic love story comes to the main stage under the Direction of Bambi Johnson and Musical Direction of Shane Jensen. Jets. Sharks. Milburn Stone has it all just in time to present a refreshing musical alternative to all of the Christmas-themed shows that appear on stages during the holidays.

Applying striking visuals to the proscenium stage, Scenic Designer Bob Denton crafts divinity into the Upper West Side of New York City. Dreary and rundown, it’s the perfect atmosphere for two rival groups of street hooligans to throw down over filthy disgusting turf. Denton uses the entirety of the space, creating Doc’s storefront and Maria’s iconic fire-escape “balcony” as extensions that lead off into the wings. In addition to the eye-popping backdrop with awe-inspiring depth perception in the buildings, Denton’s fly-down chain-link fence is the pièce de résistance of the set. Not only is it a functional fence over which the gang boys scramble and jump but it serves as a barrier between the thinly veiled world of reality and the show, a symbolic bonus in any designer’s book.

While Costume Designer Lindsay Ellis doesn’t have much of a unifying or coordinating theme going on in the costumes of the Jets or their girls, she shows off her costuming talent when it comes to the Sharks and their girls, particularly at the dance. Sharp crisp black tuxedo style suits with vibrant Puerto Rican colored ties and crinoline underskirts to match really give a visual pop to distinguish these fellas and ladies from the Jets in this scene. The organized approach to Sharks and lack thereof in the Jets may be intentional to show a pride of appearance in outward cultures versus the slovenly approach Americans often reflect in their own fashion sense. Ellis’ decision to exclude the expected ‘Jets’ jacket’ is a strange one, especially as the jacket left behind in Maria’s bedroom is no longer as strikingly symbolic once Tony flees and Chino arrives.

Setting the atmosphere of Denton’s brilliant scenic work, Lighting Designer William A. Price III knows how to effectively work dramatic mood lighting without a sense of overkill hanging in the air. Using deep glows of pink and purple to augment the somewhat tense and yet sensual nature of the dance in the school gymnasium, Price’s use of lighting cues and his extensively expressive color palette from on high really encourages an emotional connection from the characters to the colors that light them. Price captures the epitome of the Romeo and Juliet style meeting with the rest of the cast frozen still in a harsh blue light and the young lovers captured in a single innocent white spotlight. This white innocent light is used throughout the production to remind the audience of just how simplistic their desire to be together truly is.

Known for its intense dance routines Director and Bambi Johnson delivers in the choreography and movement department. While the dances may not have the cleanest of execution, the emotional intent and connection to the music is vividly present, as is the complexity and thought which went into designing the intricate routines. Fully spirited and carried out with exceptionally energetic enthusiasm, dance routines dominate the show. Johnson fills the show with dance routines where they are expected, like “America” with her foot-stomping samba-salsa-flamenco combination moves and “Jet Song” which involves a serious amount of diagonal line crosses. Johnson also fills other scenes and numbers with dance routines, fight choreography, and movement that keeps the show hopping on its toes. “Cool” is one of the most impressive numbers choreographed in the show, particularly as Price’s shadow-grow lighting really comes into play here.

For as exceptional as Johnson’s choreography is, her overall direction of the piece raises questions with some of her choices. Choosing a young child performer as the “Somewhere” soloist (at this performance Amelia Moss) is certainly an innovative choice, especially as the girl stands at Maria’s  “balcony” and possibly represents the childlike innocence of Maria’s desire to simply be with Tony. Unfortunately, the young performer, though possessing a sweet voice, is not strong enough to carry the solo and Maria blending in from the far back stage at certain moments of the higher notes in the chorus does not strengthen the song. Johnson’s casting of the male authority figures in the show leaves something to be desired as well. Doc (Phil Hansel) aside, the adults’ portrayals are unmemorable and do not drive home the impact of the antagonizing law force that these characters ought to deliver. To her credit, Johnson does keep the musical moving along, which is a difficult undertaking given the number of scenes that exist awkwardly without lyrical songs.

The ensemble is strong under the guidance of Musical Director Shane Jensen.  The Jets sound stronger than The Sharks when they face off in the song that precedes the rumble scene build-up at the end of the first act, though this may be intentional to show who really possesses the power of the streets. Despite a great deal of microphone balance issues and complications throughout the evening which led to several dropped lines, the overall talent is clearly present and well harmonized with Jensen at the musical helm of the show.

Noted for their accents, Bernardo (Will Bryant) and Chino (Wyatt McManus) keep a consistent Puerto Rican sound throughout their handful of lines when they are delivered. The same can be said of Rosalia (Gina Dzielak) who maintains this accent in her solo feature “America.” Poised with a cheery and undefeatable enthusiasm for this number, Dzielak plays well against the bristly and sarcastic Anita in this song, making for a strong dose of comic goodness late in the first act.

Standout performances go to Action (Alex VanderLek) for his bombastic attitude and ability to consistently showcase it both vocally and physically. Leading the hilarious shenanigans of “Gee, Officer Krupke,” VanderLek finds an amusing way to enact the song while singing through its silly lyrics. His understanding of comic timing make this number work. Gusto and machismo are fully presents in VanderLek’s delivery of the character on the whole and he’s definitely one to keep an eye on.

Smooth leader of the Jets Riff (Joseph Murphy) takes the boys through the show in mercurial style. On the side of whatever Tony believes, until it all goes pear-shaped, Murphy is a slick-rick, smooth-talking natural born leader with an impressive set of pipes. Leading “Cool” as well as “Jet Song” Murphy shows off his impressive sustain and vocal prowess. His character oozes confidence and class while still being mostly levelheaded throughout the performance. Murphy also possesses some pretty impressive dance moves and is worth watching during the dance showdown in the gymnasium.

Anita (Shereen Ahmed) is sassy and filled with that streetwise edge of a hot-blooded Latina. Her accent is strong and carries through both her speaking and singing voice. Barbing with Maria, particularly one her secretive love of Tony is uncovered, Ahmed grounds the character in the reality of their situation. Her true vocal abilities are showcased in the quintet harmonies of “Tonight” a song which features the five major lead characters. But it’s “A Boy Like That”, a duet-tandem song shared with Maria (Darby McLaughlin) that really puts the fire of her soul on display. Fuming through the number, which is matched equally with McLaughlin’s passion of her love in her side of the duet, Ahmed bares the weight of her soul’s concerns in this number.

McLaughlin is a delicate songbird, perfectly suited for the role of Maria and plays the character sweetly, lightly, and close to the breast. This makes for an almost unpalatable transformation of the character by the show’s end, so shocking and jarring are her responses and reactions to the show’s conclusion. With a dulcet voice that wafts away on air for numbers like “I Feel Pretty,” it’s easy to understand why Tony (Art Bookout) would choose this winsome ingénue. The chemistry between them is the epitome of young lovers at first sight. And her duet, “One Hand, One Heart,” is an emotionally stirring ballad that strikes a chord in the hearts of all listening.

Bookout is a sensation, carrying a great deal of the show on his shoulders with his stellar vocal ability and overall conviviality in the role of Tony. Earnest, eager, present, Bookout delivers the triple threat of performance with his fancy footwork, phenomenal vocal work, and engaging acting work. “Something’s Coming” is a surprisingly captivating solo that showcases early on not only his ability to sustain and maintain glorious pitch and heavenly notes but his ability to translate soul-deep emotions in simple words. A true stunner and a knockout in the role, Bookout keeps the audience well invested in the love story.

Worth enjoying for the intense amount of dancing and stellar lead performers, West Side Story will work its way into your stockings this Christmas season as a surprising present from The Milburn Stone Theatre.

West Side Story plays through December 13, 2015 at The Milburn Stone Theatre— 1 Seahawk Drive in North East, MD. For tickets call the box office at 410-287-1037 or purchase them online.

West Side Story at Children’s Playhouse of Maryland