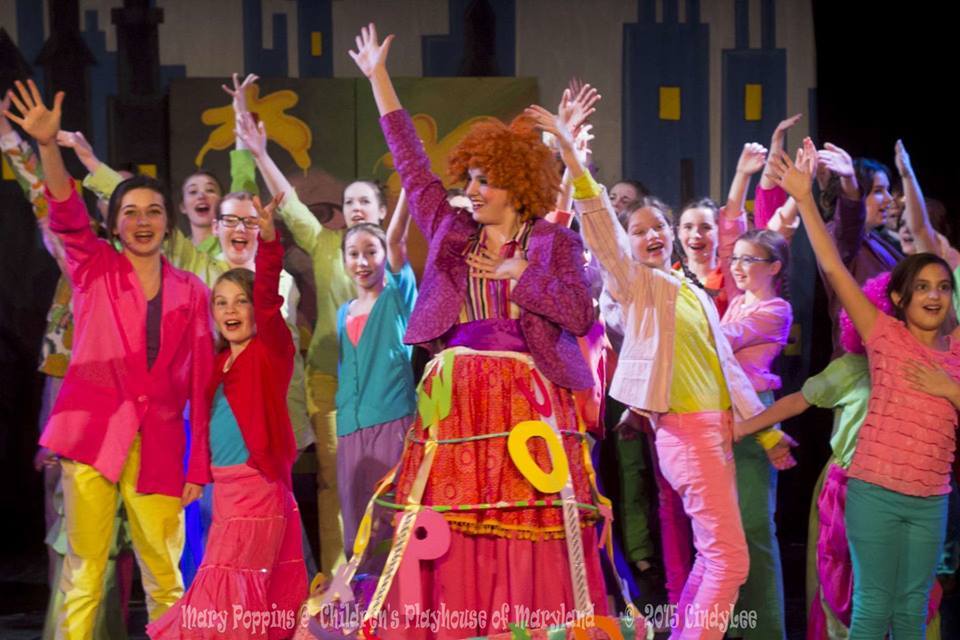 Just a spoonful of sugar is all it takes! And the Children’s Playhouse of Maryland doesn’t just have a spoons— they’ve got the whole bloomin’ bottle of fantastical holiday magic all shaken up and ready to explode all over their audience with their production of Mary Poppins. It’s superb! It’s stupendous! Why, it’s— Supercalifragilisticexpialidocious! Directed by Liz Boyer Hunnicutt with Musical Direction by Sherry Benedek, this marvelous musical features the finest young musical talent this side of Baltimore taking on the Herculean task of a Disney musical. Anything can happen if you let it, and these young performers are letting their magic radiate through this show, resulting in a truly remarkable production.

In every job that must be done there is an element of fun! And the Creative Design team has found all the elements of fun in the designing the various scenic elements of the show and snap— there’s magic abound! Lighting Designer Diane Smith, who doubles up as the Set Designer working with Scenic Artist Laura Miller, work with Director Liz Boyer Hunnicutt to treat the audience to some lovely theatrical treats. Mary Poppins really does soar through the air and Bert goes over the rooftops (compliments of Fly Rigging Masters Ed Lake and Bill Sullivan.) Smith and Hunnicutt keep the set and its mobility simple. Quick changes, all enhanced by Smith’s sharply crafted, cleverly constructed, and succinctly executed lighting cues, move the show along and allow a magical feel to resonate all around. It’s the multi-colored gobos that make the show such a delight and really allow the magical elements of those special moments to flourish.

Costume Coordinator Sharon Byrd adds an additional element of fun to the production finding unique ways to capture the essence of a magical Disney musical, in all of its expected vibrancy, in varying outfits that give the ensemble individual characters for the numbers where it is necessary— like the rainbow romp in Mrs. Corry’s conversation shop— but a sense of uniformity in numbers where such costumes are required— the union look of the sweeps for any scene occurring over the rooftops. Byrd finds clever ways to outfit all of the more whimsical notions of the show— like dancing toys, spinning statuary and of course the great flying nanny herself— in ways that are both familiar to the iconic characters and unique to the present production.

Ain’t it a glorious day when a reviewer can honestly say that choreography in a theatre for young performers is spit-spot? Choreographer Amanda Dickson is stealing the moniker for which Poppins has gained notoriety because her dance routines are practically perfect. While not elaborate, it’s the refreshing simplicity that allows them to be so cleanly executed and this is a welcomed enjoyment for the dance-heavy musical. Dickson understands her cast, their varying talent and experience levels and creates routines accordingly. Featuring well-trained dancers as soloists in bigger numbers while making the ensemble number flashy but basic, Dickson ensures smashing success with her choreography. The enthusiastic energy that permeates numbers like “Supercalifragilisticexpialidocious” and “Step in Time” is simply astonishing!

There are dozens of talented performers that populate this production of Mary Poppins, far too many to name, but standout ensemble members include Kathryn Schudel as Katie Nanna with her practically perfect accent and whining complaints at the top of the show, as well as Allison Mudd as Miss Lark, whose sugary sweet laughter is quickly dashed by her spastic response to her barking dog Willoughby. Matt Byrd, taking on the boisterous role of the Bank Chairman, also gives a good moment worth mentioning when singing during the bank sequence, and Dylan Morrison delivers a charming foreign accent as VonHussler later in that same scene.

Comic crackups Will Foohey and Olivia Aubele take to the roles of Robertson Ay and Mrs. Brill with gusto. Foohey has a surprisingly operatic sound for his solo moment featured during “Spoonful of Sugar” but its his spastic reactions to Aubele as the barking Mrs. Brill that really get the comedy rolling between the pair. Doubling up as Neleus first and Mrs. Corry later, Rachel Miller carves her niche in the edifice of this musical with her remarkable dancer’s ability.  Leaping about with elegant grace as the awakened statue during “Jolly Holiday” and then enthusiastically engaging in the unbelievable gesture-dance of “Supercalifragilisticexpialidocious”, Miller makes a most memorable mark on the production.

A delicate and winsome young lady, Claire Iverson takes to the notion of being Mrs. Banks with a sweet sincerity that levels the character into the audience’s hearts with ease. Her lovely renditions of “Being Mrs. Banks” make for a delightful contrast against the ramrod straight precision and order of Mr. Banks (Nathan Beyer.) An earnest stalwart, Beyer delivers a great deal of his own blasted frustrations in the character, making him a frightful father figure to poor Jane (Madi Heinemann) and Michael (Sammy Jungwirth). Taking control of situations, Beyer shows he’s the sovereign of Cherry Tree Lane with his strong voice in numbers like “A Man Has Dreams.”

Heinemann and Jungwirth are a precocious pair of young performers that fit the bill of adorable children, well almost nearly at any rate. Delivering spiteful moments of tempestuous temper, particularly when mouthing off at Mary Poppins, both Heinemann and Jungwirth show that they can be rather rotten children, earning them quite the song and dance from their toys, led by Valentine (Angela-Marie J. Boeren.) Though they can be quite sweet when it comes down to it, the children certainly don’t deserve the nasty medicine that the holy terror Miss Andrew (Rachel Beyer) brings with her when she comes to Cherry Tree Lane. With a bold voice and a perfectly villainous and pinched sound in her singing of “Brimstone and Treacle,” Beyer lives up to the name long ago ascribed to her character.

All it takes is a spark and Bert (Charlie Holt) has that exact flare and sparkle that really lights up the role. Possessing enough brass for everyone, Holt is magnificent as the silly sod of a sweep who can’t make up his mind as to which profession he prefers. Doffing his cap as a screever, a vagabond, and a chimney sweep, Holt holds a cheery disposition and brilliant facial expressions throughout the performance. His voice is striking, warm and pure, and he maintains a glorious sense of pitch and intonation throughout the many narrative instances of “Chim-Chim-Cher-ee.”  With a solid accent in addition to his exquisite singing voice, numbers like “Step in Time” and “Jolly Holiday” are simply delightful!

Prim and proper and charming and cheeky, Ilyssa Rubin is— as the song suggests— practically perfect to be playing Mary Poppins. Jauntily sauntering with fancy footwork through the show’s many choreographed numbers, Rubin showcases her dancer’s ability, which is as resplendent as her exceptional voice. Singing with a professional quality in her notes, both her sustains and phrasing, numbers like “Feed the Birds” (a duet shared with The Bird Woman played by Autumn Cole) and “Anything Can Happen” are wonderful. Rubin glows with a natural bliss, inspiring the cast around her to possess the joy that such a fantastical show can bring to the stage for everyone watching.

By the time the wind has blown, this brilliant production will have been swept away up the chimney floo! So don’t wait one moment longer to get your tickets to see this exceptional production of Mary Poppins at the Children’s Playhouse of Maryland this holiday season!

Mary Poppins plays through December 20, 2015 at the Children’s Playhouse of Maryland in the Lecture Hall of the Administration Building at the Community College of Baltimore County Essex Campus— 7201 Rossville Boulevard in Baltimore, MD. For tickets call the box office at (443) 840-2426 or purchase them online.

Review: The Addams Family at Children’s Playhouse of Maryland

West Side Story at Children’s Playhouse of Maryland
Close