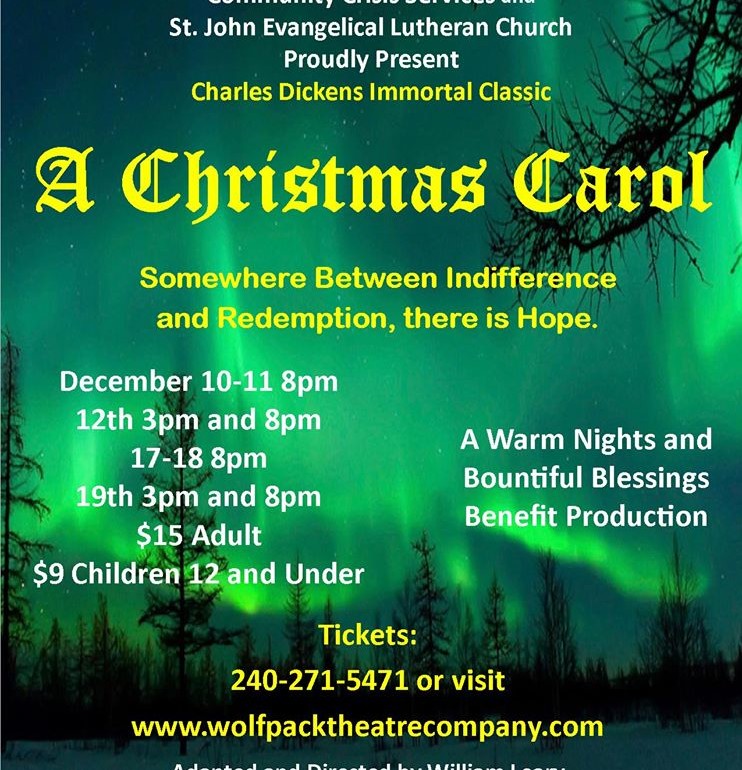 On the second interview of Christmas, Wolf Pack Theatre Company did give to TheatreBloom— the insight of their company’s resident Technical Director Stephen Beitzell! Two blinking lights— quick, Stephen they’re not supposed to blink! And a glowing spotlight on solo singers too! Follow along in the TheatreBloom exclusive series to see what Stephen has to say about his Christmas favorites and his experience with A Christmas Carol

Merry Christmas, Stephen! Thanks for giving us a moment of your time! Will you give us a quick introduction and we’ll get underway with the 12 questions of Christmas?

Stephen Beitzell: My name is Stephen Beitzell and I am doing lights and sound tech for this show, and that’s pretty much what I do with Wolf Pack. This is the second time I’ve done Christmas Carol with them, and I’ve also done Nunsense, and basically every show that Bill (Artistic Director and Company Founder William Dean Leary) has done ever since his first production of Christmas Carol. I guess that makes me their lighting and tech guy. I’m the resident techie. Basically I started buying stuff with Bill’s money and he told me if I was going to do that that I was never allowed to leave. Here I am.

Stephen: Wow. Christmas story? I’ve actually always been fond of— and I don’t know what it’s called— the birth of Jesus, you know the pageants that they do at the church? What’s that called? The Nativity! There we go! Several different churches that I’ve been to over the years have always done different interpretations of it and it’s always fun to watch and see how they end up at the same ending point of the story despite going in all these different directions with their different interpretations. My favorite Christmas movie is A Charlie Brown Christmas. That’s the one I grew up with. Every Christmas on CBS it was Charlie Brown. And I grew up in the era with only five channels. There was no such thing as cable so you actually had to pay attention to when it was going to be on television. And my favorite Christmas song? I really don’t have one. Now, I’m not one of those people that hates Christmas music, but I do have a house rule. No Christmas music until after Thanksgiving. I think the problem is that the Christmas music keeps creeping back sooner and sooner. But I want to have a Thanksgiving! So house rule— no Christmas music before Thanksgiving.

What was the draw to want to be involved with Wolf Pack Theatre Company’s production of A Christmas Carol this year?

Stephen: Well, I’m still buying stuff with Bill’s money. But I actually enjoy doing this stuff. This is all labor of love for me. I do all of this because I love it. I literally stumbled into it back in 2011, tech stuff, that is. I was doing percussion for Company with St. George’s Players. And I was watching the guy doing the lighting and the sound and I kept thinking, “I’d rather be doing that.” I was playing the drums, and I know how to play drums, but the light and sound made me interested. So I volunteered to do sound for their next production. And suddenly people were like “Oh! A sound guy!” And apparently techies are rare and once they’ve found you— everyone wants you. But I love it all. I stumbled into it sideways and I stayed. And Christmas Carol is a great place to keep staying.

What do you think the message is that Wolf Pack’s particularly production of Christmas Carol sends?

Stephen: I think they’re trying to send a message of awareness. It’s an awareness of homelessness and an awareness of hunger. Obviously these are the things you hear them talking about. It rolls directly into the things that Bill does for a living, that was very apparent the first time I worked on the production. He started talking about Warm Nights and then I realized that he works with Warm Nights, and that just makes so much sense. Some of these causes are so amazing and Bill picks them up and runs with them, right into the play. It’s really great.

If you could give Scrooge a Christmas present, what would you give him?

Stephen: I do. I try to, if nothing else for my kids. We put all the decorations up, we put the tree up. We have the old Santa Claus train that belonged to my grandfather so we put that up. Actually, last year the train didn’t go up because we ran out of space, but this year the train is going up if I have to throw a couch out onto the porch. And you know, obviously as you get older some of the magic fades and dies, but my kids are still young enough so I get into it for them.

Stephen: Food? ANYTHING! I’m not real fond of canned cranberries. You know the stuff that comes out of the can looking like a wiggly jiggly log of maroon jello? Not real fond of that, don’t know why. But cranberry chutney? LOVE IT! I had this aunt that would make this cranberry chutney with walnuts and cream cheese and I would just sit there and eat it and get fat on it. My wife will tell you there really aren’t too many foods that I don’t like. I’m real fond of the hams with the cloves in it? And a nice roast beef. All the stuff I’m not supposed to eat.

What has been the most challenging thing for you for this particular run of A Christmas Carol?

Stephen: It’s the fear that I may have over-extended myself. I’m doing tech for this, Winnie The Pooh over at Greenbelt Arts Center, and have myself involved in a few other projects all at the same time. Bill is getting comfortable with the things that I do, so now he’s saying “Let’s do this! And this! And this! And it needs to flash!” He’s adding all of these extra things that we didn’t have before. And whenever he says that, I say “Oh yeah! I can do that! I can make that happen!” And then my brain catches up and says “Oh, no, no, no! I can’t do that! I have to make this other thing happen first!” The show is getting more technical and that’s the big challenge. But it’s good, because it keeps me on my toes and it keeps me going.

What is your favorite Christmas tradition?

Stephen: Don’t think I’ve ever had one. I think the tradition is probably the one that started with my kids. It’s the trains. My son, he’s nine, he loves the trains. He’s nine and my daughter is eleven and my son just loves the Christmas trains. We have my grandfather’s train with the Santa Claus on top and that’s a really neat one to set up and run. I’ll put it on Facebook and all the cousins get all excited because they remember it from when we were all growing up. So I definitely have to get the train back up this year.

If you could have just one thing for Christmas what would you have?

Stephen: Well, you know, peace on earth and all that, but I don’t know. The magic like I said is kind of gone when you’re grown up, so I guess I would want happiness for my children. They’re getting to that age where I know what they’re about to get into because I was that age once. I was a pre-teen once. Of course, I was on the other side of it— causing the problems, so I know what sort of trouble she’s about to get into. I hope for stability and happiness in my kids’ lives.

What is the true meaning of Christmas for you?

Stephen: I am a Christian. I’m Episcopalian, what do they call us? Catholic Lite? So birth of Christ and the whole thing that’s a big thing for me.

Why should people come and see Wolf Pack Theatre Company’s version of A Christmas Carol?

Stephen: It’s a very good version of the show. It’s a show that everybody knows, everybody knows about Scrooge. They’ve got Disney versions, singing versions, Muppet versions— I really like the Muppet version that’s very cool— and then there’s Bill’s version, the Wolf Pack Version. His is there with a different spin on it. It rolls right into the social awareness aspect of it for the local area. That’s one of the things I really like about this production. He’s talking about things we are doing here. So if you saw the show and you wanted to help you could.

12 Gifts of a Wolf Pack Christmas Carol: Day 4 an Interview with Susan Smithers