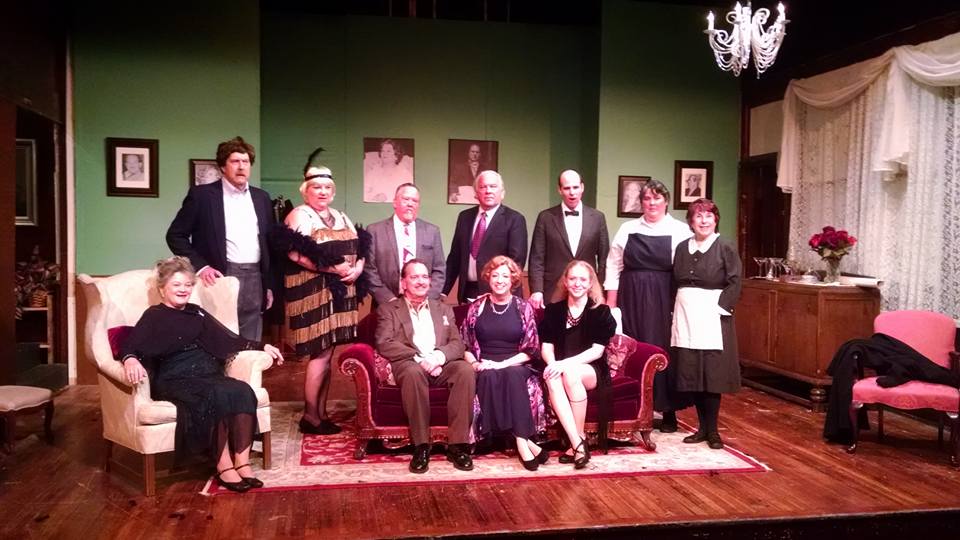 The thrill you get from doing your work is the single most important thing in the world. When the good folks of The Salem Players take to the stage with as much dedication, commitment, love, and enthusiasm as they do for their current production of George S. Kaufman and Edna Ferber’s The Royal Family, it is easy to see that they understand this line of thinking. Directed by John D’Amato, who makes his directorial debut with the comedy in three acts, there is family fun and hilarious hijinks for everyone who ventures out to enjoy the show. The time is 1927, the place is a lavish apartment on the upper east side of New York City, and the family is American royalty. The Cavendish Family, a loosely veiled parody of the notorious Barrymore family, is set to give you a fulfilling evening of madcap hysterics, melodramatic mania, and delightfully touching family ties that bind the straps of the straightjacket.

Director John D’Amato working alongside Tim VanSant, serve as the show’s Set Designers and the posh interior of the Cavendish family apartment comes to fruition in their mind’s eyes (and the thorough construction abilities of Set Constructor Don Schwartz.) The high-rising green paneled walls bedecked in family portraits of themselves echo the vanities of a narcissistically engrossed family of the stage. The furnishings are simple yet elegant, letting the true airs of that breed of aristocracy radiate from the performers. Topping off the room with a crystal and pearl-dripped chandelier, D’Amato and VanSant give the place a fancy coat of regal decadence with little details like the aforementioned lighting fixture.

Matching the scenic savoir fare thread for thread is Costume Designer Trish Morgan. Again relying on simplistic designs rather than overly elaborate ones, Morgan finds the nuances of her costume work that simply scream Broadway Diva, particularly when it comes to the couture of the three main Cavendish women: Fanny, Julie, and Gwen. All draped in lavish silk patterned robes or lovely lacey gowns at one point or another, it’s easy to see where the millions of dollars go every time one of these ladies arrives in a room. Morgan also deserves a nod for finding the absurdly chic costume for Kitty Dean in the final scene of the show, making her look appropriately garish for the Vaudeville moment.

D’Amato keeps the pace rolling along, which is crucial for a successful production of any George S. Kauffman play in the modern day, but especially one where the ripened theatricality of the comedy is tempered by tender moments of sentimentality. D’Amato encourages the larger personalities of the performance to radiate right through with resplendent effect. A few hiccups and bumps are to be expected, especially when you perform a play about a family full of actors, but the comedic timing across the board is thoroughly enjoyable, especially some of the sight-gags which D’Amato works into the scenes— the most memorable coming to mind being the Gomez Addams style sword fight between Jo and Tony Cavendish.

From the moment the show opens the titular chaos is in full swing thanks to Sound Designer Tim VanSant. Back doors buzzing, door bells ringing, house phones ringing, VanSant captures all the antiquated sounds of the time and drags them into a splendidly cacophonous din that’s enough to drive anyone mad, but especially the two household servants, Jo (Fran Huber) and Della (Sue O’Connor.) Both Huber and O’Connor hop to in order to keep the Cavendish household afloat and their comic comings and goings are well-timed.

You might need a map to keep up with all the comings and goings throughout the performance if you’re unable to sit down and take a lesson from Jo and Della. Keep your eye on Kitty Dean (Anita Spicer-Lane) and her grumbly husband Herbert (Ron Zyna) for they spark a great deal of the commotion early on. Spicer-Lane drives the arguments between her and Zyna’s character, never missing a beat when they have to pause to save face and look polite. Spicer-Lane also quips poisonously barbed quills at Zyna’s character, which result in a great deal of humorous moments. With her unique bristling personality it’s a wonder Kitty Dean isn’t actually a Cavendish.

The ingénues arrive in the form of Perry (Todd Shaffer) and Gwen (Heather Goddard) though little miss Gwen is somewhat of a diva. Of course being the daughter and granddaughter of the theatrically inclined Cavendish women, it comes as no shock that Goddard’s character goes through a range of moody emotions throughout the performance. But there will be no time to note the simple squabbles between the pair once daring, dashing, and deranged Tony Cavendish (John Dignam) arrives on the scene. The only male character in the show with as much gusto, hot air, and high spirits, as the uproarious Cavendish females, Dignam digs into his part with verve and zest. His wild temper and raging gestures make him truly hysterical, and his sword-fight scene alone takes the cake when it comes to laughable visual stunts.

Milder men of the show include the dashing and elegant Gilbert Marshall (Richard Manichello), and the cheeky but charming Oscar Wolfe (Scott Graham.) Two completely different men, both with affections in their eyes and hearts for different women in the Cavendish menagerie, Manichello and Graham play to their strengths in this performance. Graham, taking a more comically engaging approach, relies on little facial expressions and witty one-liners to articulate his character’s overall placement in the show. Manichello falls back upon his suave and congenial airs as a true gentleman, serving as a perfect foil opposite the high-strung caricatures written into the show in regards to the leading female roles.

Spastic. Melodramatic. Diva. All words that fit the two leading ladies of the production like a snug velvet glove. Julie Cavendish (Helenmary Ball) and Fanny Cavendish (Carol Conley Evans) are sparky live wires that break the mold, take the cake, and turn out one heck of an entertaining performance when it comes to their moments on stage. Sharing a deeply sentimental connection as well as equally strong passion for performance, Ball and Evans are a true stage knockout. Their moments spent waxing nostalgic over their heyday upon the boards or sharing their sentiments over the future of their careers is truly endearing and utterly delightful to witness.

Evans is a trouper that keeps on trouping. Mastering one of the most sensational moments in the middle of Act II, Evans takes the audience from a moment of sheer unadulterated ecstasy to heart-stopping tragedy in the pause of a breath. A sensational presence, which allows her both mastery of the truthful moments and of the more humorous ones, Evans stakes her claim as actress extraordinaire in innumerable moments throughout the performance. Her handle on sarcasm and quick quips is exceptional, her comedic timing and delivery nothing short of impeccable. Be sure to keep your eyes on her facial expressions, many of which are silent but hysterical and reactionary when it comes to interacting with the other characters.

Ball, as the spoiled and fabulous diva Julie Cavendish, knows how to make an entrance. Every time she sweeps into a room, every breath of air is absorbed by her presence. Larger than life and prepossessing of a natural flair for the dramatic, Ball is a sensation in the role. Her caustic maddened outburst at the end of Act II is brutally hilarious, earning her a great deal of laughter in the process as she spirals out of melodramatic control. Much like her brother (as played by John Dignam) every time her temper rises she flies off the rails like a whirling dervish leaving a blast of chaotic din in her wake. Remarkably engaging and thoroughly entertaining, Ball tempers these outlandish outbursts with truly heartfelt confessions peppered throughout, making her one hell of a loaded pistol when it comes to owning the character of Julie Cavendish.

So there you have it, everything’s grand. A gay romp through three acts of witty family theatrics the likes of which will most certainly make your family seem normal and calm. Do enjoy The Salem Players’ production of The Royal Family, it— much like the love affairs of stage stars— is fleeting and won’t last long upon the stage at all!

The Royal Family plays through November 15, 2015 at The Salem Players— Salem Evangelical Lutheran Church at 905 Frederick Road in Catonsville, MD. For tickets call (410) 747-0720 or purchase them online.