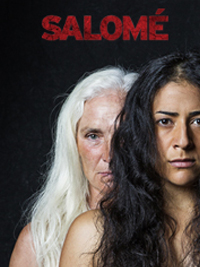 Salomé…seductress? Salomé…femme fatale? Salomé…revolutionary heroine? South African Playwright and director Yaël Farber posits how a nameless young woman mentioned briefly in the Bible as the catalyst for the death of John the Baptist became the femme fatale of Oscar Wilde’s version of the story. By examining the biblical narrative in the context of the conquest of Judea by the Romans, Farber presents a provocative reimagining of this woman’s place in history. The result is a fascinating if flawed look at the oppression of feminine narratives in history and literature.

The Shakespeare Theatre Company, as part of the Women’s Voices Theater Festival, is presenting the world premiere production of Yaël Farber’s Salomé. Farber has chosen to include in her source material ancient Arabic, Hebraic, and Babylonian texts as well as other historical works focused on the time of the Roman occupation. As such she has crafted a more political story than that presented in either the Bible or by adaptors of the tale in the late 19th and early 20th century. Farber directs her work with some provocation.  Certain images may induce thoughts of torture and abuse from news reports from our own time. Movement created by Ami Shulman removes the sexuality from Salomé’s climatic act yet still provides a very strong moment in the play.

Set and Costume Designer Susan Hilferty has created a stark set consisting mainly of chairs, crates, and other simple pieces that can be configured by the cast to represent different locales. Hilferty’s earth-toned costumes evoke a period feel tying us to the land under conquest.  Lighting Designer Donald Holder compliments Hilferty’s work creating a harsh and oppressive landscape.

The most beautiful aspect of this production is the music created by Composer Mark Bennett.  Beautifully sung by Lubana Al Quntar and Tamar Ilana, the score highlights the poignancy and bravery of Salomé’s deeds.

The story is narrated by the Nameless Woman (Olwen Fouèré), and unfolds primarily in reverse. Fouèré is the older Salomé who has weathered the consequences of her actions. The story she relates begins in the aftermath of Salomé’s deed and the story is then unveiled in a languorous manner. The flaw is that the pace of the production slows to such a point that the audience may begin to wonder when they will get to witness the main event. The production’s running time is only 1 hour and 40 minutes, yet a judicious trim in the opening scenes would be welcome.

How does Salomé (Nadine Malouf) fit into this political narrative? She is the Princess of Judea, trapped into an existence in which she is also not mistress of her own destiny.  Instead of the sexually charged seducer of Oscar Wilde, Farber’s Salomé is a woman victimized by her stepfather Herod’s incestuous advances. Salomé’s encounter with Jokanaan is a transformative one leading to her decision to ask for Jokanaan’s execution not out of frustrated lust or revenge. It is a political act that will spark the attempt to overthrow the Roman occupation.

One of the most provocative decisions by Farber as a playwright is to have Jokanaan (Ramzi Choukair) be the only character that does not speak English. This separates the Baptist from those who have acquiesced to Rome in exchange for the few freedoms of limited home rule and worship that Rome will permit.  Jokanaan is not tamed by Rome; he is separate yet free in his manner of speech, his manner of dress, and most important his incitements to revolution.

Uniformly the performances from the small ensemble of actors are good. T. Ryder Smith as Pilate is a man in command who genuinely believes his actions are for the good of the people he oppresses.  Yuval Boim’s Herod is appropriately loathsome. He is occasionally difficult to understand as his character’s frequently drunken state causes him to slur his words. Ramzi Choukair is a mesmerizing figure as the historical John the Baptist would have been. He is both fanatic and charismatic making quite a compelling performance.

Olwen Fouèré and Nadine Malouf who share the title role together create a whole woman. Malouf must evolve Salomé from despairing oppressed princess to inspired political player. Fouèré has the wisdom of time in her narrative. Together they equal a powerful woman.

Yaël Farber’s Salomé is a challenging play. It forces the audience to think about the suppression of women’s voices throughout historical narratives. From the nameless woman of the Bible to Oscar Wilde’s cold-hearted femme fatale the real Salomé has disappeared into the sands of time. Farber creates a different narrative that will make thoughtful audiences examine another possibility. Salomé…the catalyst of revolution.

Salomé plays through November 8, 2015 at The Shakespeare Theatre Company’s Landsburgh Theatre— 450 7th Street NW in Washington, DC. For tickets call the box office at (202) 547-1122 or purchase them online.

Review: As You Like It at Shakespeare Theatre Company