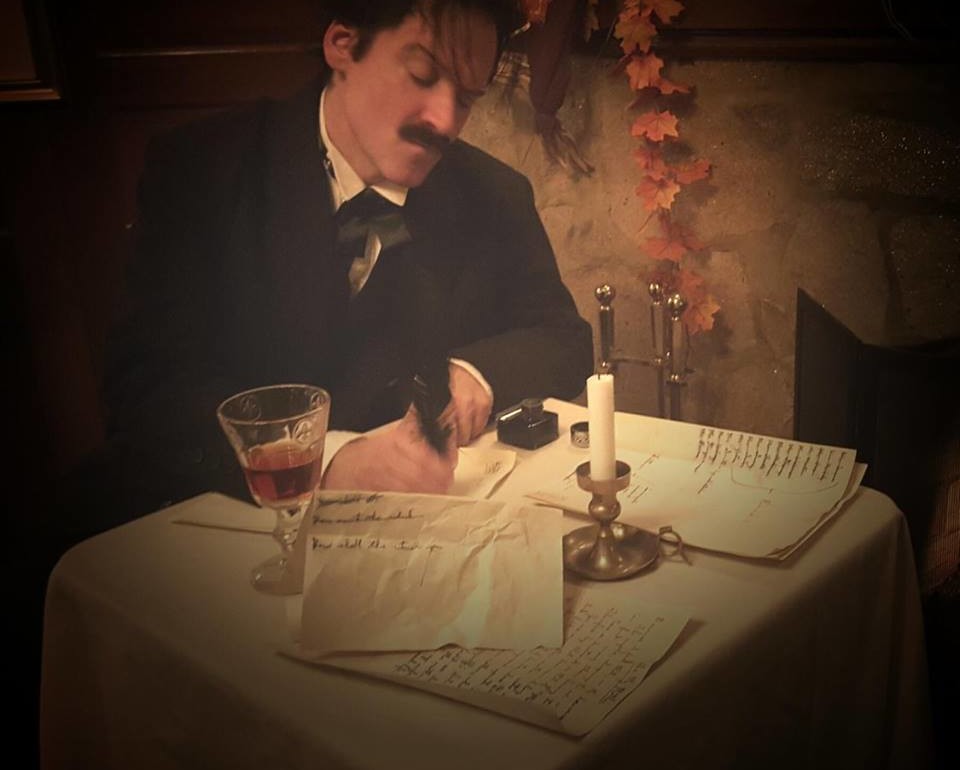 Worldly goods come and go, but exceptional theatre lasts beyond its ephemeral nature in the recesses of the mind of those that attended. Poe’s Last Stanza falls into the category of ephemeral theatrical brilliance that will linger on and be remembered by those who were fortunate enough to encounter the performance produced by Do or Die Mystery Productions. Written and Directed by C.J. Crowe, the piece is a highly immersive and interactive involvement that makes Edgar Allan Poe and all of his mysterious gloom highly accessible to everyman, highly amusing for those that have only encountered his shadowy solemnity, and highly astonishing for those that are seeking out new ways to experience the masterful author of The Raven this haunted holiday season.

A simple quiet evening with a prefix dinner served (for this evening at The Sunset Restaurant in Glen Burnie, MD) to delight the appetite before stimulating the mind and indulging the senses; that is how this enigmatic affair occurs when Edgar Allan Poe finds himself featured on the roster of the Do or Die Production team. Written and Directed by C.J. Crowe, Poe’s Last Stanza takes a delightful jaunt into the last evening of the infamous poet’s life, but not in the overtly macabre, drearily morose, and laboriously heavy vein that so many are used to when it comes to exploring the end of his life. Witty, clever, and remarkably engaging, Crowe’s work brings Edgar Allan Poe and all of his quirky charms to the audience directly, without artifice, without the veneer of the fourth wall, and without the density that often accompanies the complexities of the man.

Crowe’s writing of the script as impressive as her inclusion of open-formed audience interaction and improvisation. Developing a character that already exists in history as well as hundreds of incarnations from page to stage to screen is no small task but rather one that Crowe rises to with herculean efforts marking the piece as a smashing success. Allowing the subtle cheek and glib wit of Poe to be bantered about between the Barmaid and the audience, Crowe’s writing allows for the seldom seen side of the poet to be exposed. His rash and drunken nature takes on a more comic approach in Crowe’s work but this is all the more inviting for the audience. And the opportunities that arise for the audience to engage with both Poe and the Barmaid are plentiful and in good taste.

Including both The Raven and Annabel Lee, Crowe works in two of his most noted poems without boring the audience with the same tried and true recitation of these lengthy, albeit beautiful, works. Crowe’s ability to balance levity and sarcasm among the characters she has crafted juxtaposed against the lush imagery of Poe’s words is sublime and creates a well-rounded experience for any Poe enthusiast in attendance.

Taking on the role of the somewhat surly and sassy Barmaid, Lauren Engler holds her own against the inappropriately feisty Edgar Allan Poe. She engages with the audience in a fashion most becoming, being sure to seek out their assistance when it comes to a battle of the wits and words against the famous poet and her ability to so displays how remarkably quick she is on her feet as an improvisational performer. Engler matches exceptionally well with Josè de la Mar, playing Edgar Allan Poe, and has a fast-working chemistry with him that keeps their banter buoyant whilst prickling just below the surface in precise moments.

Josè de la Mar’s portrayal of Edgar Allan Poe is utterly delightful, not often words that one expresses when thinking of Edgar Allan Poe. While there are hints of the melancholy and subtle shifts of the madness, particularly at the end of the performance, de la Mar approaches Poe from the pleasantly inebriated state of things and makes his portrayal splendid for everyone’s enjoyment. Exuding a robust personality with a dry wit and striking sense of humor, de la Mar owns the graces of Poe’s audience interaction in a most amusing fashion. His approach to Poe humanizes him, makes him beautifully flawed, especially when showing his more roustabout mannerisms. Not without his poetic turn of phrase, de la Mar delivers a stirring and sweetly nostalgic rendition of Annabel Lee that settles with a chill across the room. Fully engaged in his bombastic reenactment of The Raven, de la Mar showcases his versatile performing abilities resulting in a fully developed approach to the master of darkness that is Edgar Allan Poe.

So I ask of you, will you be party to this madness? Or shall you miss one of Baltimore’s finest inclusions of Edgar Allan Poe in all his resplendently amusing glory and like the bird perched sitting dark and gory, eyes waiting still as stone above the cellar door, you too shall find yourself saying, as you’ve missed your chance at playing with Poe and his muse, you too shall quote— nevermore.

Poe’s Last Stanza runs on select evenings through November 1, 2015 at The Grand in Baltimore— 225 N. Charles Street in Baltimore, MD. Reservations are required and tickets are available for purchase by calling (443) 442- 3810 or by purchasing them online.

Poe’s Last Stanza will be returning to The Sunset Restaurant in Glen Burnie on January 19, 2016 for a special celebration of Edgar Allan Poe’s birthday. More information regarding this event can be found on the Do or Die Mystery website.

Review: The Mystery Krewe at Do or Die Mysteries

Review: Dead Ringer at Do or Die Mysteries
Close